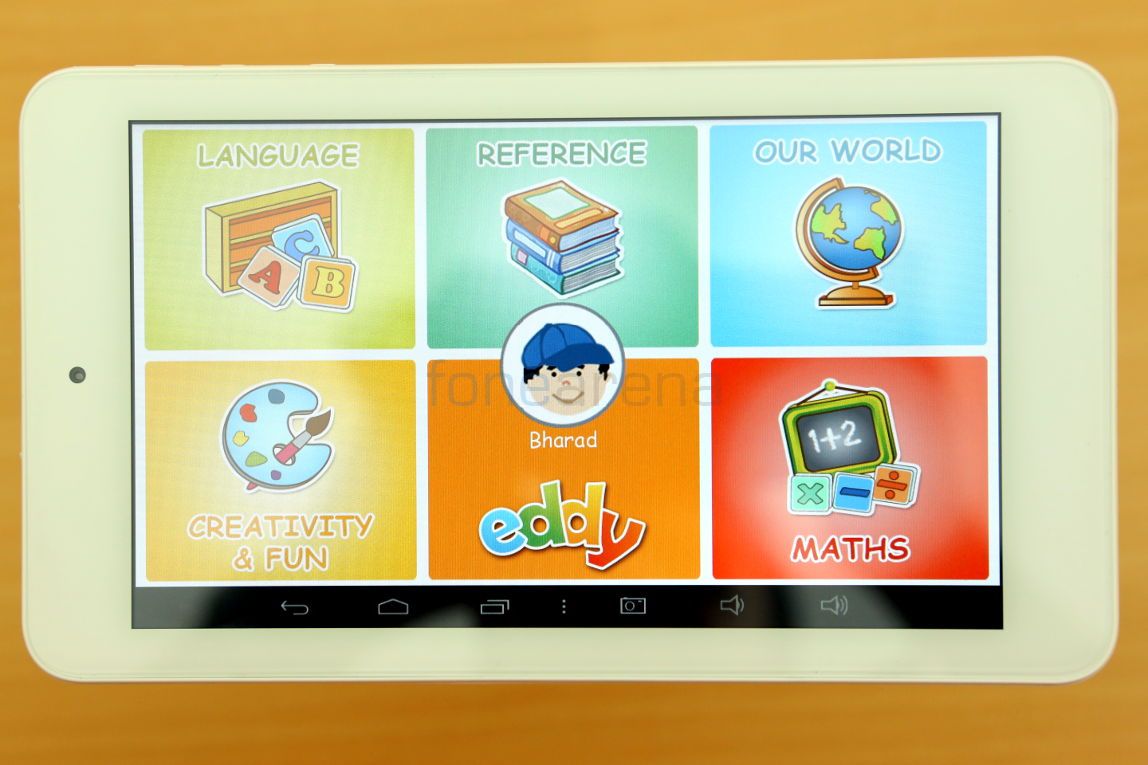 Metis Learning, an education start-up launched Eddy G70 kids tablet in September. The Android based learning tablet is priced at Rs 9,999 and is a successor of the Eddy tablet launched earlier in January this year. We have already seen the unboxing and photo gallery of the device. Now lets see the detailed review of the tablet. 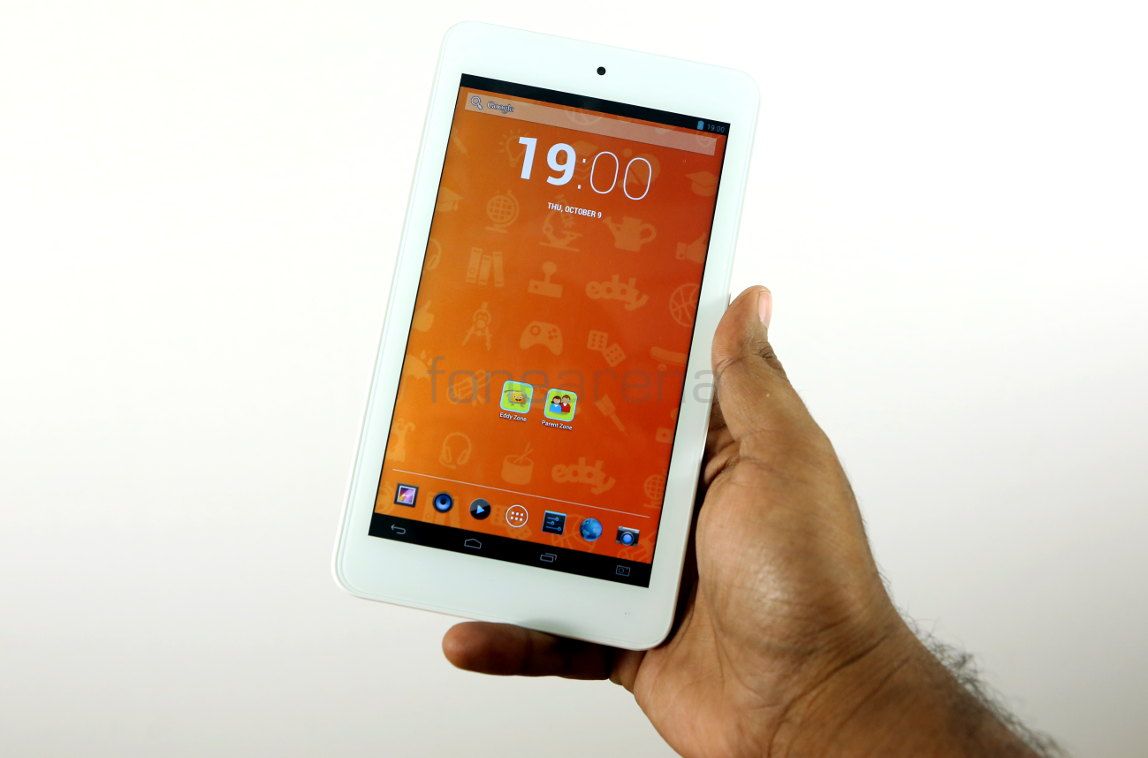 The Eddy G70 tablet has a scratch proof, impact resistant 7 inch (1024 x 600 pixels) multi-touch display similar to its predecessor. It has a bright and colorful display and comes with a UV protective layer to protect your kids eyesight. Viewing angles are good on the tablet which helps at the time of reading. However, the screen is quiet reflective and makes it difficult to use in sunlight. However, in the event of making the screen scratch proof, the tablet’s touch responsiveness is not the best. 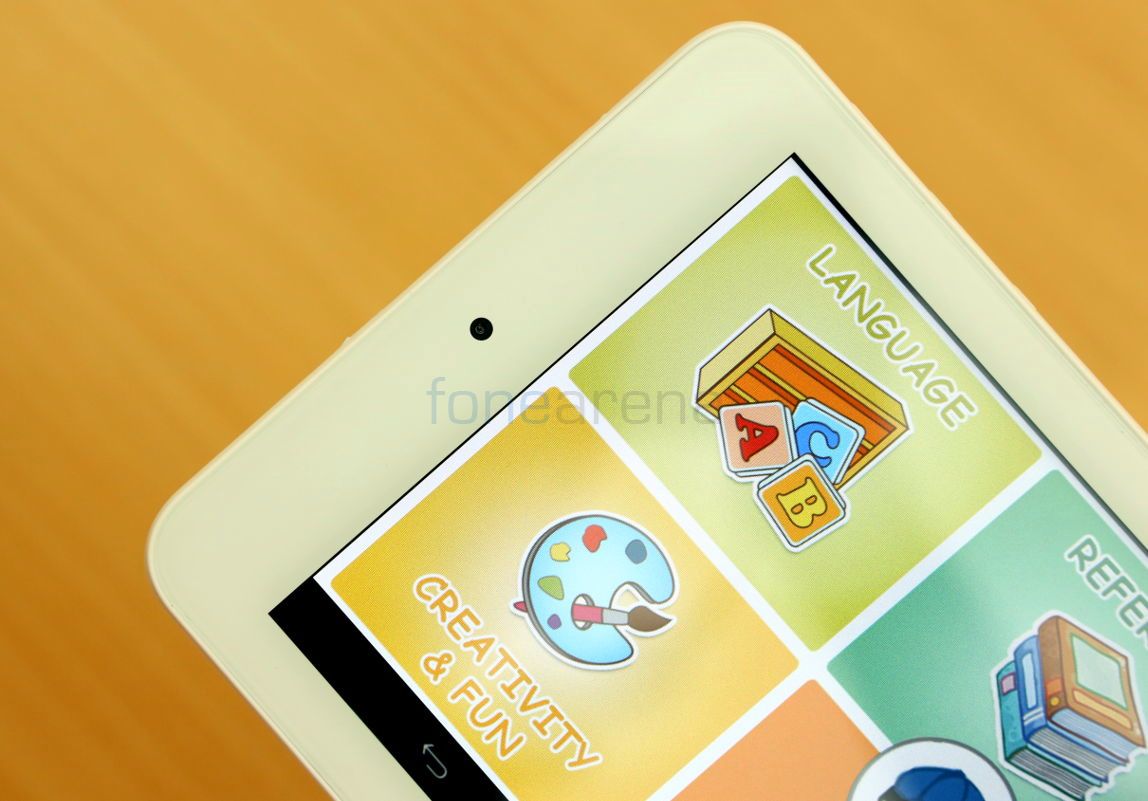 At the front, the tablet has a 2MP camera which is average resulting in basic usage. 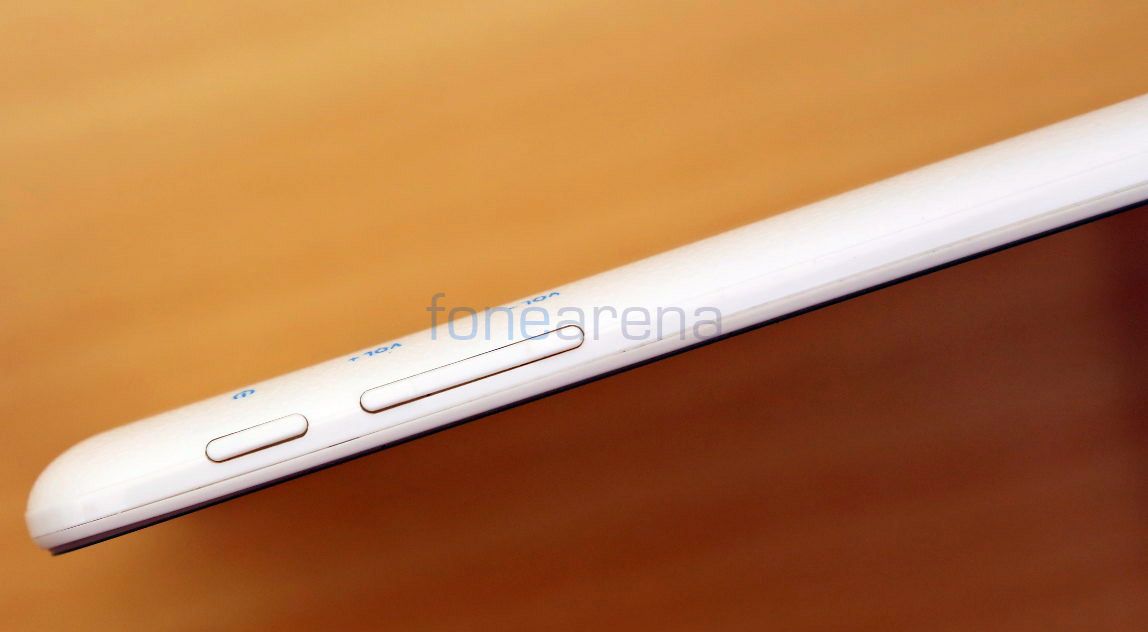 Micro USB port, mic and 3.5mm audio jack is seen at the top of the device. 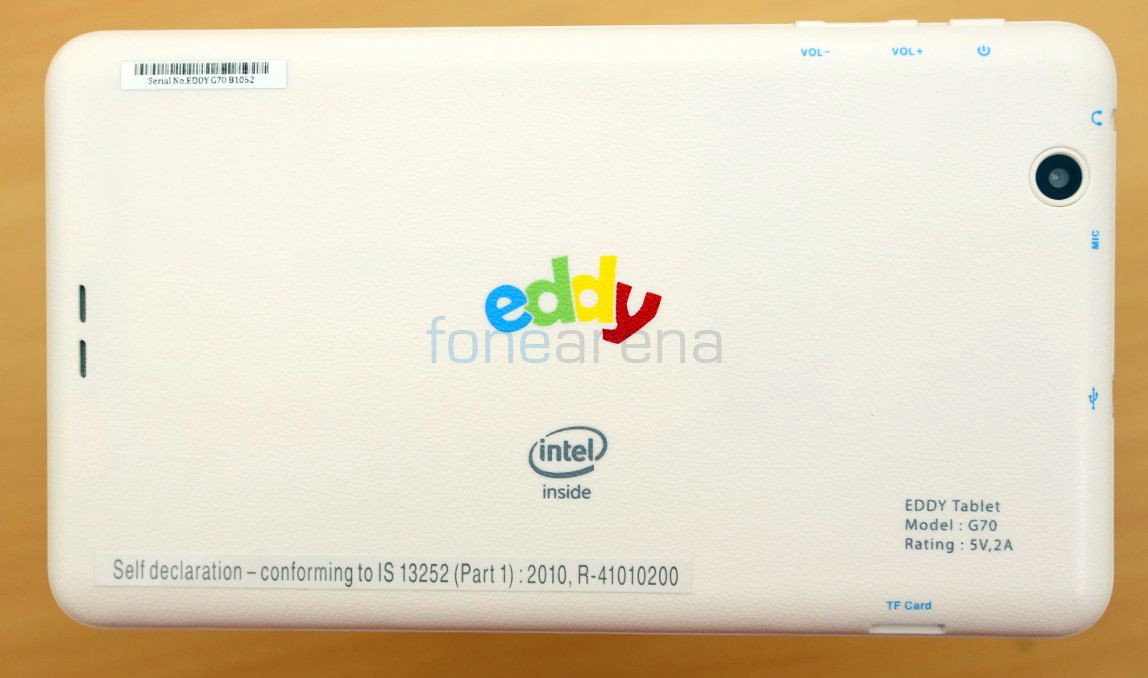 At the back the tablet has a 2-megapixel camera at the top end and loud-speaker at the bottom end. The entire tablet is encompassed in a plastic body and has the Eddy brand at the center followed by the Intel logo. 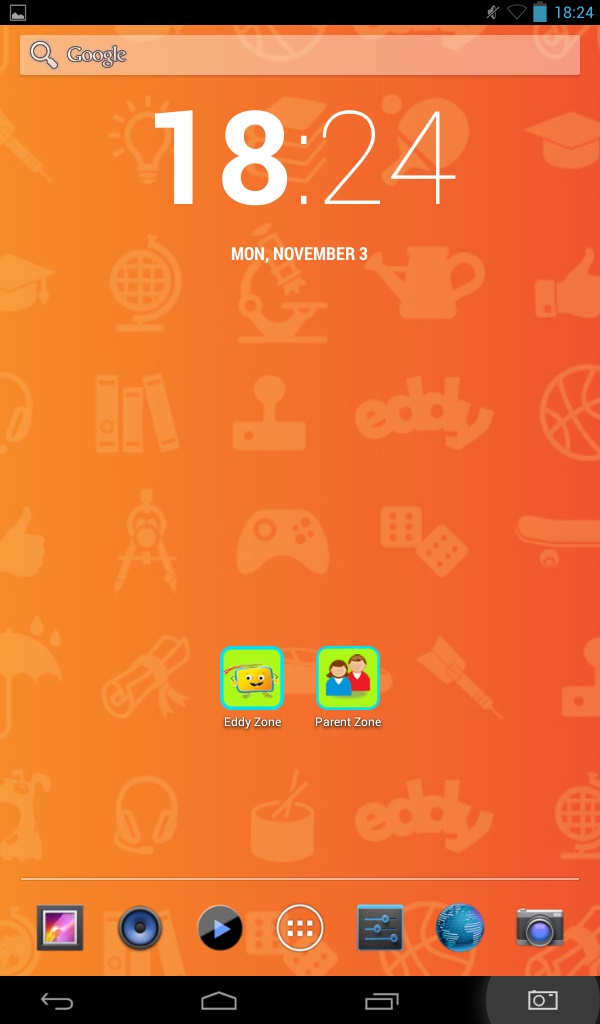 The Eddy tablet runs on Android 4.2.2 with an overlay of the proprietary Athena OS. It is divided into 2 Zones – an Eddy Zone which is specially designed for kids and Parents Zone which lets you set up the Eddy for your kid. 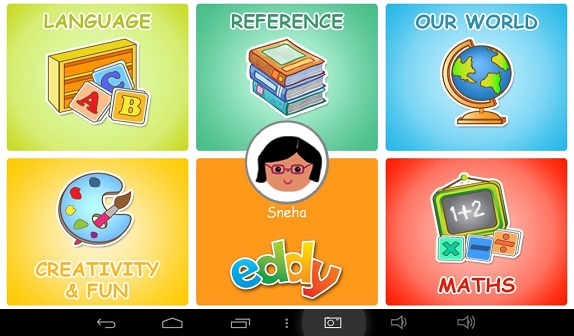 As soon as you enter the Eddy Zone we can see that the Home Screen of the tablet is divided into five different sections such as Language, Reference, Our World, Creativity & Fun and Maths. Each category has an array of apps that can be easily added and deleted. In case of Language you will see games that are aimed at increasing vocabulary and grammar of the kid along with popular children’s classics like Robinson Crusoe, Gulliver’s Travels and so on.

Our World has quizzes and trivias about Geography, Atlas, Google Sky Map and others. Creativity and Fun has popular games like Candy Crush, Cut the Rope along with apps related to arts, music, painting etc. Maths as the name suggests has apps that provide geometry, algebra quests along with simple addition, multiplications and much more. Finally there is Reference which has a WordWeb and Maxthon Kid Safe browser, Encyclopedia and Wikipedia. 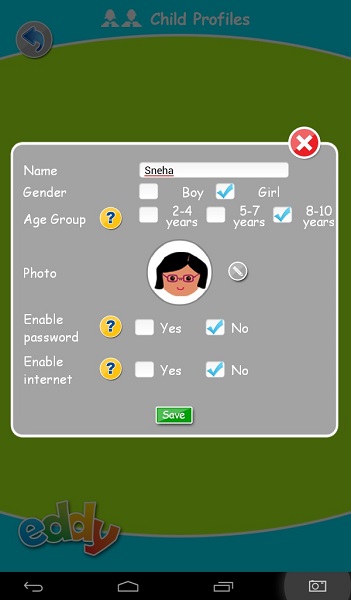 Parents can add up to three profiles for the tablet which are divided into age brackets viz, 2-4 years, 5-7 years and 8-10 years. At the time of configuration, you have to enter your child’s age which will unlock close to 70 apps on the tablet. As your child grows up, other apps start getting unlocked on the tablet. Also, three kids can use the tablet at a time as each will have a different profile. 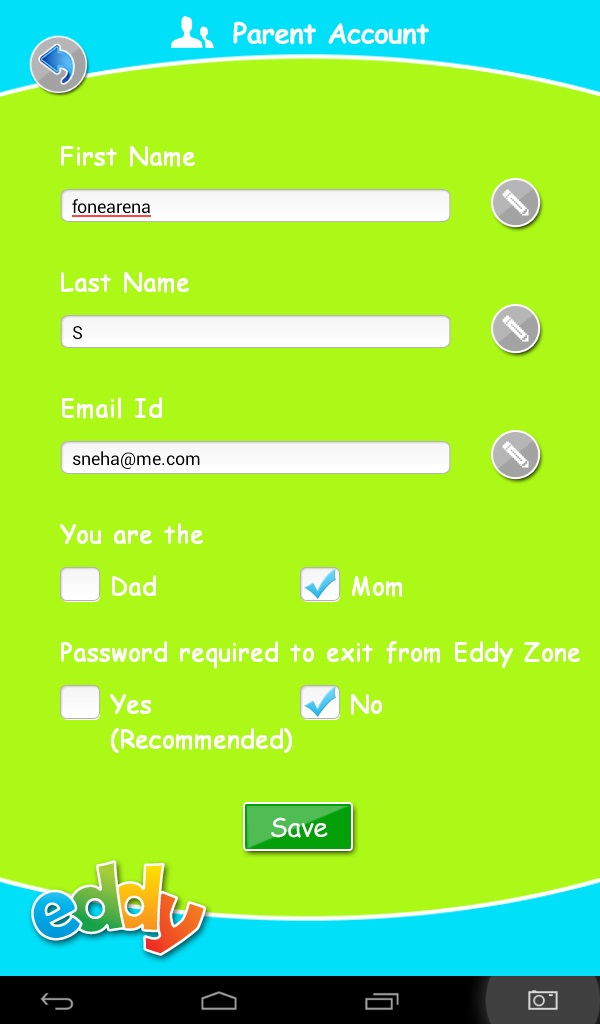 Eddy comes with educator-selected learning content, a kid-safe environment and high-quality hardware. It also has a kid-safe browser, which only permits access to reliable websites. Parents can set time limits for their children to play on Eddy. They can also decide which subjects their children should focus on. 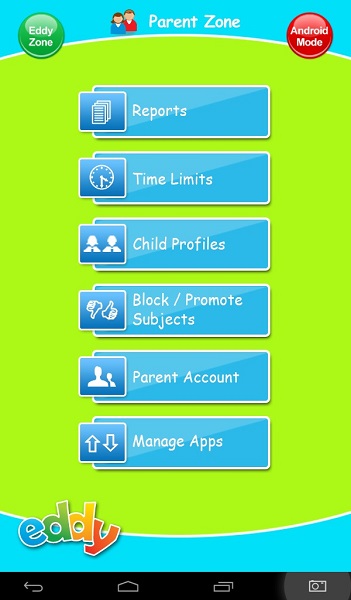 The Parent Zone has all the menus from where you can set up the Eddy for your kids as per the requirement. They can block or promote any subject as needed. On the right side we can see an option for Android Mode that turns the Eddy into a normal Android tablet, while the Eddy Zone will take you to the kids sections. 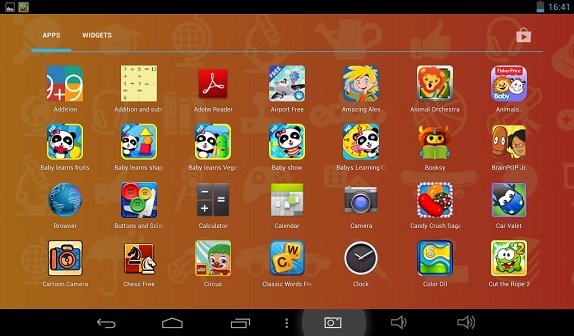 All the apps that are segregated in different sections in the Eddy Zone are seen in the Android Mode like a normal tablet. Eddy has over 160 pre-installed learning apps for kids that are selected from various educators. The tablet has learning content that comes from Google’s top education app developers including Intellijoy, Tipitap, iStoryBooks and others. 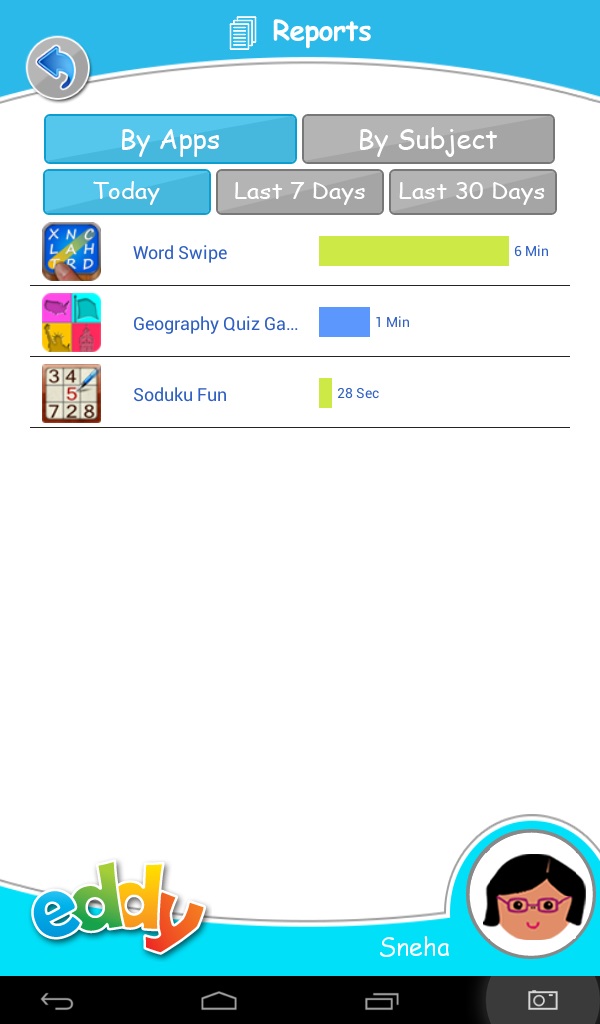 The Eddy tablet lets you monitor your kids daily activities by apps and subjects for the present day, last 7 days and last 30 days. It even provides you with the duration spent by your kids on a single app. 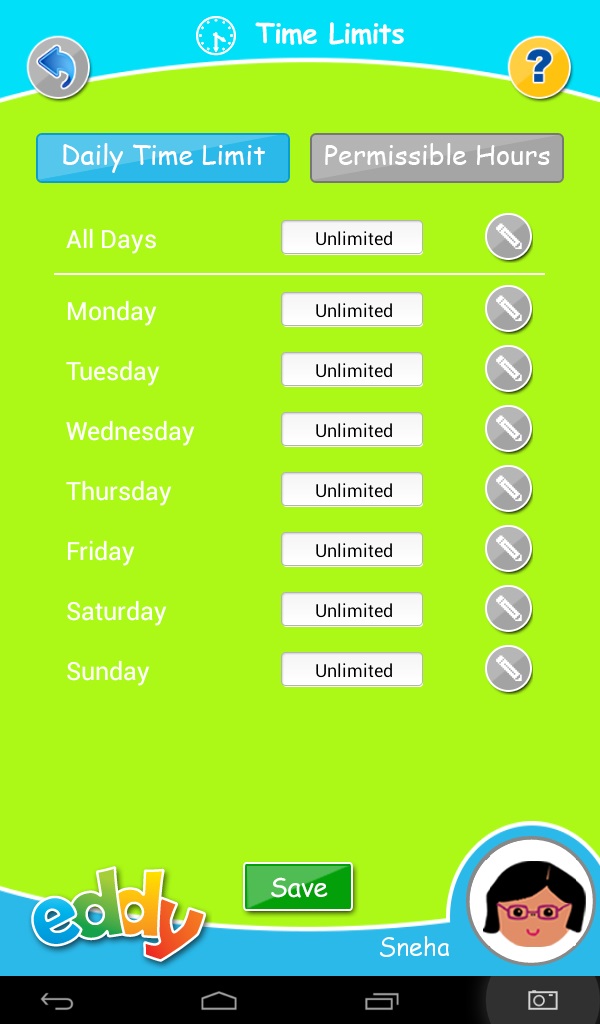 The Daily Time Limit option enables parents to control the time your kid spends on the tablet. After setting a certain time, kids will not be able to access the tablet once the set time is over. Moving further, the Permissible Hours option allows parents to set the hours of the day during which the child can handle the tablet. 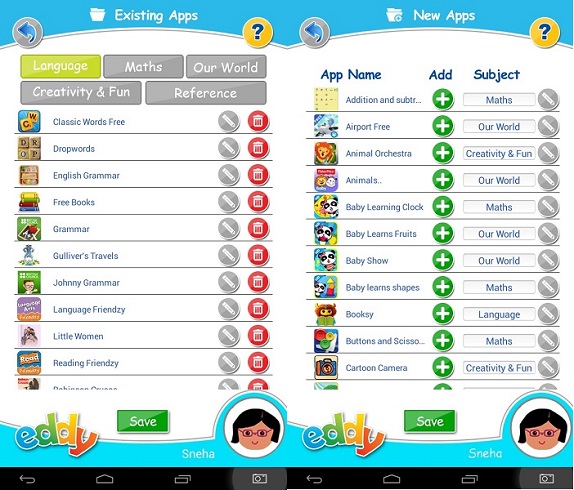 The Eddy tablet supports 3G (via dongle), WiFi 802.11 b/g/n, mini HDMI out, USB OTG. Downloading apps and browsing over WiFi is smooth and hassle free. Bluetooth sharing of files is also fluent between Eddy and other device. 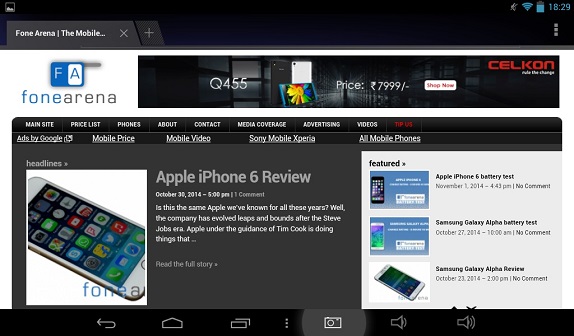 The Eddy tablet has 2MP front and 2MP back camera without flash. As expected the camera quality is poor and images appeared to be grainy and blur. However, since this is a kids tablet camera quality will not be a problem still Eddy does manage to serve the basic purpose of photo taking. Check out couple of camera samples (click to view the full resolution image). 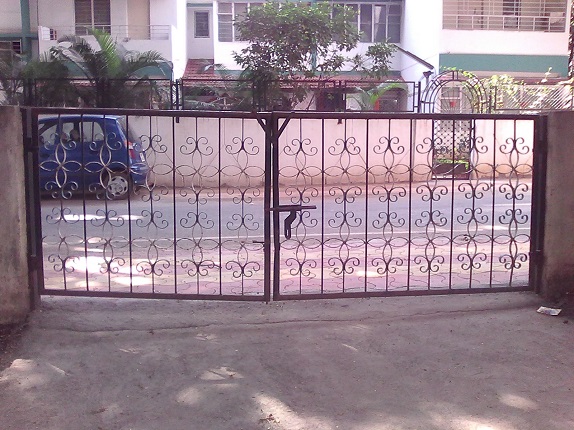 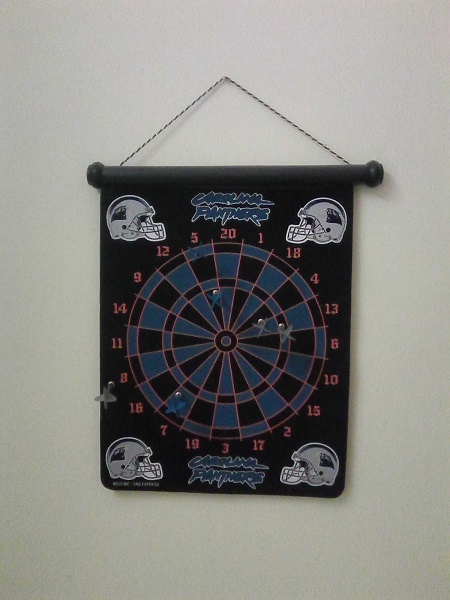 The touch on the tablet is not smooth and fluid and mostly requires more than one click to open apps. It is a bit frustrating for adults as we are used to light and smooth touch screens on our devices. But in case of a kid, we think they will not mind one or two more attempts. The Athena interface layer on the Android is colorful and attractive with bright colors making it suitable for kids. Each section has different color coded system with attractive typography and playful icons.

The Eddy tablet is powered by Intel Atom Processor Z2520 and has 1GB RAM,16GB internal memory that can be expanded up to 32GB with microSD. Moving on to the performance part, the tablet did lag few times during our testing period. However, gaming on the tablet is a good experience as it is one of the important element for kids in terms of entertainment. Speaker volume on the tablet could have been a bit louder but it is enough for a couple of interactive games.

The tablet has a 2800mAh battery which is average and drains quickly. On a full recharge with gaming, book reading and general use the tablet lasts for about 7-8 hours. However, the Eddy G70 can be charged via micro USB port unlike the original Eddy that required a pin charger.

At a time when gadgets have become an integral part of a child’s daily routine, the Eddy tablet does come out as a good option. Rather than giving kids your own tablet for a couple of games like Angry Birds or Subway Surfers, parents can actually make them do some productive work on the Eddy G70. However, we feel that the Rs 9,999 price tag is a bit expensive considering the hardware features which are mostly on the lower end including the older version of Android (4.2.2). Nonetheless, the Eddy G 70 is definitely a learning tool for kids that will keep them engaged and entertained at the same time.