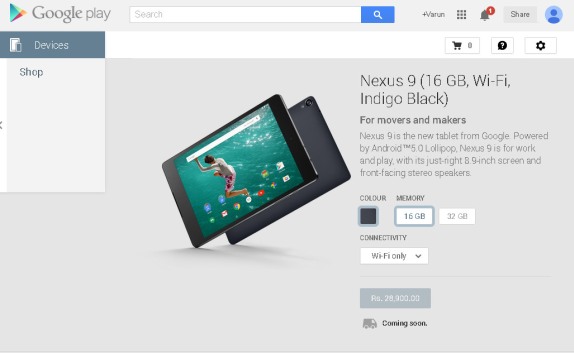 In case you are looking forward to buying the latest Nexus tablet from Google in India, we have some good news to share. We just spotted the Google Nexus 9 as coming soon on the India Play Store and the price for the 16GB Wi-Fi only version is listed as Rs.28900 which is a good deal considering the US pricing is $399 but taxes and shipping will bring the price to roughly about Rs.27000 and duties could end up making it even costlier.  It seems like the 32GB Wi-Fi only version will not be coming to India. The Google Nexus 9 is made my HTC and packs a 8.9 inch display and is powered by a Nvidia Tegra K1 chip and runs on the latest version of Android 5.0 Lollipop.

The Nexus 9 LTE version is also coming to India with the 32GB model as the only option. The pricing is rather steep at Rs.44900 though which is noticeably higher than the US pricing of $599+taxes and shipping. 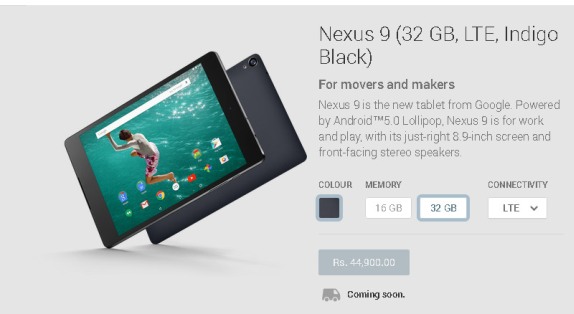 Although the Nexus 9 comes in the 3 colours -Indigo Black,Lunar White,Sand only the Black version seems to be making its way to India at least on the Google Play Store. HTC might also be selling the device directly in the country and marks the re-entry of the Taiwanese handset maker into the tablet space after a long gap.