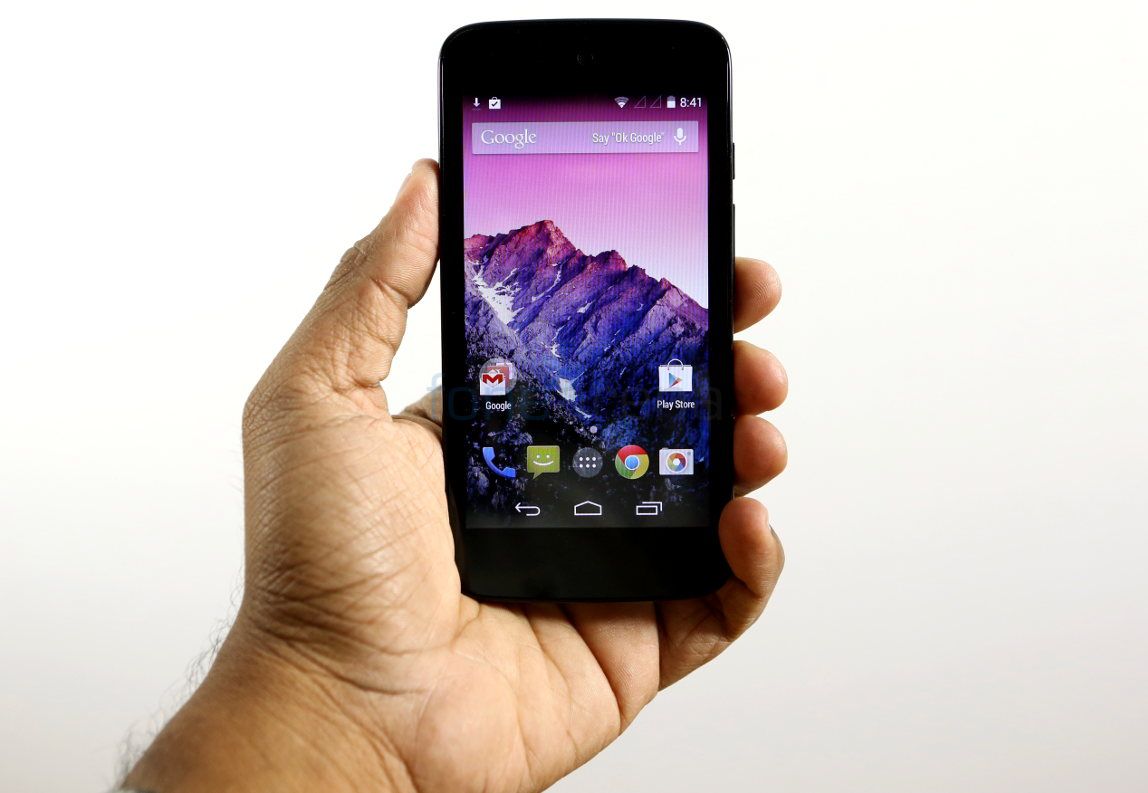 We unboxed the smartphone few weeks back, check out the Karbonn Sparkle V unboxing. 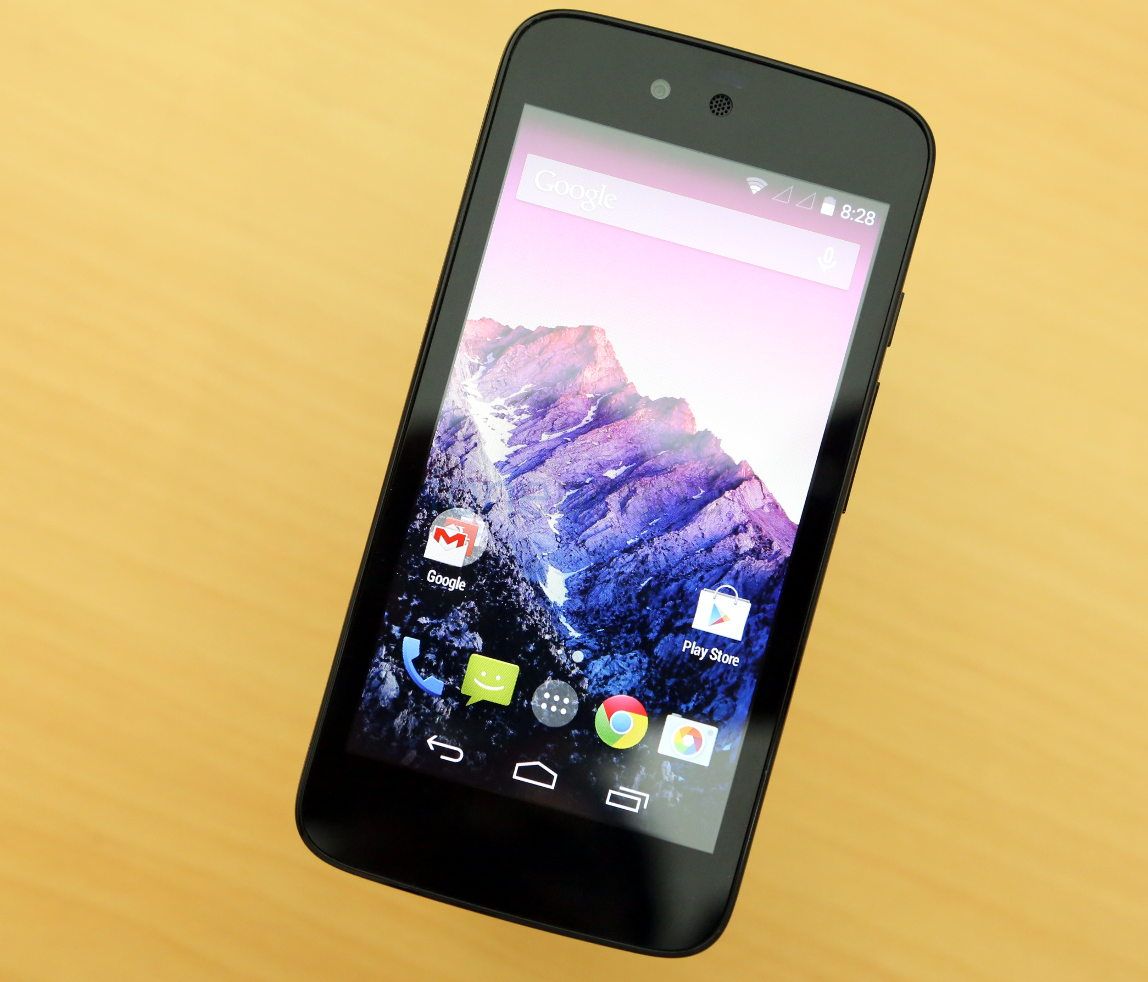 All the Android One smartphones have a 4.5-inch FWVGA display at a resolution of 854 x 480 pixels at a pixel density of about 218 ppi. The resolution is less compared to the Moto E, which has 256 ppi screen. The display is bright and the sunlight legibility is decent, but not the best. It doesn’t have a scratch resistant glass that is present in other budget smartphones such as Moto E, Zenfone 4 and the Redmi 1S. Since the display is glossy it is prone to fingerprints and attracts dust easily. 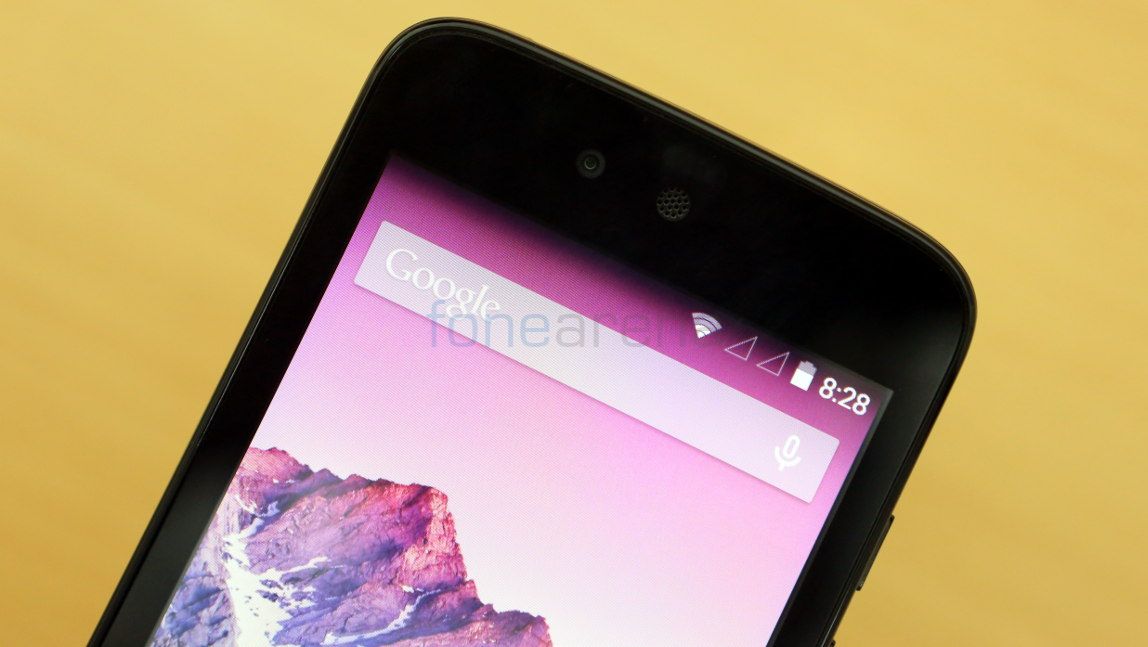 It has a 2-megapixel front-facing camera that can record videos at 720p HD resolution. The camera is good for selfies and video calls in bright conditions. It has a circular earpiece and the usual set of proximity and ambient light sensors above the display. There is a LED notification light next to the earpiece which glows in green and red colors, but it doesn’t light up when the phone is charging, so it is not visible. 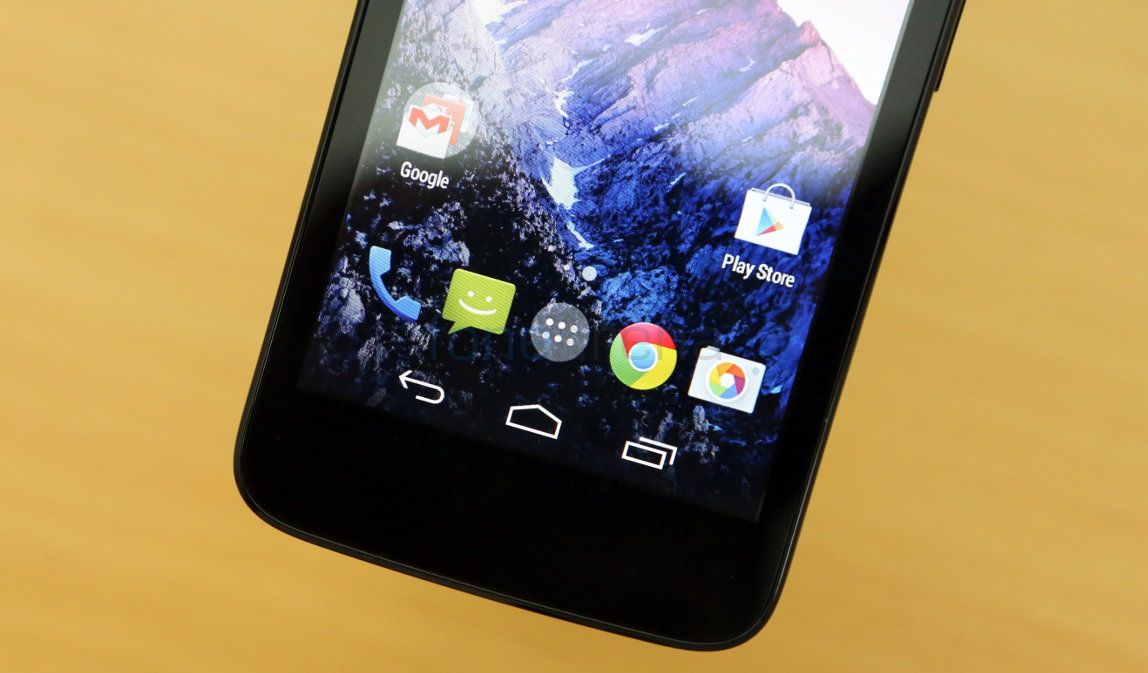 It has on-screen buttons below the display, but the device is not compact compared to Moto G since it has huge bezel around the display. 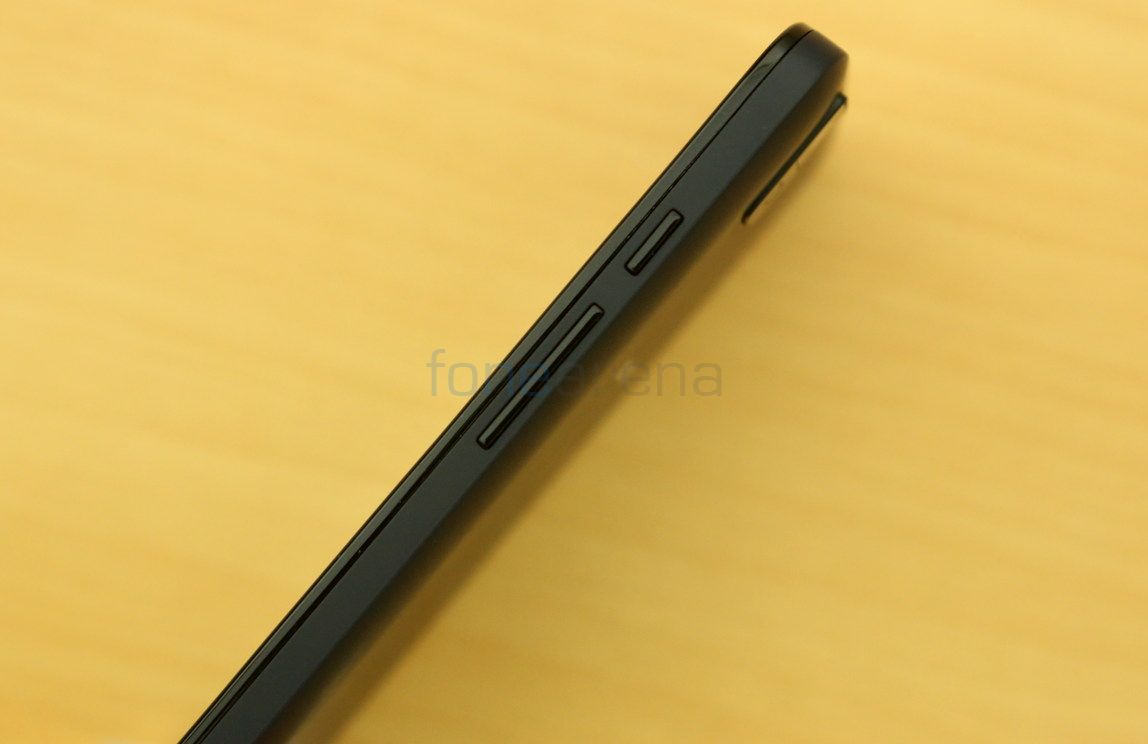 The power button and the volume rockers that have shiny finish are attached to the back cover, unlike the Spice Dream UNO. The 3.5mm audio jack is present on the top and the micro USB slot is present on the bottom. It is about 10.4mm thick, which makes it thicker than the other two Android One smartphones. It weighs 136 grams, almost similar to other Android One smartphones. 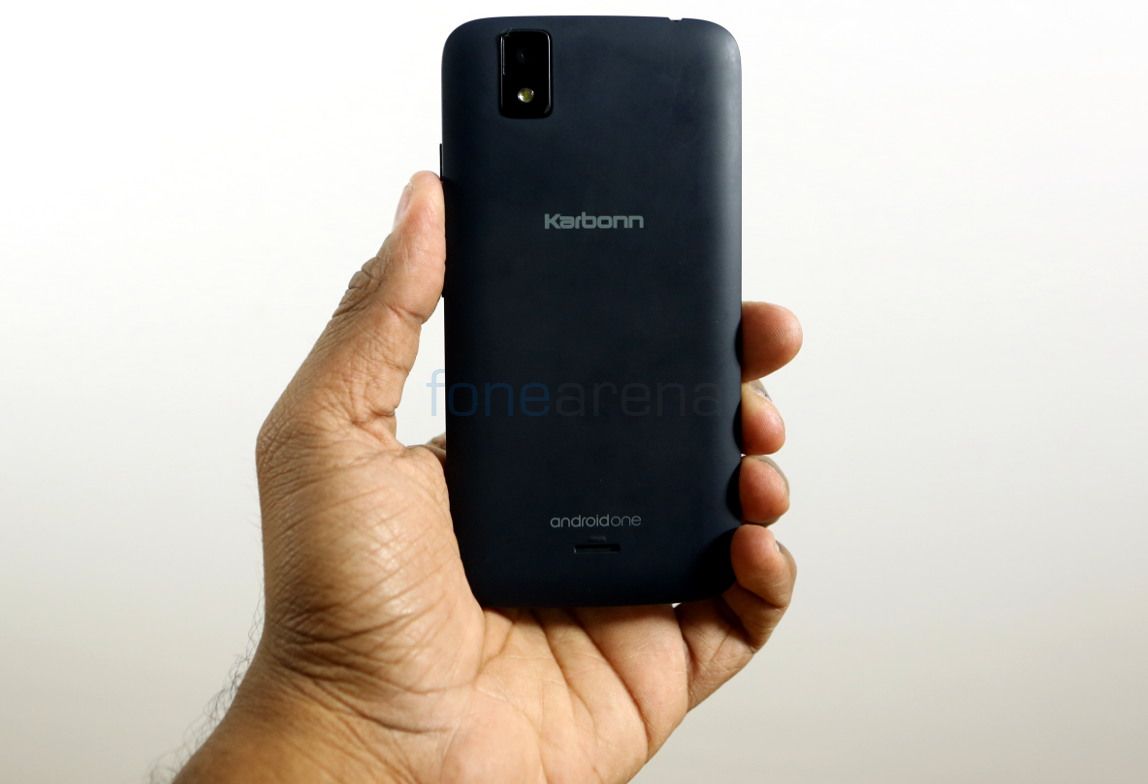 The plastic back cover is smooth, but it doesn’t have matte finish like the other two Android One smartphones. The smooth plastic back is slippery. 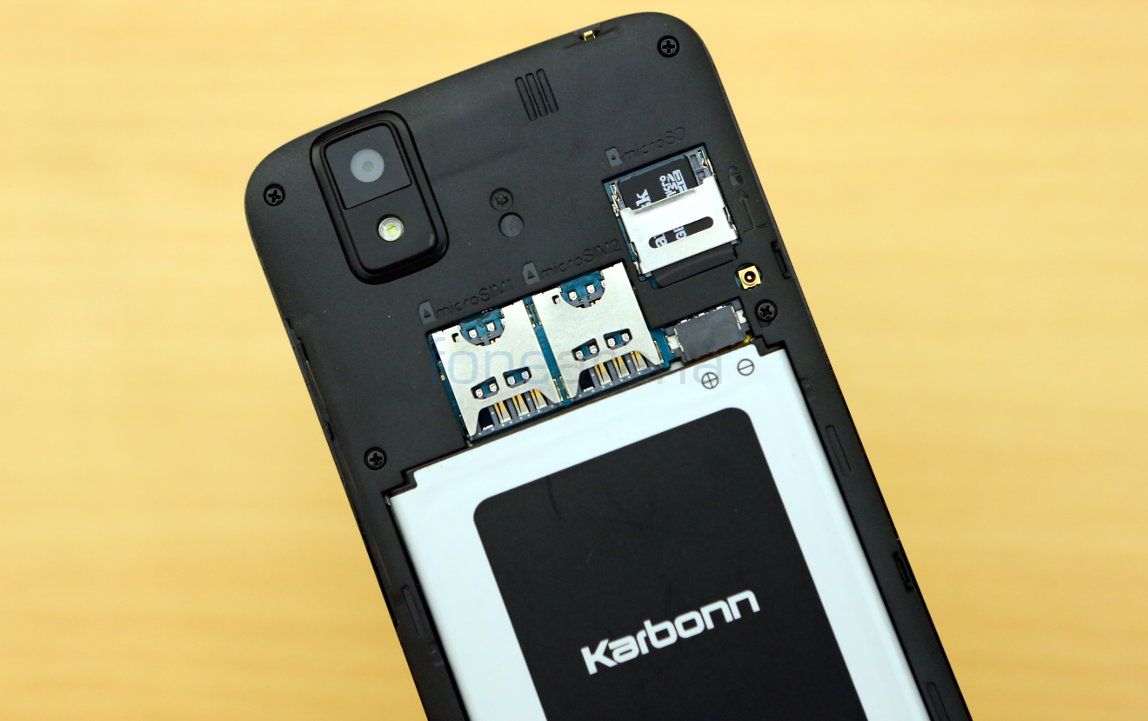 It has two micro SIM slots, microSD card slot and 1700mAh removable battery hidden under the back cover. There is a shiny patch around the camera which is prone to scratches. 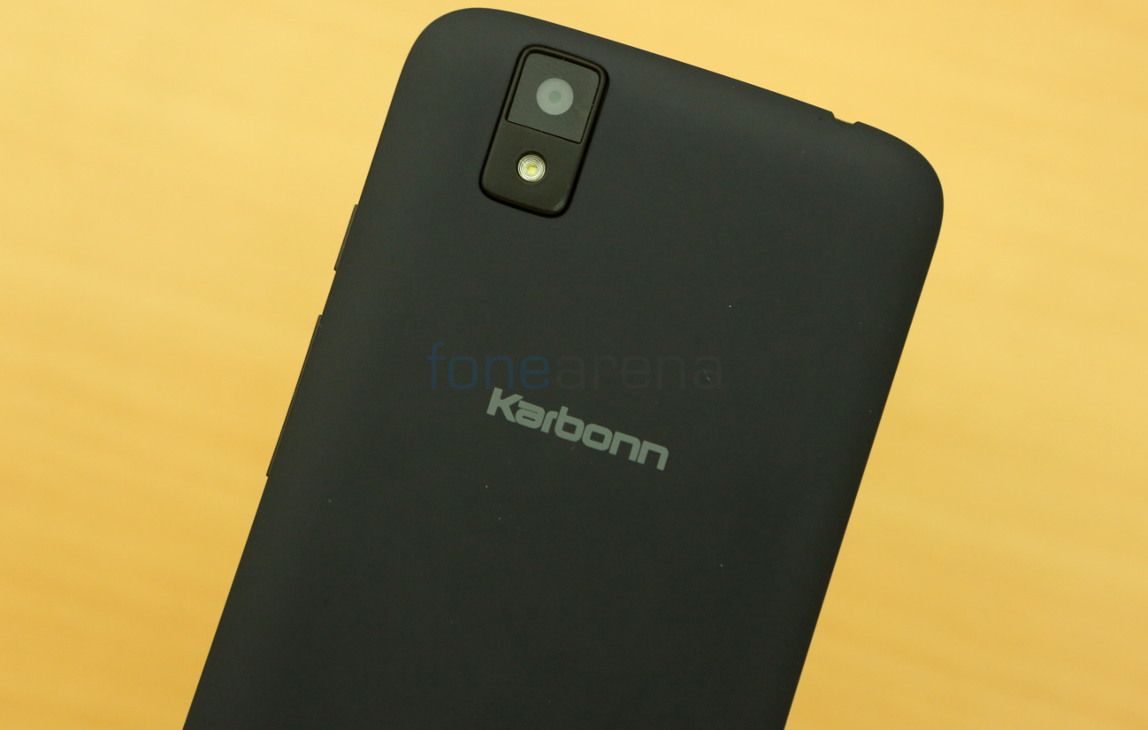 Coming to the camera, the 5-megapixel camera is decent, but it doesn’t offer much details. It can be operated only when the microSD card is inserted. Daylight shots and macro shots are good, but some shots seem dull if there is not enough light. Low-light shots are full of noise, but the LED flash makes the shots better in such conditions. Overall it’s just an average camera. Google Camera is the default camera app in the smartphone, which has Photo Sphere, Lens Blur and Panorama features. Check out some camera samples below (Click the images to view the full resolution image). 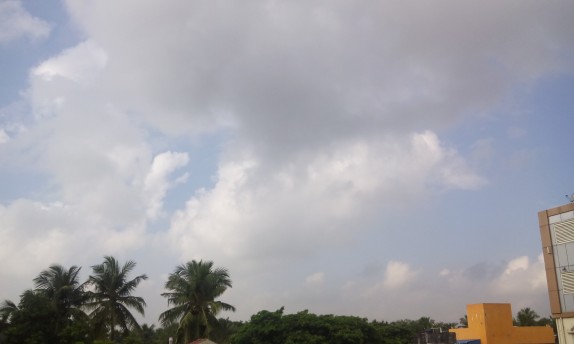 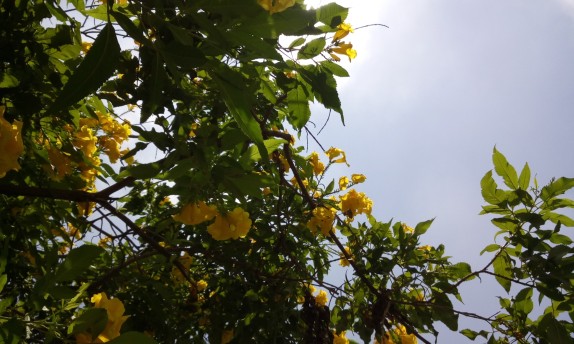 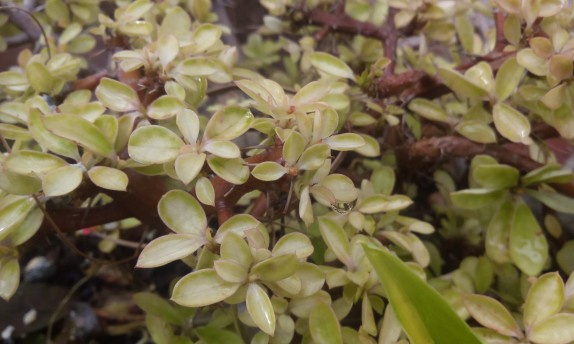 It can record videos at 1080p resolution. The video doesn’t have much details and the audio is not crisp since it lacks a secondary microphone. Here is the video sample. 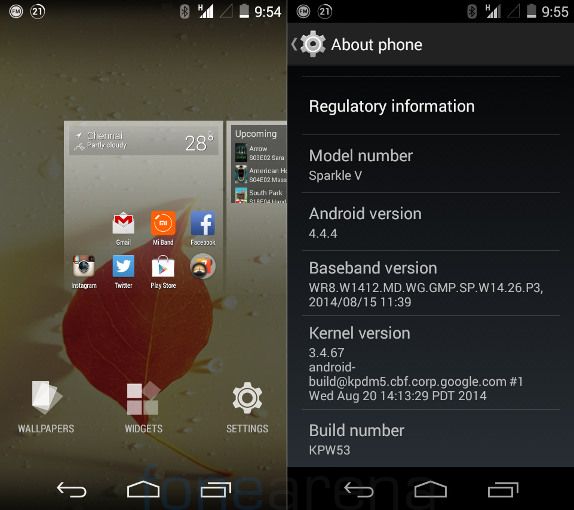 Coming to the software, it runs on stock Android 4.4.4, just like the Nexus devices, and the Google Now launcher is the default launcher, so you can swipe to the left to view Google Now. ‘Ok Google’ voice command works on all the home screens. UI is pretty smooth without any lags since it has been highly optimized. Since Google pushes out updates directly for all these Android One smartphones directly, you don’t have to worry about software updates. Google has also promised to update these devices to upcoming Android 5.0 and also promised to provide updates for up to two years. 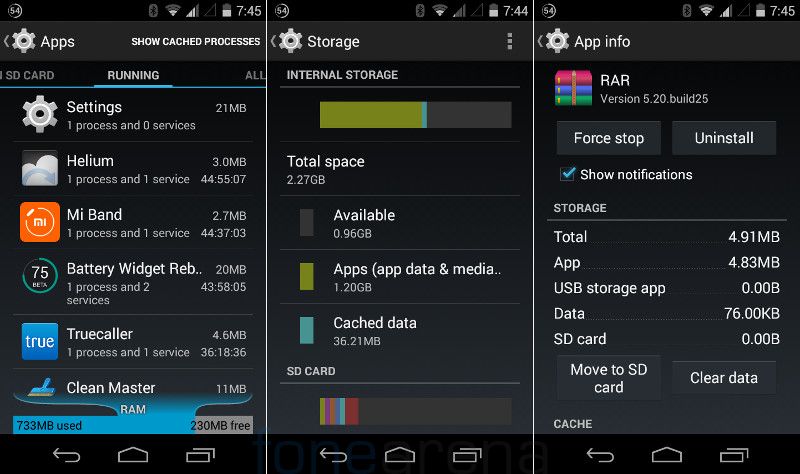 Out of 1GB of RAM, you get 963 MB of usable RAM. About 552 MB of RAM is free when the phone is idle, with just the default apps running in the background. Otherwise it has more than 200MB of RAM when some apps are running in the background. Out of 4GB of internal storage you get just 2.27GB of usable storage. The internal storage is locked, and cannot be accessed even from the PC.

You can move compatible apps to the SD card once you insert one. Even though it doesn’t have a separate option to set the SD card as the default write disk, large games are directly installed to the SD card, so you don’t have to worry about the internal memory getting full. 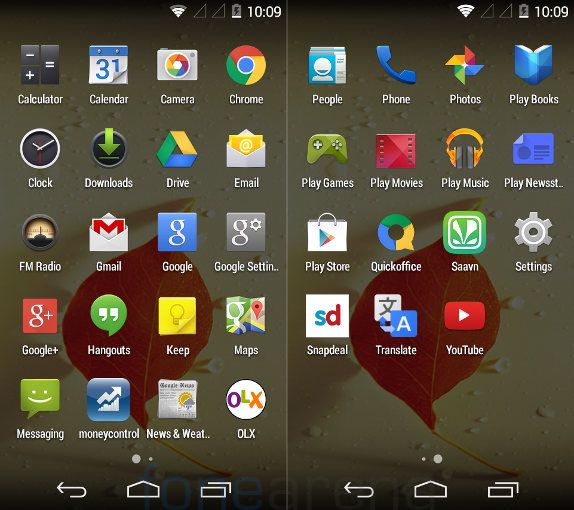 Google already announced at the I/O that the Android One would have Play Auto installs, which is pre-installation of apps on the phone. The Karbonn Sparkle V comes with moneycontrol, OLX, Saavn and of course Snapdeal, apart from the usual set of Google Apps. This has more number of third-party apps compared to other two Android One smartphones It has support for Hindi language input. 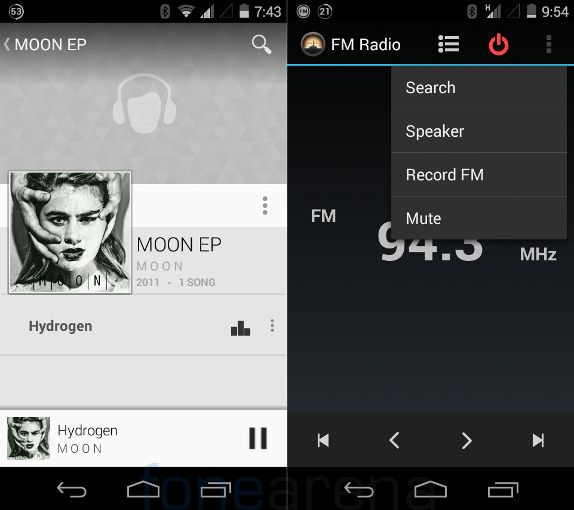 The Play Music is the default music player and it can play a range of audio formats. Audio from the bundled earphones could be better and the loudspeaker output is just average. FM Radio has the standard UI seen on MediaTek handsets and comes with auto search, RDS and recording. The default video player can play full HD 1080p videos smoothly. 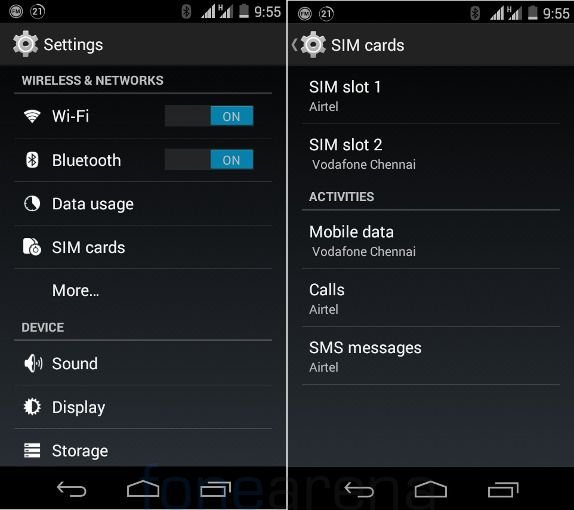 It has SIM manager option that lets you set a default SIM. Both the SIMs support 3G, and you can switch either SIMs for data, calls and SMS. It takes some time to switch the between SIMs for different activities. Connectivity features include, 3G HSPA+, Wi-Fi 802.11 b/g/n, Bluetooth 4.0 with A2DP and GPS. It has support for wireless display, but lacks USB on-the-go (OTG) support. All the Android One smartphones come free data for pre-paid Airtel customers. This includes 100 MB of free 3G data per month for 6 months for software updates and 200MB per month for app downloads or updates. This data cannot be used for normal browsing. 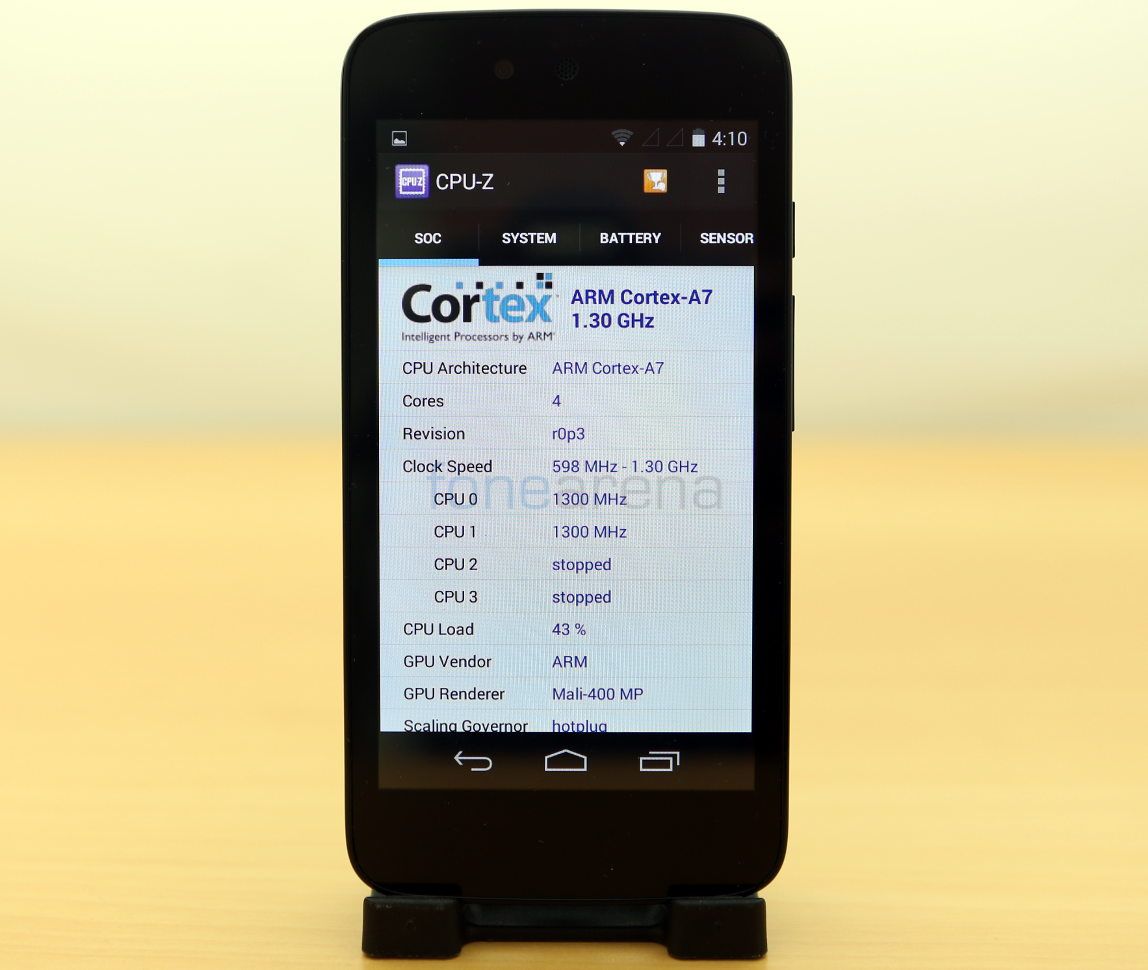 It is powered by a 1.3 GHz quad-core MediaTek MT6582 processor with Mali 400 GPU. Overall performance is pretty good. Google has optimized the software so that it doesn’t lag a bit when switching between the homscreens or any other tasks. Thanks to 1GB of RAM, multitasking was smooth too. Check out some synthetic benchmark charts below. 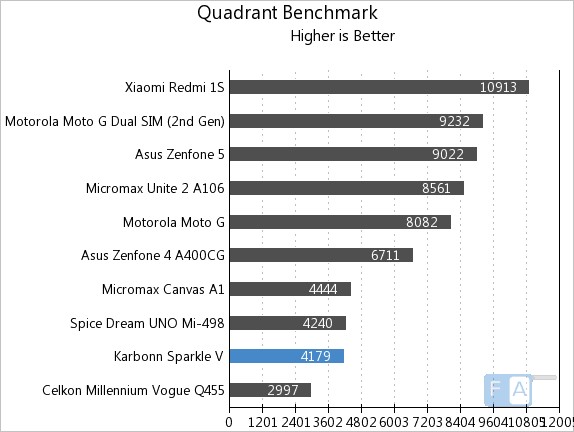 It managed to score 4179 points in the Quadrant benchmark. 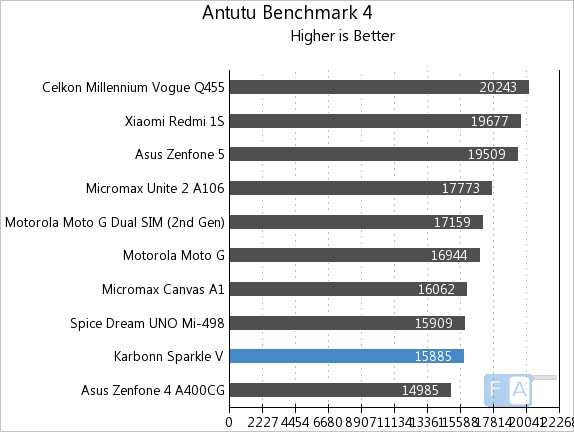 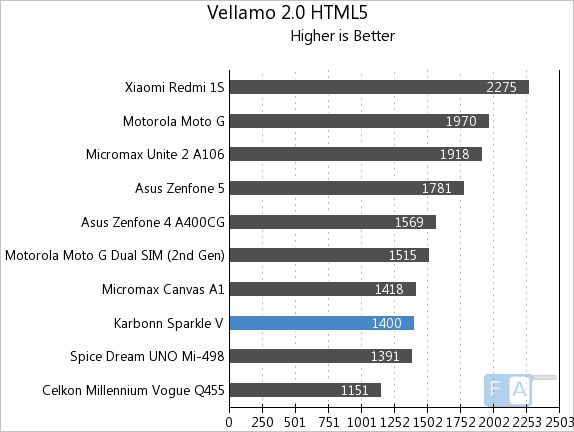 It managed to score 1400 points in the Vellamo 2 HTML 5 browser benchmark. Check out the complete set of Karbonn Sparkle V benchmarks here.

We tested several games on the device, which were decent. Some games did face occasional lags in the gameplay and the graphics was not the best. Check out the gaming review below, to know more about the gaming performance of the smartphone. 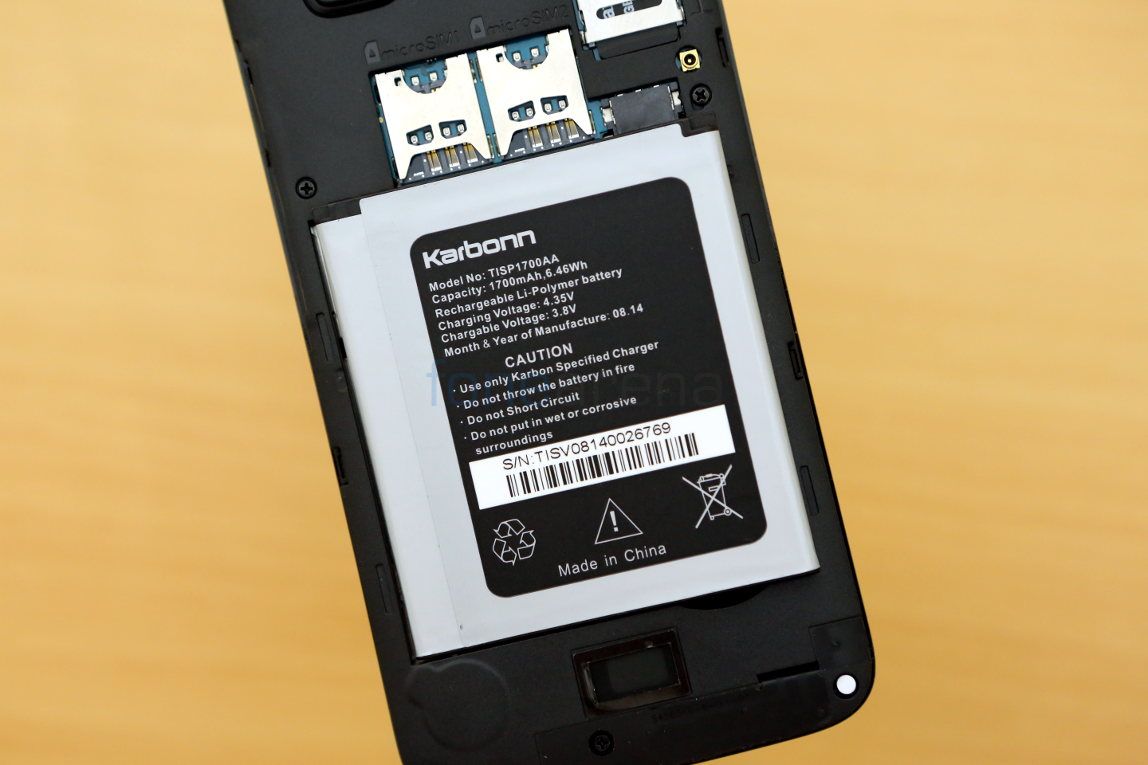 Coming to the battery life, the 1700mAh battery lasts for a day with average use and more than a day with minimal use, but on heavy use such as 3G with both the SIM cards functioning and intensive gaming, it’ll last less than a day.

Overall, the Karbonn Sparkle V is a decent budget smartphone running stock Android in this price range. It doesn’t have matte back like the Canvas A1 or the Spice Dream UNO and comes with more pre-loaded third-party apps. At a new price tag of Rs. 5,999, if you can compromise on the display, camera and the battery life for the lag-free performance and the pure Android experience, go for it.