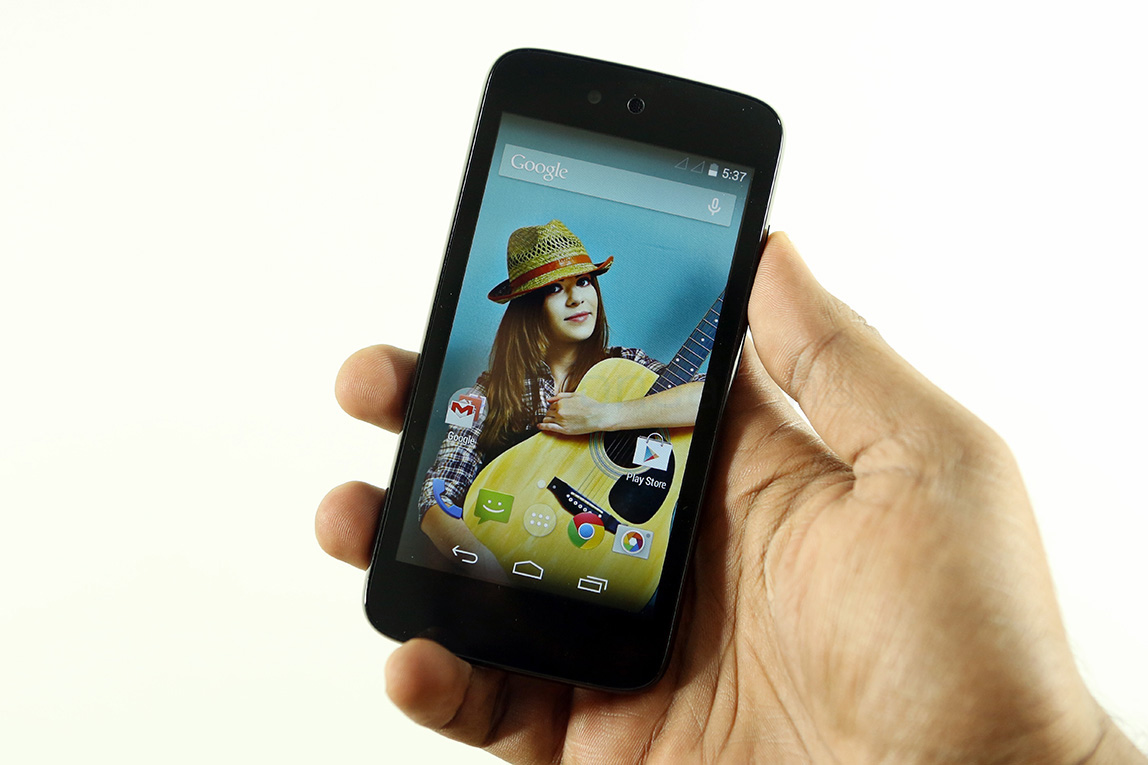 Google announced the Android One program back in June at the Google I/O to provide low-cost Android smartphones running on stock Android, with software updates handled by Google. It also released a reference hardware and announced Micromax, Karbonn and Spice as the first members of the program. Spice launched the Dream UNO Mi-498, the company’s first Android One smartphone priced at Rs. 6,299 at an event in India last month. We already brought you the unboxing, benchmarks and the photo gallery of the smartphone, here is the complete review. 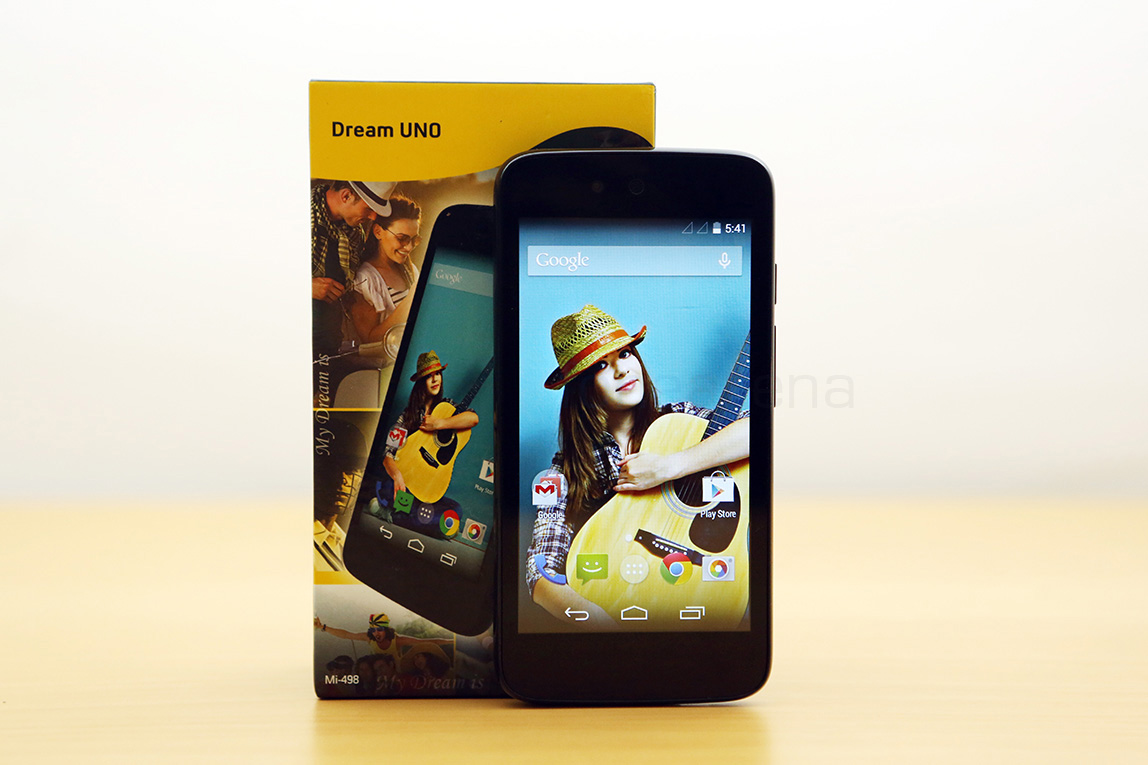 We unboxed the Spice Dream UNO recently, check out the unboxing below. 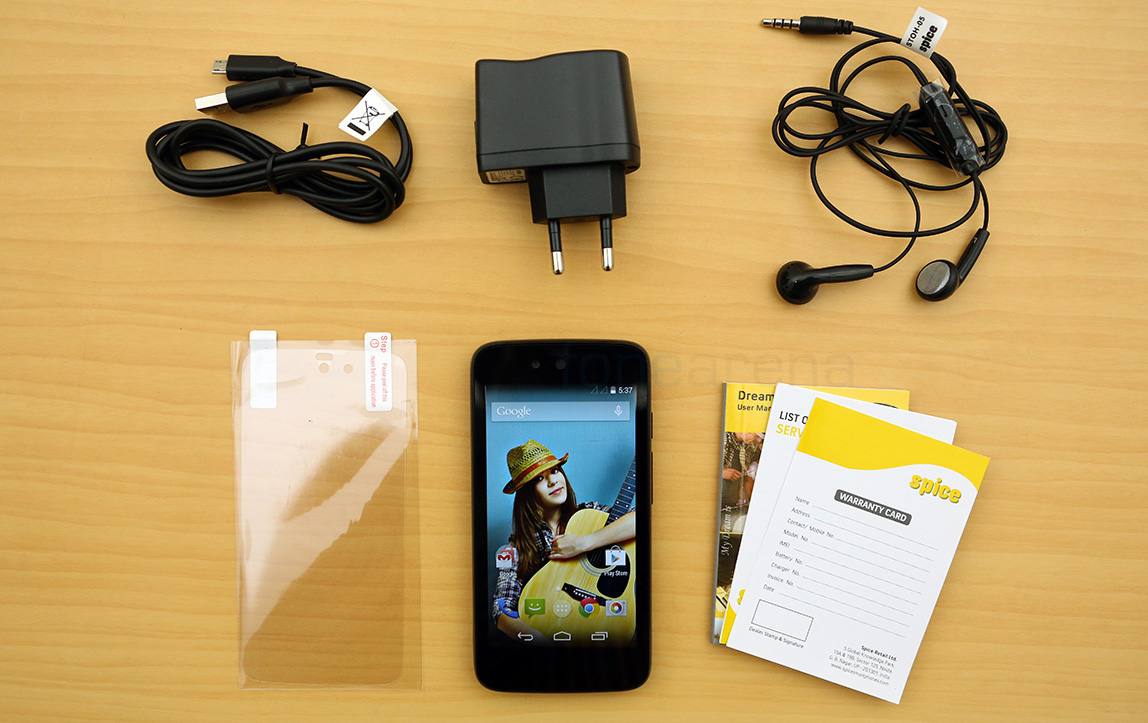 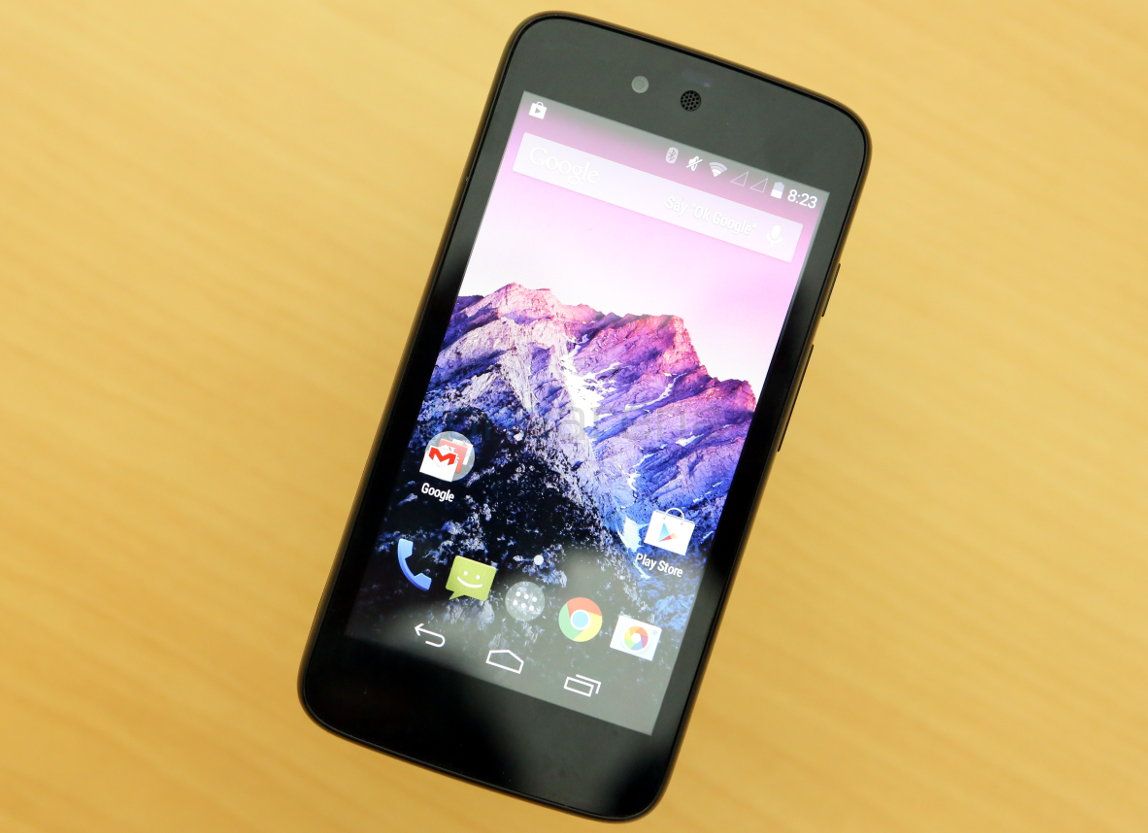 Google already revealed that the Android One reference design would come with a 4.5-inch screen. The Dream UNO and other Android One smartphones have a 4.5-inch FWVGA display at a resolution of 854 x 480 pixels at a pixel density of about 218 ppi. The resolution is less compared to the Moto E, which has 256 ppi screen. The display is bright, in fact the Spice Dream UNO’s display is brighter compared to other two Android One smartphones. The sunlight legibility is decent, but not the best. It doesn’t have a scratch resistant glass that is present in Moto E, Zenfone 4 and the Xiaomi Redmi 1S. 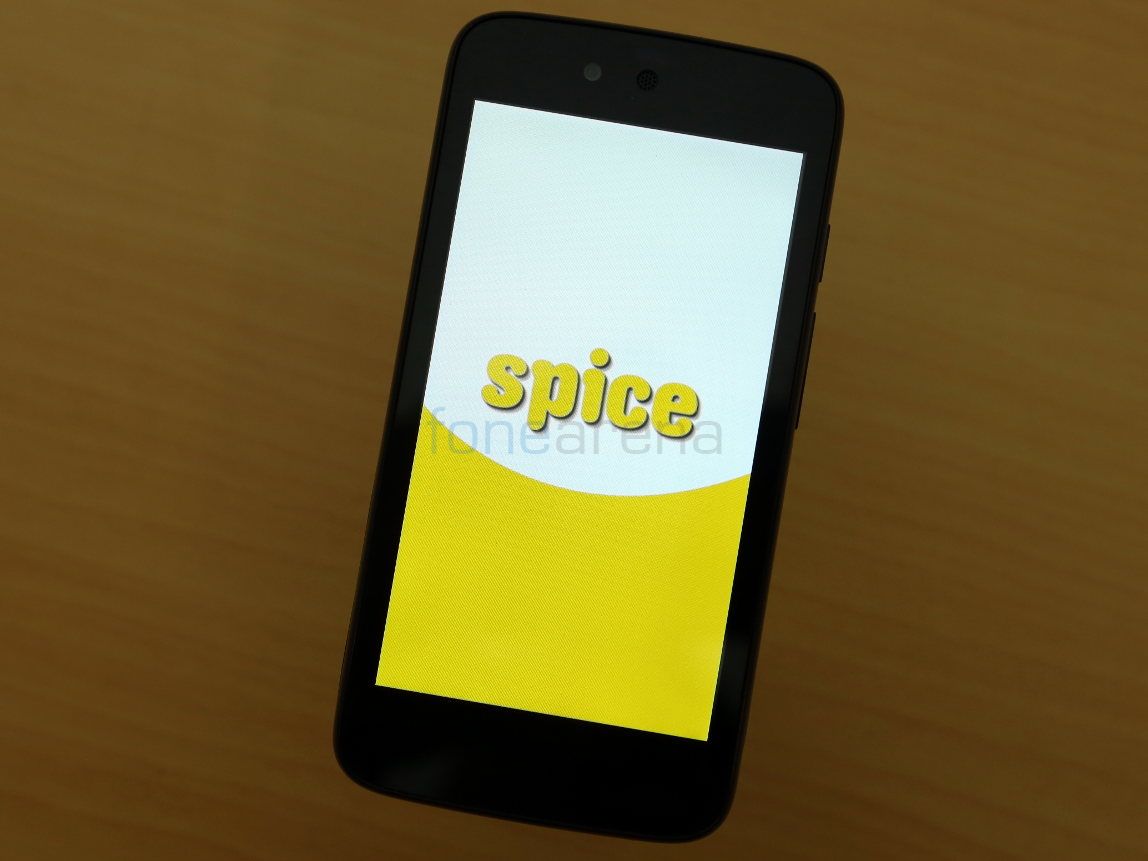 Since the display is glossy it is prone to fingerprints and attracts dust easily. Even though it is bright, the display is not the best for watching videos in bright conditions since it is glossy. Spice sells a flip cover for the smartphone separately on Flipkart for Rs. 399 that would protect the screen from scratches and would also protect the device from accidental falls. 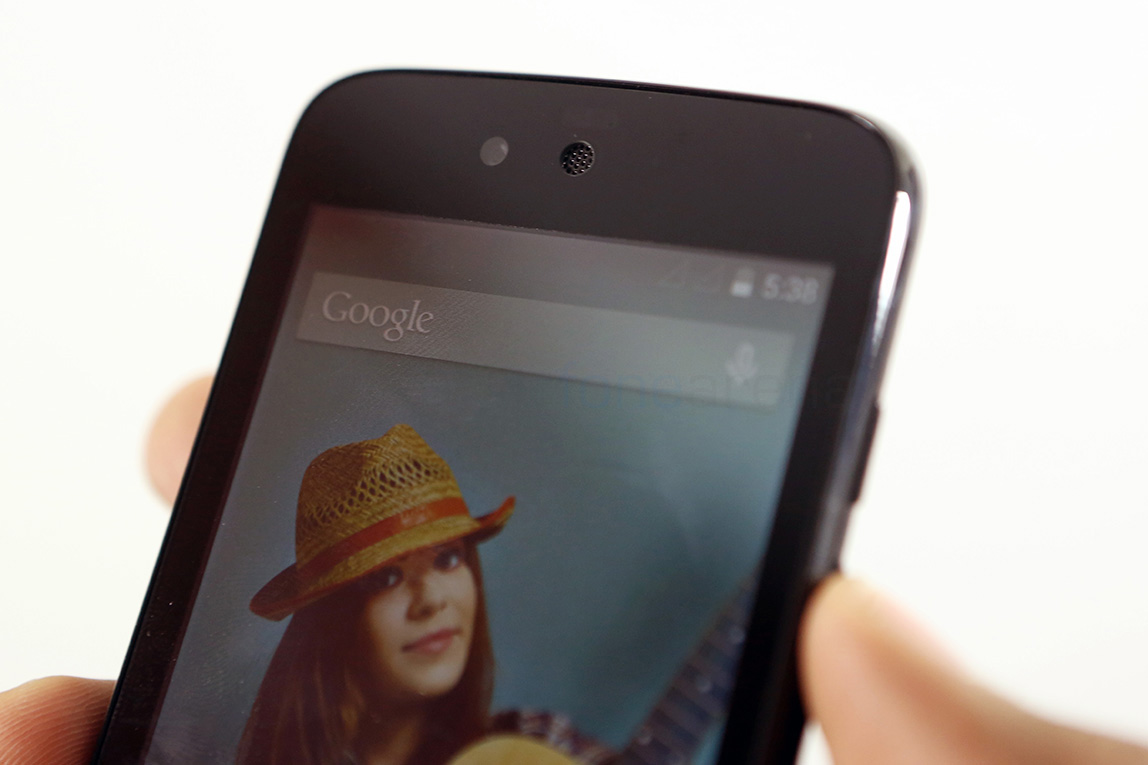 It has a 2-megapixel front-facing camera that can record videos at 720p HD resolution. The camerais good for selfies and video calls. It has a circular earpiece and the usual set of proximity and ambient light sensors above the display. There is a LED notification light next to the earpiece. It glows in green and red colors, but it doesn’t light up when the phone is charging. 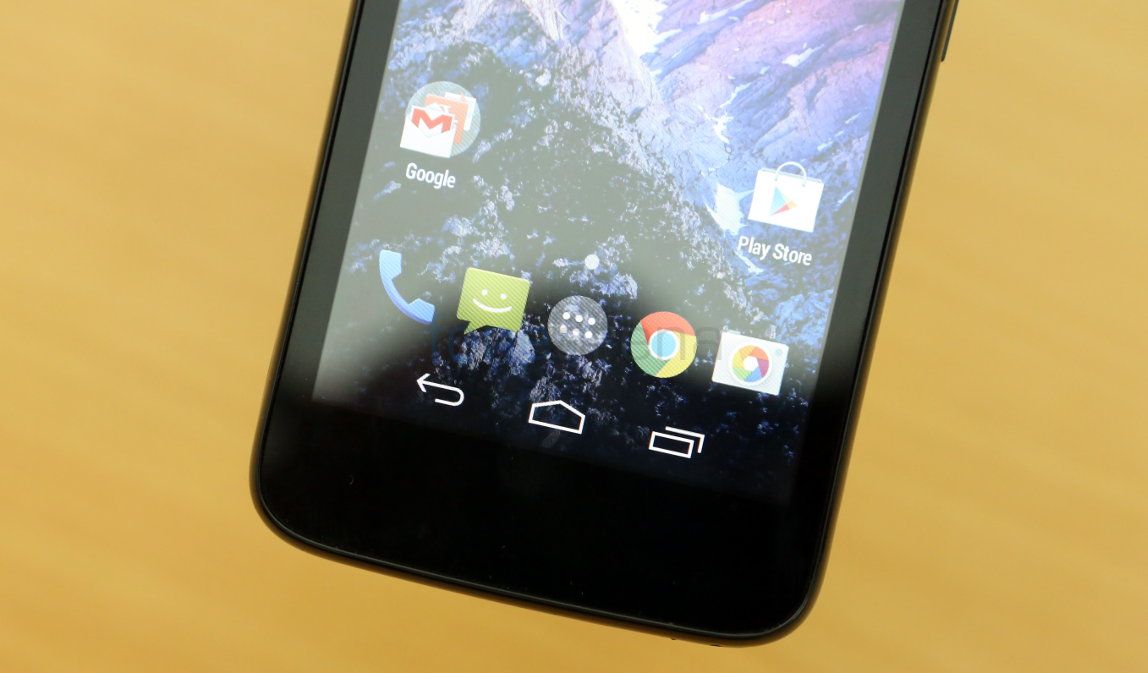 Even though it has on-screen buttons, similar to the Moto G, it is slightly taller and wider than the Moto G that also has a 4.5-inch screen. This is due to the huge bezel around the display. Wish it was more compact. 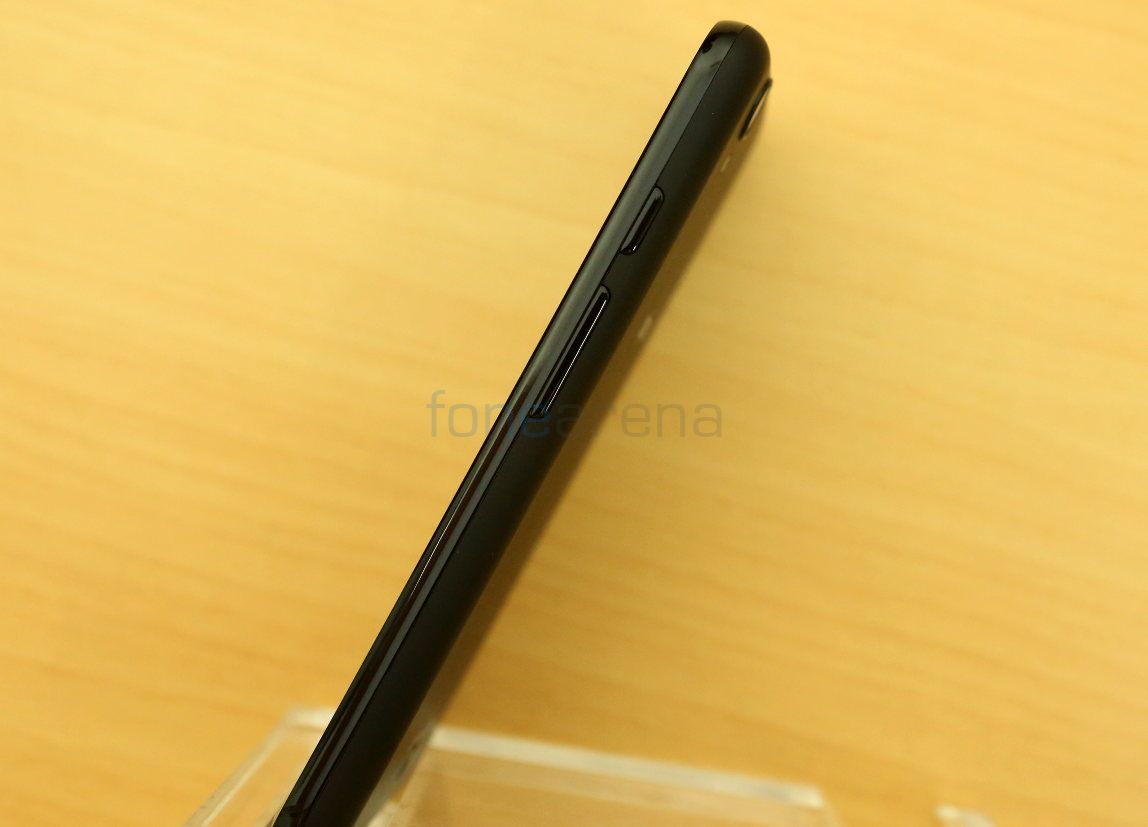 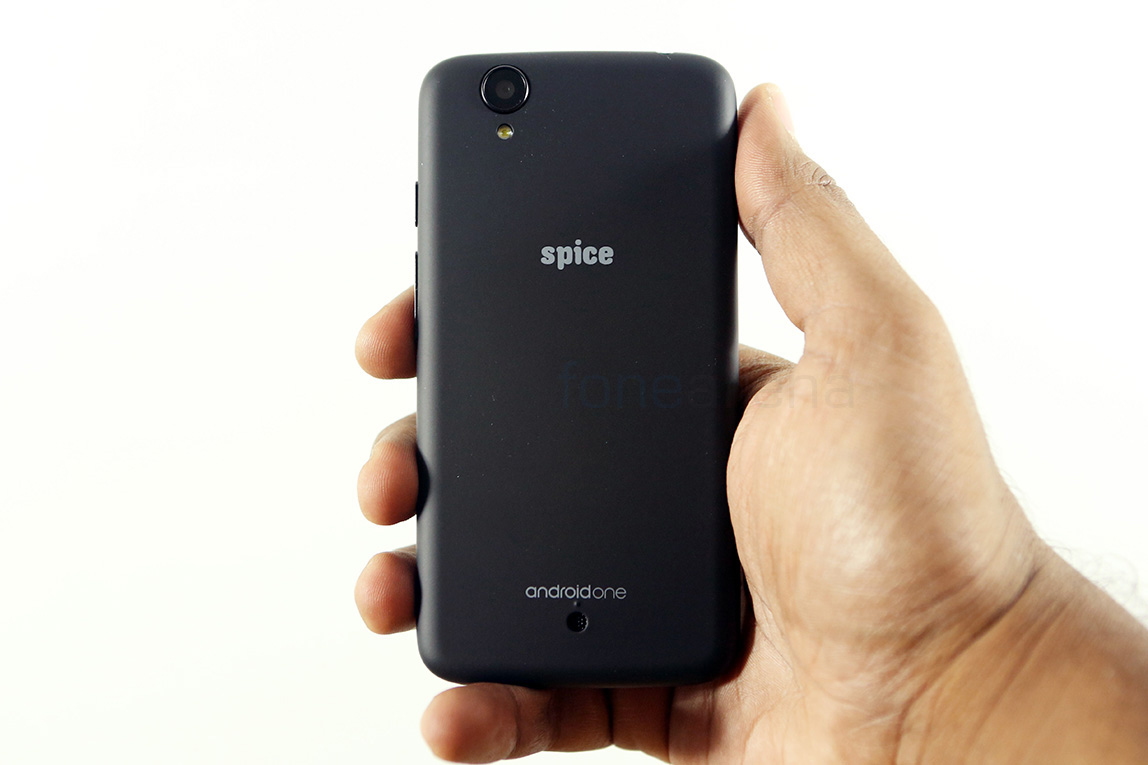 The back cover has smooth matte finish, which feels good in hands and doesn’t slip easily. Even though it has a plastic cover, it feels solid. Since it has a matte finish, it is prone to smudges. It has a 5-megapixel auto focus rear camera with LED flash. The loudspeaker grill is circular, similar to the earpiece grill. 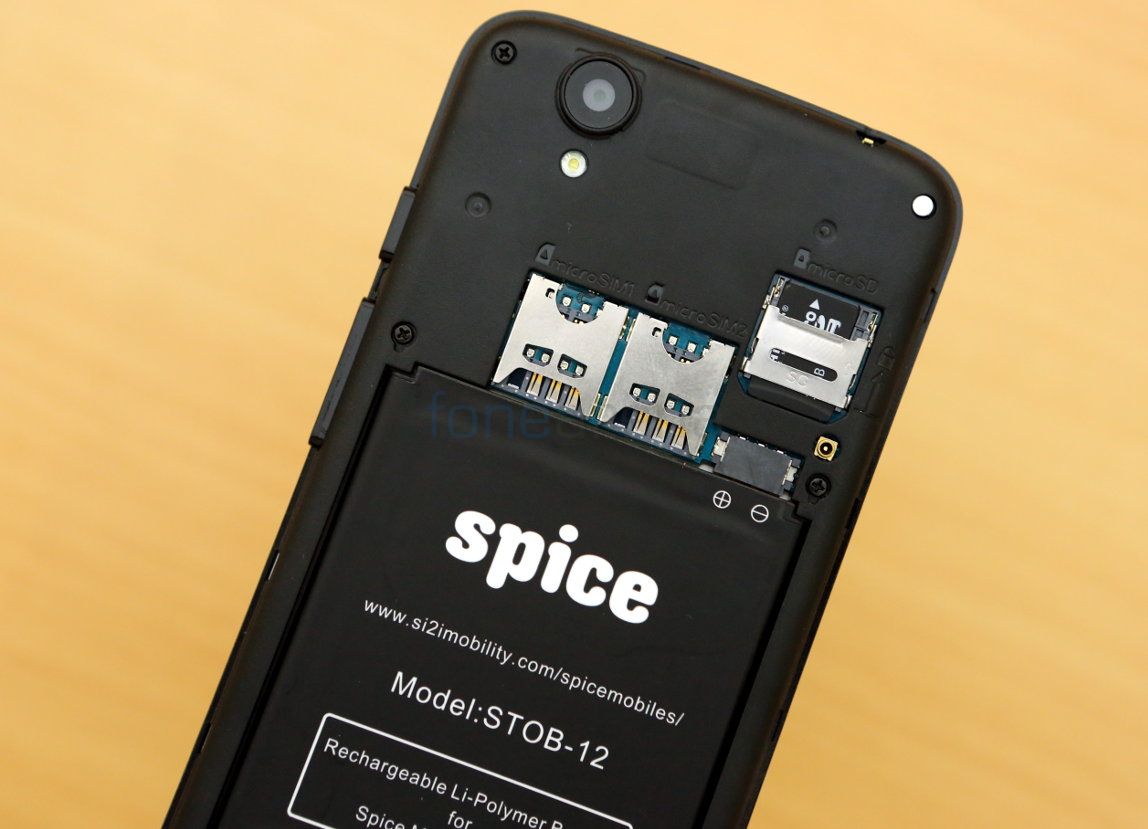 It has two micro SIM slots, microSD card slot and 1700mAh removable battery hidden under the back cover. 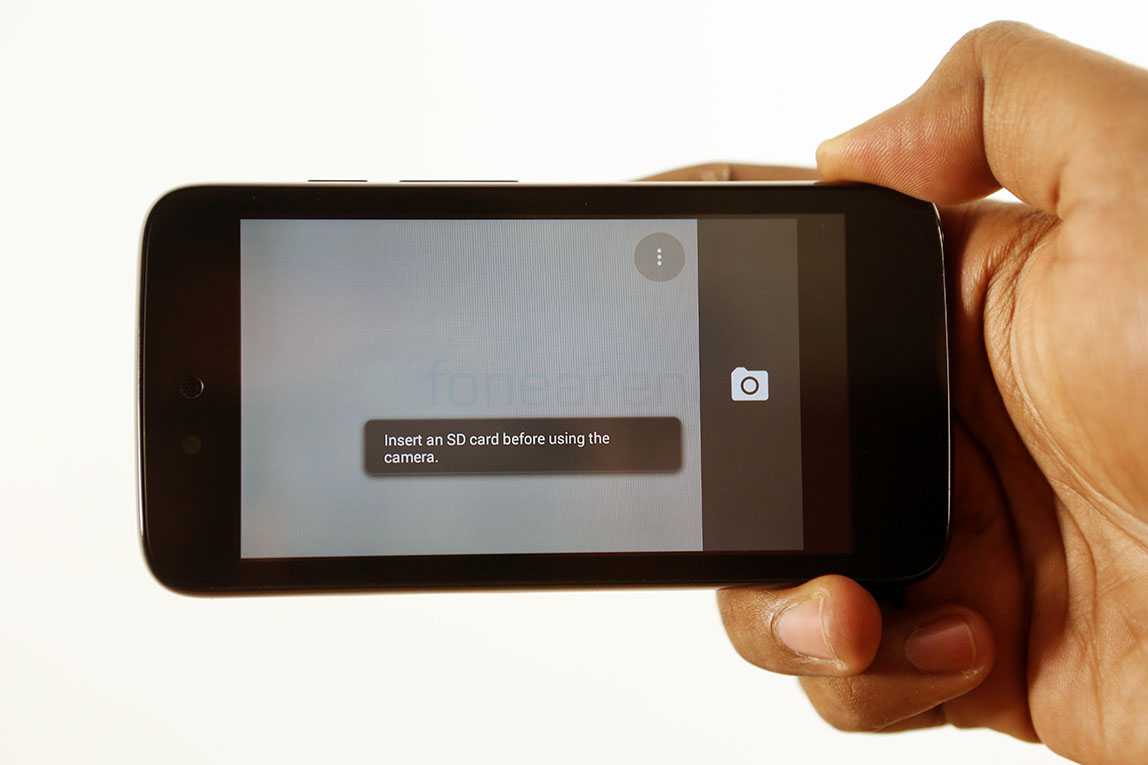 Coming to the camera, it can be operated only when you insert a microSD card. The 5-megapixel camera is decent, but it doesn’t offer much details. Daylight shots and macro shots are good, but some shots seem dull if there is not enough light, such as cloudy conditions. Low-light shots are full of noise, but the LED flash makes the shots better in such conditions. There are minor differences in exposure in the HDR mode.

Google Camera is default in the smartphone, unlike the MediaTek camera interface seen on other MediaTek-powered smartphones. Google Camera has Photo Sphere, Lens Blur and Panorama features. Overall it’s just an average camera. Check out some camera samples below (Click the images to view the full resolution image). 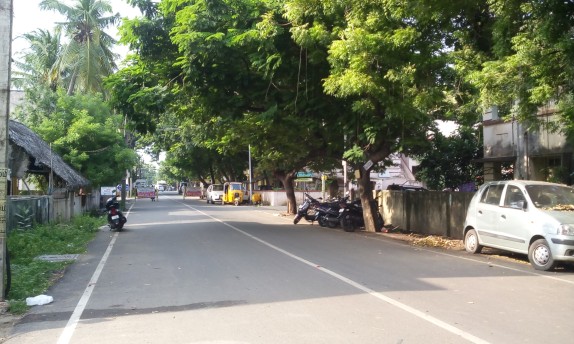 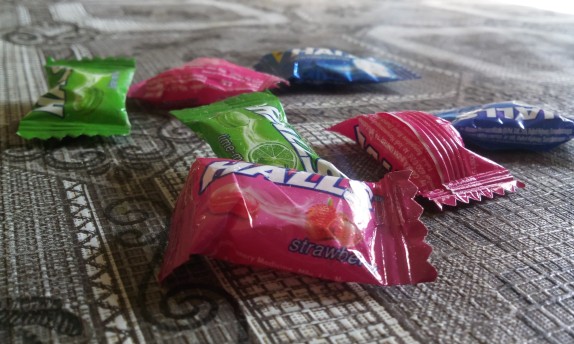 It can record videos at 1080p resolution. The video doesn’t have much details and the audio is not crisp since it lacks a secondary microphone. Check out the video sample. 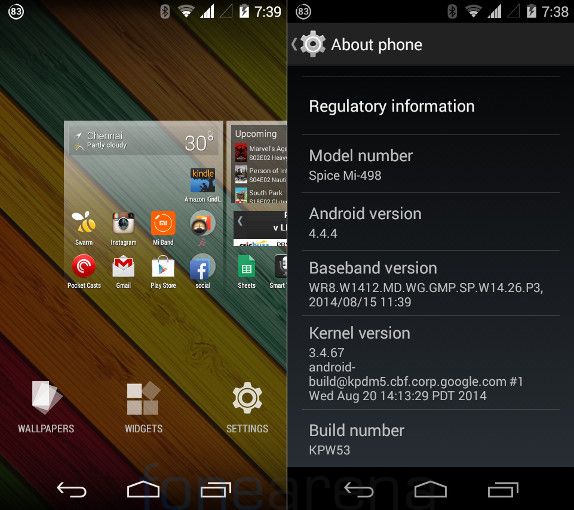 Coming to the software, it runs on stock Android 4.4.4, just like the Nexus devices, and the Google Now launcher is the default launcher, so you can swipe to the left to view Google Now. ‘Ok Google’ voice command works on all the home screens. UI is pretty smooth without any lags.

Since Google pushes out updates directly, you don’t have to worry about the software update for the Android One devices. Google has also promised to update these devices to upcoming Android L version and also promised to provide updates for up to two years. Even though these might not get the updates along with the Nexus devices, these might get it when Google rolls out updates for the Google Play Edition devices. 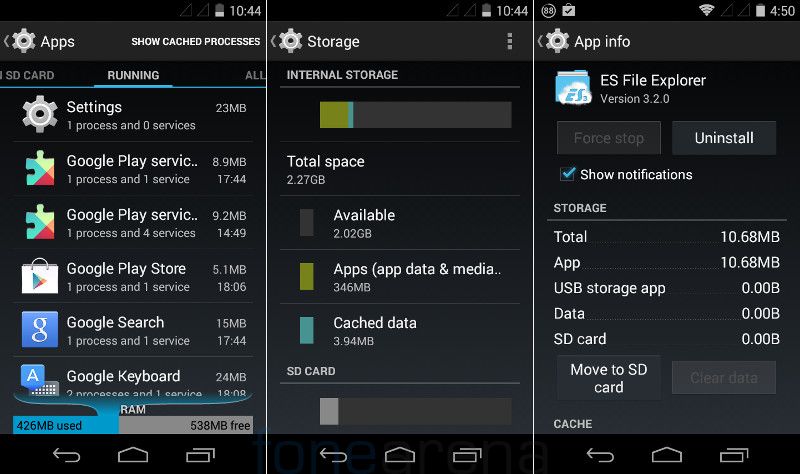 Out of 1GB of RAM, you get 963 MB of usable RAM. About 538 MB of RAM is free when the phone is idle, with just the default apps running in the background. Out of 4GB of internal storage you get just 2.27GB of usable storage. The internal storage cannot be accessed even from the PC.

You can move compatible apps to the SD card once you insert one. You can’t capture a screenshot or access the camera without an SD card. We did not face any issues in installing apps, like the Micromax Unite 2 . Even though it doesn’t have a separate option to set the SD card as the default write disk, all the large games are directly installed to the SD card, so you don’t have to worry about the internal memory getting full, unless you install a lot of small apps that doesn’t have an option to move to the SD card. 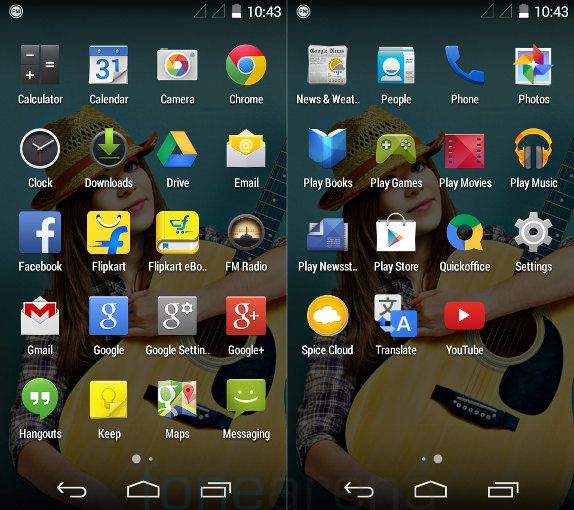 Google already announced at the I/O that the Android One would have Play Auto installs, which is pre-installation of apps on the phone. The Spice smartphone just comes with Flipkart, Flipkart eBooks and the Spice Cloud app, apart from the usual set of Google Apps. The Spice Cloud offers 10GB of cloud storage.  It doesn’t have a gallery app or a file manage that you usually see on MediaTek-powered smartphones, so you have to rely on third-party apps for those. It also has Reverie Smartpad, an Indic keyboard with text input in 20 Indian languages. 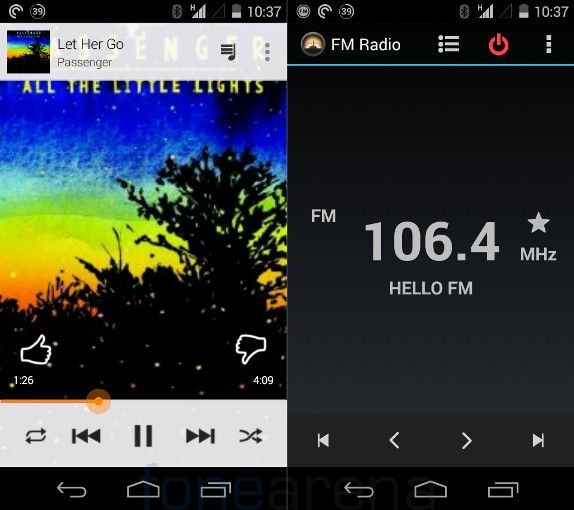 The Play Music is the default music player and it can play a range of audio formats. Audio from the bundled earphones could be better and the loudspeaker output is also average. FM Radio has the standard UI seen on MediaTek handsets and comes with auto search, RDS and recording. The default video player can play full HD 1080p videos smoothly. 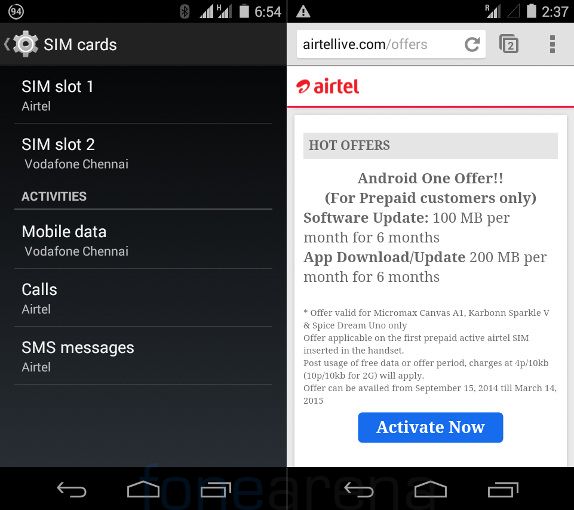 It has SIM manager option that lets you set a default SIM. Both the SIMs support 3G, and you can switch either SIMs for data, calls and SMS. It takes some time to switch the between SIMs for different activities. Connectivity features include, 3G HSPA+, Wi-Fi 802.11 b/g/n, Bluetooth 4.0 with A2DP and GPS. It has support for wireless display, but lacks USB on-the-go (OTG).

All the Android One smartphones come free data for pre-paid Airtel customers. This includes 100 MB of free 3G data per month for 6 months for software updates and 200MB per month for app downloads or updates. This data cannot be used for normal browsing. You can activate this offer by heading to airtellive.com/offers from the Android One phone’s browser using data connection. You will get an SMS once it’s activated along with USSD codes for checking the data balance. 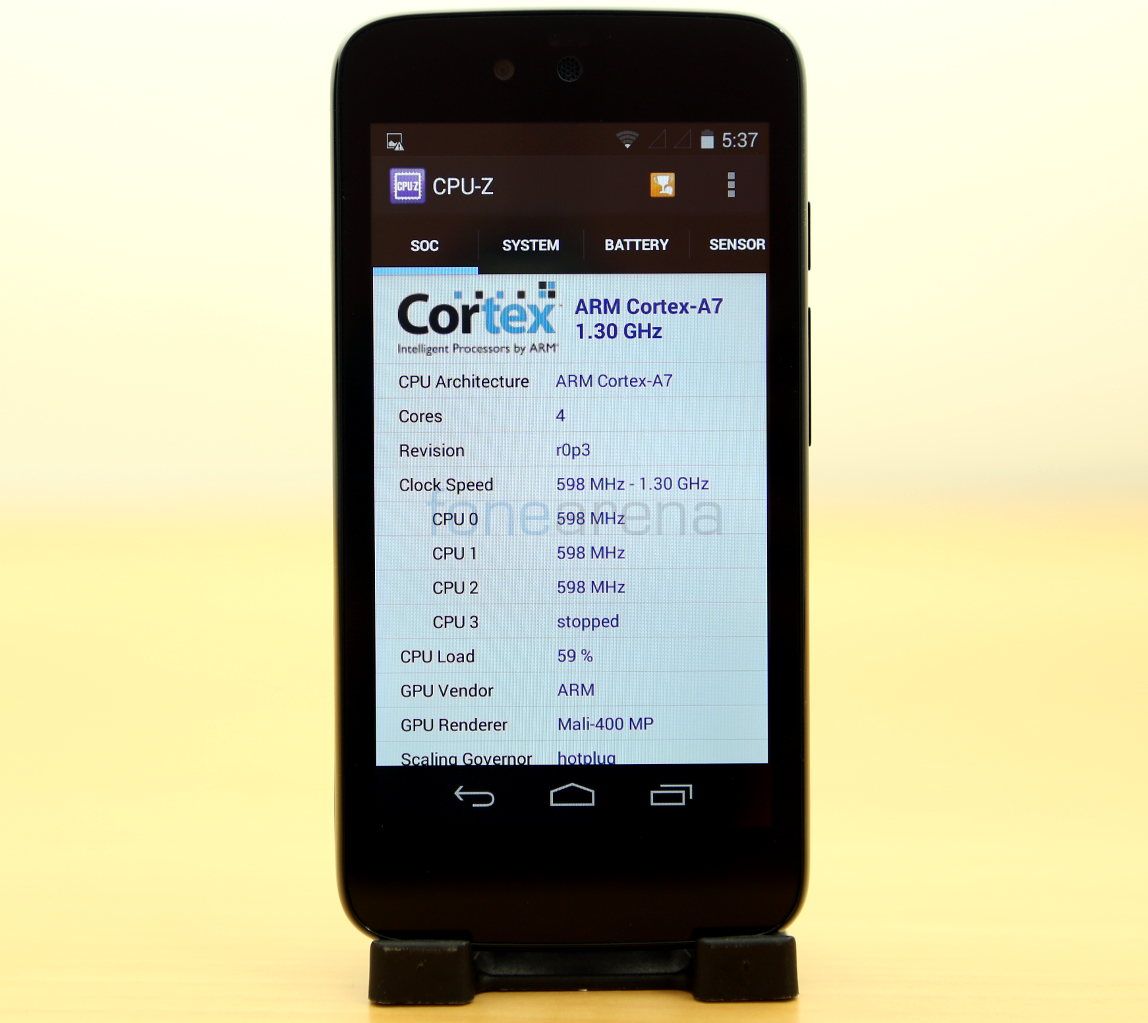 The smartphone is powered by a 1.3 GHz quad-core MediaTek MT6582 processor with Mali 400 GPU. Overall performance is pretty good. Google has optimized the software so that it doesn’t lag a bit when switching between the homscreens or browsing. Thanks to 1GB of RAM, multitasking was smooth too. It gets heated a bit on prolonged 3G usage and intensive gaming, similar to most other smartphones, but it doesn’t get too hot. Check out some synthetic benchmark charts below. 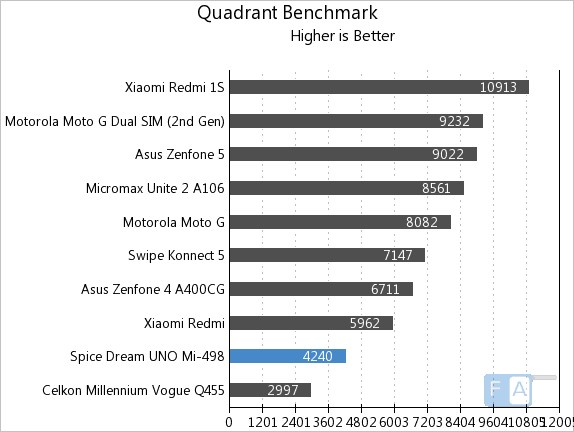 It managed to score 4240 points in the Quadrant Benchmark. 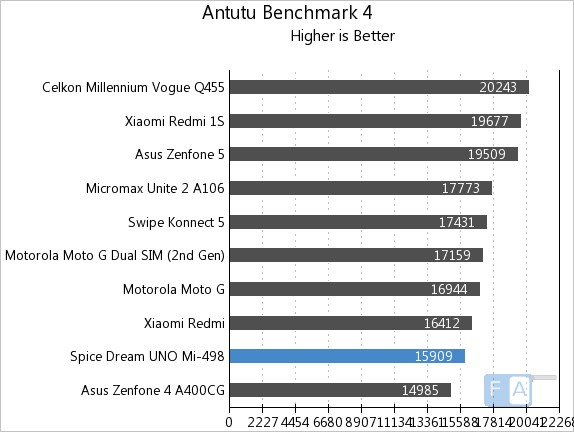 In the AnTuTu Benchmark 4, the Spice Dream UNO managed to score 15909 points. 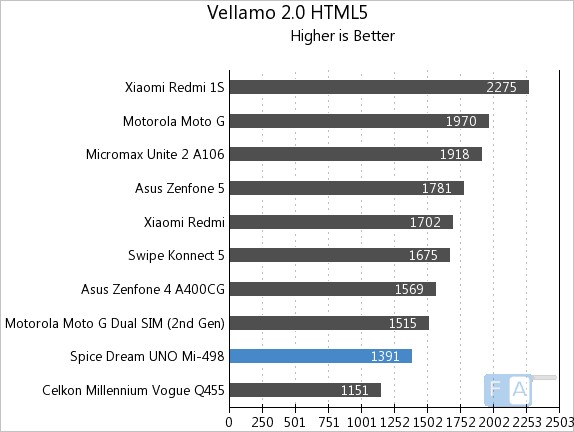 It managed to score 1391 points in the Vellamo 2 HTML5 browser benchmark. 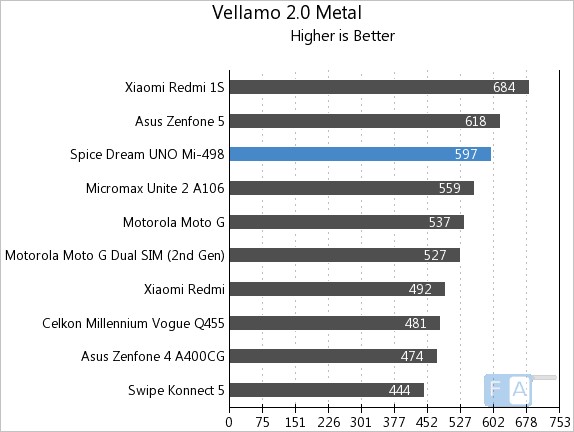 It scored 597 points in the Vellamo 2 Metal CPU subsystem performance test, better than the Micromax Unite 2 that is powered by the same MediaTek chip. Check out the complete set of Spice Dream UNO benchmarks here.

We tested several games on the device, which were decent. Some games did face occasional lags in the gameplay and the graphics was not the best. It doesn’t have support for PS3 controller and huge games take some time to load. Check out the gaming review video below to get an idea about the gaming performance of the smartphone in detail. 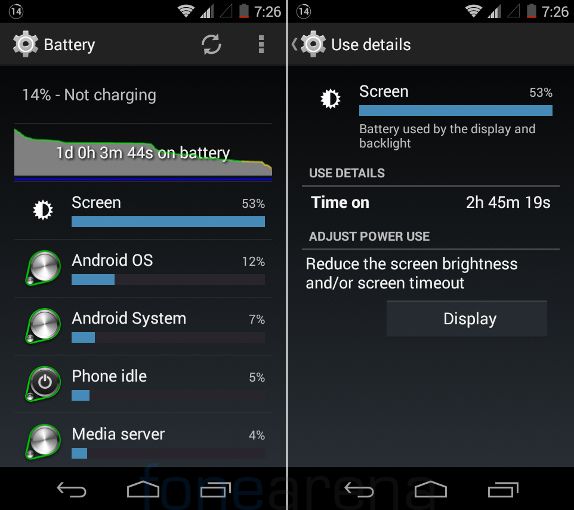 The 1700 mAh battery offers average battery life that lasts for one whole day with minimal use with about 2h 45 minutes of screen time and single SIM card is on use. With heavy usage such as continuous 3G use the whole day and intensive gaming, it lasts for less than a day. 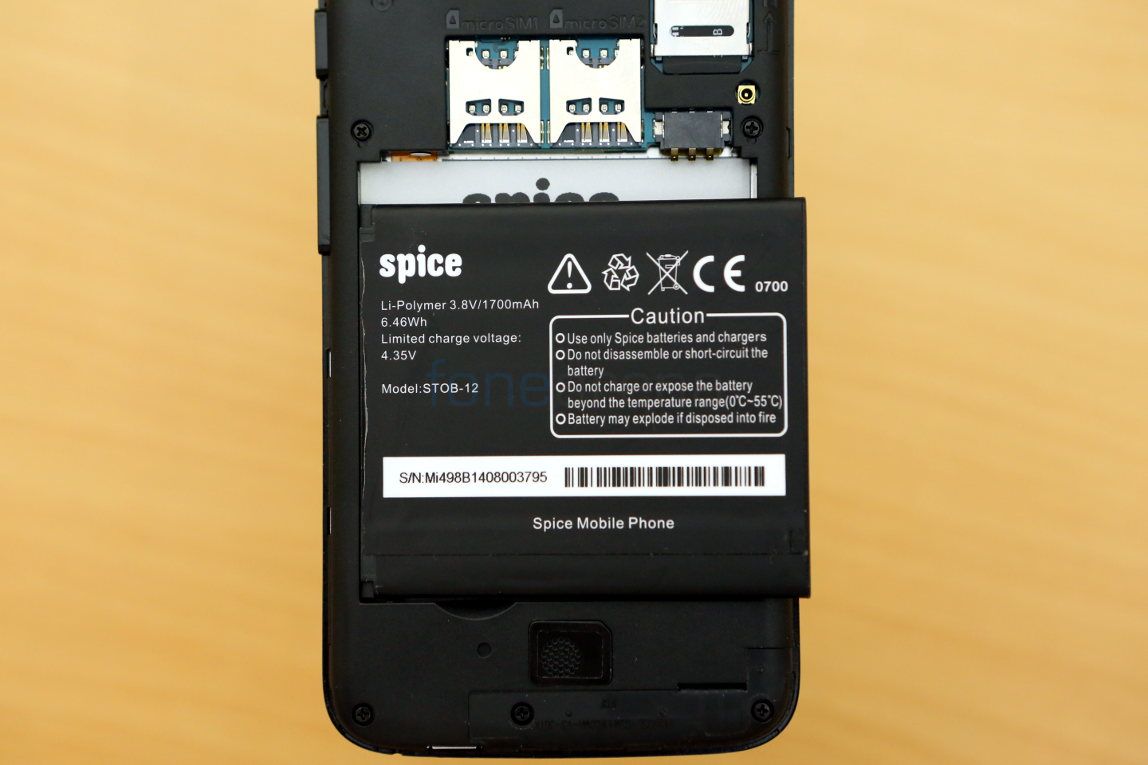 The battery life could have been better, and it’s not the best compared to Moto E. Bright screen is one of the main reasons for quick battery drain, so it is recommended to use the auto brightness.

Overall, the Spice Dream UNO is a decent budget smartphone running stock Android in this price range. One of the main advantages it that it would get updates from Google, doesn’t have any bloat ware and the offers smooth performance. Even though the internal memory is less, the storage management is good. At a price tag of Rs. 6,299, if you can compromise on the display, camera and the battery life for the performance and the pure Android experience, go for it. Google has already announced several new OEM partners and Qualcomm chipset support, so we can expect new Android One smartphones with better specifications in coming months.