Temple Run has touched a new milestone by clocking over 1 billion downloads across all platforms since its inception in 2011. The popular mobile gaming sensation is a product of Imangi Studios and includes the original series and sequel Temple Run 2. This is only the second game after Rovio’s Angry Birds to cross 1 billion downloads.

It must be noted that these downloads does not include Temple Run Brave edition that was launched with a Disney partnership. The developer studio has also shared some statistics about the user base of the games. In three years, Temple Run users have collectively spent 216,018 years playing more than 32 billion games—in total, running a whopping 50 trillion meters while dodging obstacles and collecting coins. 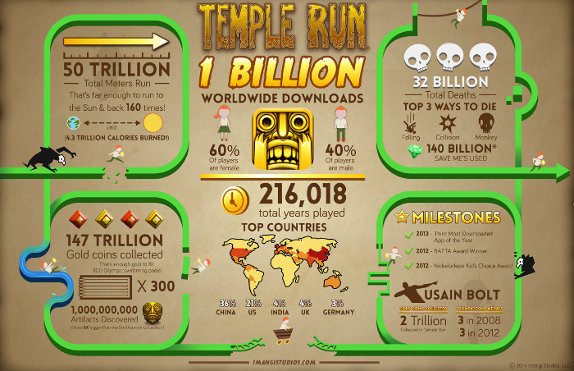 The studio revealed that Temple Run has been played by 60% of women. Giving country wise share, Imangi stated that the game is most popular in China, which accounts for 36 percent of all downloads which is followed by the US at 21 percent and India at 4 percent.