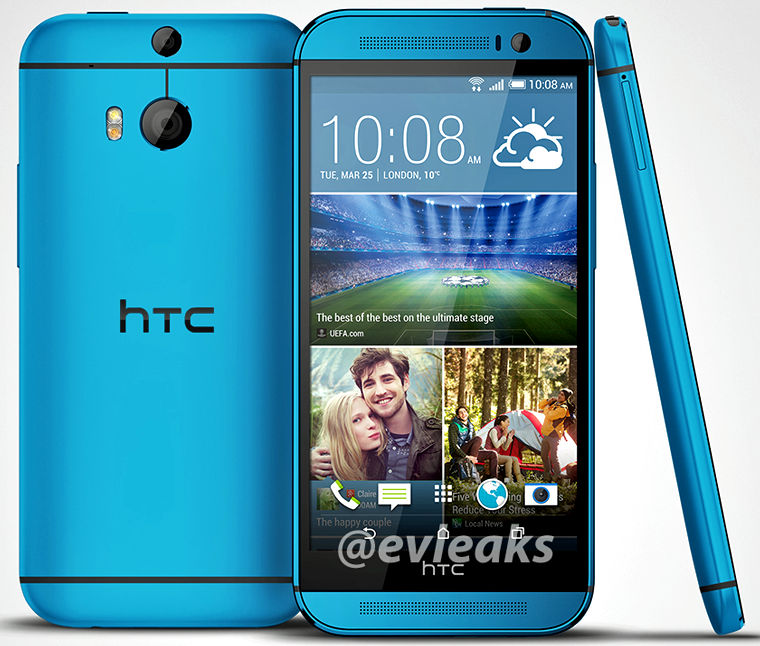 After Red and Pink HTC One M8 @evleaks has leaked the HTC One M8 in Blue. HTC released the One M8 in Gunmetal Gray, Glacial Silver and Amber Gold colors initially and @evleaks revealed that the phone would come in Red, Pink and Blue colors soon. HTC has not officially announced the new color variants yet.

The Blue variant of the phone also has the same black lines running on the sides and the back. The HTC One Mini 2, successor of the One Mini leaked in Gray, Silver and Gold colors recently. HTC released these first-generation HTC One series smartphones only in Glacial Silver and Stealth Black colors initially and later unveiled different color variants. Hope we can see other colors variants of both these smartphones after the One Mini 2 launch.

Other than the new accents, the HTC One M8 is expected to come with similar specifications, including the new HTC Sense 6 UI, Duo Camera, BoomSound speakers and all metal body. Since the press images of all the rumored color variants have been outed, we just have to wait for the official announcement.