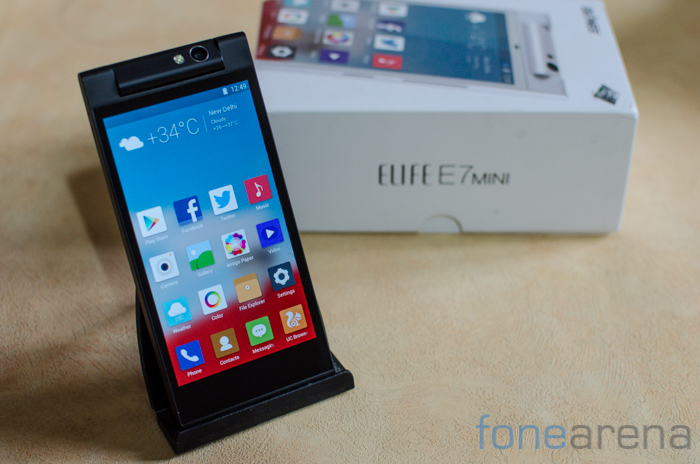 Since its entry into the Indian market, Gionee has faced an uphill struggle against established competition and market preconceptions. Through effective marketing campaigns and quality products, the brand is seeing itself in an ever improving position. With the Gionee Elife E7 Mini, it tries to bring some of the learnings from the flagship E7 to a more affordable price point while also adding yet another twist to the smartphone.

At first glance, the Gionee Elife E7 Mini looks like a surprisingly handsome device. Available in a range of pastel shades, we got our hands on the black unit which has exemplary build quality. 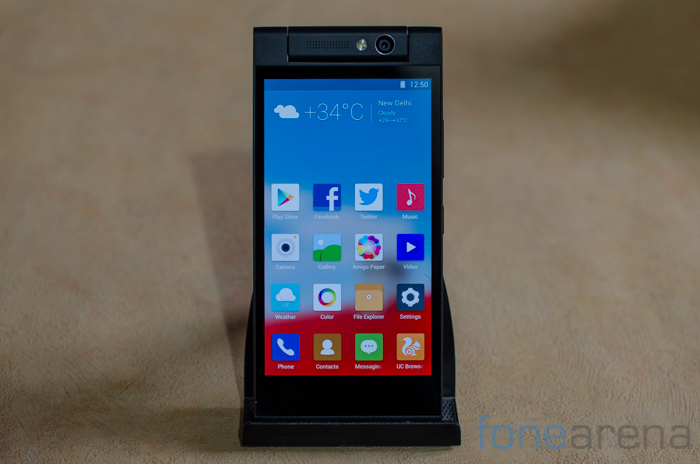 The front of the phone comprises mostly of the tack sharp 4.7 inch screen which is surrounded by fairly slim bezels on the left and right. Up above, the phone houses its USP ie the rotating camera assembly. To maintain symmetry, the bezel below the display is equally large and includes capacitive buttons. 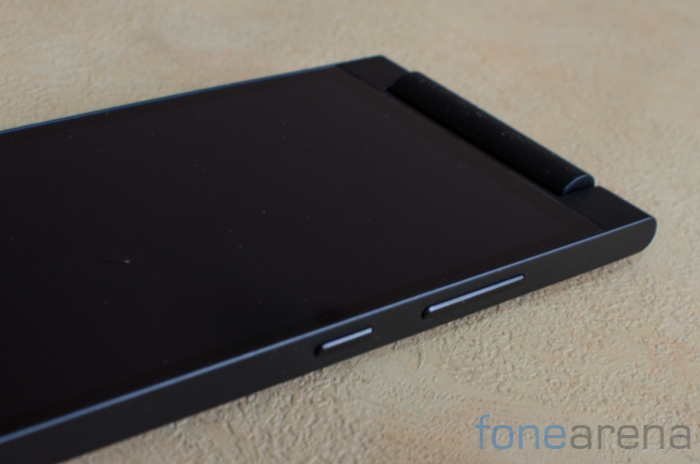 As we mentioned earlier, the design of the phone espouses a design philosophy and attention to detail that isn’t often seen at this price point. Hardware lines run sharp along the side of the phone while the top and button edges curve gently over. On the right side of the phone are the volume rocker and power keys. There is no camera trigger on this device. The left side includes the SIM slot while the 3.5mm audio jack and microUSB port are at the bottom. 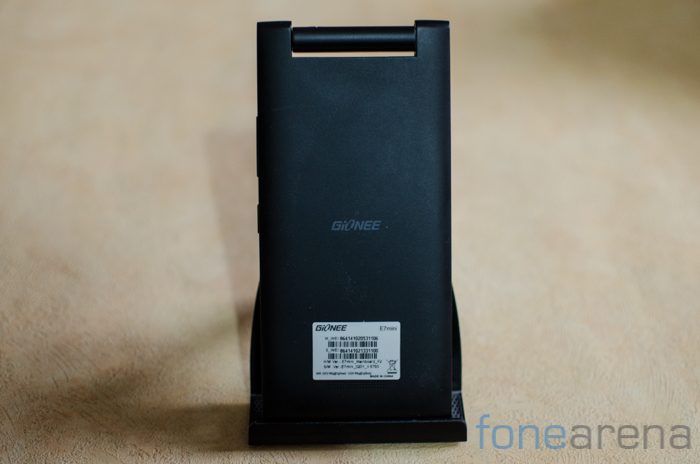 Flipping over the device, we really like how the back gently curves to fit the curvature of your palm. The use of matte black plastics also means that the phone has an understated elegance to it that is further exemplified by the use of minimal branding. 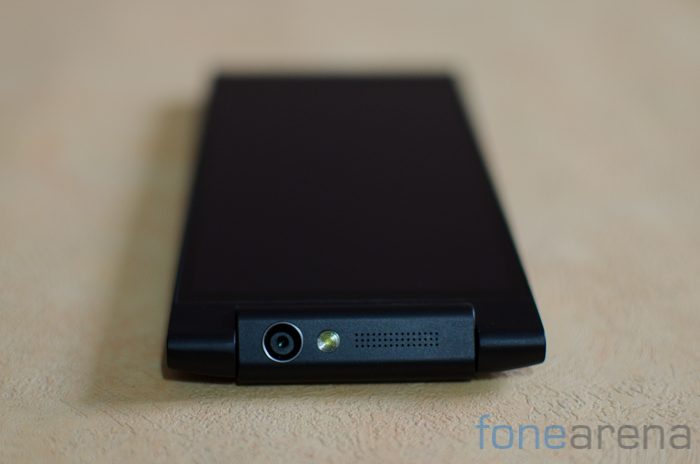 While we’ll talk more about the camera itself in sections below, it is worth taking a closer looking at the camera assembly itself. The Elife E7 Mini is part of the rare breed of devices that sport a rotating camera module. Why? The reason is simple. A rotating module requires more parts which adds to the cost and requires a lot more testing as a moving part is more susceptible to failure. Gionee claims to have tested the module extensively for several thousand rotations and we’d be inclined to believe their claim from what we’ve experienced. The camera module feels rock solid and has perfectly balanced movement to allow you to position it at whatever angle you might want.

Software
The Elife E7 Mini runs the same customized OS build that we’ve seen across Gionee products. Called Amigo OS, it is based on Android 4.2.2. 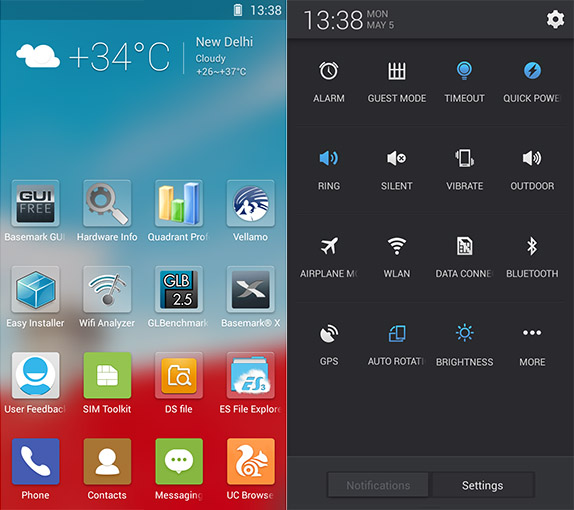 Amigo OS 2.0 takes a fundamentally different approach towards user interaction compared to the standard Android model. The distinct lack of a traditional homescreen and the ability to create widgets is something you spot right off the bat. Gionee has adopted an iOS like user model where all apps are placed on the homescreen itself. A persistent weather widget stays at the top across homesreens. 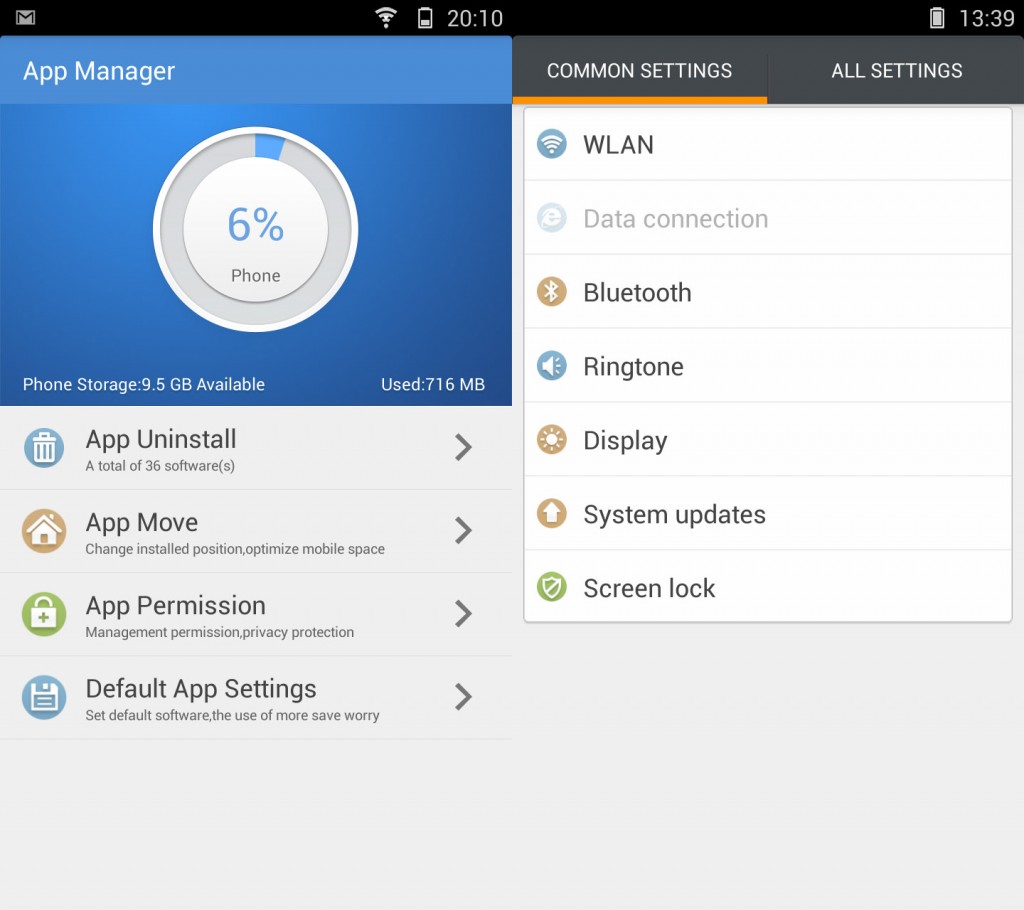 While Amigo OS doesn’t add much in terms of features, we think it does simplify operations to an extent which might appeal to first time users. This extends through out the interface, across applications and down to the settings interface. A number of preinstalled applications prove to be handy including the above average application manager which let’s users move uninstall, move applications. In addition it also provides a very simple way to access per app access settings. 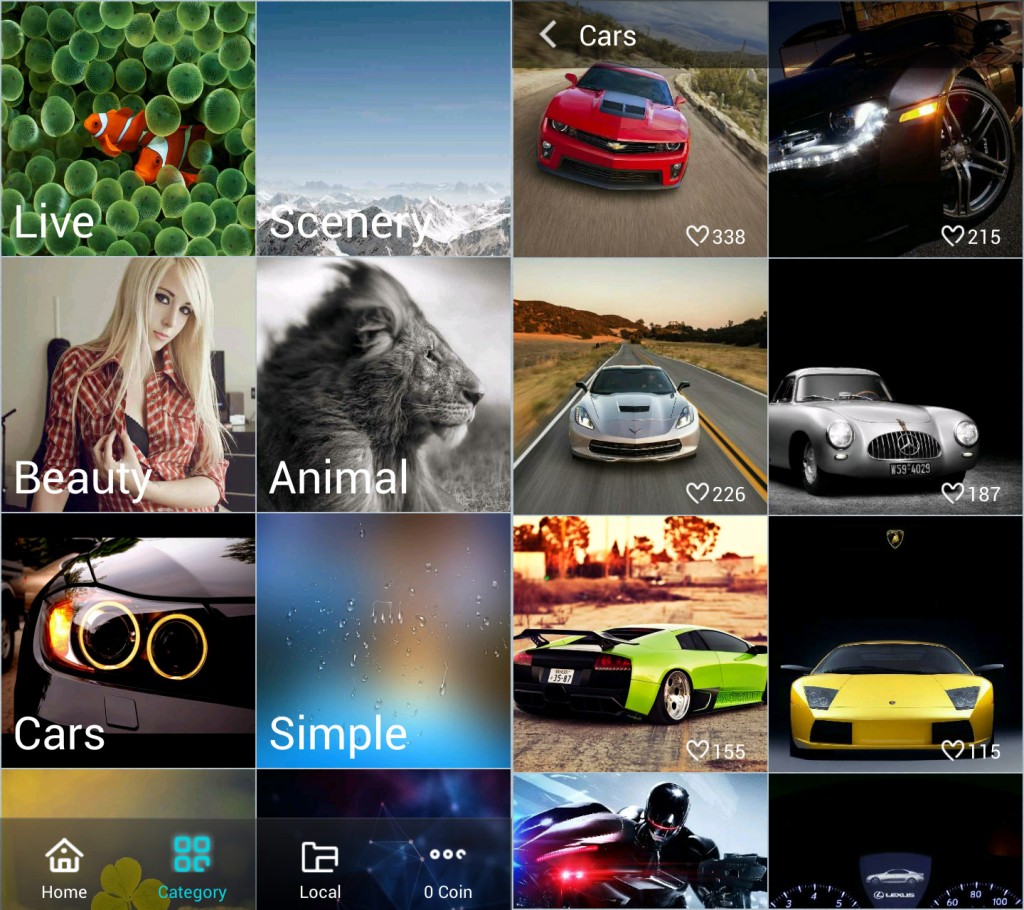 The Amigo Paper application gives users access to a precurated life of wallpapers suited to the device while the color application allows you to change the theme of the device. 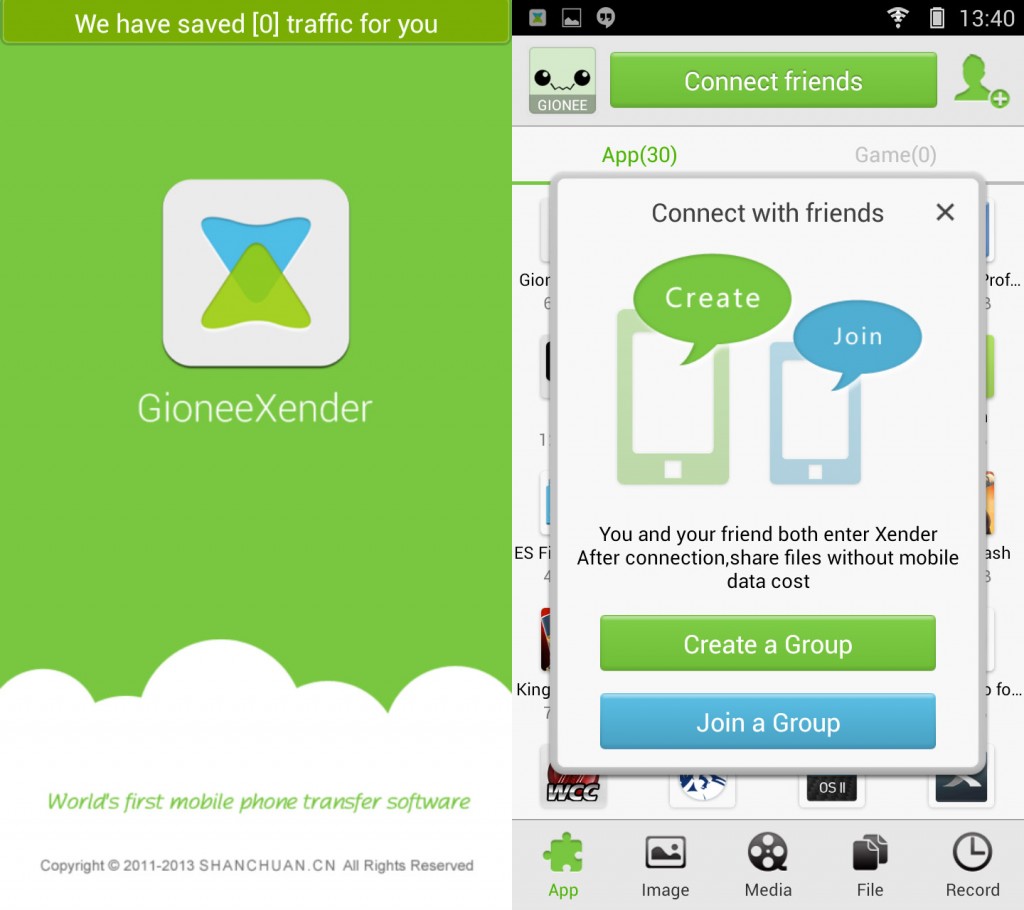 We also found the GioneeXtender application to be a very interesting way to show off the built in WiFi Direct capabilities in a consumer friendly way. It lets you create a local group and share files, apps and media wirelessly at a much faster speed than bluetooth and also without requiring the use of mobile data. 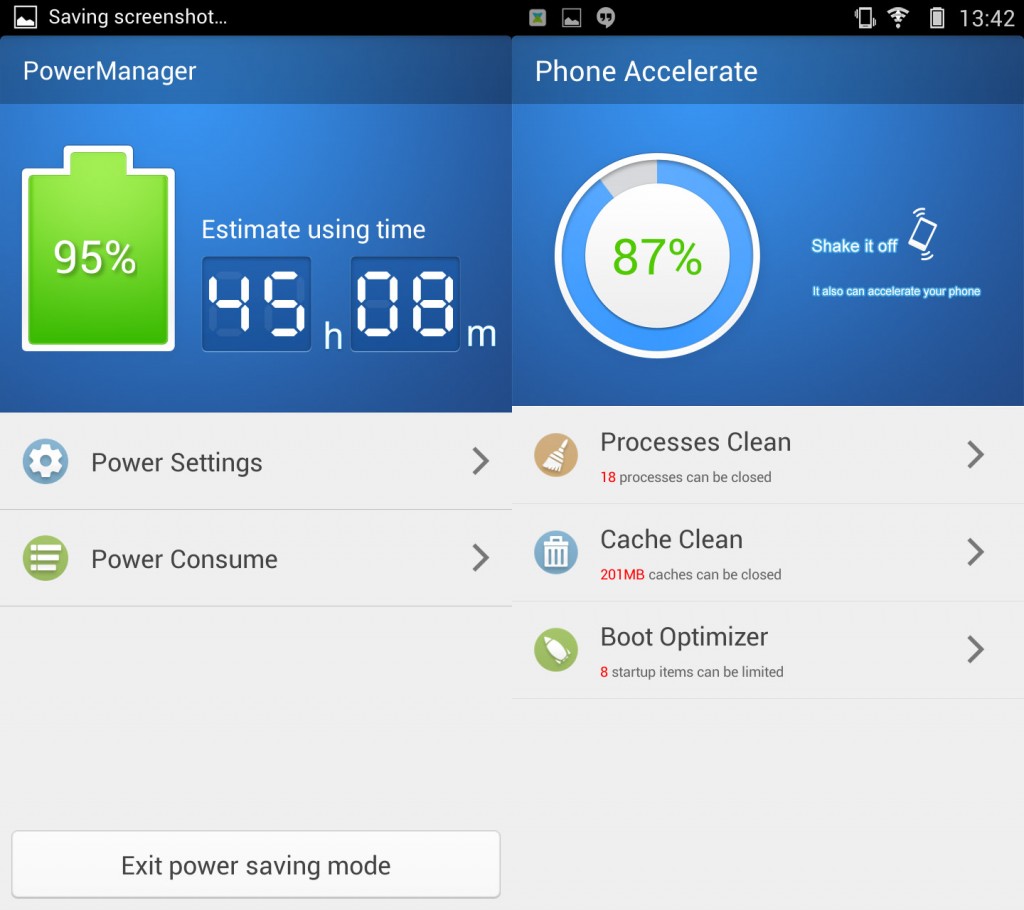 While we don’t usually approve of custom interface layers on devices, we think that Gionee has done a well enough job to get a free pass here. The interface brings some genuinely useful features and makes them easy enough for the average person to use. That’s not to say that it is perfect though. We’d have liked the ability to create widgets. Additionally, the Amigo interface could do with a bit more optimization for the hardware. Jitters and slow downs were more common than we’d have liked.

Performance
The Gionee Elife E7 is powered by a 1.7 Ghz Octa Core MediaTek MT6592 processor. We’ve already detailed the working of this processor previously and find the combination of 8 Cortex A7 cores working simultaneously via heterogenous multi processing to be fairly potent. While this might not be inherently as powerful as A15,A7 clusters, with proper optimization as seen on several Gameloft games, we think the MT6592 processor should deliver great balance between power consumption and performance. The chipset also adds support for new video codecs like VP9 and H.265 which is something that might interest the more technical minded audience. 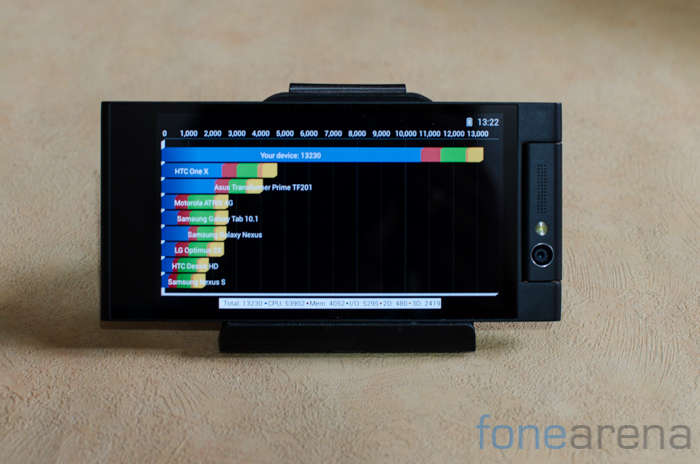 With the 1.7Ghz system on chip, you get 1GB of RAM and a Mali 450MP GPU. The GPU is good enough to drive practically any game you throw at it.

We did feel that Gionee could’ve done better by including 2GB of RAM to aid multi tasking capabilities especially given how the heavy UI layer tends to be a RAM hog.Day to day performance was generally good though there’s a tendency to lag while navigating the interface. This we believe is due to less than stellar optimization of the interface. Using a replacement launcher results in a much improved usage experience. We’ve included a range of benchmarks below that should give you a good idea of comparative performance of the Gionee Elife E7 Mini. 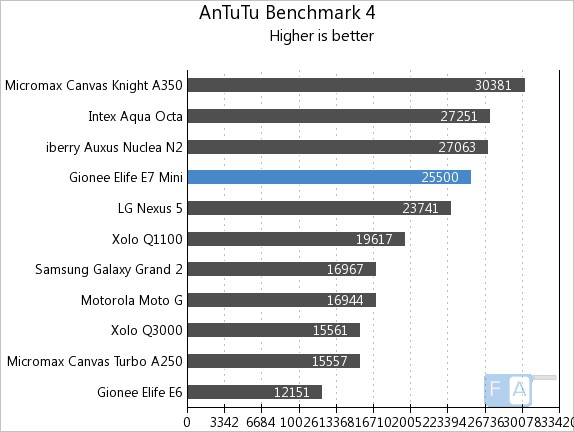 The AnTuTu benchmark works well to give you an overall score of the general performance of a device.The Gionee Elife E7 Mini scores 25,500 points which is well enough to place amongst the top devices in its category. 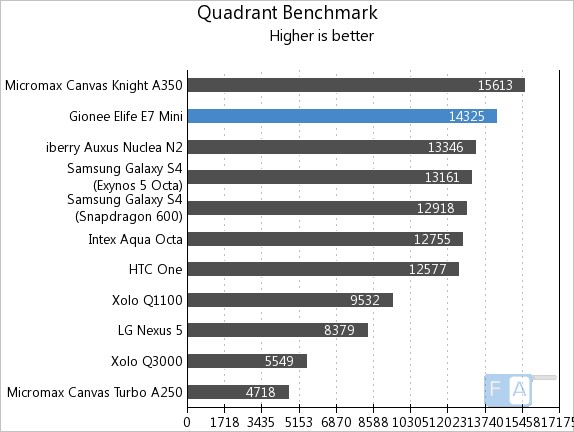 Similar to AnTuTu, the Quadrant benchmark gives a score for general performance, RAM bandwidth and basic GPU performance. The phone outperforms most of the competition and manages 14325 points. 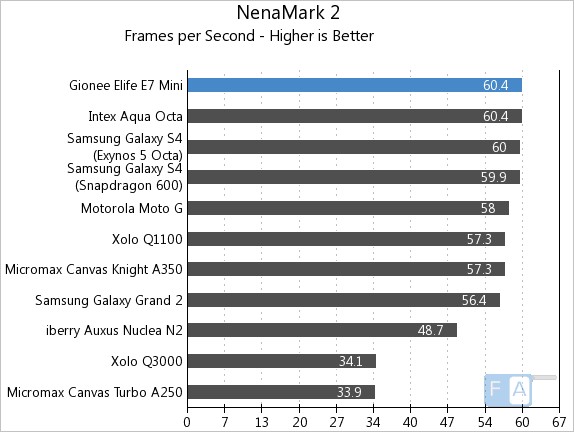 In the GPU centric NenaMark 2 benchmark, the phone scores 60.4 points. You can check out the complete benchmarks in our Gionee Elife E7 Mini benchmarks post.

Display
The Gionee Elife E7 Mini sports a 4.7 inch 720p IGZO panel. The pixel density is about 312ppi which is fairly respectable given the screen size. We were very impressed by the quality of the panel used. Viewing angles are excellent and so are the contrast levels. Compared to amorphous silicon panels, IGZO panels also draw up to 2/3rds less power so it means that your phone should last just a bit longer. This is because an IGZO panel doesn’t need to refresh the transistors while displaying a still image. 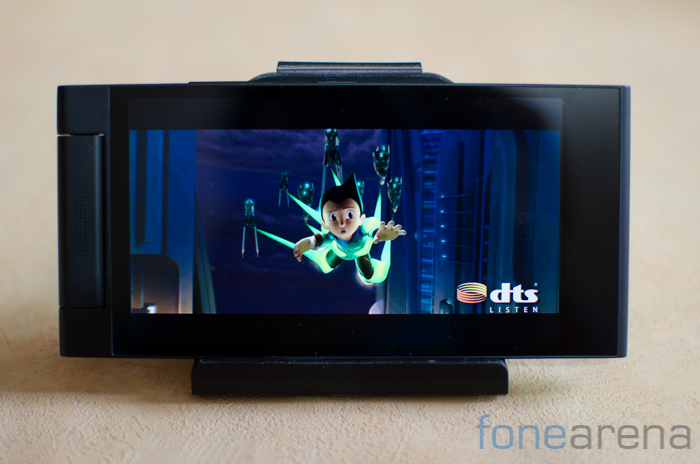 All in all the Gionee Elife E7 Mini packs an absolutely beautiful display that is most conducive for multimedia consumption. A number of software callibration features built into the phone means that you can tune the display’s saturation levels according to your needs.

Camera
While we’ve already talked about the unique hardware proposition that is the camera of the Gionee Elife E7 Mini, there’s still the small matter of image quality. The camera module is a 13MP unit that is paired with a single LED flash. 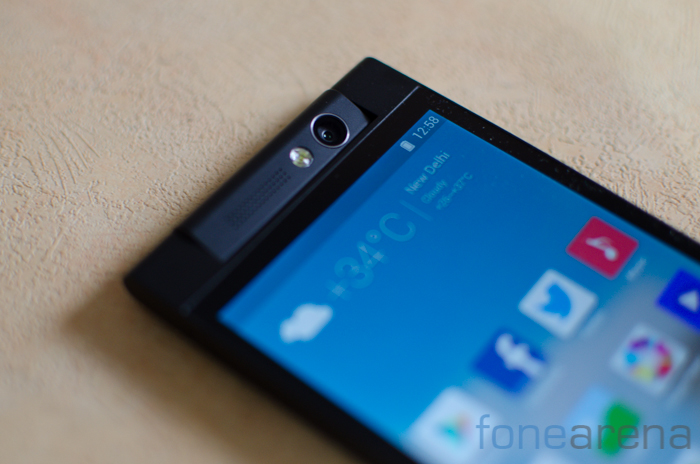 We found that the camera on the Gionee Elife E7 resolved enough detail to stand out amongst its competition. The camera shoots perfectly great shots in decent lighting conditions with almost perfect white balance selection even in less than ideal conditions. Cropping in 100% shows minimal grain as long as lighting is good. Things do go south as the lighting conditions worsen but you should stil be able to get a useable shot with the E7 mini. We also found the camera’s macro focussing capabilities to be impeccable as can be seen in the samples below. 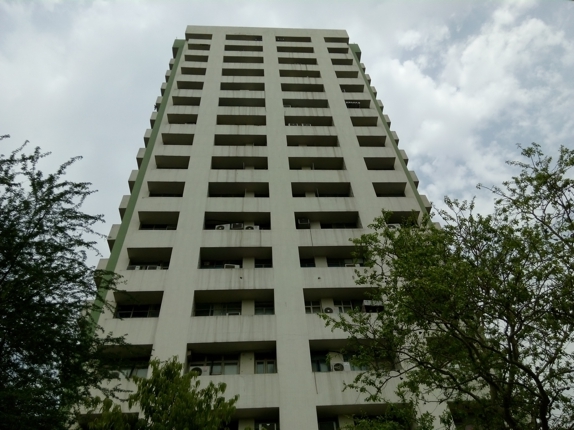 The rotating lens of the phone couldn’t have come at a better time with the ‘selfie’ fad right at its peak. With the 13MP camera peaking at you, you’ll be in the perfect spot to take high resolution self images if that’s what you desire. The software on the Gionee Elife E7 mini is conducive to this with the presence of Touch / Gesture / Smile Shot modes.

Connectivity & Battery Life
With a fixed 2,200 mAh battery unit we found real life longevity to be a mixed bag. Extensive usage of the camera and gaming on the device predictably drains the battery but also gently heats up the phone. With standard usage patterns including a bit of phone calls, a few hours of music listening and the occasional photograph, we just about managed a day of usage out of the Gionee Elife E7 mini. That said, you’ll definitely have to charge this phone every night. 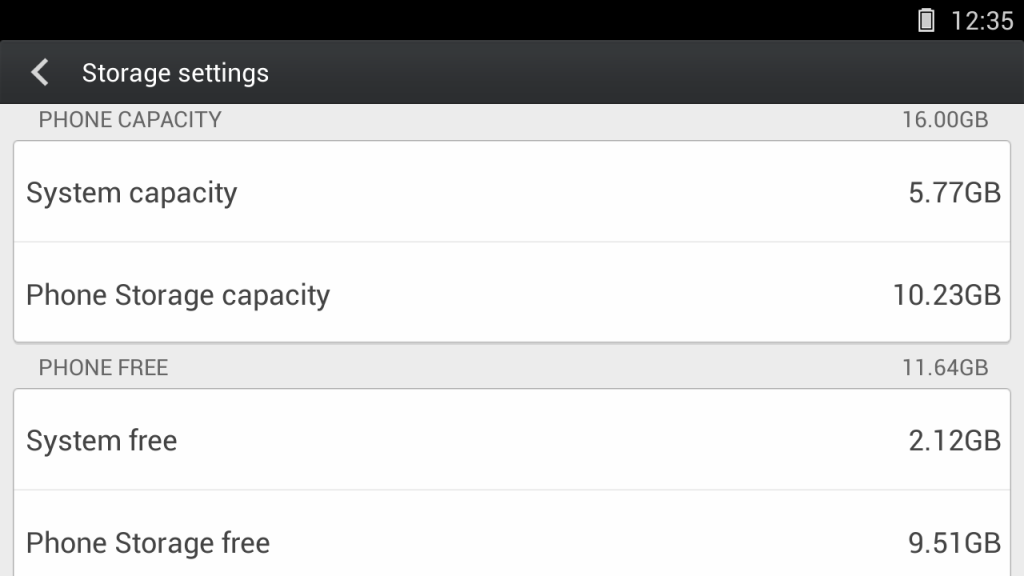 Connectivity options on the phone includes the standard 3G, WiFi 802.11 b/g/n, Bluetooth 4.0 and GPS. There’s 16GB of storage built in but unfortunately no memory card slot is present on the device. Users get a little over 10GB of phone storage for storing all their media on the device which is on the lower side for sure.

Conclusion
The Gionee Elife E7 Mini is a very interesting blend of a unique form factor, performance and an enticing price point. Once again, Gionee has managed to pique market interest by delivering a product that punches above its weight. 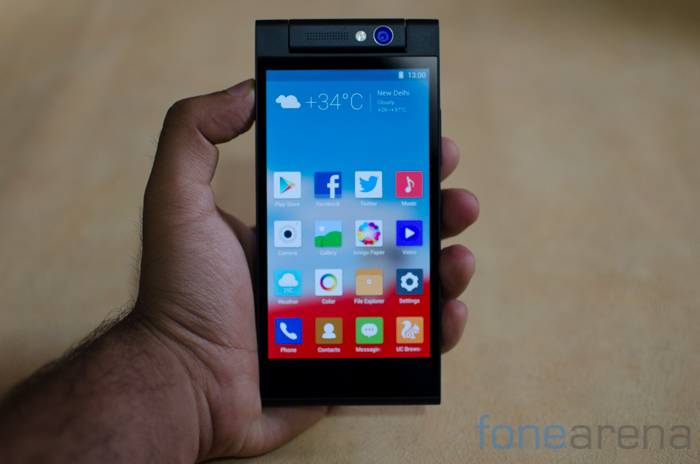 Is it perfect? No, the battery life could be better and the lack of a memory card slot is a major oversight. However the phone delivers in most other critical areas which makes it an excellent proposition especially at the Rs. 18,999 price point that it commands.