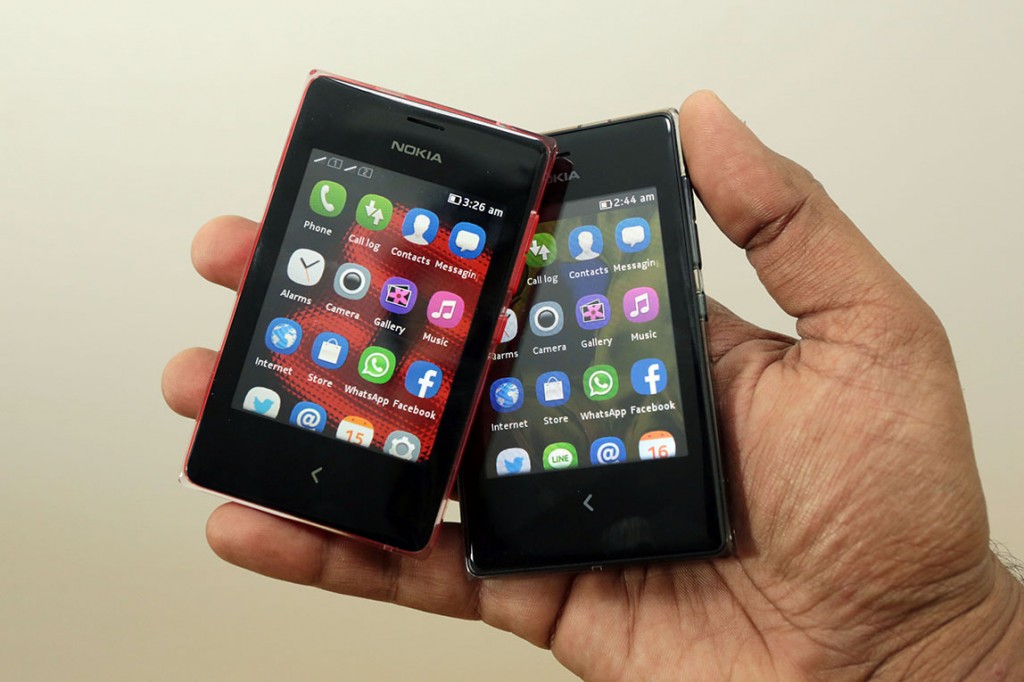 The video above should have given you a fair idea of the differences between the two, but in case you skipped, let us walk you through the differences, in pictures. 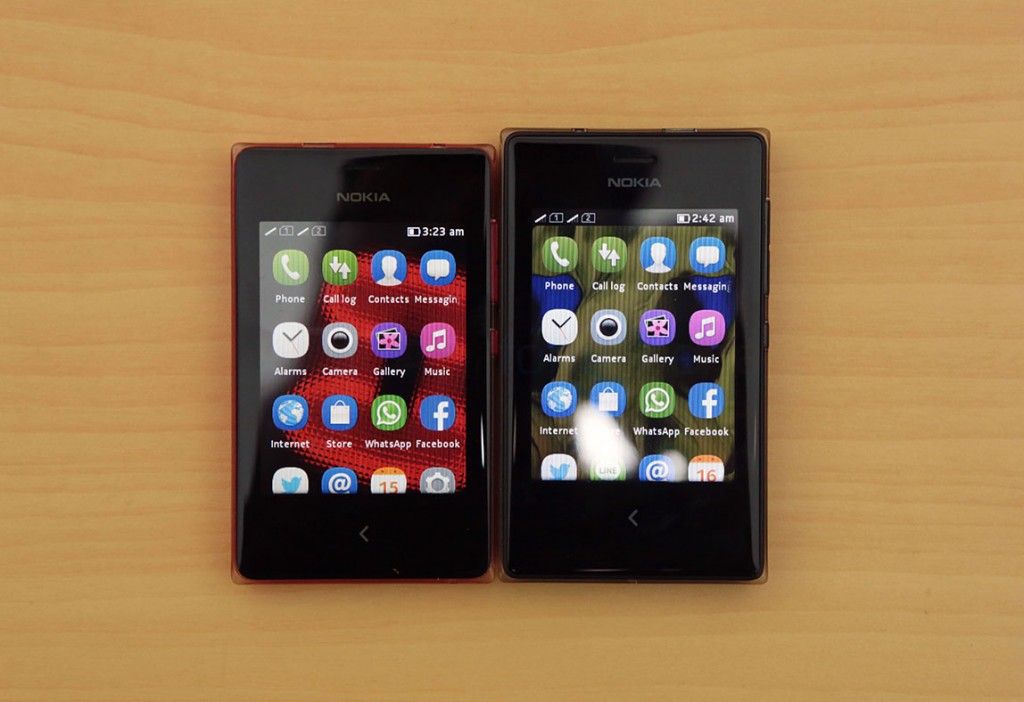 Lets see the obvious hardware differences first. The Asha 503, in black, seems to be longer than the Asha 502. As you can note from the picture above, the 503 not only looks taller but seems to have disproportionate vertical bezels too, with the bottom one bigger and the back capacitive button higher. This would not result in any changes to actual usage but it’s worth noting that the Asha 502 is more handy. It’s a petite device that’s really comfortable in the hands. 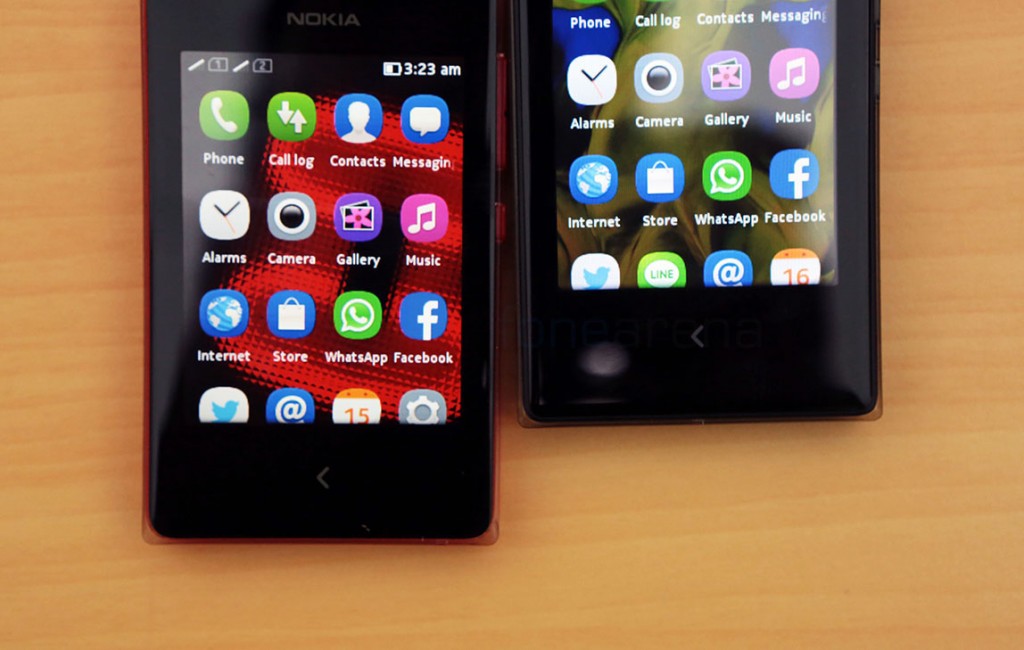 Another obvious difference we could note is that the Asha 502 doesn’t have a frame protecting it’s ever slightly curved screen while the 503 does, if you look closely. 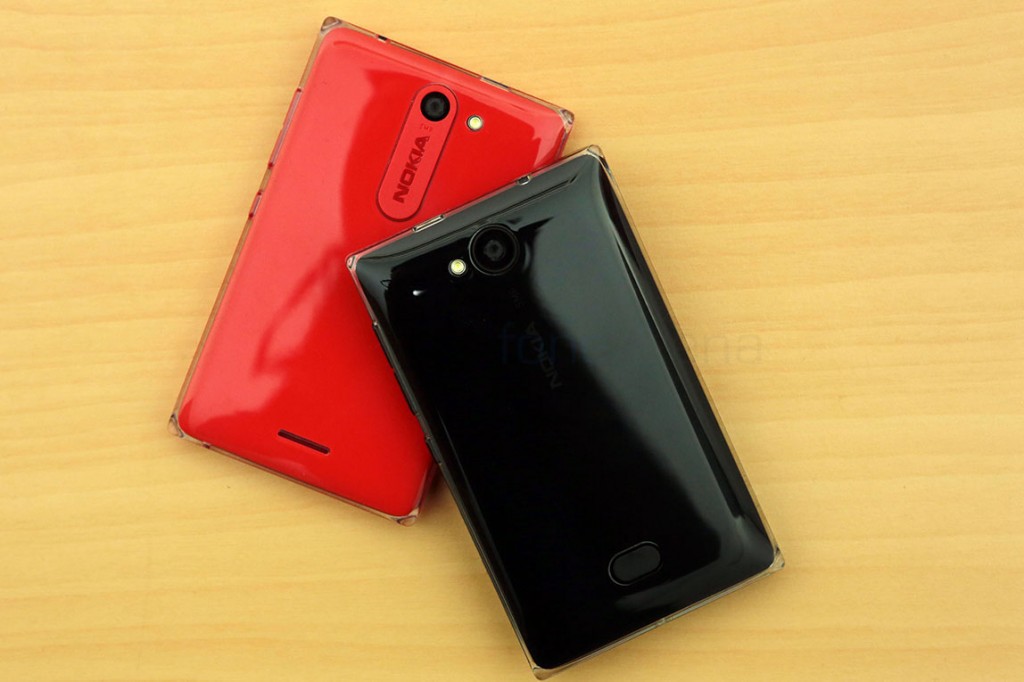 Both have a highly glossy finish on the outside, which doubles up as protection and unique design. The iced frost look is something we want to see in other devices like the Lumias too, but that might not be feasible. You can also note the minor changes in the placement of the battery door wedge, the beauty sport and the camera lens and LED flash positions. 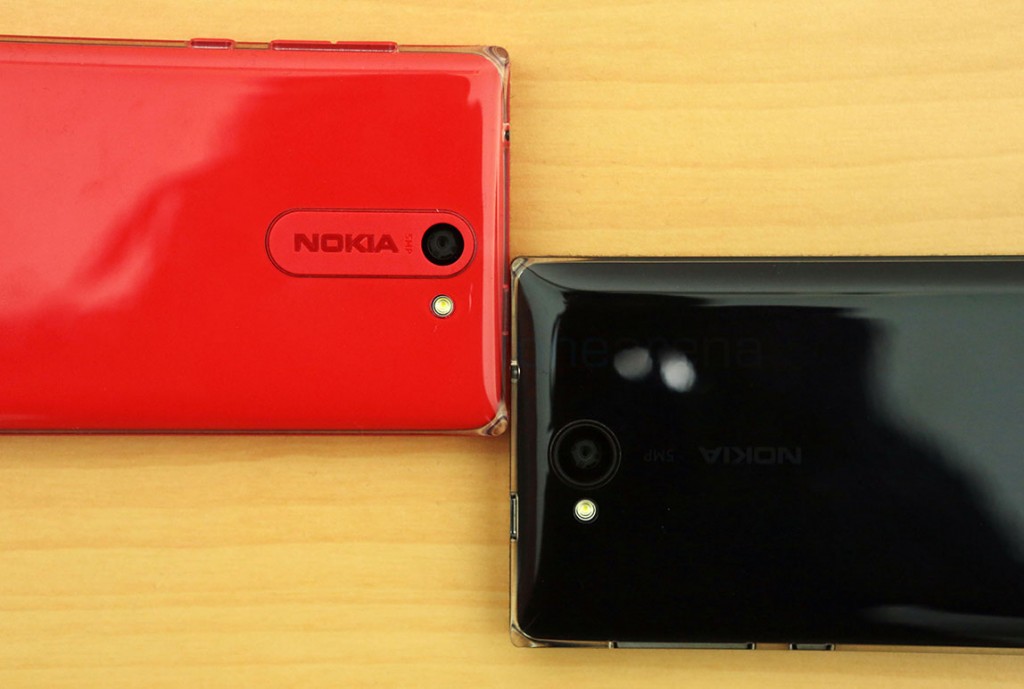 Talking of the camera, both come with the same 5 megapixel unit and perform almost exactly the same, indicating that both possibly have the same sensor and lens combination. It is a fixed focus camera with a single LED flash. 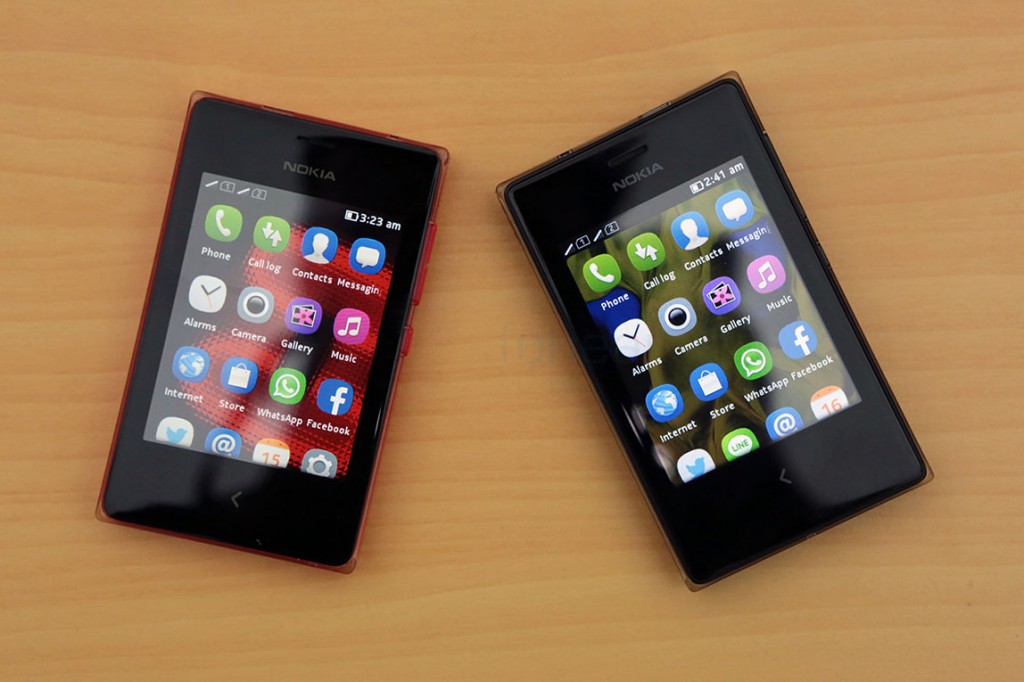 Display wise, the phones are not much different. They both have the same 3 inch QVGA screens but we noted that the 503’s display is a bit cooler, with whites having bluish tones than the 502, which is warmer and more likeable in our opinion. 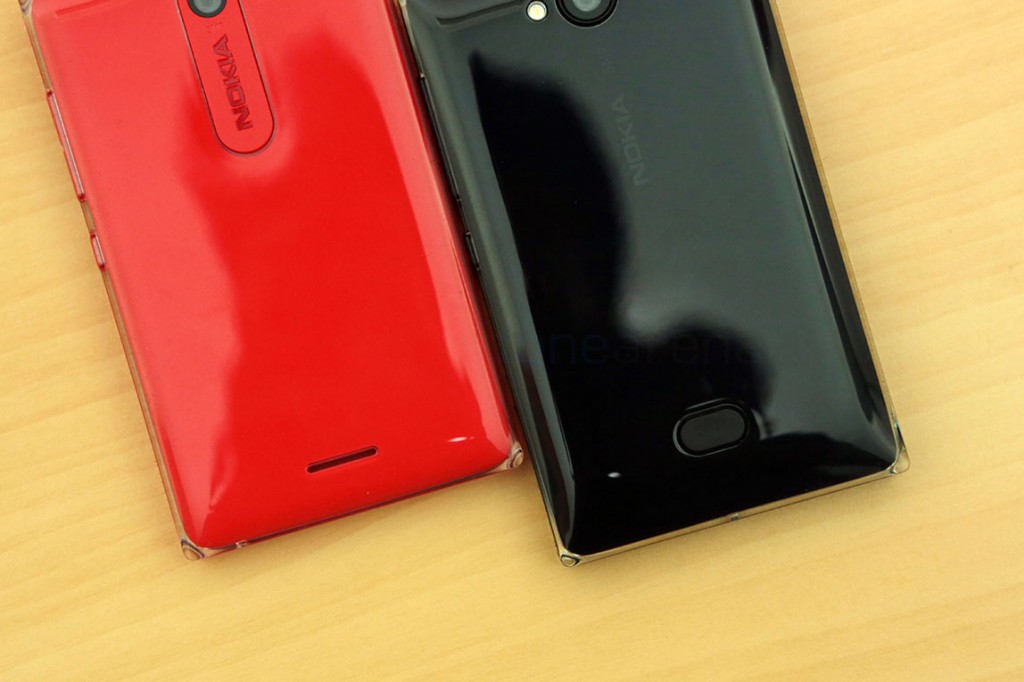 But the main difference between these two phones is under the hood. The Asha 503, being the costlier one, comes with a 3G modem. Yes, the Asha 503 supports 3G on one SIM and 2G on the other, while the 502 is full fledged 2G. Due to this single factor, we are seeing different design decisions in terms of length and more importantly, the battery. The Asha 503 comes with a slightly larger 1200 mAH battery while the 502 comes with a 1010 mAH unit. Practically, this is to compensate the extra battery drain that is expect from using the 3G modem. 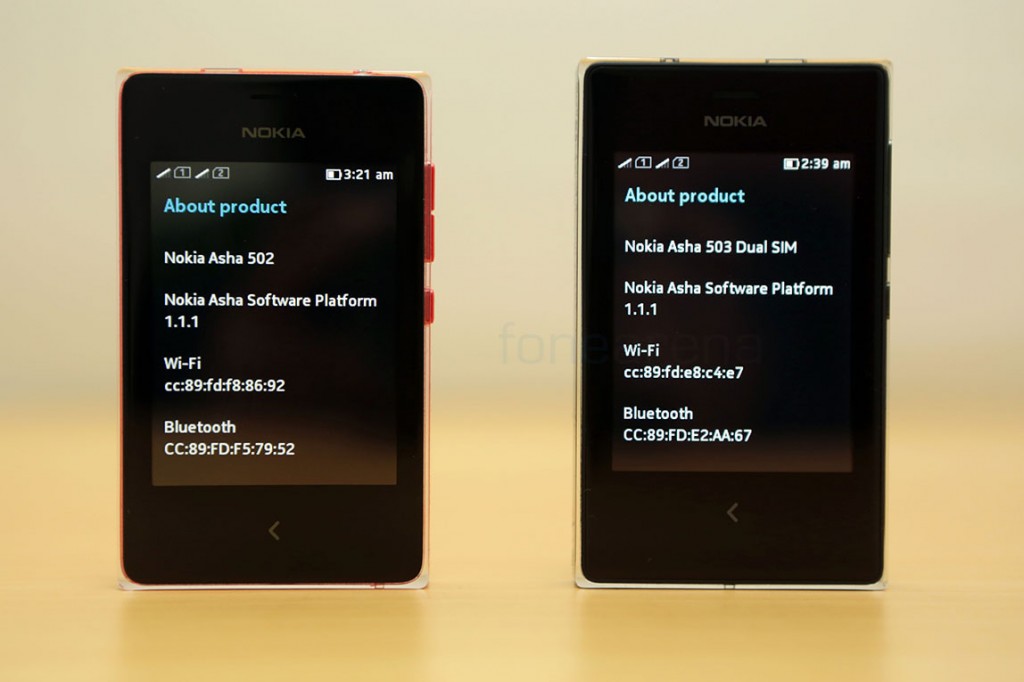 The above differences aside, both the Ashas are exactly the same. They run on the same new Asha SW Platform 1.1.1 and have new features like Whatsapp support and better privacy controls for the fast lane among many other small improvements. Both the phones are part of the same portfolio and are meant to offer different choices to the consumers in need of those. If you want 3G, Asha 503 is the one you should get, but if you are totally fine with 2G, the 502 is a great compact quasi-smartphone with Whatsapp, mails and even some small apps. The Asha 502 will cost you Rs. 5,969 while the Asha 503 will cost you around Rs. 6,799. Paying a small premium for the 3G functionality is entirely up to choice.

Here are some more pictures from the comparison, in case you still haven’t decided yet –

And that concludes our comparison between the Nokia Asha 502 and the Asha 503. We hope this helped you deciding on a purchase, let us know what you think, in the comments section below.