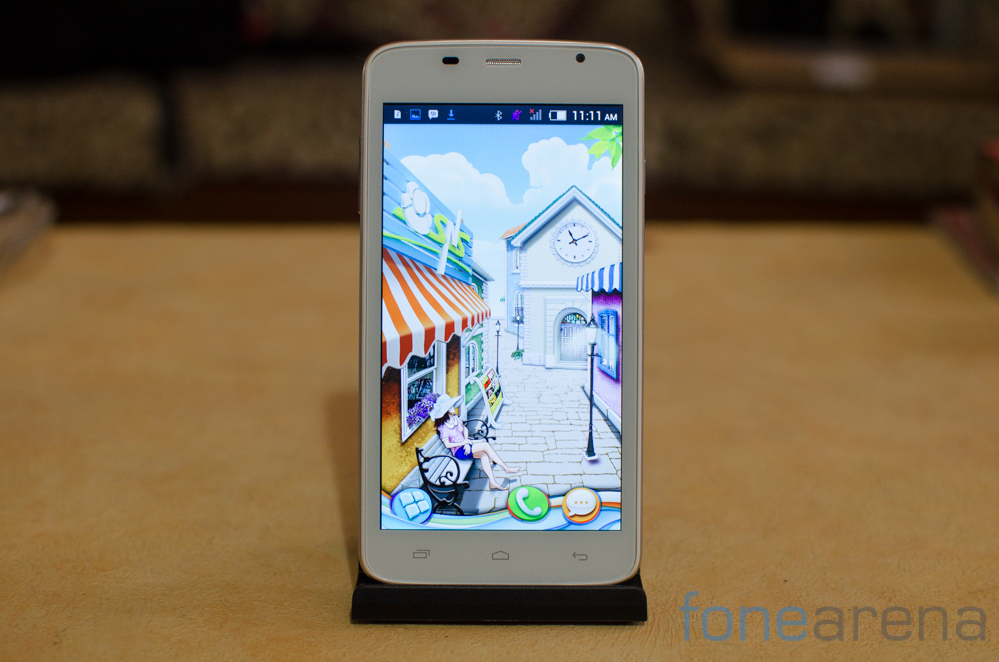 Spice has been at the forefront of India’s budget Android market almost since its inception. With some compelling releases over the past few years and months, it has been able to carve a niche for itself while facing stiff competition from Micromax, Karbonn and competition at large. Throwing its latest device into the budget Android device ring with the Spice Smart Flo Mettle 5x, the company aims to gain a foothold amongst the first time smartphone buyers. Will it succeed? We find out in our review.

There’s really nothing special about the looks of the Spice Smart Flo Mettle 5x other than the fact that it exudes quality. The front of the phone is the same as your typical entry level Android phone with a 5 inch screen taking up most of the real estate. Below it are three capacitive buttons that correspond to multitasking, menu and back. These are buttons are backlit and are fairly responsive. There’s a notification light built into the lower half of the phone, right below the capacitive buttons that lights up when there’s a missed call, email or a message. Depending on ambient lighting conditions, this light may or may not be visible. 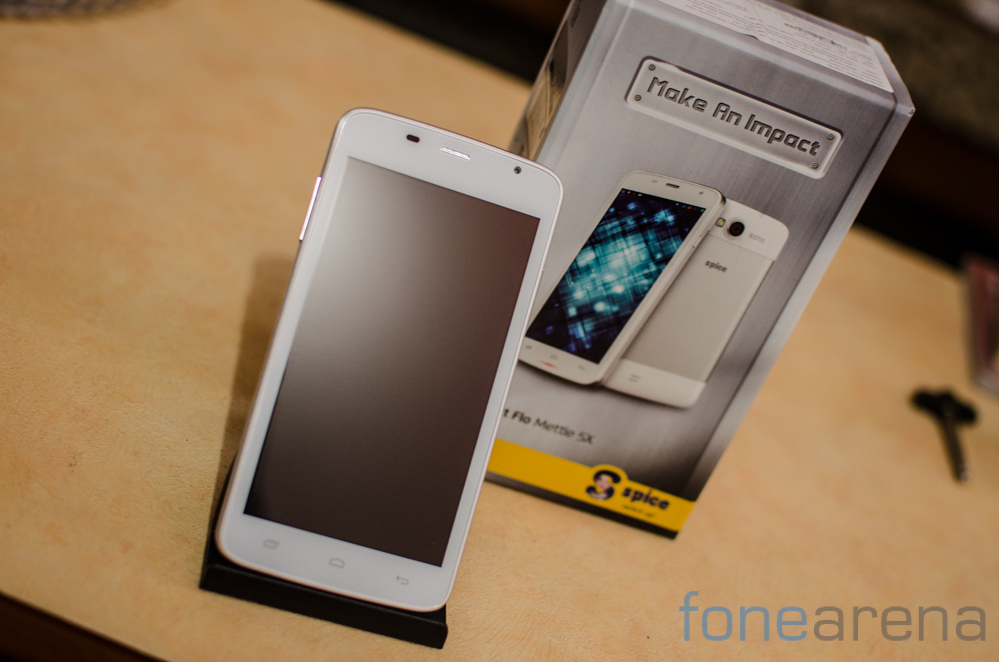 Up above the screen is the earpiece. It is flanked on either side by the ambient light sensor and the front facing camera. Bezels are manageable on the phone and the curved edges make the phone feel smaller than it actually. Spice has done a decent job with industrial design on the Mettle 5x and the plastic + aluminum build is something that we don’t really see very often in this category of devices.

The right side of the phone includes a lone power button that delivers very good tactile feedback. On the opposite side, you get a volume rocker that is made of polished aluminum just like the power button and feels good to touch. The top of the phone is where the microUSB connector lies alongside the 3.5mm audio jack. 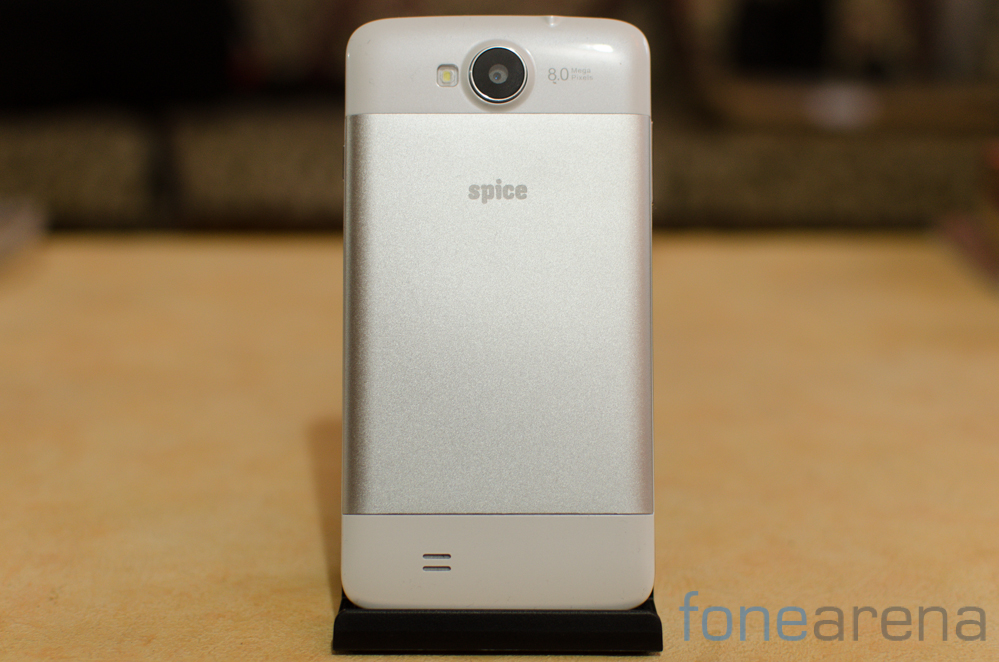 Moving over to the back, an aluminum backplate is laid between the plastic panels on either side. We’ve always liked the materials that Spice uses on its devices and the ceramic finish plastics here too bode well for the device while the matte finish backplate offers some elegance. The 8MP camera unit is inset at the top and is accompanied by an LED flash. 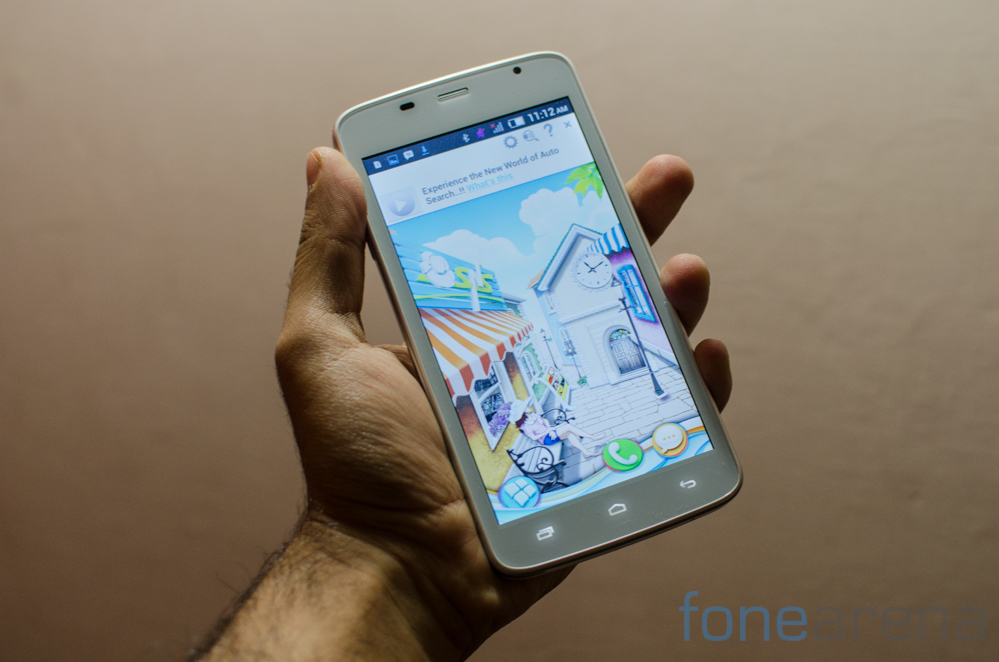 Overall, the Spice Smart Flo Mettle 5x is a fairly well built device that errs on the side of being rather heavy. Weighing 190 grams, it weighs significantly more than its competition because of the use of materials like aluminum. We feel that this is a fair tradeoff given the premium look and feel offered by said materials. We do wish that Spice had used the same ceramic finish plastic as at the back on the front panel as well. In comparison, the plastics on the front of the phone feel rather pedestrian. The phone’s dimensions are 148.5×78.9×10.4mm and we found it to be easily pocketable and that it fit well in the hand.The curved edges help in improving the ergonomics of the phone.

The default interface layer on the Spice Smart Flo Mettle 5x is horrendous. There’s really no other way to put this. The UI lags, is full of bloat and is harder to navigate than anything else we’ve used before this. Thankfully there is a way to switch over to a saner launcher. You can also of course set your device to use a third party launcher like Nova or Aviate which’ll perform much better. 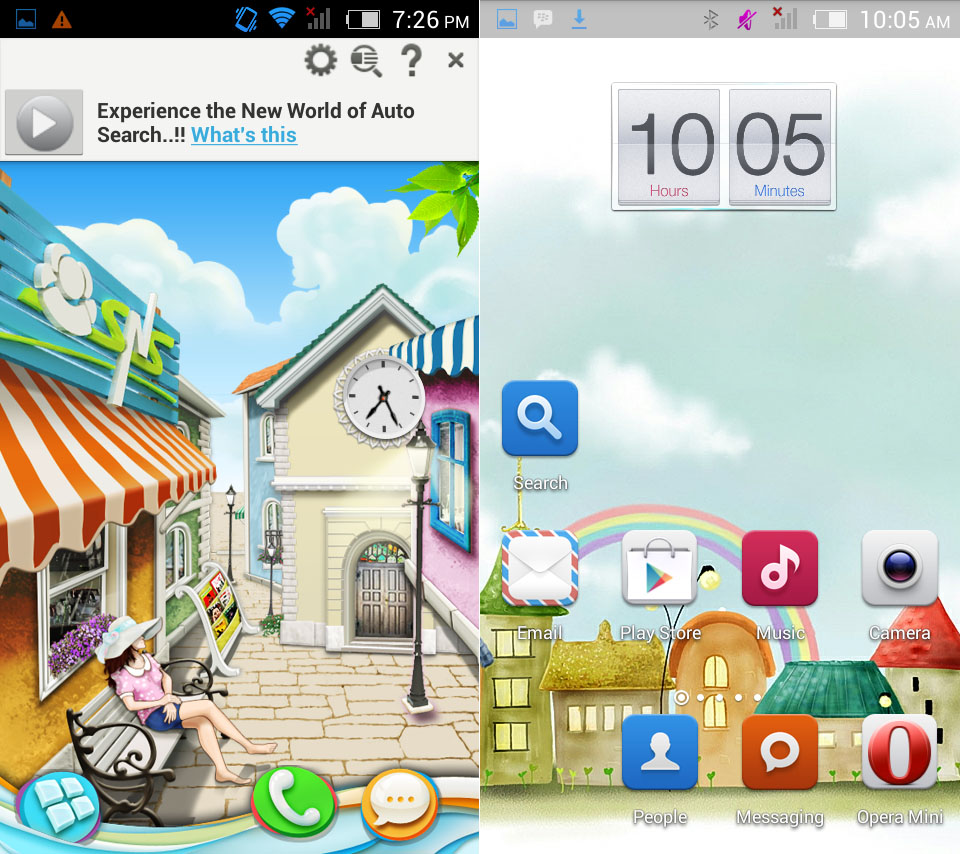 The operating system onboard is Android 4.2.2 with a very heavy skin on top as we’d mentioned earlier which we’d recommend switching out for a leaner skin as soon as you get the phone. You can have up to nine homescreen panes and you do get quick access toggles in the notification bar. 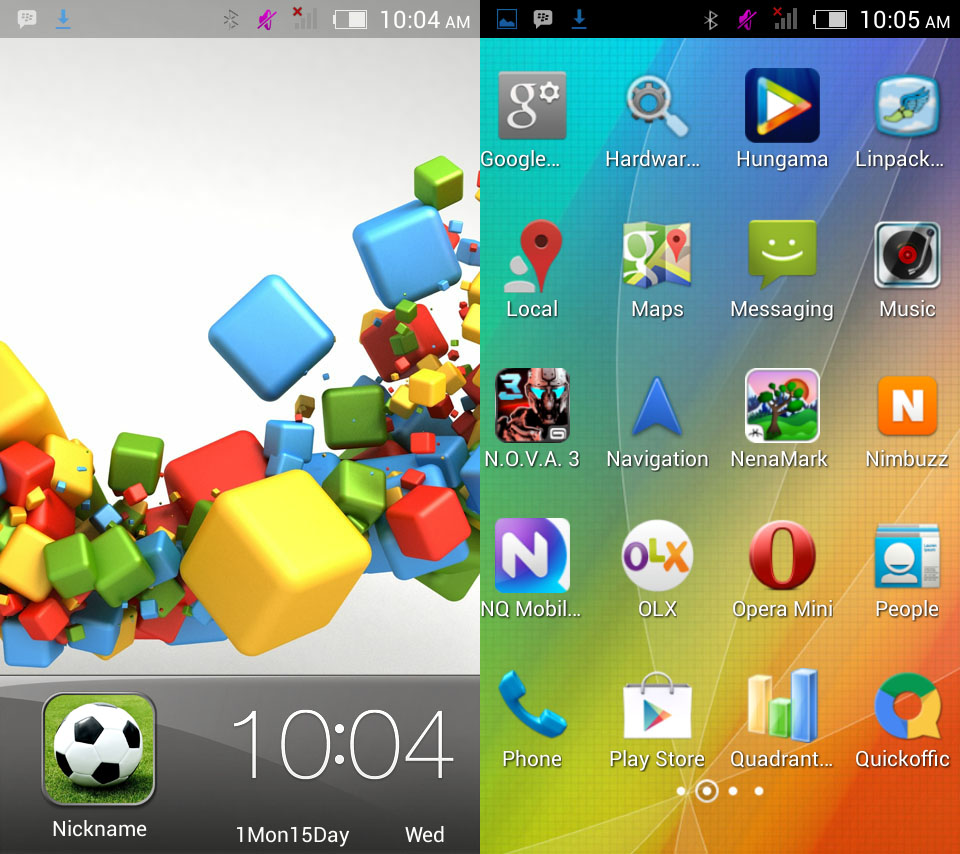 There’s a whole host of prebundled applications of which some might be useful for you. You get access to Facebook, WhatsApp, BBM, Nimbuzz, Hungama and OLX straight out of the box. Unfortunately Spice has once again loaded adware on its device that loads up a banner advertisement above applications and even in the interface. 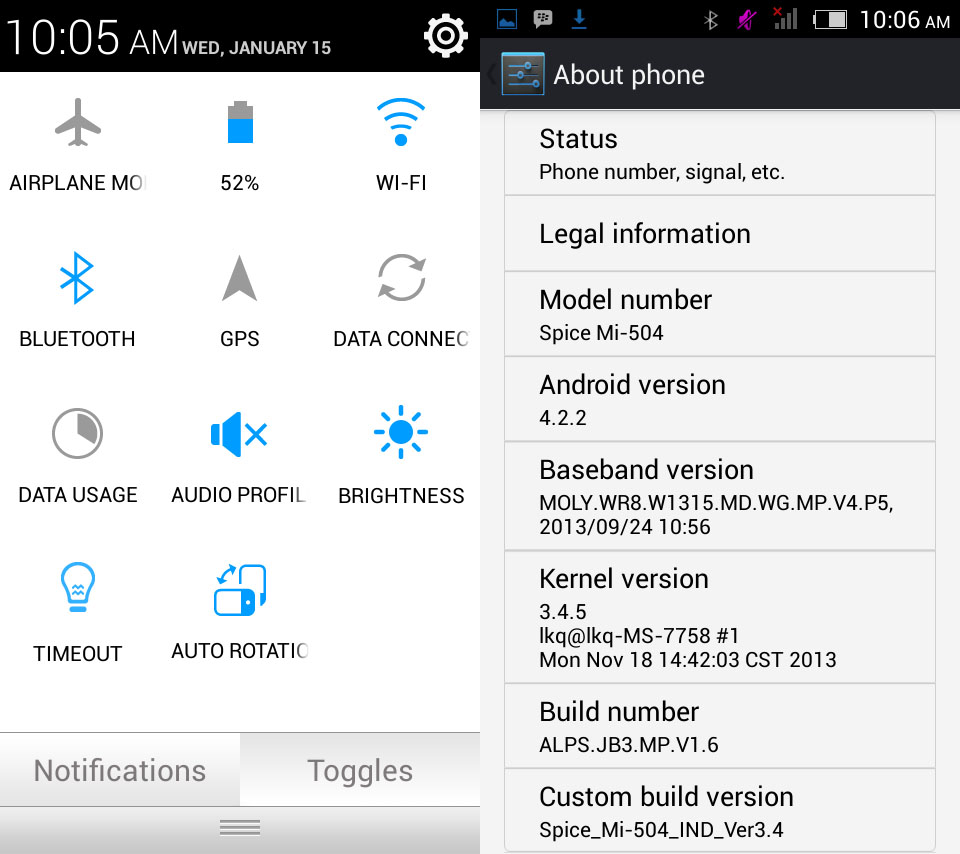 We’re not entirely happy with what Spice has done to the phone on the software front with the default interface layer being a complete clusterfuck. Looking beyond the poor UI desicions, the interface lags all around and is not particularly optimized for the phone. It will also not let you install any widgets with the only choice being to swap between an iPhone style  layout or the graphic and animation heavy alternate.

Our expectations from the 1.3Ghz Dual Core MT6592 processor were admittedly low. Paired with 512MB RAM, the phone is far from a multitasking beast. The interface itself suffers occasional lags while apps take their own sweet time to load up. In day to day web browsing, we noticed significant checkerboarding while loading popular websites. Games like Temple Run 2 prove to be a challenge for the device as it results in skipped and dropped frames to keep up with gameplay. We put the Spice Smart Flo Mettle 5x through our benchmark process as well and here are the results. For complete benchmarks, follow through our post on the Spice Smart Flo Mettle 5x benchmarks. 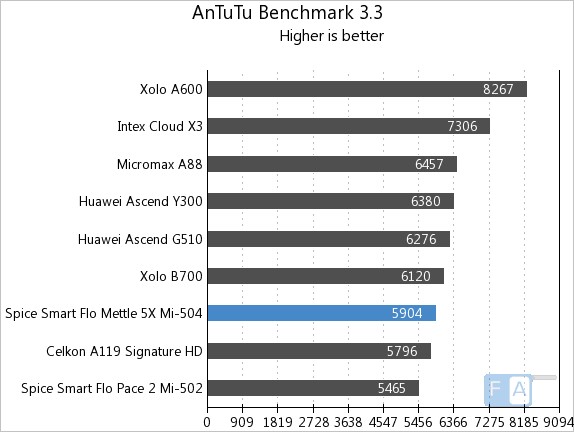 In the popular AnTuTu benchmark, the device ranks towards the bottom of the pile with a score of just 5904 points. 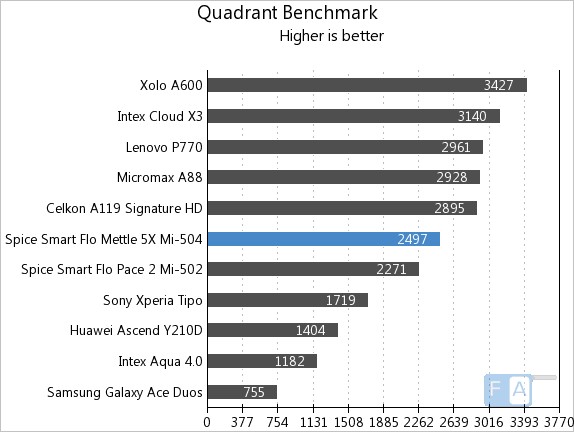 The phone ships with a 5inch screen that has a resolution of 480 x 854 pixels that results in a pixel density of 233 ppi. We really can’t complain much about the quality of the display given the price point. 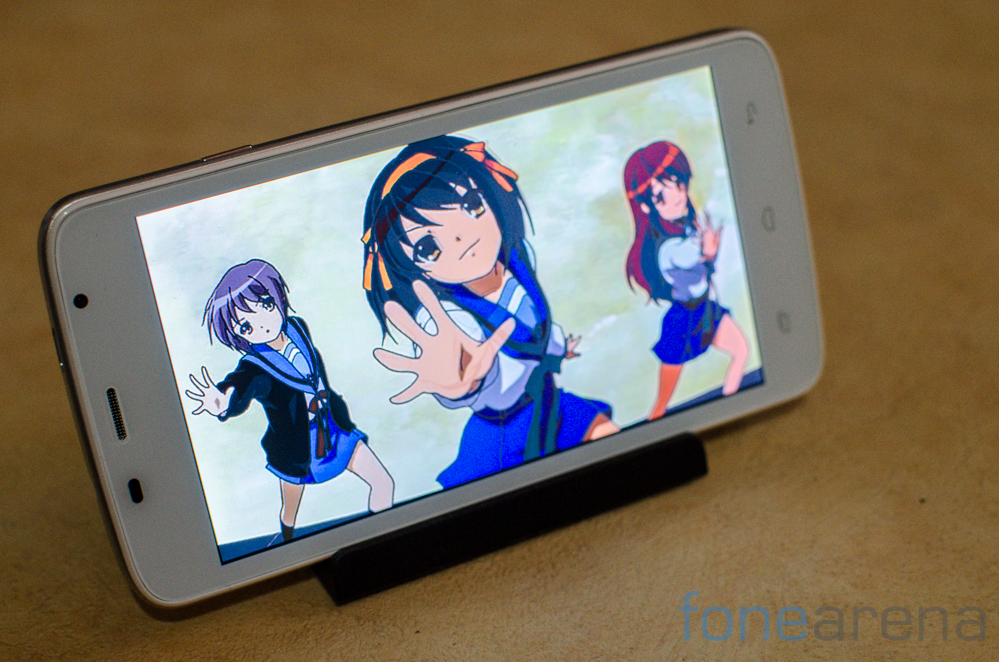 Spice has built in an 8MP rear facing camera on the phone and you also get a 1.3MP front facing unit. Stuffing an 8MP sensor in a sub 10,000 rupee phone should make it quite apparent that compromises have been made. Our experience with the camera on the Spice Smart Flo Mettle 5x was fraught with disappointment. Not only is the camera very slow to take a photograph, the end results leaves a lot to be desired.

Outdoors in decent lighting, images show a large amount of grain. Focussing on the phone is extremely slow and the device struggles to get a focus lock in anything other than perfect lighting. Photos taken in less than optimal lighting also have a huge amount of noise and are generally out of focus. Another issue that cropped up quite often was digital artifacts in images added during post processing. You can notice it in the sample above.

Video recording tops off at VGA (640×480) resolution with a bitrate that averages around 5.5mbps. Videos are underexposed and lack quality. Over all the camera module on the Spice Spice Flo is good enough only for when you have nothing else to shoot with.

Music playback on the Spice Smart Flo Mettle 5x is above average. Most popular codecs are supported by the built in music player and it also thrown in an equalizer to the mix if you want to tune audio to your liking. We were able to play back MP3, AAC, WAV, FLAC audio without a hitch and audio quality is fairly deecnt too. It won’t satisfy audiophiles but we really don’t think this device aspires to do so either. Video playback is where the phone does show some concerns. Not only does it have trouble playing videos other than avi and mp4 files but the files were also a hit or miss based on the bitrate. The highest resolution videos we could get running on the device were 720p files with low bit rates of around 2-3mbps at max. Any higher and we experienced skipped frames making the video unenjoyable.

The Spice Smart Flo Mettle 5x is powered by an 1800 mAh battery pack which is rated for 4 hours of talktime. Considering that the phone does not have 3G connectivity, we could get over a day of usage out of it. You mileage may vary but it is definitely possible to get about a day and a half of usage time if you tweak the settings a bit. 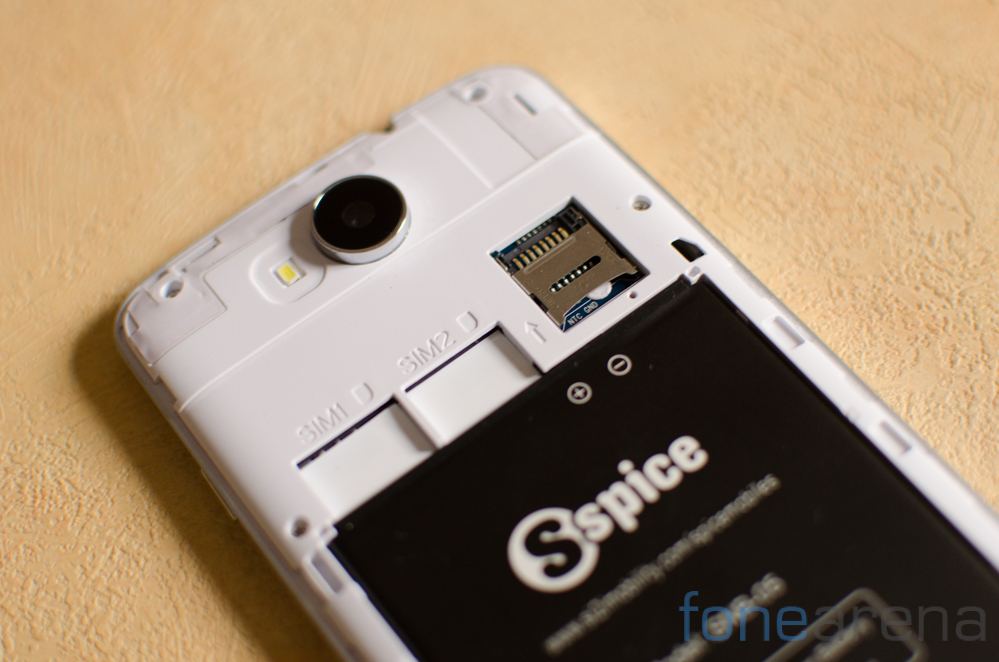 Connectivity options include bluetooth 4.0, GPS / aGPS and WiFi. The handset is of the dual SIM variety and both slots support GSM connectivity. Unfortunately the device loses 3G connectivity altogether which is a pretty big strike against it. You get 4GB of storage of which about 2GB is available but you can expand it via the microSD card slot.

Despite its above average looks, the Spice Smart Flo Mettle 5x is a budget Android device through and through. We really liked the ceramic like plastics and the liberal use of aluminum in the construction. 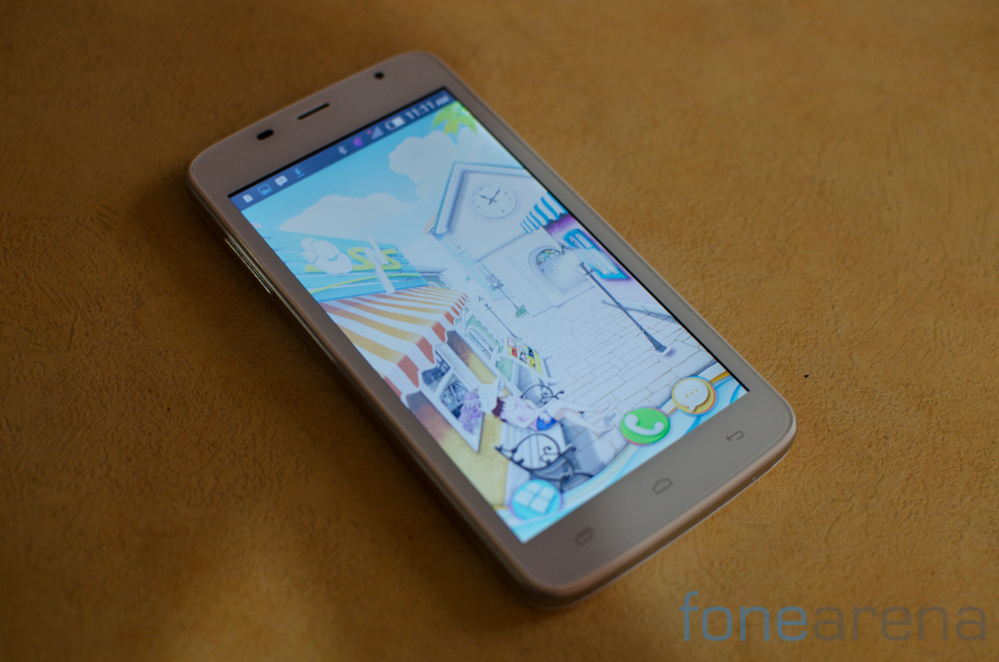 However, the rather tacky interface and overall lacking performance cannot be ignored. Double the amount of RAM would’ve helped the handset a lot. The camera too disappoints due to its rather awful allround performance. Even if you look past the interface which can be spruced up with a third party launcher or the poor camera, we really can’t recommend the device as it lacks 3G connectivity altogether. The phone is available at a price point of Rs. 6,499.