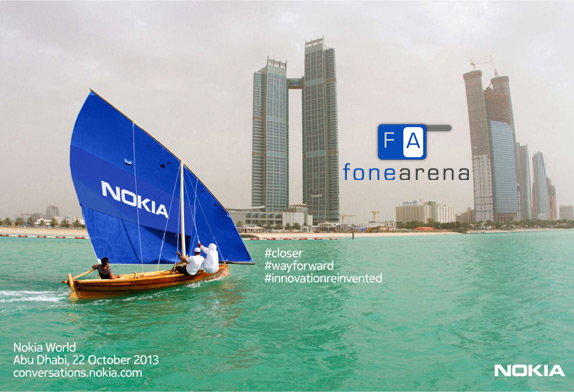 We are here on ground live from Abu Dhabi , UAE which is the city hosting the Nokia World 2013 event. Stay tuned to this page to catch all the action and announcements from the show floor including the rumoured Lumia 1520 and 2520. We will be bringing live updates from Nokia World 2013 on this page.We just grabbed our badge and also grabbed a seat right in front of the stage ! Hope the internet at the venue holds up and our 3G connection  holds steady! Watch the Nokia World 2013 live blog below –

What are  you expecting Nokia to announce at this event ? We might finally see a Windows Phone with a Quadcore processor and full HD display and finally catch up with the competition from the Android phones out there. Do let us know what you think of the recent rumours floating around about a Nokia Phablet and a Windows powered tablet! We are excited and sad at the same time. This is probably the last Nokia World but it is surely one of the biggest ones ever!