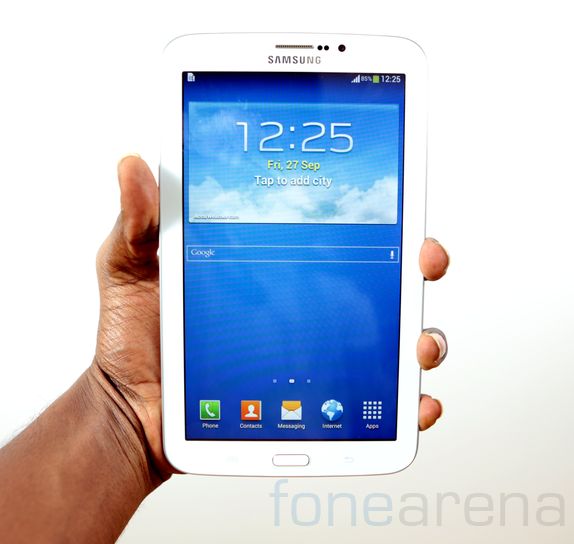 Galaxy Tab 3 T211 is the successor of the Galaxy Tab 2 (7inch version) and has been upgraded to match the styling of the latest generation of Galaxy devices. Unlike other upgrades, the Galaxy Tab 3 T211(and T210) is the only device that did not get the software update and launches with a relatively old Android 4.1.2 Jellybean out of the box.

Samsung Galaxy Tab 3 T211 looks like any other Galaxy device with an all plastic build and a faux metal rim running across the entire length of the device. The glossy back makes the tablet slippery and prone to fingerprints. The back cover isn’t quite solid and when pressed, it goes back a little bit and raises the question of a proper design.

On the front, above the display, we have the earpiece above the Samsung logo and the proximity and ambient sensors right next to it. The front camera for video calls is also right next to the pair of sensors. The display occupies the majority of the front side, but the bezels aren’t as thin as we would have liked. The thick bezels do have their advantage as you can hold the device with a single hand while reading and your finger won’t get in the way. 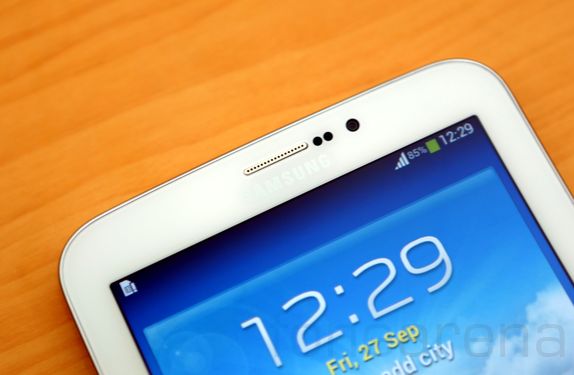 Below the display, we have the usual Samsung combination of a physical home button and capacitive touch keys on either side. The home button feels premium as it is surrounded by a faux metal rim. 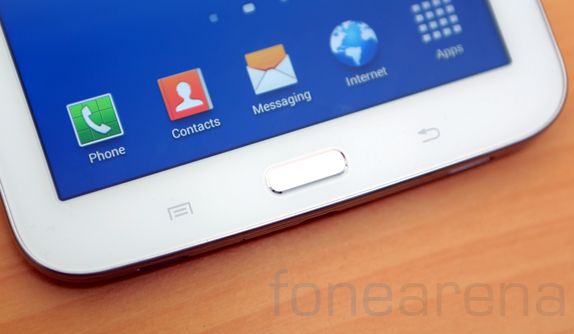 On the right side of the tablet, we have the secondary microphone, below which we have the power lock key and the volume rocker. The keys are made of plastic and offer good feedback.

On the left side, we have the covered microSIM card slot and the microSD card slot.

At the top, there is just the 3.5mm audio jack. 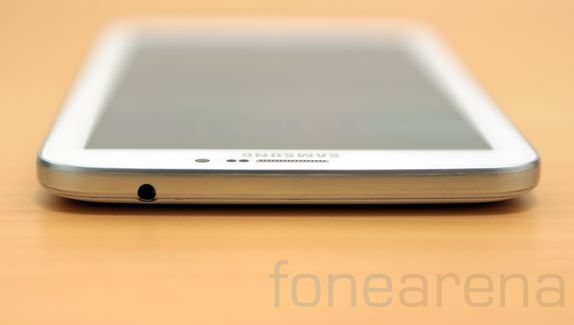 Moving to the back of the device brings us to a familiar territory of glossy and slippery plastic. The curved edges offer nice grip although the plastic feel tends to ruin that. There is a 3.2MP camera at the top center without any flash. There is the Samsung logo below it and at the bottom, we have certification information. Other wise, the back is very simple. 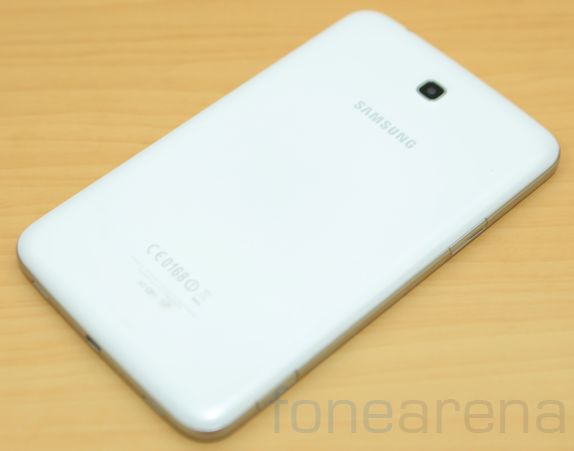 Overall, the build quality is typical Samsung – all plastic, but durable.

The Samsung Galaxy Tab 3 T211 comes with a 7inch display TFT capacitive touch screen display sporting a resolution of 600×1024 pixels. The resolution of 600×1024 pixels stretched across the 7inch display makes the display look mediocre because of the average pixel density of 170ppi. The 5-point mulit-touch display has very average viewing angles. The brightness levels are good, but other than that, other aspects like color-reproduction, contrast, saturation are a let down. 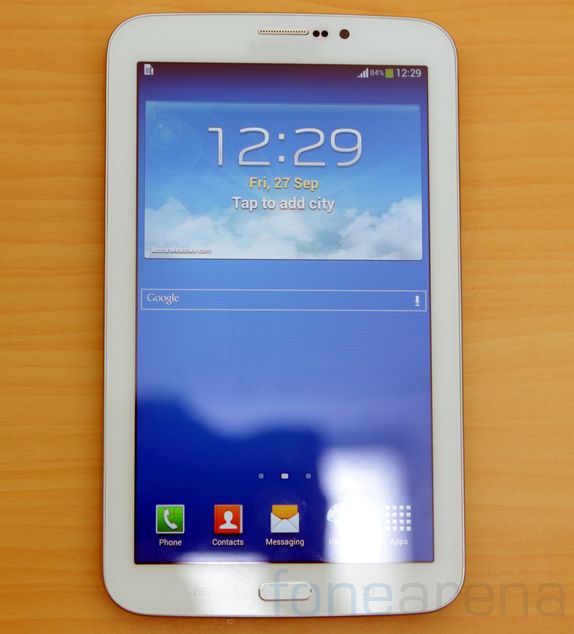 Overall, the display on the Galaxy Tab 3 T211 is below average. 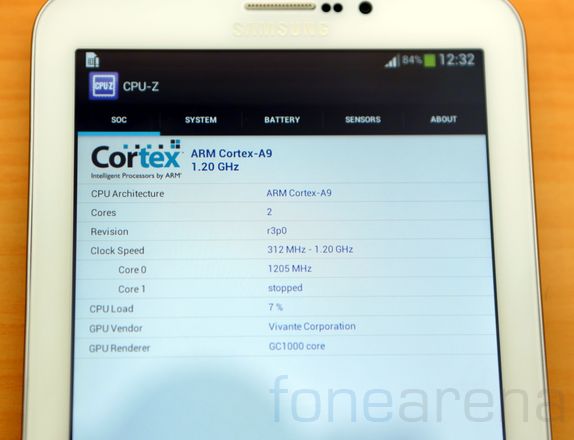 The Galaxy Tab 3 T211 is available in 8/16GB variants(we have the 8GB version) and has a microSD card slot for expansion of internal storage. Out of the 8GB internal storage, around 5GB is user accessible. 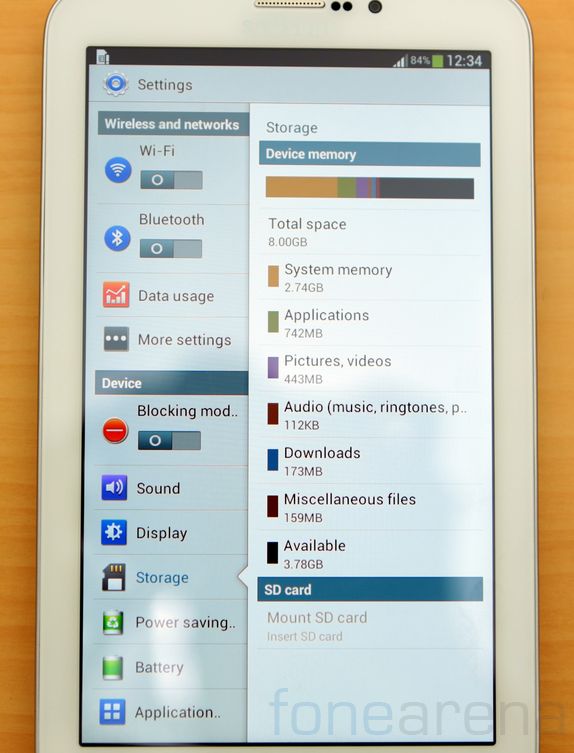 Out of the 1GB RAM, 833MB is available for usage and when the device is idle, around 450MB is free. 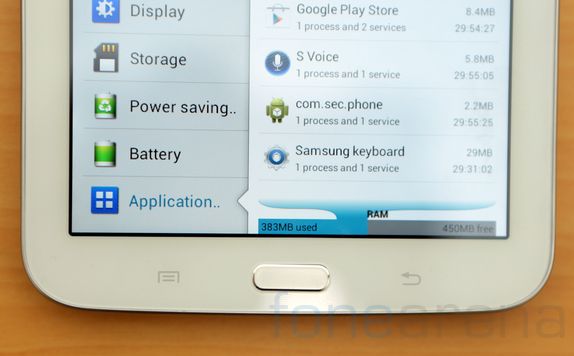 In terms of performance, the UI seems very sluggish and is definitely not smooth. Even a small operation like opening the app drawer takes some time. Opening apps and switching between apps definitely takes its toll on the processor.

In terms of benchmarks, Galaxy Tab 3 T211 performed decently as you can see below 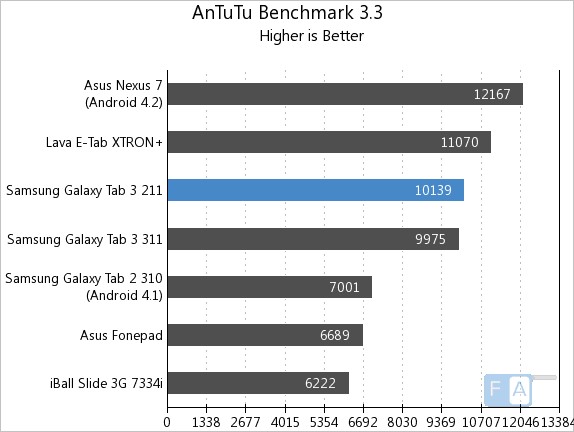 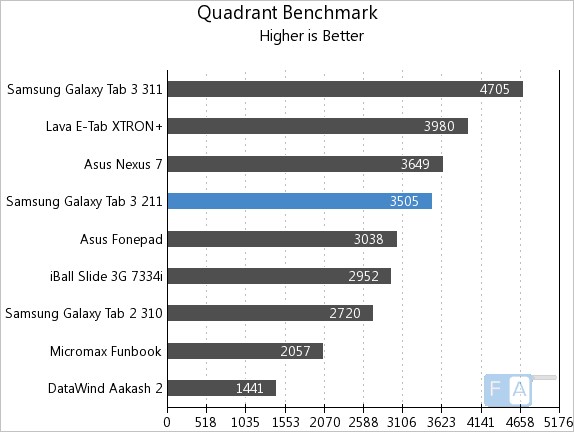 To know more about the performance capability of Galaxy Tab 3, you can check out our benchmarks post or watch the benchmark video right below. 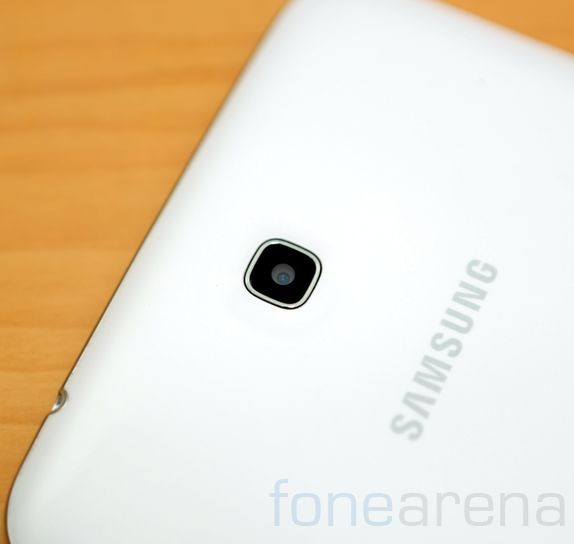 The camera UI is traditional Samsung UI with separate screens for photos and videos. On the left side of the viewfinder, we have various options such as front/rear camera toggle, mode selection, timer settings, effects, exposure settings and settings icon. On the right side of the viewfinder, we have the photo/video toggle mode at the top, the shutter key below it and the shortcut to the recent photos at the bottom. There are a few shooting modes like Panorama, Smile shot and Buddy photo share. The camera options are quite decent given the low 3.2MP camera. 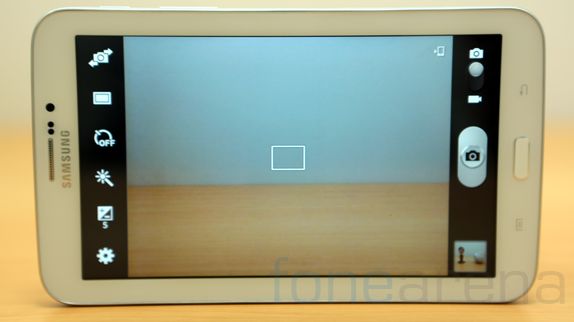 In terms of details, the images come out good with nice details although there is no auto-focus. The colors are good and for a 3.2MP, the performance is good.

You can check out the samples below.

In terms of gaming performance, Galaxy Tab 3 T211 does good. Most of the games come out well. We threw a mixture of games at this tablet and for most of the times, the performance was par. We tried out games like Asphalt 7, Dead Trigger, Shadow Gun, Modern Combat 4 and Riptide GP 2. Asphalt 7 was particularly smooth, but the graphic details were pretty low, but the gameplay was enjoyable. The other games did come out well, but there were occasional lags and jitters. You can check out the gameplay video right below.

The gaming performance of Galaxy Tab 3 T211 is good. Check out the gaming review below.

Unlike other Samsung Galaxy devices that were launched in this year, the Galaxy Tab 3 T211 runs on an older version of Android – 4.1.2 Jellybean. Like other Galaxy devices, Android is overlaid by Samsung’s very own TouchWiz UI that adds a bunch of features like notification toggles. 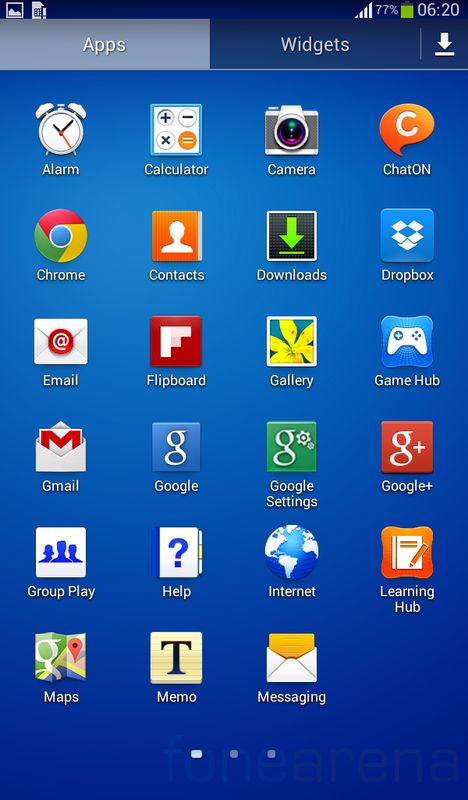 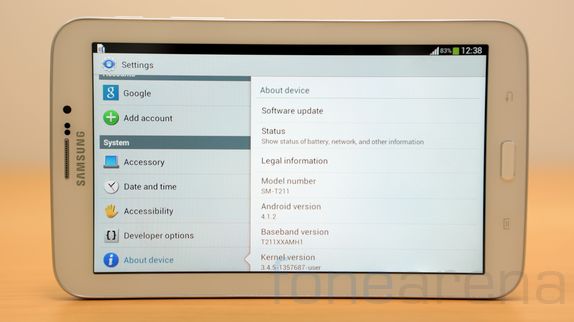 Since this tablet comes with SIM support, you can call or text right from the tablet. Call quality was predictably good with the loudspeaker coming in handy, literally. Also, unlike a phone, it is not immediately apparent where the ear piece is and since there is a large surface area in which the ear piece sits flush. Getting used to seems to be the only way, or you can always use a Bluetooth headset.

Samsung Galaxy Tab 3 T211 comes with a 4000mAh non-removable Li-ion battery. The battery performance of the tablet is good. With 3G on, the tablet should last a day for moderate use. For heavy usage, the battery life would drop down to 10 hours. 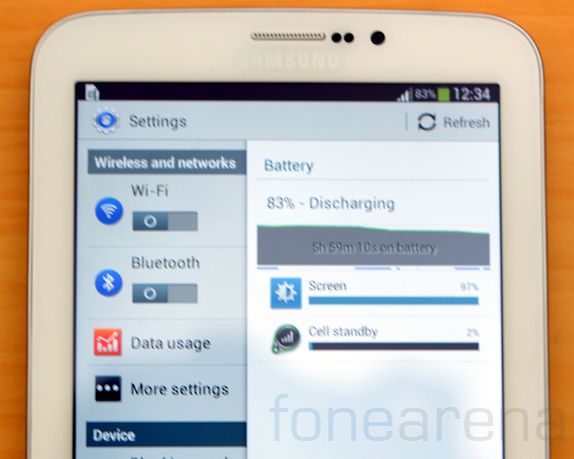 In terms of connectivity options, Tab 3 T211 is equipped with WiFi, 3G, Bluetooth, microUSB, GPS and DLNA. There is no FM Radio which is a small disappointment. Unfortunately, Galaxy Tab 3 T211 does not charge when connected to a PC. 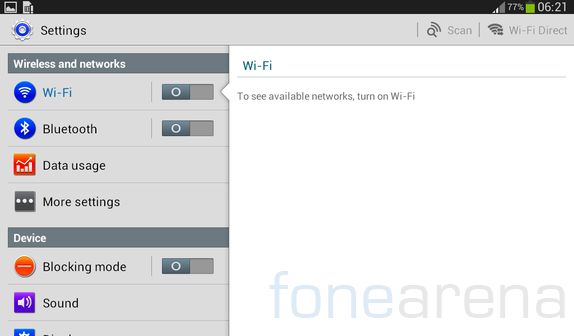 Browsing is good on the big display despite pixelation of text. 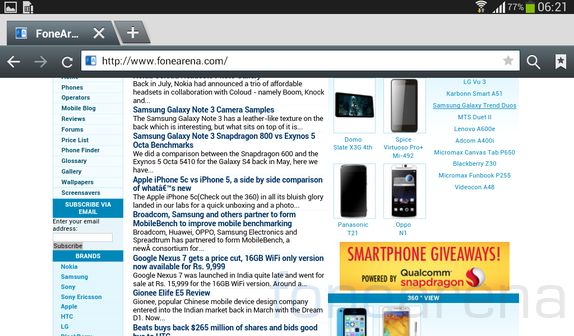 Samsung Galaxy Tab 3 T211 is mainly aimed at budget buyers who seek to get the most out of a price, but can compromise on the performance. Galaxy Tab 3 T211 offers most of the smartphone features and comes with a big 7inch display which should be good for media consumption and gaming. Overall for a price of Rs. 16,900, you could get a lot more out of a smartphone instead of this tablet. The WiFi only version T210 is a good buy for Rs. 12,499. 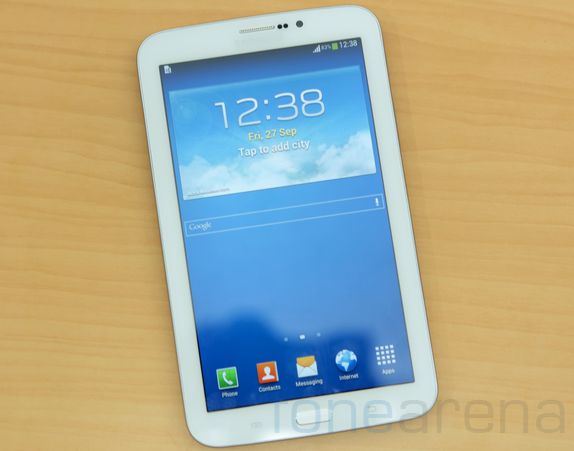