Samsung has a wide range of Android smartphones in the form of its Galaxy series and it even touched the 6inch+ phablet territory with its Galaxy Mega 6.3. LG announced the Optimus G Pro with dimensions similar to Samsung’s yesteryear phablet champion – the Galaxy Note 2. 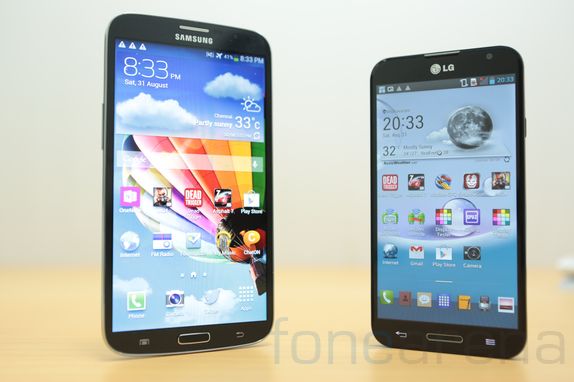 Samsung announced their Galaxy Mega 6.3 at the end of May earlier this year  and it has been available since June. LG announced the Optimus G Pro way back in February, but it was launched in India only in India to very little fanfare. The Samsung Galaxy Mega is on its way to become the most wanted big phone while Optimus G Pro tries to succeed as a LG smartphone.

Lets check out how they perform.

The Galaxy Mega 6.3 looks like any other Samsung Galaxy phone and has an all plastic build with a plastic aluminum running across the device. The LG Optimus G Pro, on the other hand, has a solid glass front and back supported by a solid and heavy metal rim at the center . The Optimus G Pro feels quite solid and feels extremely premium than the huge and sturdy all plastic Galaxy Mega 6.3.

On the front of the phones, we have the display above which we have the earpiece and front cameras along with ambient and proximity sensors on the right side. The earpiece on the LG Optimus G Pro is along the edge. 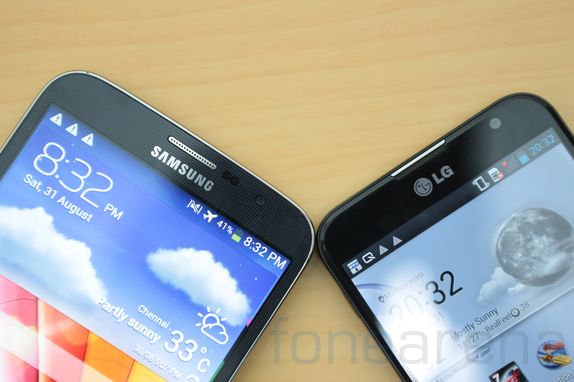 Below the display, we have a physical home button with capacitive touch keys on either side on both the phones, but the home button is surrounded by LED light only on the G Pro. The LED notification is found on the left side of the earpiece in the Galaxy Mega. 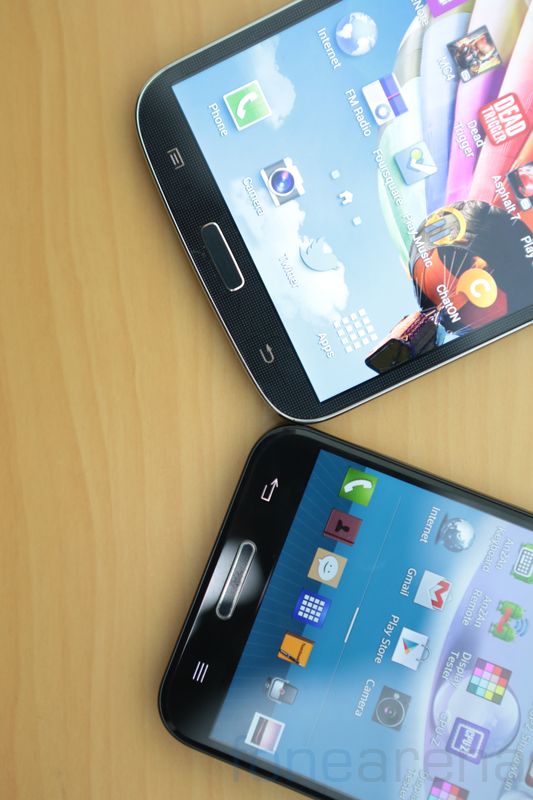 The positioning of keys is similar with only the power lock key on the right side. 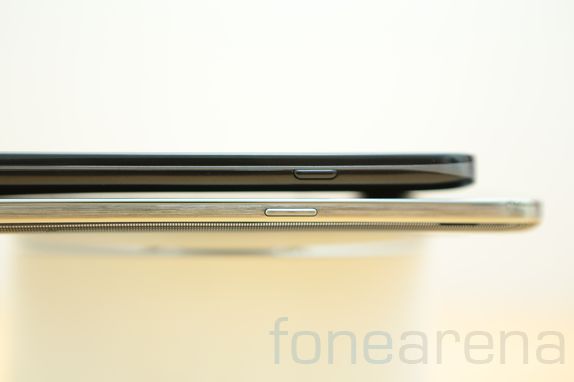 The bottom of both the phones have the microUSB port and the microphone. 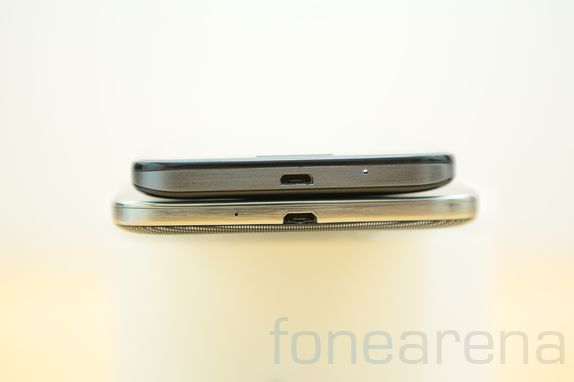 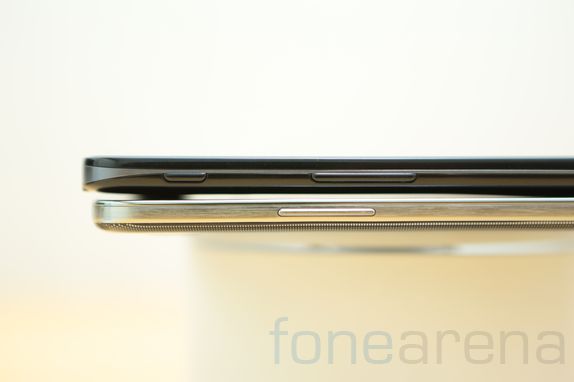 On the top, we have the IR blaster and 3.5mm audio jack along with secondary microphone on both the phones. 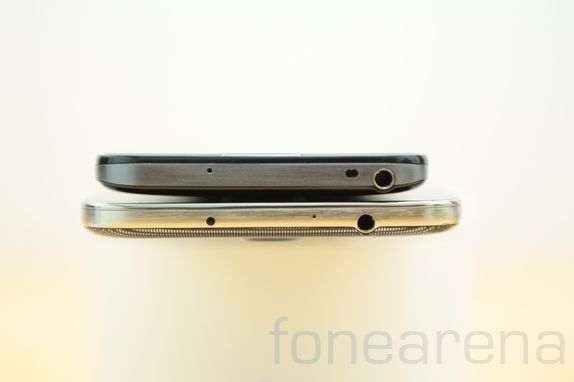 Moving to the back side, the 8MP camera on the Galaxy Mega is  at the top center along with the LED flash while we have the 13MP camera  on G Pro with LED flash and speaker grill on its sides. Both the phones have a very glossy textured back, however, we liked the glassy finish on the G Pro. 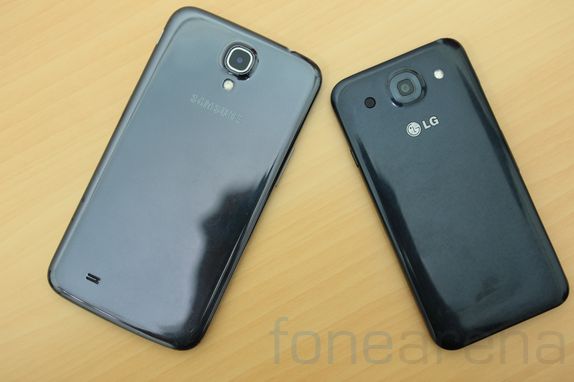 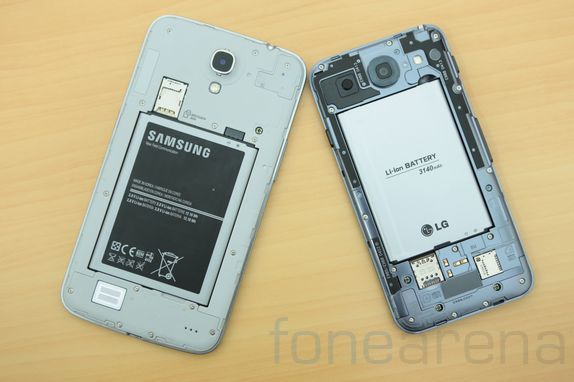 Overall, the LG Optimus G Pro has a very premium finish and solid build quality while the Galaxy Mega has a more common all plastic build which makes it less solid. 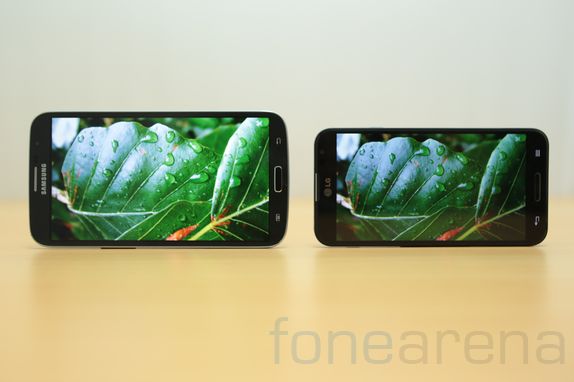 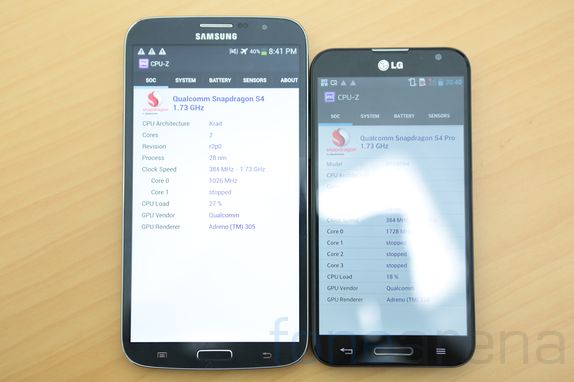 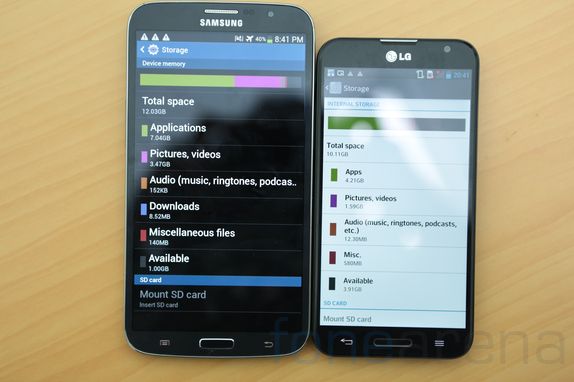 The faster processor and more RAM give the LG Optimus G Pro a big upper hand in terms of performance. The G Pro is smoother and faster in opening apps and switching between them.

In benchmarks, the Galaxy Mega 6.3 is no competition to the LG Optimus G Pro. 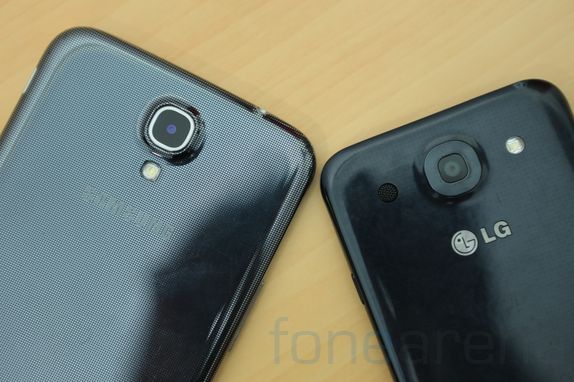 The camera UI is different on both the phones as it is always the case with Samsung and LG phones. The camera app on the Galaxy Mega 6.3 is borrowed from Samsung’s Galaxy S4, but it does not have all its shooting modes. The LG Optimus G Pro’s camera app is better than it was on the Optimus G and has more shooting modes. It can record dual videos(both front and rear camera) and there is a HDR mode for videos as well. 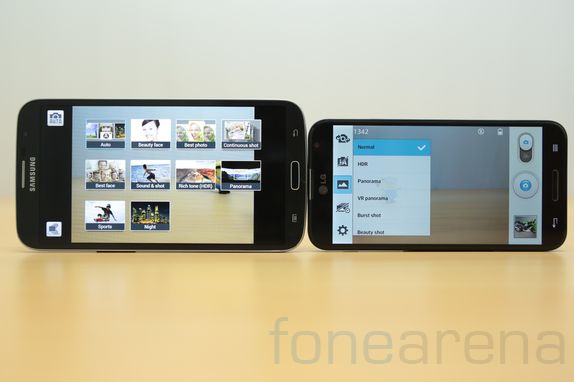 In terms of image clarity, the Optimus G Pro was much better with less noise, more details, better contrast and true colors.

Galaxy Mega 6.3 has the Samsung’s custom TouchWiz UI on top of it while LG Optimus G Pro has LG’s own UI. Underneath, the Galaxy Mega runs on a more recent Android 4.2.2 Jellybean while the G Pro is still stuck on Android 4.1.2 JB. So, features like quick toggles in the notification bar, lockscreen widgets and other under the hood optimizations are currently restricted to Galaxy Mega until Optimus G Pro gets a software update from LG. The Galaxy Mega has a lot of Samsung software goodies like Smart Stay and Multi-window, Samsung’s Beam while the Optimus G Pro comes with its own version of those features like Q-Slide. There are small floating apps that can be used in LG’s phone which reminds us of Sony’s small appss.

Galaxy Mega 6.3 is better in terms of software features.

Both the phones are quite good for gaming and the Galaxy Mega was mainly good because of its bigger screen. All the games ran smoothly on both the devices although there were a few occasional glitches on the Galaxy Mega, but the gameplay experience was good. The Optimus G Pro is an excellent device for gaming as all the games ran lag free and very smooth. After continuous gaming, we noticed that the Optimus G Pro got heated up near the home button.

The Galaxy Mega 6.3 has a 3200mAh battery while the Optimus G Pro has 3140mAh battery. In terms of battery life, the bigger battery in the Galaxy Mega is definitely better as it has to power a relatively low resolution display and less power hungry chipset.

In terms of connectivity, both the devices are equipped with features like WiFi, Bluetooth, 3G, NFC, WiFi Direct and microUSB(MHL) connectivity.

LG Optimus G Pro was meant to be LG’s bet in the phablet market and it pretty much gets the job done. The Samsung Galaxy Mega on the other hand was not Samsung’s flagship with top of the shelf features, but it was meant to be a huge phone with decent specifications and it does pretty well. 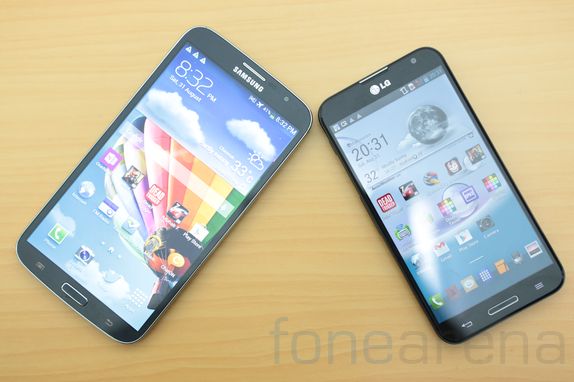