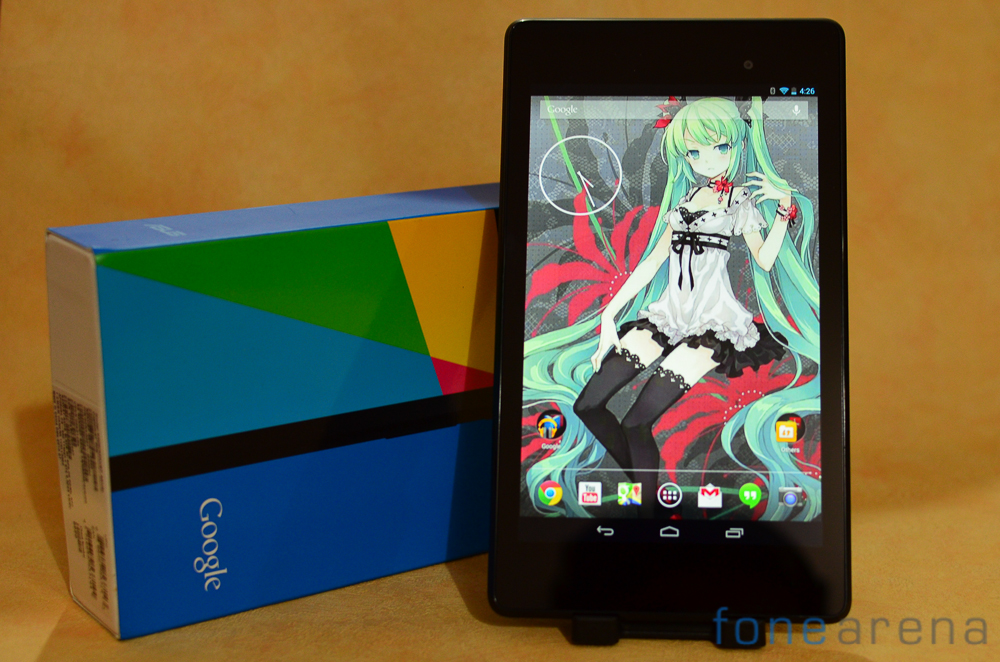 Google’s Nexus program is aimed at providing an Android experience the way the California based company meant it to be. Now in its second iteration, the Nexus 7 manufactured by Asus is sharper, faster and just a bit more expensive. Does it still pack the same value and punch that made the original perhaps the best Android tablet on the market ? Read on to find out.

The new Nexus 7 has been designed by Google and ASUS with a focus on familiarity but it doesn’t mean that there are no improvements. All around you’ll see subtle and some not so subtle tweaks that enhance the experience for the most part. The dimensions come in at 200x114x8.7mm which makes it slightly taller but both slimmer and narrower than the original. Even the weight has dropped down to 290 grams which definitely makes it very handy for long term use. 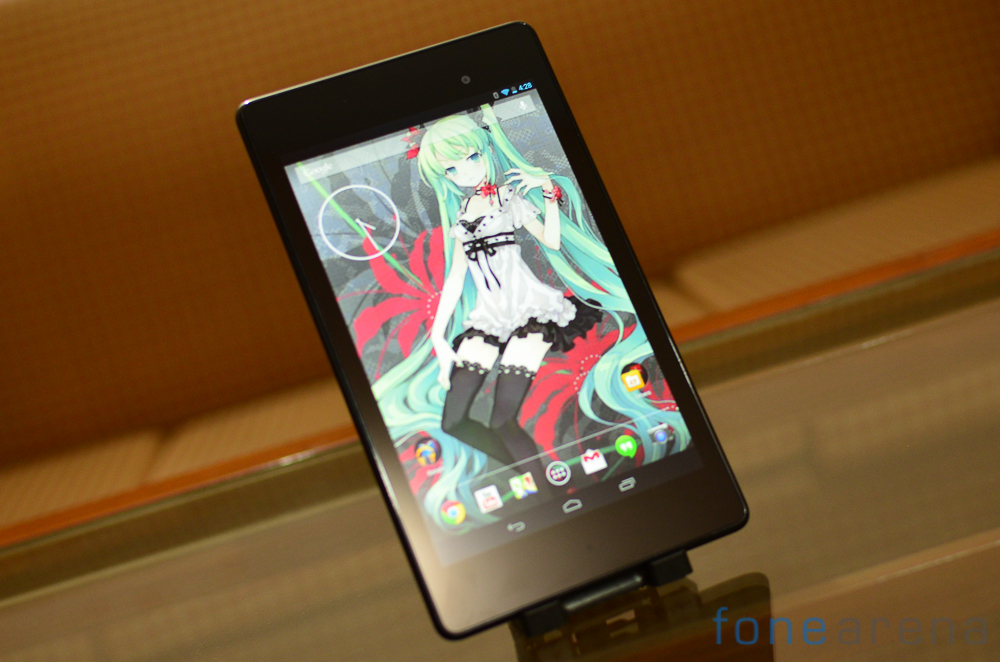 The tablet is all black all around and the quality of materials used is very good. Over at the front you’ll spot a 7 inch display with very narrow bezels. Measuring just 2.75mm on either side, the tablet really seems geared towards landscape usage. Above the display is a 1.2MP front facing camera. There are no capacitive buttons and all interactions are done via the onscreen controls. The bezels at the top and bottom of the tablet are particularly wide and could do with some slimming down in the next iteration. The 16:10 aspect ratio of the display further accentuates the fairly odd looking proportions of the Nexus 7 wherein it appears just a bit too long when held in portrait mode.

Over on the right side of the tablet is the power key and the volume rocker below it. We felt that the buttons were a bit hard to press given the slim profile of the tablet and the way the buttons wrap around the edge. Along the bottom and top edge are vents for the stereo speakers. A micro USB slimport connector is also placed here between the two speaker vents. The headphone jack is along the top edge of the tablet. 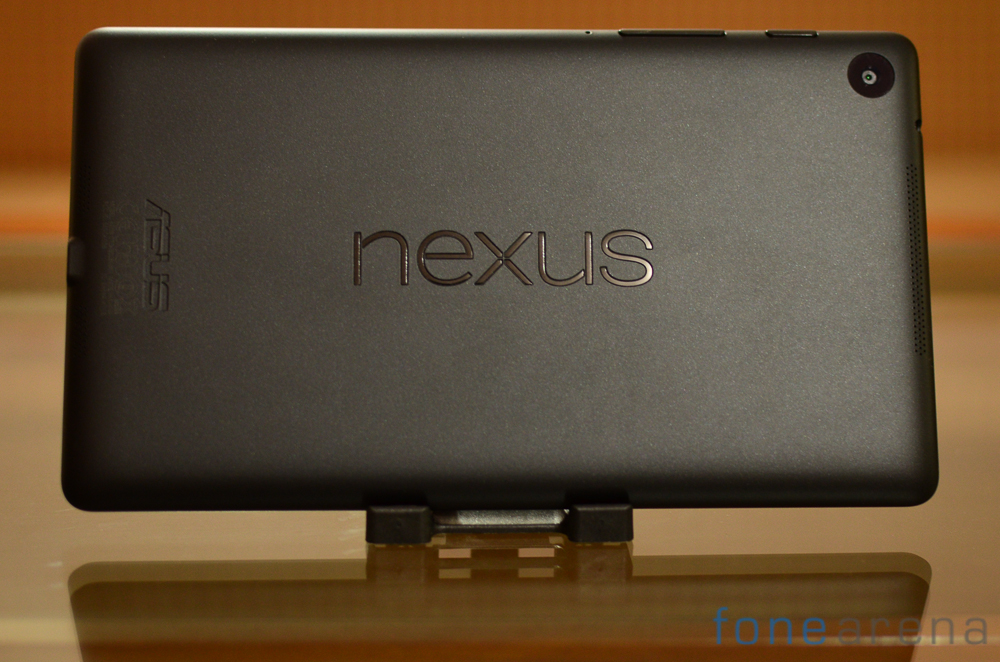 Moving over to the back of the tablet you’ll find a very interesting matte finish on the plastic material. While not as grippy as the rubberized material on the previous generation device or even the BlackBerry Playbook, the material feels premium and doesn’t attract many fingerprints and that is something that we can always appreciate. Towards the top left corner lies the 5MP camera. There is no LED flash here. The Nexus logo is placed vertically along the center of the back of the tablet. Below it, placed horizontally, lies the Asus logo.

This being a Nexus device, it runs stock Android through and through. As such it is one of the few devices out there running Android 4.3 Jelly Bean. The updated version of the operating system essentially deals with plugging up holes and improving existing features. 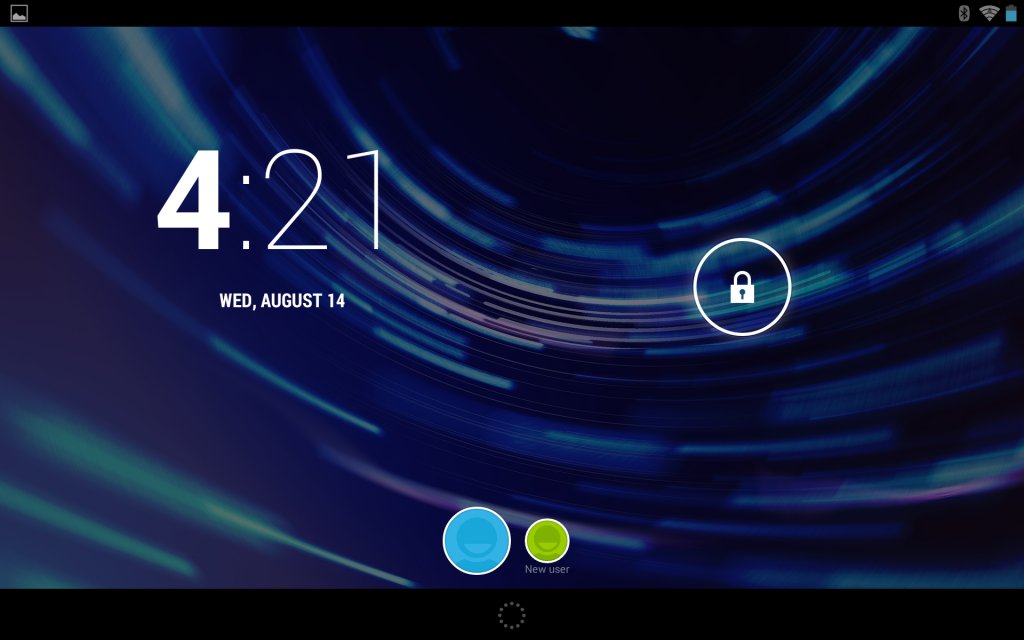 In particular the multi user capabilities (tablet only) have seen a significant overhaul and it is now possible to add passwords, lock applications on a per account basis. The other big improvement is added support for new Bluetooth profiles. These include Bluetooth Smart, LE and AVRCP 1.3. The new Bluetooth profiles will let the device communicate with wearables like smart watches and offer much improved battery life on either end when using the new profile. The updated AVRCP profile will allow for improved remote control functions.

Suffice to say that most of the improvements are under the hood. A few others worth mentioning are WiFi scan only mode that will help improve location information without having to connect to the network. You can now grant specific permissions to applications. Open GL ES 3.0 is also baked in which should mean that we’ll see better games come to the platform sooner rather than later.

Simply put, the screen on the new Nexus 7 is gorgeous. The LCD IPS panel with a resolution of 1920 x 1200 corresponds to a pixel density of 323 ppi. Text appears amazingly crisp and color accuracy is very good. We found the display to have excellent viewing angles and is bright enough to hold up quite well even outdoors. 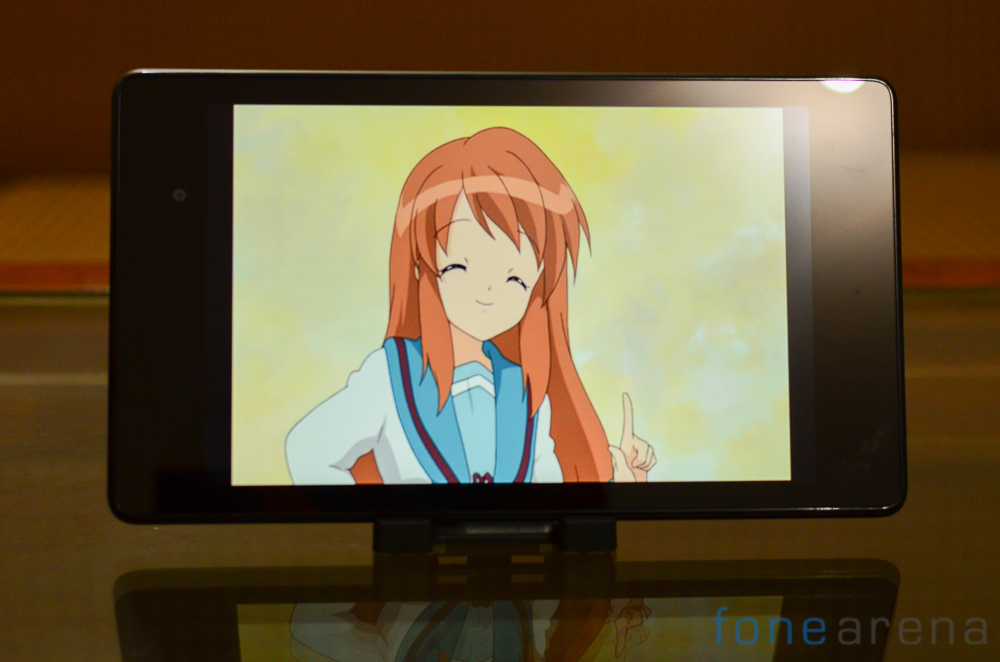 The display is definitely a good enough reason to upgrade from the previous version of the tablet. Given how Asus has managed to fit an excellent panel such as this in a $230 tablet means that the bar is set for the competition and we really shouldn’t accept anything lesser from the premium tablets.

As always, Google’s Nexus device don’t set the bar for top end performance and instead offers a device that is indicative of the median performance that should be expected from devices for the year. The Nexus program is after all aimed at developers first. That said, the silicon under the hood is a 1.5 Ghz quad core Snapdragon APQ8064 processor with an Adreno 320 GPU. The built in RAM is 2GB. Despite having a processor that is a generation behind the current leader ie the Snapdragon 600, we found performance to be absolutely brilliant. The tablet remained slick and smooth no matter what we threw at it. We’ve already covered the Nexus 7 benchmarks here but you can check out some of the more popular benchmark scores below. 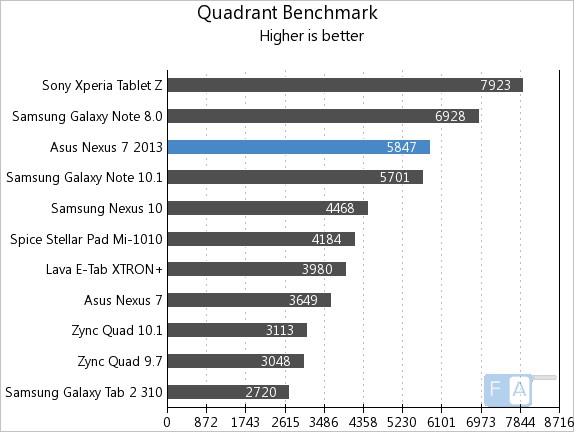 The new Nexus 7 scores over 5800 points and proves to be better than most devices in its category however the Galaxy Note 8.0 powered by Samsung’s homegrown Exynos chip proved to be faster. 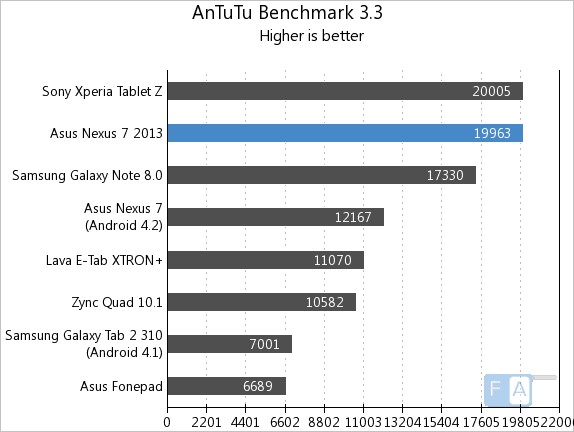 In AnTuTu 3.3, the tablet scores 19963 points which again is better than most of the competition. It is only the Xperia Tablet Z that beats the Nexus 7 and that too by a very small margin. We’ve maintained that benchmarks aren’t the only criteria while judging a device but the Nexus 7 manages to excel in both real word and benchmark performance. We did notice that the handset heated up a fair bit during gaming or processor intensive activities but never enough to be a concern.

The Full HD display on the Nexus 7 screams to be used for multimedia and gaming content. The tablet delivers on both fronts and we didn’t face any issues while playing back our standard multimedia test suite that comprises of a range of audio and video content across codecs and bitrates. 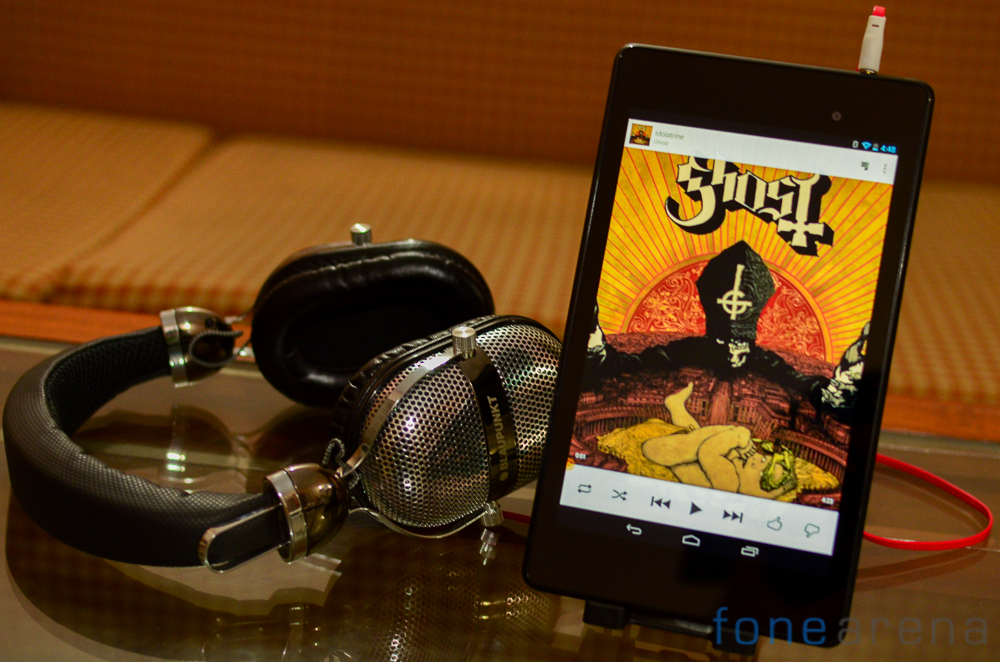 Google and Asus have improved audio playback through both the speakers as well as headphones. The use of a stereo set of speakers not only increases volume but also offers great stereo separation. The usual issue of lacking bass in audio from the speakers however still applies. Google has also partnered with Fraunhofer Labs, the society behind the mp3 codec, to implement HE-AAC multichannel surround sound for Google Play sourced movies. In our standard testing, the tablet could easily playback the standard audio codecs ie mp3, AAC and FLAC without any issue. 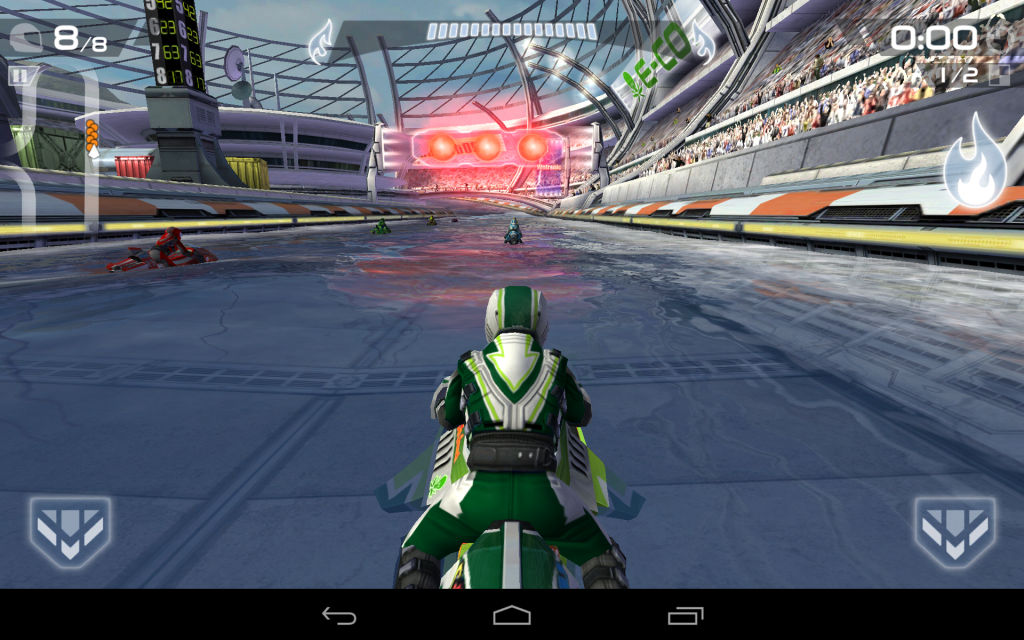 In terms of video playback, the tablet played back avi, mp4 and mkv files in up to 1080p high profile (10mbps) mode without breaking a sweat. Suffice it to say that the Nexus 7 will not disappoint if you are planning to use it for viewing multimedia content. We also tested out a range of games on the tablet and the Nexus 7 played them back flawlessly. Riptide in particular looks absolutely spectacular with gorgeous textures and an incredible level of details in the water, player models.

Also check out the gaming review

A tablet really isn’t your go to camera and shouldn’t be either but they do prove to be useful when you have nothing else on hand and for photographing documents or business cards. With that in mind, the camera on the Nexus 7 is a strictly mid range affair. 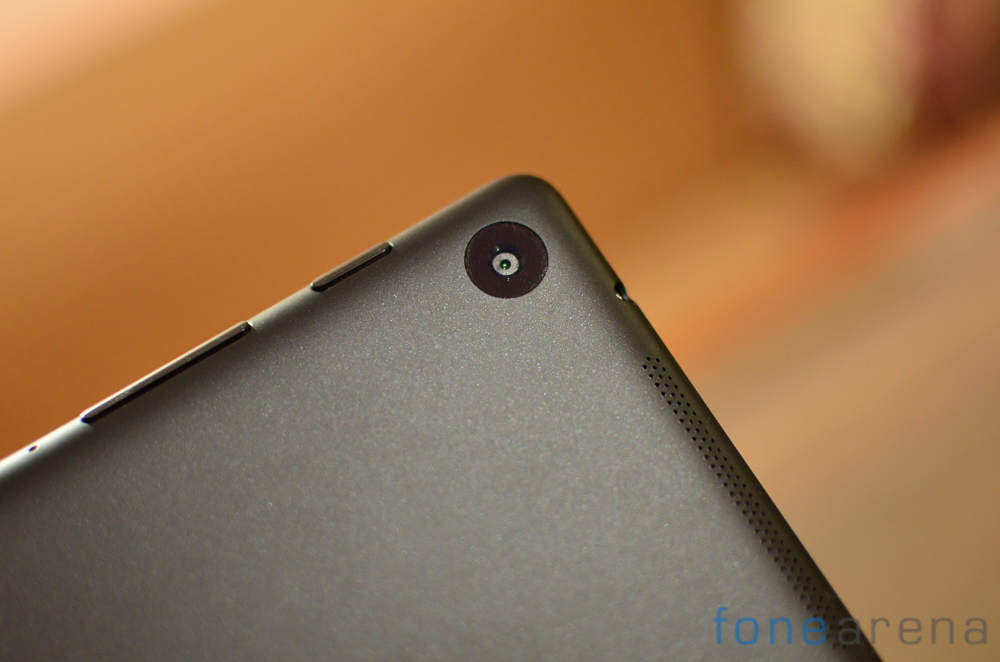 The unit at the rear of the tablet is a 5MP module but there is no LED flash. The Nexus 7 also has a front facing 1.2MP camera.

Android 4.3 brings with it a brand new camera application that has an enhanced interface. The interface has a three button layout with the shutter button placed in the center and flanked by a camera mode toggle, front & rear camera toggle on either side. The mode toggle allows you adjust exposure, white balance, scene modes, timer and picture size. The settings on offer are limited compared to the custom camera apps on competing devices but given the quality of the camera itself, we doubt you’ll miss them.

Coming to the camera itself, the 5MP unit will do the job if you’re strapped for equipment. Images are generally crisp and the camera is quick to get a focus lock with fast shot to shot times. Images tend to have a lot of noise in anything other than brightly lit conditions. The limited dynamic range and lack of HDR mode means that there are essentially no details captured in shadow regions. Contrast levels too are tuned down a bit and images appear natural if not slightly dull. The front camera is a 1.2MP unit that’ll get the job done and little else. It works well enough to facilitate Skype or Google+ based video chats though you’ll have to pony up for the wireless enabled version of the Nexus 7 if you want to do that outside of WiFi hotspot zones.

The rear camera is also capable of capturing Full HD video and does a good job at retaining a focus lock. Video is recorded at 30FPS. That said, the quality is fairly poor with the amount of details captured quite low. Audio capture is decent and the tablet is able to cut out background noise. The above embedded video should give you a good idea of what to expect from the Nexus 7 in terms of video capture.

The battery capacity has gone down from 4,325mAh to 3,950mAh and this does have an impact on usage times. Compared to the competition and for that matter even the model it replaces, the new Nexus simply doesn’t last as long. In our video run down test we got a little over 7 hours of usage time while the previous model managed to last well over 9 hours. This can probably be owed to the high resolution screen, smaller battery pack which is definitely something that Google should have considered.

Despite being a bit more expensive than the previous generation, the new Nexus 7 retains its crown of being the best Android tablet out there. It offers amazing value for money and packs one of the best tablet display out there. 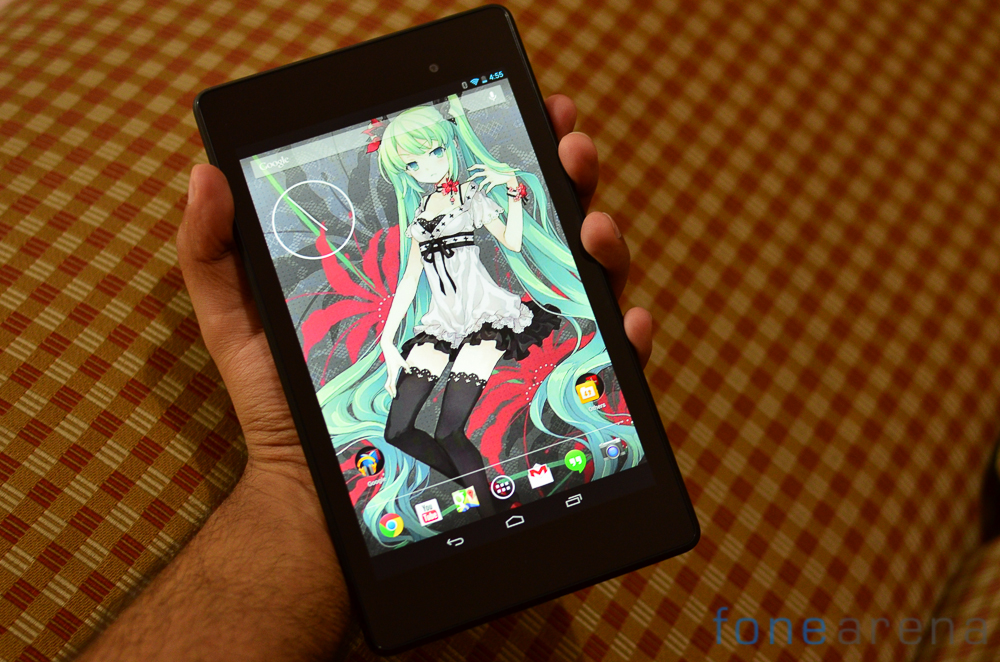 In terms of performance, it might not be the fastest but it is far from a slouch. Our only concern was with the lower capacity battery pack that results in about 20% lesser usage time. The camera unit too isn’t particularly good either. However, minor concerns apart, the Nexus 7 is a stellar package that is most certainly the top Android tablet out there right now.