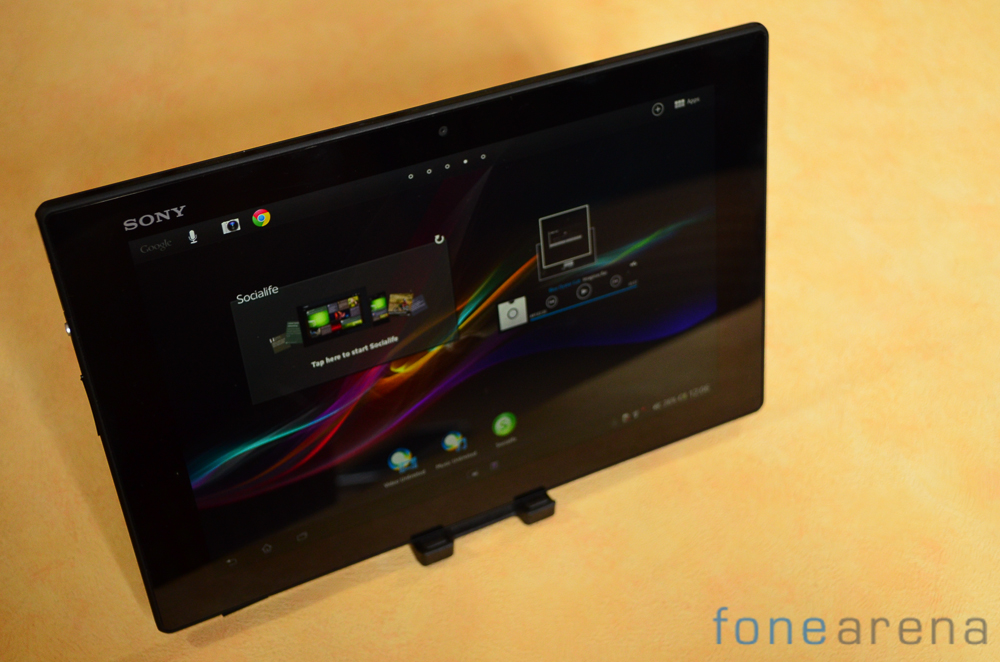 Android tablets are a dime and a dozen with few if any differentiating factors. In this exceedingly crowded space, Sony enters with a high end proposition that aims at taking the iPad head on. With very appealing design aesthetics and a lot of features packed under the hood, the Xperia Tablet Z offers a lot of bang for the buck but is this enough to tempt the consumer ? Read on to find out.

Sony is no stranger to stunning design as has been seen in the past with the likes of the Xperia S and the multitudes of gorgeous looking hardware it has outed. Having consolidated all its divisions, the Xperia Z Tablet is a culmination of efforts from all the divisions at Sony. A black slab at first glance, the focus on craftsmanship is very evident. 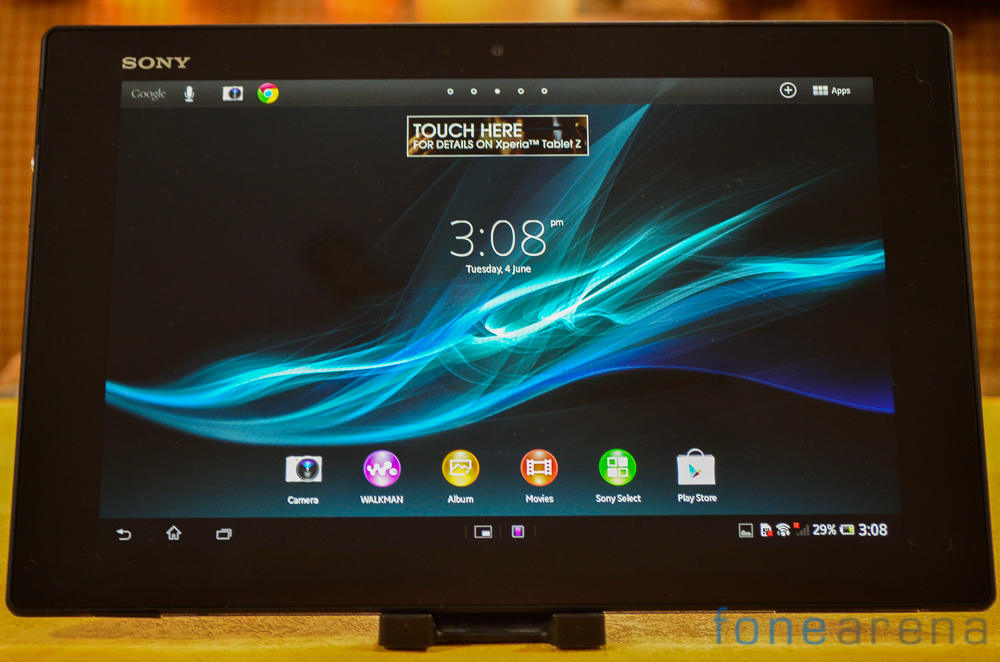 The front of the Xperia Z Tablet has a piano black finish that reeks of the design language used in Sony’s Bravia display range. When switched off, the screen fades away into the black bezel and appears as one solid piece. A front facing camera can be seen hidden away at the top of the display. 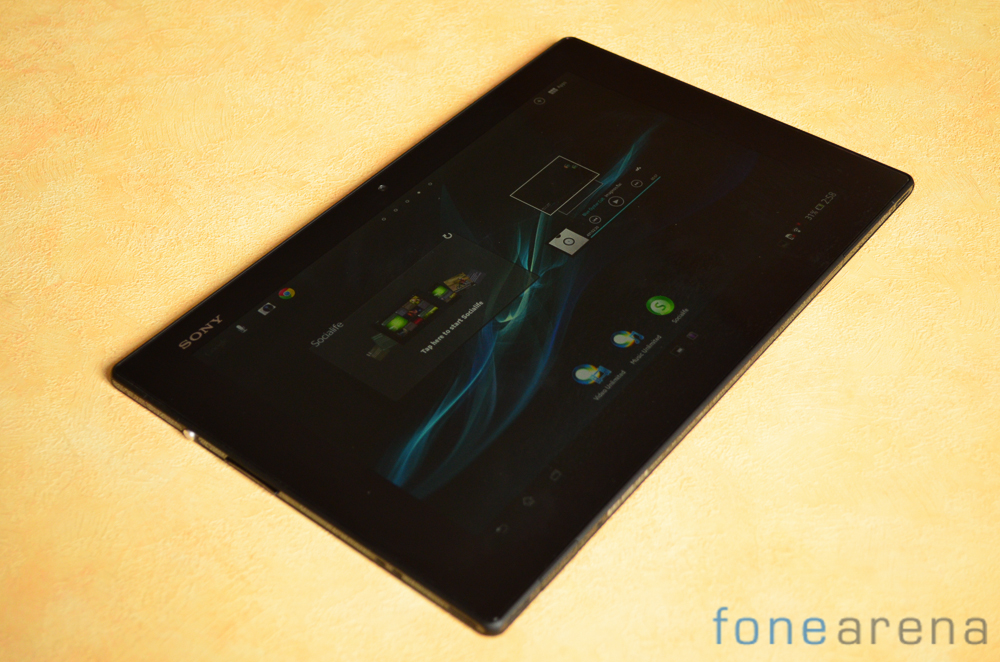 The Xperia Tablet Z clocks in at a svelte 6.9mm shell and weighs just 495 gram which make this the slimmest 10 inch tablet out there and possibly also the lightest. While we could nitpick about the relatively sharp edges of the tablet, it really is a non issue in day to day usage. 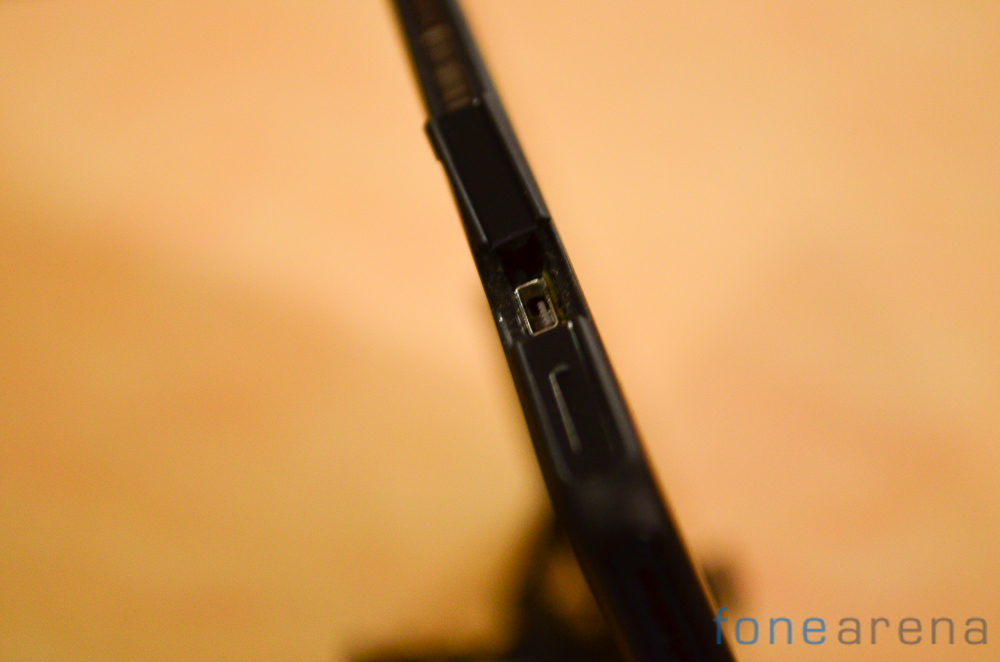 Where the real problem lies is in the port covers located on the sides of the tablet under which hide the micro USB, 3.5mm, HDMI, micro SD and SIM card slots. These covers tend to be very hard to open and can lead to a lot of frustration. Ideally we’d have liked an openly accessible port for the audio jack but the water resistant nature of the tablet necessitates enclosing this under a cover. 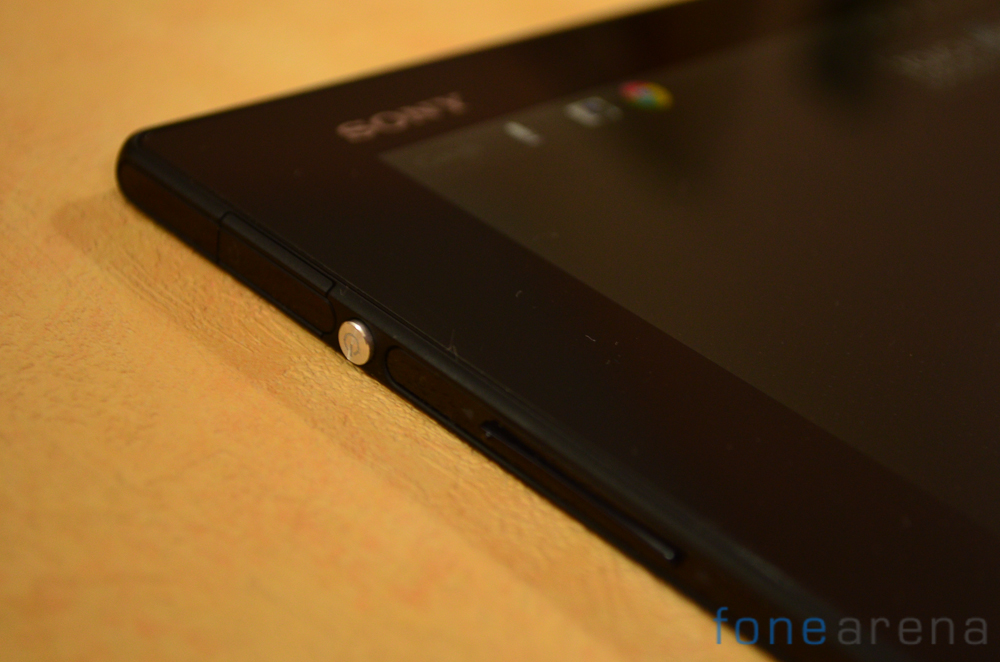 The power button is clicky and rather solid but the same can’t be said for the volume rockers that feel loose and require more than a gentle push to activate. 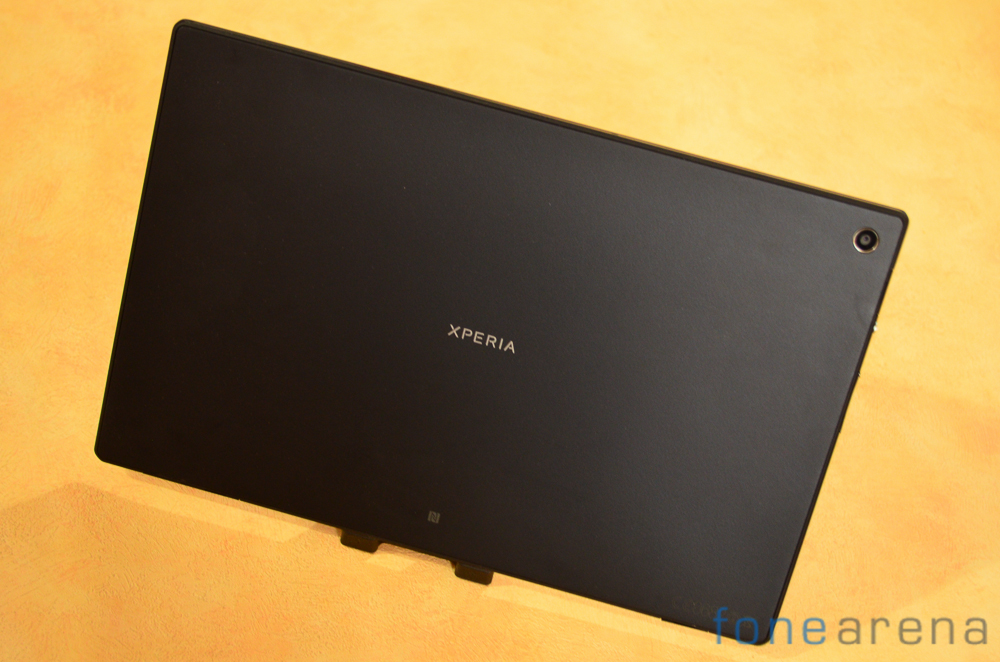 Moving over to the back of the tablet we get our first feel for the soft touch plastic which feels rather nice. The material used at the back also makes it a bit easier to grip and makes it less prone to slipping. Unfortunately this material is also exceedingly fingerprint prone. You’ll want to make use of the water resistant nature of the tablet to wash off the scuff marks from the back. Overall , Sony’s new tablet is quite a stunning piece of kit that has a design worthy of praise albeit with a few let downs. The tablet conforms to the IP55 and IP57 ratings that make it both dust and water resistant. The tablet will survive the occasional splash and even when submerged under 1meter of water up to 30 minutes however this doesn’t mean that you’ll be able to use it underwater.

For a company that has a history of making some of the best displays in the market, Sony has historically had less than stellar displays on their smartphones and tablets. Is the panel on the Xperia Z Tablet any better ? Yes and No. 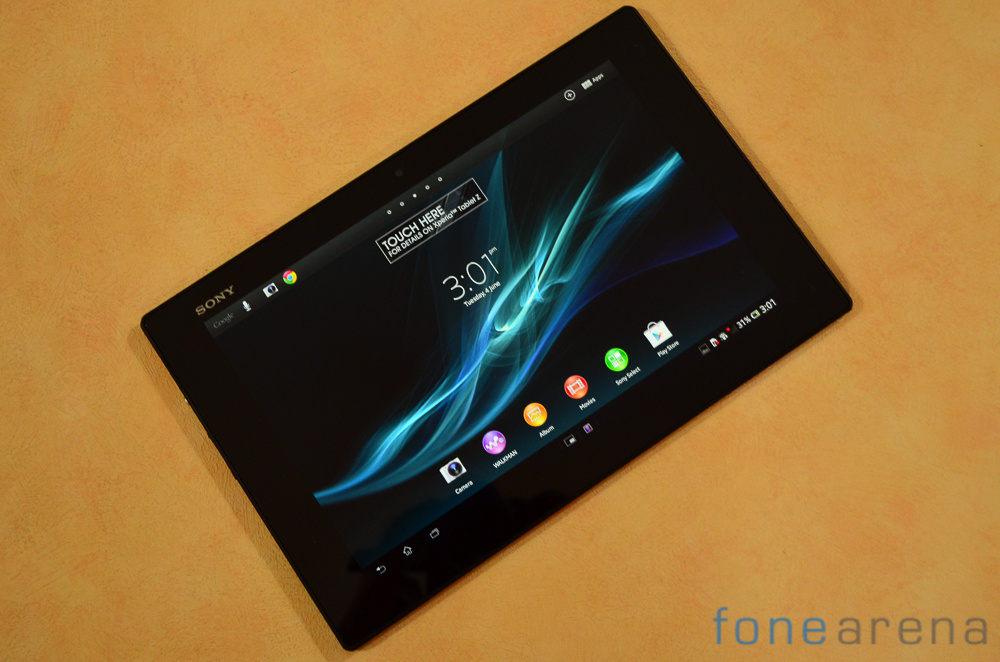 While Sony has greatly improved the screen compared to its previous efforts, it still falls short of the competition. Black levels on the 10.1 inch display aren’t the best and viewing angles too are fairly limited. The one thing you won’t complain about however is the resolution of the screen. The 1900×1200 LED backlit LCD has a pixel density of 224ppi which is more than enough to satisfy all but the most ardent of pixel peepers.

The software onboard the Xperia Z is typical Sony fare with some tablet centric enhancements. Running Android 4.1.2 , the tablet is expected to get an update to 4.2 sometime in the future. Sony has added a tray to the top of the display that houses some of your oft used applications. Handy to have but probably not the most convenient of locations to have such a bar because of having to stretch across the display to access these apps. If you’ve used any Sony Xperia device in the past you’ll be right at home with the Tablet Z that uses the same app drawer and a stock settings pane. You’ll find Sony’s usual battery related settings here and they work as expected. 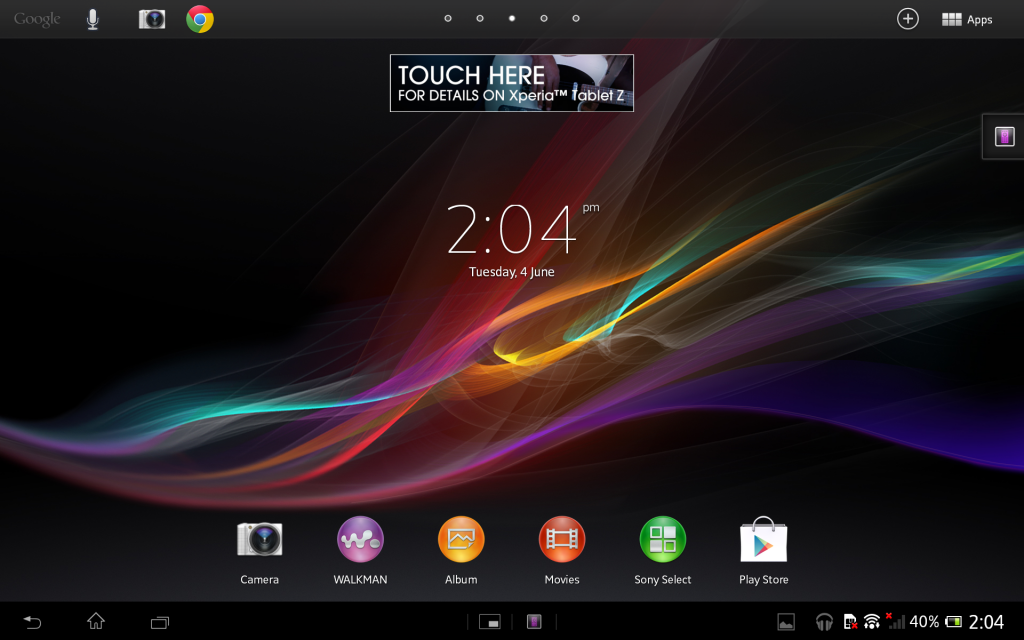 Sony’s suite of applications from its smartphones have been ported to the tablet as well and work more or less the same as you’d expect. We’re fans of the Gallery, Movie and Music apps that are bundled with Xperia phones and were hence happy to see them here. As with all things Android, it is possible to replace and set as default any other application that you might prefer. 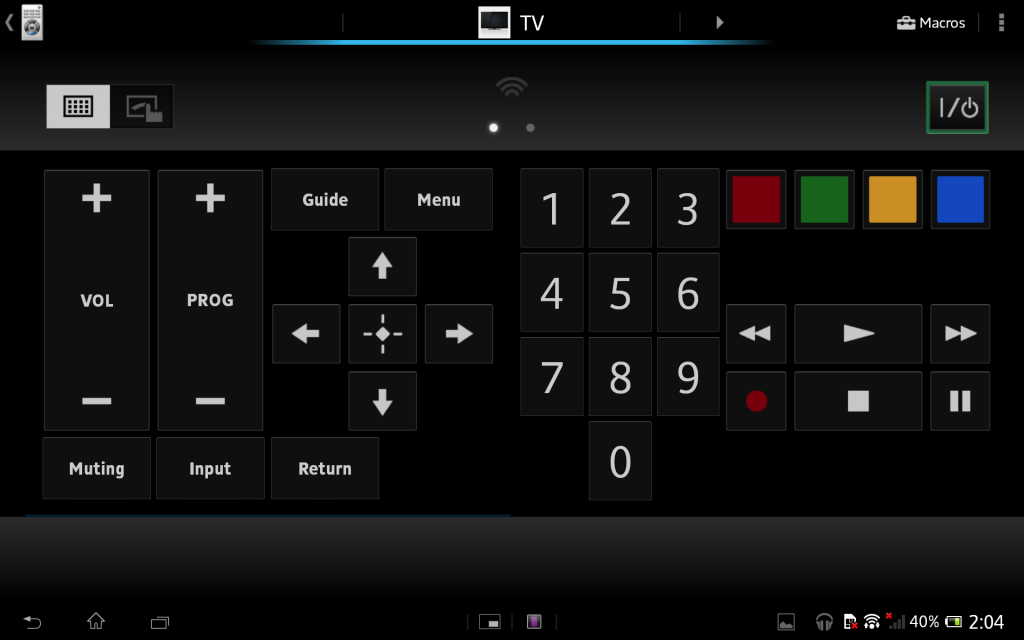 To make use of the IR Port at the top, Sony has bundled in a fairly robust universal remote application which comes preprogrammed with several thousand codes. We were able to program the application to work with our television and Tata Sky STB as well so it is highly likely that you’ll be able to make full use of this functionality. The remote application also comes with a floating widget that can stay on top of other apps and is resizable. A few other floating widgets like Notepad and Calculator are also bundled in. The usual suspects like PlayStation Mobile, PlayNow in addition to others also find their way on the tablet but most users won’t be getting much utility out of these applications. 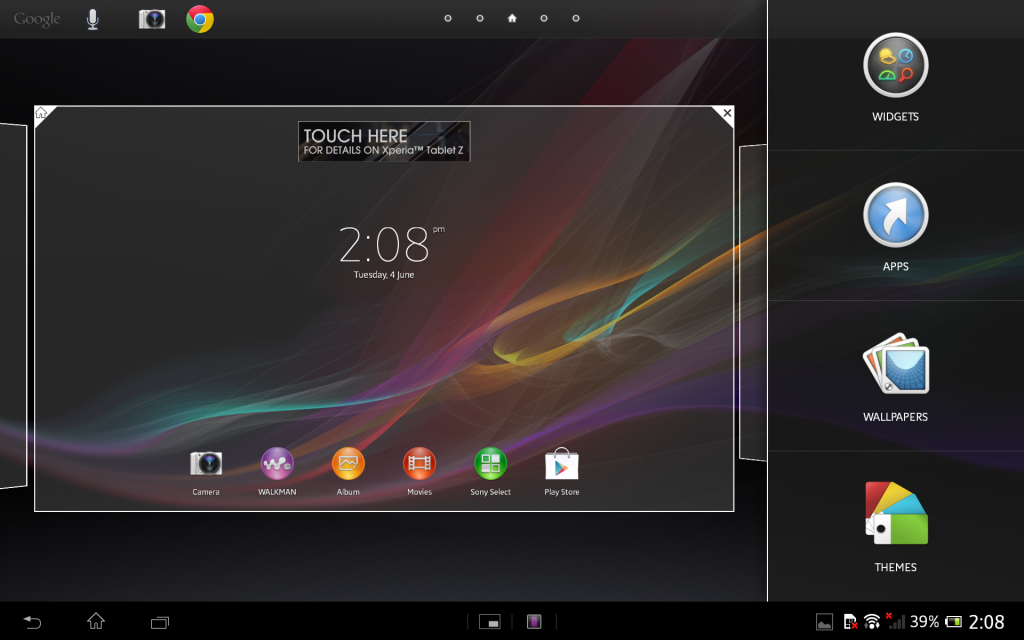 Some of the changes made by Sony are quite curious and of questionable utility. Case in point being the wallpaper and widget picker on the homescreen.

Under the hood is a 1.5Ghz Qualcomm Snapdragon processor clocked at 1.5Ghz. Paired with 2GB of RAM, it provides a lot of muscle but is it enough to keep things flowing smoothly ? Sort of. The tablet is capable of crunching through pretty much anything you throw at it but it is possible to spot a hint of lag. This persists throughout the application interface as well which is something we found a bit disconcerting. 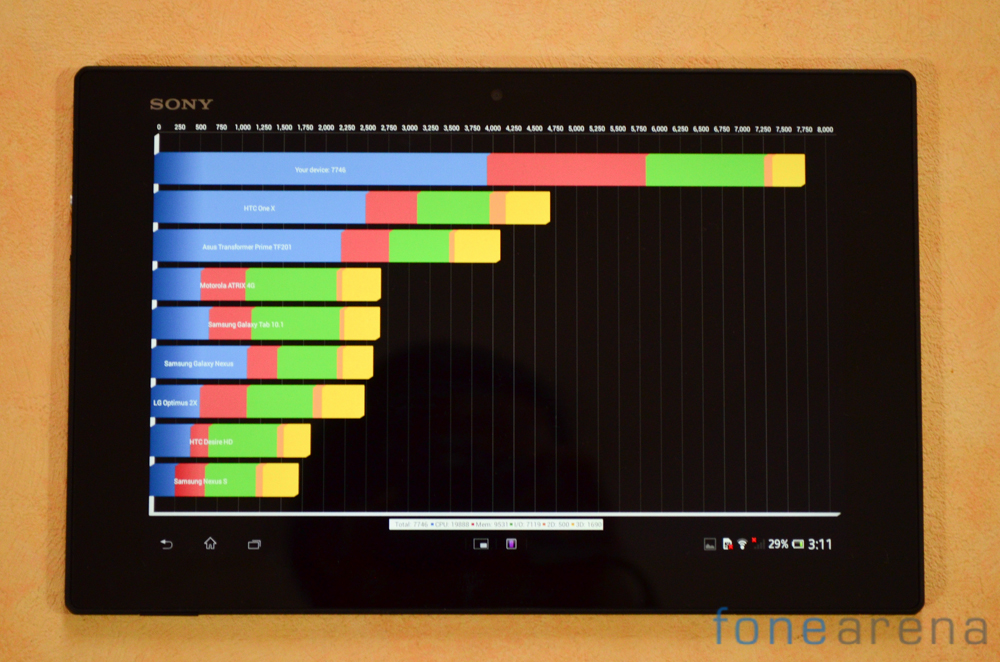 If benchmarks are your thing then we’ve got you covered here. As you can see below,  the Sony Xperia Tablet Z is at the top of the list in almost all categories and manages to score a very respectable 20,005 in the Antutu Benchmark. 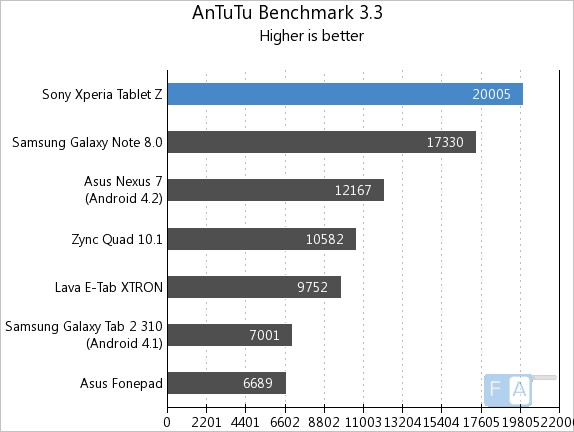 Meanwhile, the Vellamo 2 HTML5 browser benchmark scores are 2050 which is ahead of popular competitors like the Galaxy Note 8.0. However as real life experience demonstrates, benchmarks scores aren’t always indicative of actual performance. 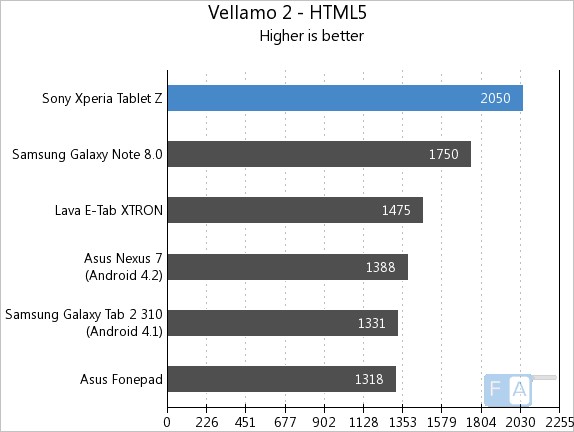 Overall performance on the tablet is good but not the best which isn’t something we expect from such a high end device. Browsing in particular results in significant checker boarding which left us disappointed.

The Xperia Tablet Z is equipped with a rear facing 8MP camera and a front facing 2MP snapper. Unfortunately, image quality isn’t very good from either module. Sony has used the same module as that on the Xperia Z and our impressions from the Xperia Z smartphone’s camera carry over to the Tablet as well. 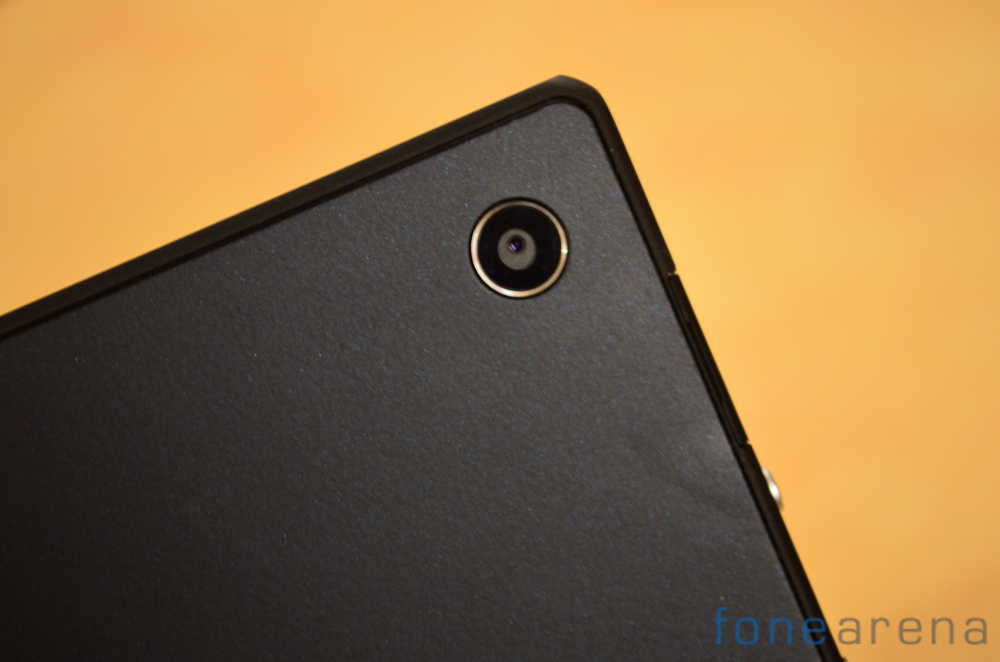 Outdoor shots tend to be usable but a bit washed out. In adequate light the tablet is able to focus very quickly. However as soon as we enter less than ideal lighting conditions, the image quality goes for a toss. 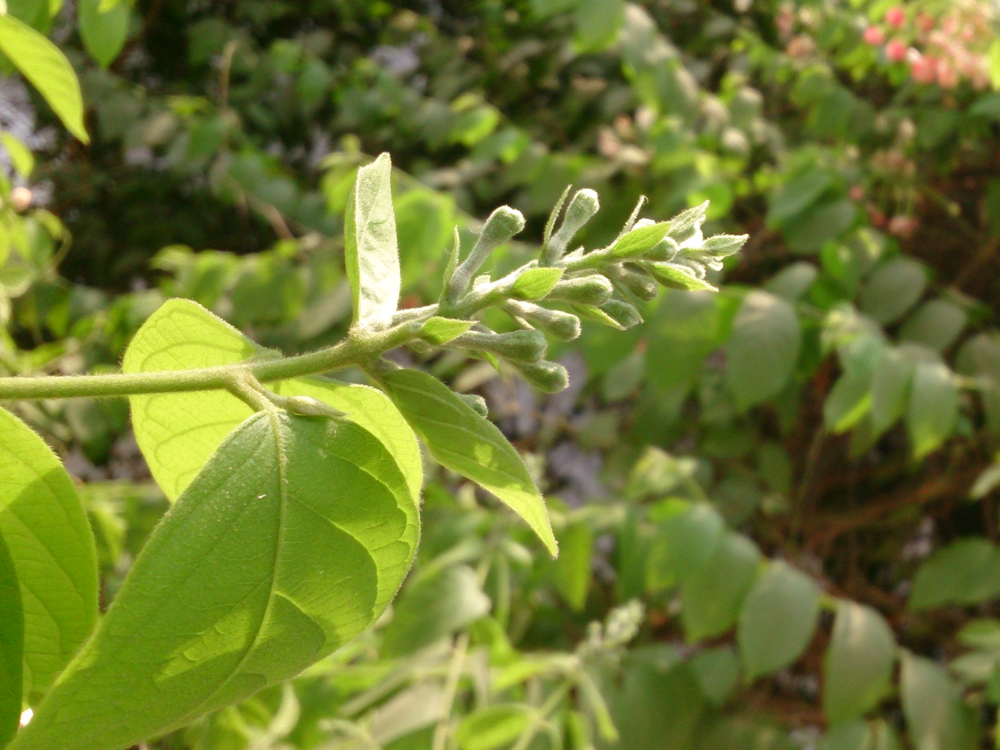 Indoor shots are incredibly noisy with blurry and grainy shots being the norm rather than a rare occurrence. 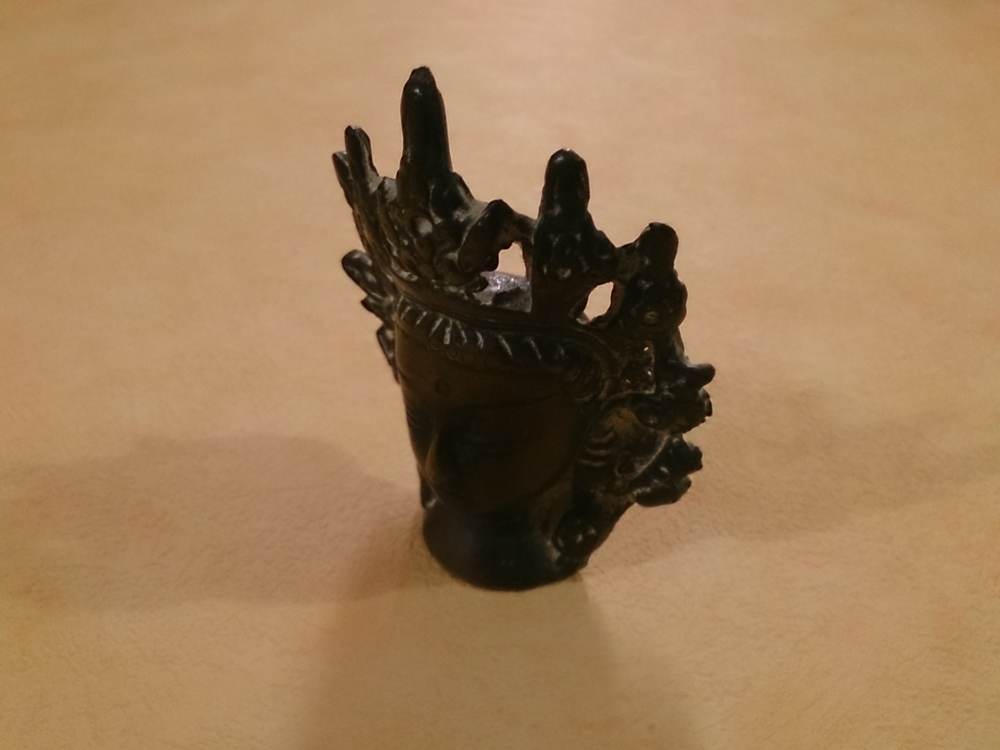 We can’t really recommend shooting your vacations with the Xperia Tablet Z and for what its worth, you really shouldn’t be using a tablet to shoot important moments anyways!

As mentioned earlier, the tablet has a microSD card slot for storage expansion hidden away under a waterproof port cover. A standard micro USB charging and connectivity port is located on the left edge of the tablet. In addition, you can also find a SIM card slot that facilitates mobile data connectivity. A microphone and IR blaster at the top round off the connectivity options on the tablet. Equipped with a 6,000 mAh battery pack, the Xperia Z Tablet provides about 6 hours of autonomy under fairly aggressive usage. Used sporadically, it is definitely possible to get 2-3 days of usage time.

The IP55 and IP57 ratings for the Xperia Tablet Z place it in a unique position and make it the only tablet out there that can be used even when you’re in the shower or stuck in a dust storm. 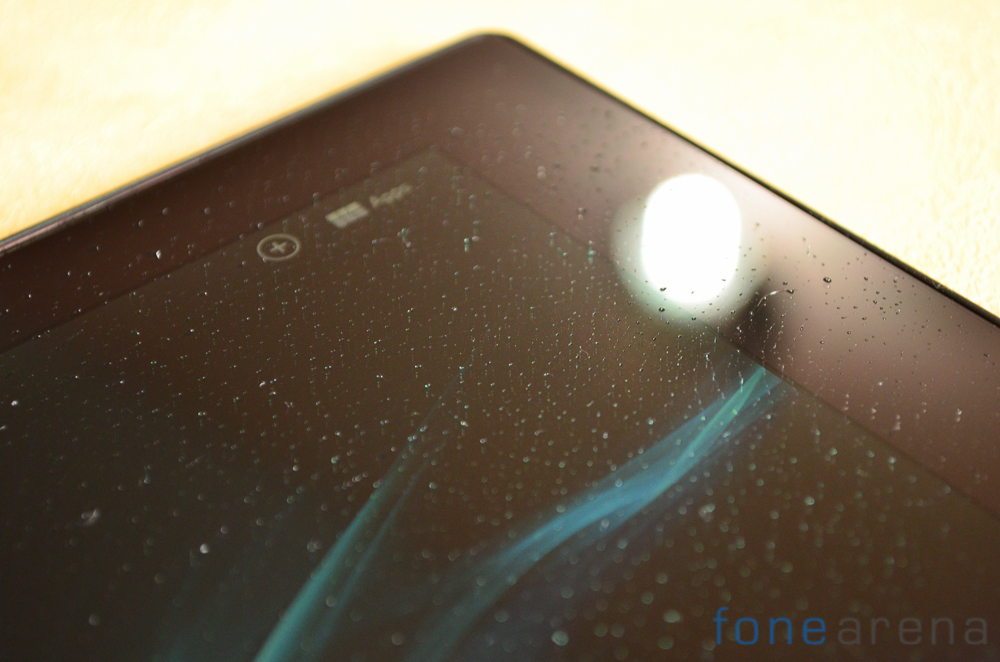 Additionally, the tablet is one of the first Sony devices to offer direct connectivity with the Dual Shock 3.  This means that you’ll be able to load up your favorite games and emulators and play them using a proper hardware controller instead of relying on touch only controls.

With the Xperia Tablet Z, Sony has brought together their finest designers and engineers to create a beautiful product and to combine it with their software enhancements. While it has worked for the most part, we feel certain areas could definitely do with a bit more polish. 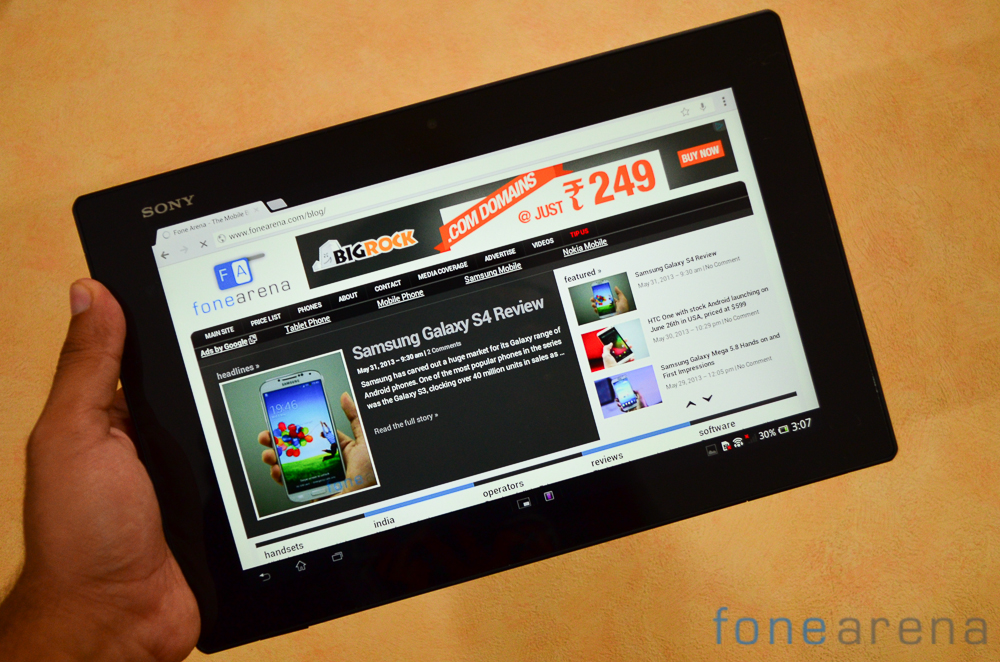 Rough edges around the software are evident and the use of latest generation chipsets like the Snapdragon 600 might’ve helped alleviate the occasional lags spotted in the interface. The camera too wasn’t particularly impressive. Over all we feel that Sony might be over reaching by pricing the Xperia Tablet Z at Rs. 46,990 and you might be better served by other alternatives.