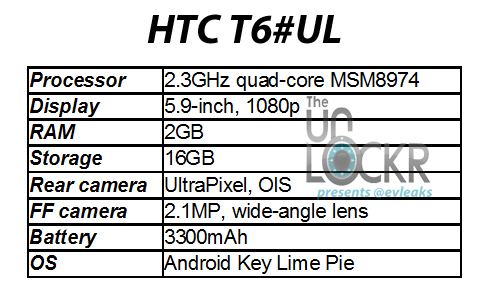 HTC T6, the company’s first phablet surfaced earlier this week. We did not hear anything about the specifications at the time. Thanks to @evleaks, now we have the specifications of the device even though these is no image of the device. According to the report by The Unlockr the phone is expected to come with a 5.9-inch (1920 x 1080 pixels) full HD display, powered by a 2.3GHz quad-core Qualcomm Snapdragon 800 processor. It would run on the yet to be announced Android Key Lime Pie with enhanced HTC Sense UI with new BlinkFeed with more content, better customization and offline support. It is expected to come with a UltraPixel rear camera with LED Flash, OIS, BoomSound speakers and Beats audio support support  similar to the HTC One.

It would come with a sensor on the back of the phone that unlocks the phone when you grip it. It would also come with a power jacket accessory that is a protective-case with a 1250mAh backup-battery pack. The report says that the HTC T6 phablet is expected launch in late summer or early fall. The HTC M4, a mini version of the HTC One is also expected to be announced soon.