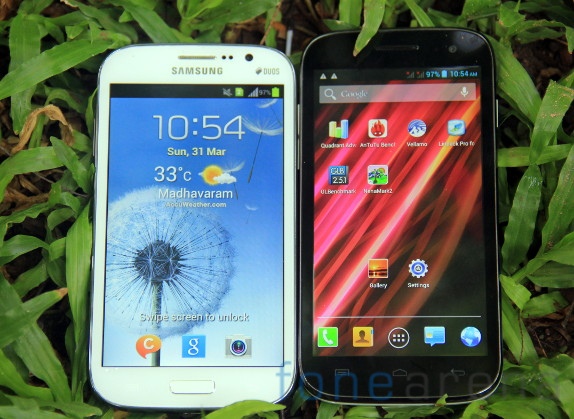 Wait, have you read our reviews of the Micromax A116 Canvas HD and the Samsung Galaxy Grand Duos yet?

The Micromax A116 Canvas HD is, in every word, the Indian company’s flagship device, but retailing at nothing like a flagship price. This is a mid range device that is aimed at providing the best bang for your buck, and that’s what Micromax has achieved with this device.

The Galaxy Grand Duos on the other hand, we feel, is to give consumers an option of a cheaper Galaxy Note. With a similarly huge screen, Samsung can create the halo effect on this device with similar design, and tempt reluctant Note buyers to go for this instead, and that seems to be working in their way as far as we know.

Before we jump to the in-depth comparison, lets take a look at the general similarities in both the phones –

And now for the comparison. The design of both these phones are freakishly similar. Both have rounded corners and feel similar on the front except for the colour. The A116 is dual coloured with a black front and a white back. Speaking of the back, both phones are different looking here. While the Galaxy grand duos looks like the Note, with its flat sides, the A116 looks more like the Galaxy S3 with side curved inward towards the front.

Coming to the build quality of these phones, they both are made of plastic, but we found the Galaxy Grand Duos to be better. With a textured pattern on the glossy back, it looks and feels better than the cheap glossy back on the canvas HD. Not only that the Canvas HD’s screen is a finger print magnet, thereby decreasing the appeal of the device in terms of build. But then, the ergonomics matter too right?

With 10.7mm of thickness and 156g of weight, the Micromax A116 is slightly easier to hold than the 9.6mm 162g Galaxy Grand mainly due to the curved sides of the phone. Makes for easier holding in the hand, and feels less heavy too. While the Galaxy Grand is not too heavy or too unwieldy in the hands, it’s definitely not easier than the A116 in comparison, and can be noticed only when you hold both devices and try them. Not a problem otherwise. 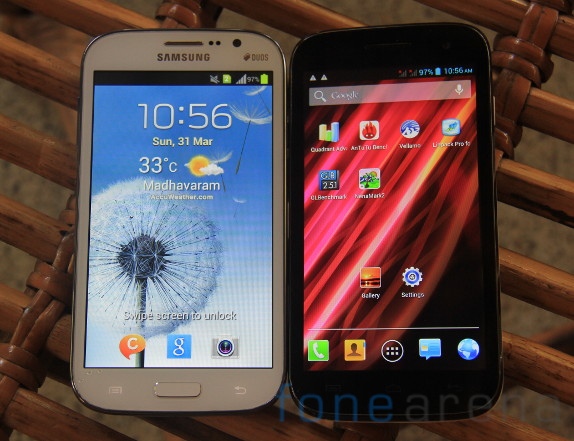 Now lets talk about the display. The Canvas HD has a 16:9 1280×720 IPS screen at 5 inches while the Galaxy Grand has a similar 5 inches SLCD screen but at WVGA 15:10 800×480 resolution. So, when you compare the pixel density between the two devices, it comes at 294 PPI on the Canvas vs 186 PPI on the Grand. Appalling, really. When you take a decently close look at the Grand Duos’ screen, you can easily see the individual pixels. Even thought it is of the RGB type, the display still loses out.

The viewing angles, colour reproduction, and overall performance we find, is better on the Canvas HD than the Galaxy Grand Duos. However, we still felt that the colours are more saturated on the Grand Duos which might be a good or a bad thing. But we will definitely give it to the Canvas HD in this department, the display is way better in all aspects. 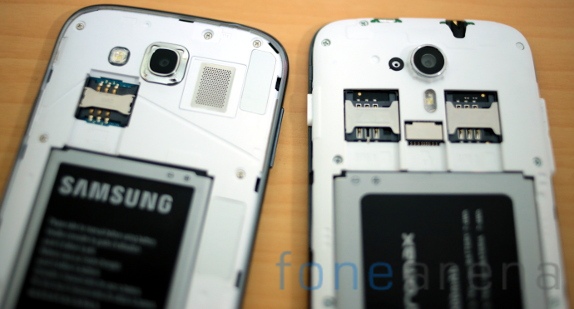 The internals of both these devices are vastly different. The Micromax A116 has a MediaTek quad core SoC, the MT6589, with PowerVR SGX544MP2 being the GPU. The processor is based on the ARM Cortex A7 architecture with four cores running at 1.2 GHz. The Galaxy Grand Duos on the other hand has the Broadcom BCM28155 SoC with a ARM Cortex A9 based 1.2 GHz dual core processor and Videocore 4 GPU. Based on our benchmarks results, it’s evident that the raw performance of the A116 is better but when it comes to gaming we found that the Grand Duos is slightly better, in some games. Not really a worry to be honest, but we did find some games laggy on the A116, while all performed great on the Grand, might be due to the less demanding resolution.

Both the phones have 1GB of RAM, so there’s nothing to worry in that department. The internal storage of A116 is rated at 4GB while the Grand is supposed to have 8GB of internal storage, but in actual real life terms, you get 1.77 GB on A116 and 3.94GB on Grand, which is preposterous. 1.77 GB is measly amounts of storage if you are planning to install more than two huge games like GTA or ShadowGun which run perfectly fine on the A116. There are countless Gameloft games that are bigger than 1GB, and the inability to install them on the SD card leaves much to be desired. While this is slightly better on Grand, we still felt cramped in internal storage. 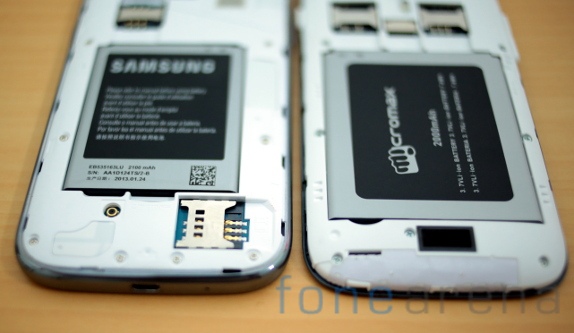 Dual SIM is one feature that these phones do well these days, and the A116 and the Grand Duos are no exception. However, it is important to note that the Grand Duos comes with Samsung’s own Smart Dual SIM feature which lets you take calls from the SIM2 while on the SIM1, thanks to call forwarding techniques. The dialer and SMS apps on both support quick switching and using two SIMs at the same time.

Coming to the cameras, both sport 8MP rear facing cameras and 2MP front facing cameras. In our tests, we found the Galaxy Grand having much better overall performance than the canvas HD, which just has a poorer camera no doubt. Both can record full HD 1080p videos, however we found the audio on the Grand to be a bit distorted on our unit, but the video quality is definitely better on the Grand. The front facing cameras are capable of VGA videos on both, and they are not good quality either, just passable. Here are some camera samples from the Canvas HD(the first row) and the Galaxy Grand(second row) in full resolution.

Finally, we come to Software. Running on Android 4.1.2 Jellybean, both these devices sport the smoothness of Project Butter and the Google Now awesomeness, but there is a stark difference in the UI because the Grand is completely skinned with TouchWiz. The A116 is almost stock with only the core apps messed with, in favour of Dual SIM support and a few other tweaks. Touchwiz on the other hand is almost the same as the one on the Galaxy S3 and Note 2, bringing feature parity to the Grand. 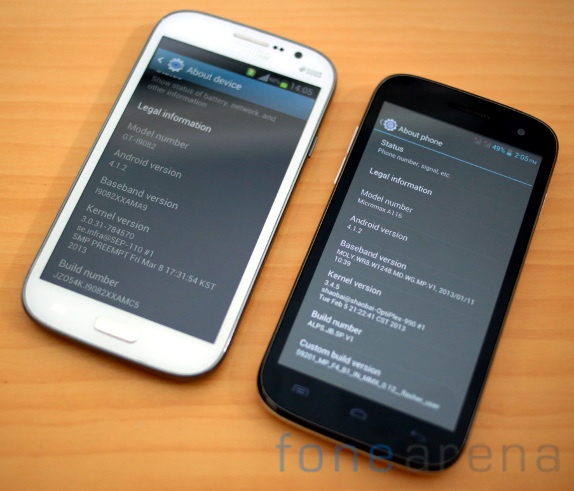 We definitely like TouchWiz more than stock, ugliness aside. Mainly due to the dearth of useful features it offers, like Multiscreen, Pop up play, useful shortcuts and behaviour on the notifications drawer, and other gimmicky features that some of you might use, like Smart Stay, Motion etc. So, yeah Touchwiz is well seasoned and is feature rich, but it is still ugly, especially the messaging and some other core apps, in our opinion.

So, after we have gone through most differences between these two devices, it’s time for you to tell us your preference. Do let us know in the comments section below.