Third quarter of the year is usually really bad for mobile phone manufacturers as there are no huge celebrations where people buy devices and it is also the time where new devices are unveiled which will be launched during Christmas. So people tend to wait for Christmas time where all the mobile manufacturers try to bring in their best devices. Gartner’s research shows that mobile phone sales has gone down 3% compared to last year but in the same research smaprtphone sales has gone up 47%. 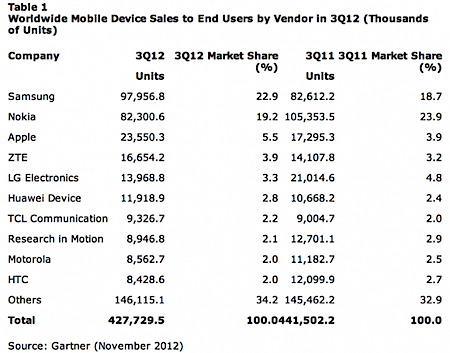 427 million phones were sold in the third quarter which is slightly more than the 419 million devices sold in the second quarter. While when we look only at smartphones, the sales have gone up and by the look of it are not going to come down pretty soon thanks to Android. 169 million Smartphones were shipped this year.

Samsung leads the pack of manufacturers having most number of mobile devices sold while Nokia and Apple come in 2nd and 3rd respectively. It was really bad to see HTC go down 30%, hoping that their upcoming devices do well in the market. Even Blackberry saw a 30% fall while ZTE, LG and Huawei saw a rise in their sales. 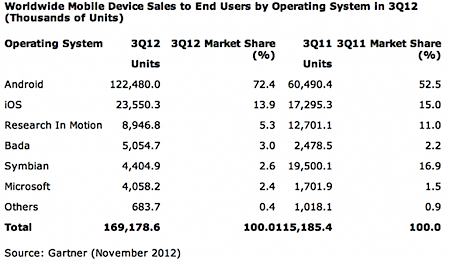 When it comes to Operating System, there is no doubt, Android stands firm on top while iOS and RIM’s OS stand 2nd and third. Microsoft can see a ray of light as they see their platform penetration rise from 1.5% to 2.2%. I am sure the emerging markets are seeing the potential of Smartphones which has directed in the low sales of features phones.