If the Galaxy Note is anything to go by, Sales of super-sized phones are not going to slow down any time soon. Not wanting to miss out on the trend, LG recently launched the Optimus Vu. Its take on the phablet form-factor includes a 5″ screen in a fairly uncommon 4:3 aspect ratio. 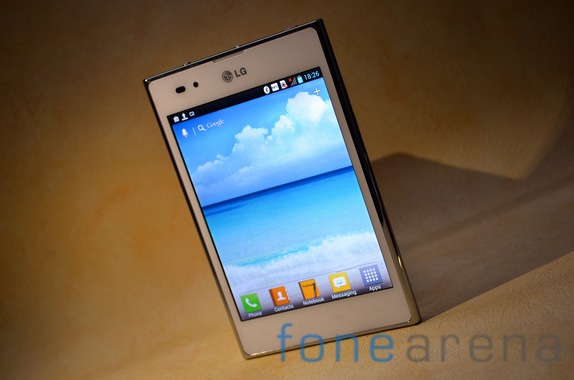 Powered by a quad core Tegra 3 processor coupled with 1GB  RAM and 32GB of storage, the LG Optimus Vu does not skimp on specifications but is that enough to deliver a compelling smartphone experience ? Read on to find out. In Box Contents

While retail packages for smartphones keep getting smaller, LG has put in a lot of though on packaging and it shows. The box is color coordinated with the color of the handset. Our white Optimus Vu was delivered in a white box with a red inner lining. 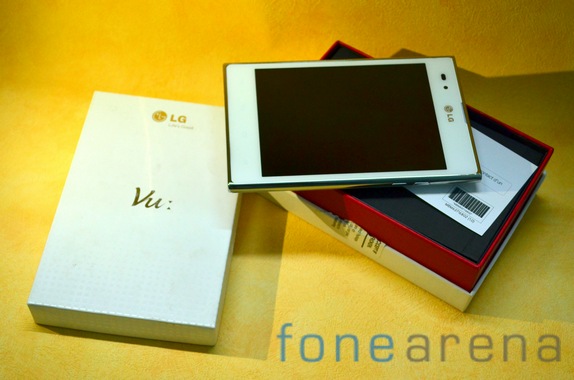 The contents of the package do not disappoint and include a USB charger, cable , earbuds, stylus and even an NFC tag to make use of the integrated NFC capabilities of the handset.

For such a large handset, the Optimus Vu is surprisingly light. The smartphone weighs just 168grams and has a svelte 8.55mm thick profile. The handset feels dense in the hand and has quite a premium feel to it partly because of the textured back. 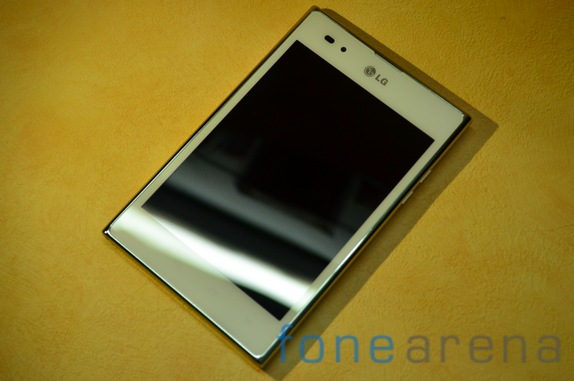 The front of the handset is dominated by the screen. You can find a front facing camera and ambient light sensor above the screen. Four capacitive buttons are located below the display. 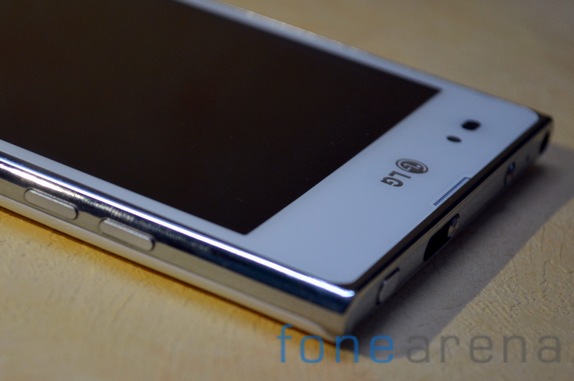 The right side of the handset is clean for the most part with just two volume keys to increase or decrease the volume. There is no dedicated camera key on this handset though the volume keys perform the same task in the camera app making up for it. 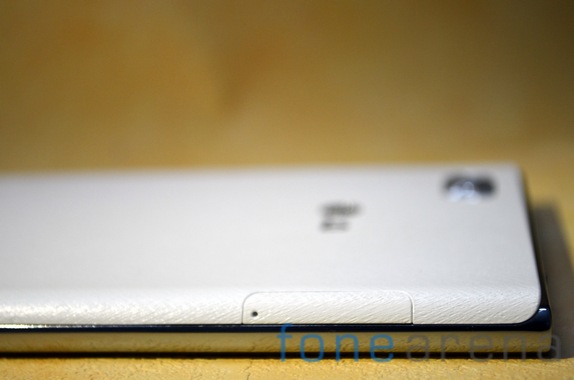 The left side has no buttons but features the SIM card slot. As with several other handsets these days, you will need a pin to prise open the slot. There is no microSD card slot but the handset does have 32GB of onboard storage which should be enough for most users. 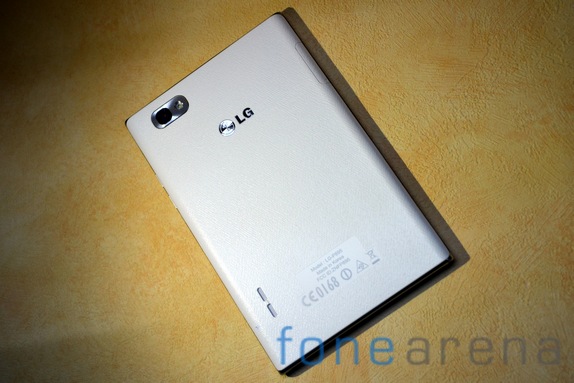 The back is mostly clean with an LG logo placed below the camera module which is finished in brushed aluminum. A small speaker grille is located towards the bottom of the device. Device specific information like the FCC ID are printed here as well. 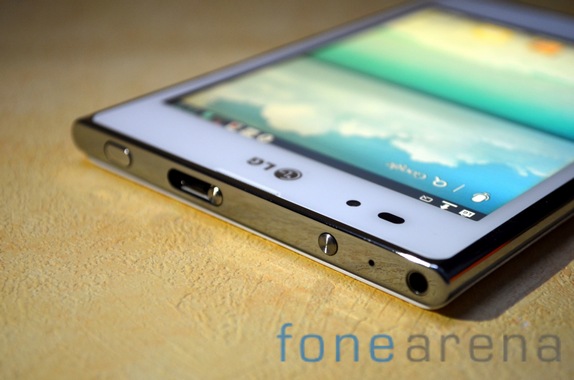 The top of the Optimus Vu is particularly busy with a range of buttons and sliders. As pictured above, you can find the 3.5mm headphone jack on the right, next to it is the dedicated button to activate the note taking application. A slider covers the microUSB slot to prevent any dust accumulation. Left most is the power key. The buttons have good tactile feedback and are easy to press.

The screen on the LG Optimus Vu is a 5 inch HD-IPS panel with a resolution of 1024 x 768 pixels. The aspect ratio of the screen is 4:3 which while unique doesn’t really improve the experience in any way. In fact we’d have loved to see this excellent panel in a 16:9 configuration resulting in a more comfortable to hold handset as well. 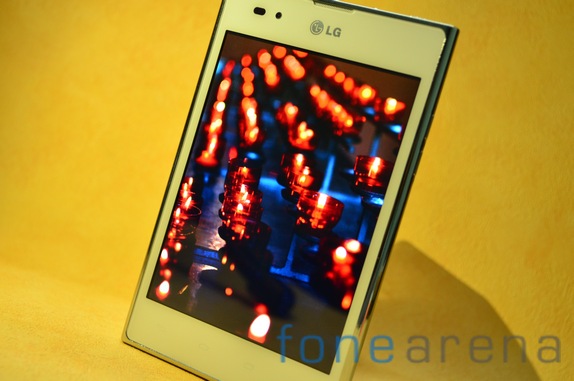 Saturation levels on the IPS display are near perfect and the viewing are great. The screen makes for a great web browsing and photo viewing experience. Sunlight visibility is quite good as well.

The Optimus Vu comes bundled with NFC tags which can be programmed using the integrated LG Tag+ application. A few defaults are already included in the application set for Office, Home and Car Use. 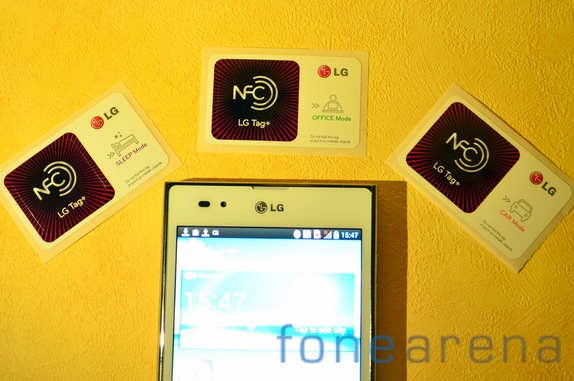 We really appreciate that LG has bundled in tags in the box so that users may try out for themselves the NFC capabilities of the handset. A simple tap on the tag will result in automatically changing a range of settings on the phone according to your preferences. 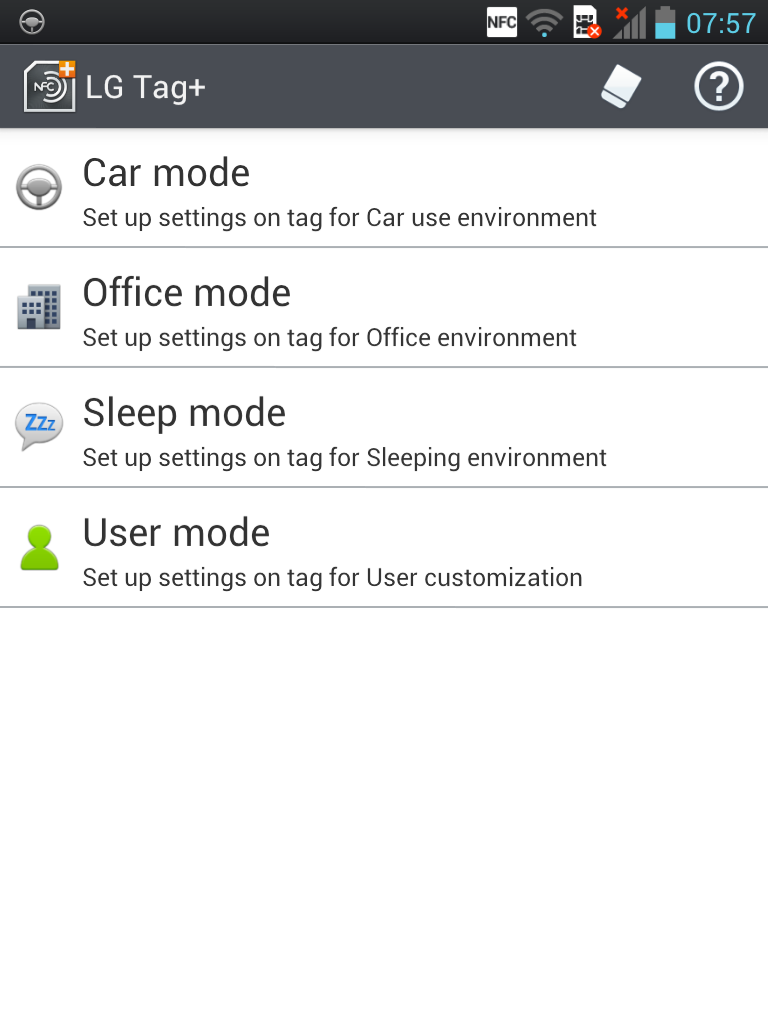 If you find LG’s NFC tag application a bit lacking, you can always use one of the many other tag writing apps on the Play Store which offer far more control.

While we all thought that using a stylus with your phone had gone the way of the dodo, the Galaxy Note clearly brought it back in vogue. LG tries to emulate that by bundling in what it calls a Rubberdium. 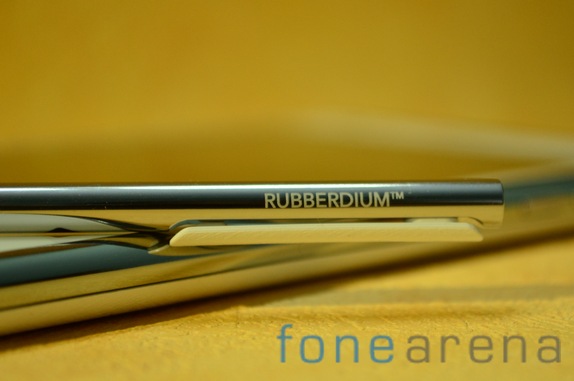 Lacking a Wacom digitizer, the Vu cannot offer any pressure based functionality when using the stylus. The stylus offers enough girth to hold comfortably but the lack of a place to stow it away on the phone means that most people will completely forget about it. 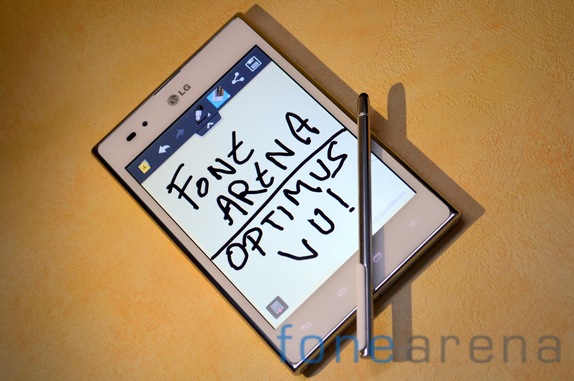 The quick launch button for the note taking app was a nice move by LG but the limited software support and lack of pressure sensitivity ensures that the stylus is a gimmick at best.

An 8MP camera can be found over at the back of the phone and is assisted by an LED flash for low light shots. We were positively surprised by the image quality from the camera module. 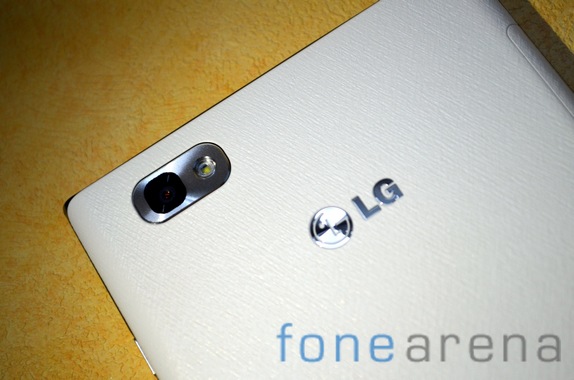 The camera takes highly natural looking photos with accurate colors. Focussing is quick in most cases. The camera app includes options to take photos in HDR mode and an in-camera panorama mode is present as well. 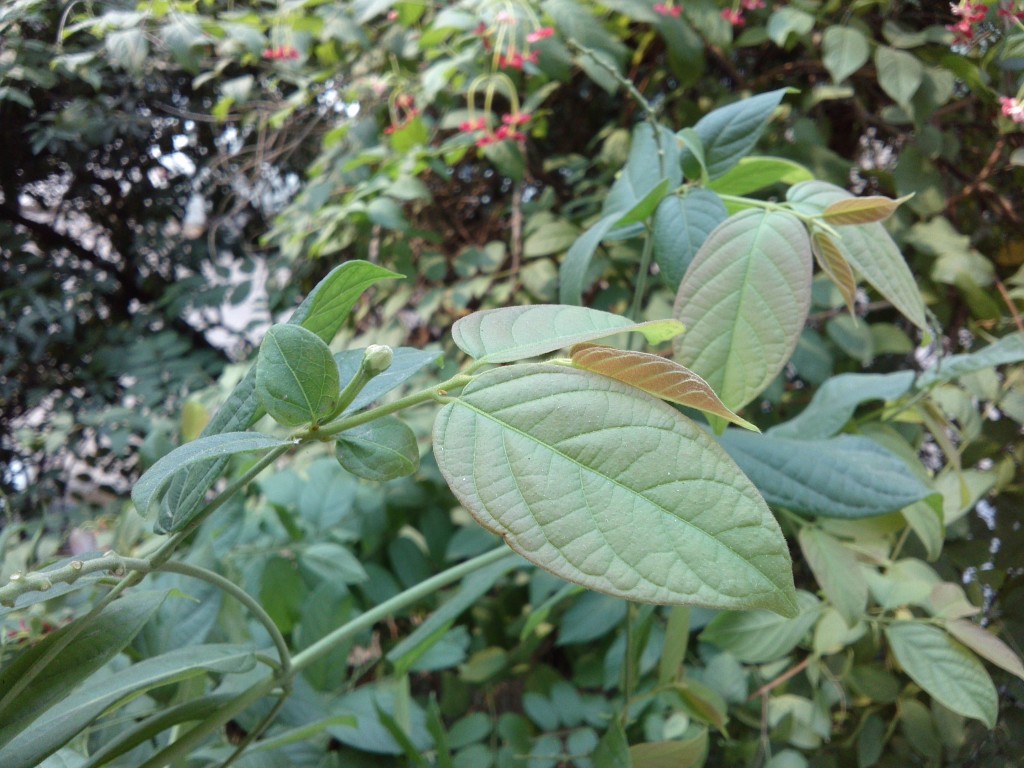 The sensor suitably adjusted the white balance and exposure settings resulting in a balanced image. In addition to the above mentioned settings, you can also adjust scene modes, resolution and ISO. 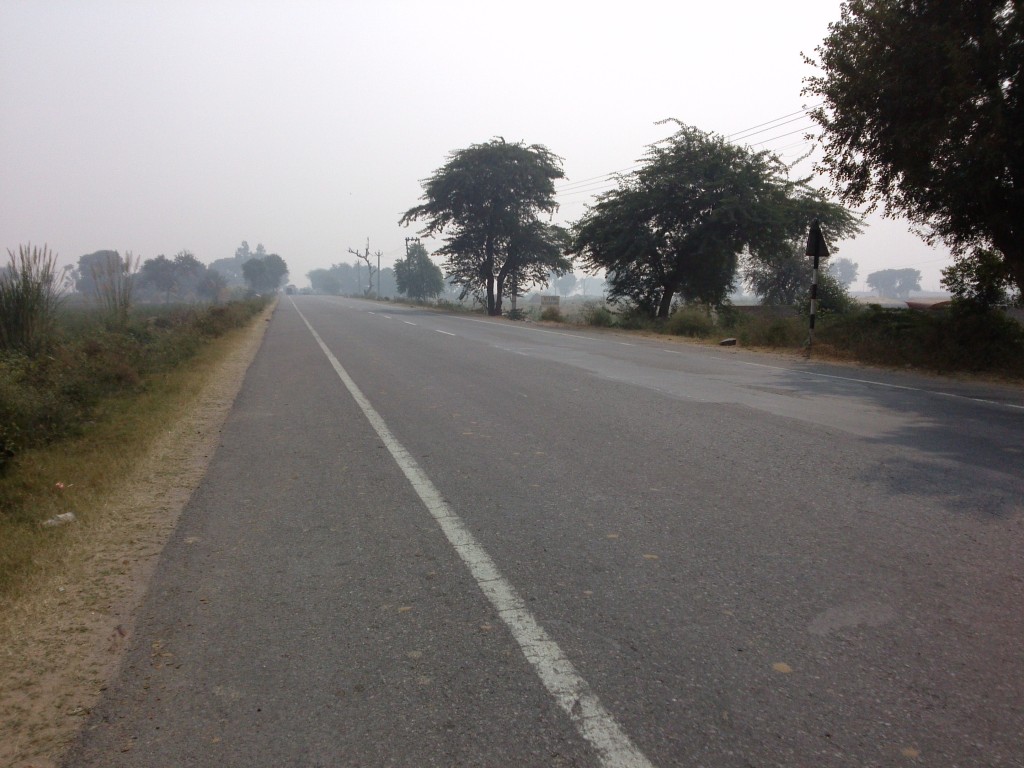 Tap to focus works as expected. You can then use the on-screen shutter key or volume key to take the shot.

The LG Optimus Vu uses a custom UI layer on top of Android ICS. The TouchWiz inspired interface provides seven homescreens, a skinned app drawer and a customizable dock. You can access power controls from the notification tray. 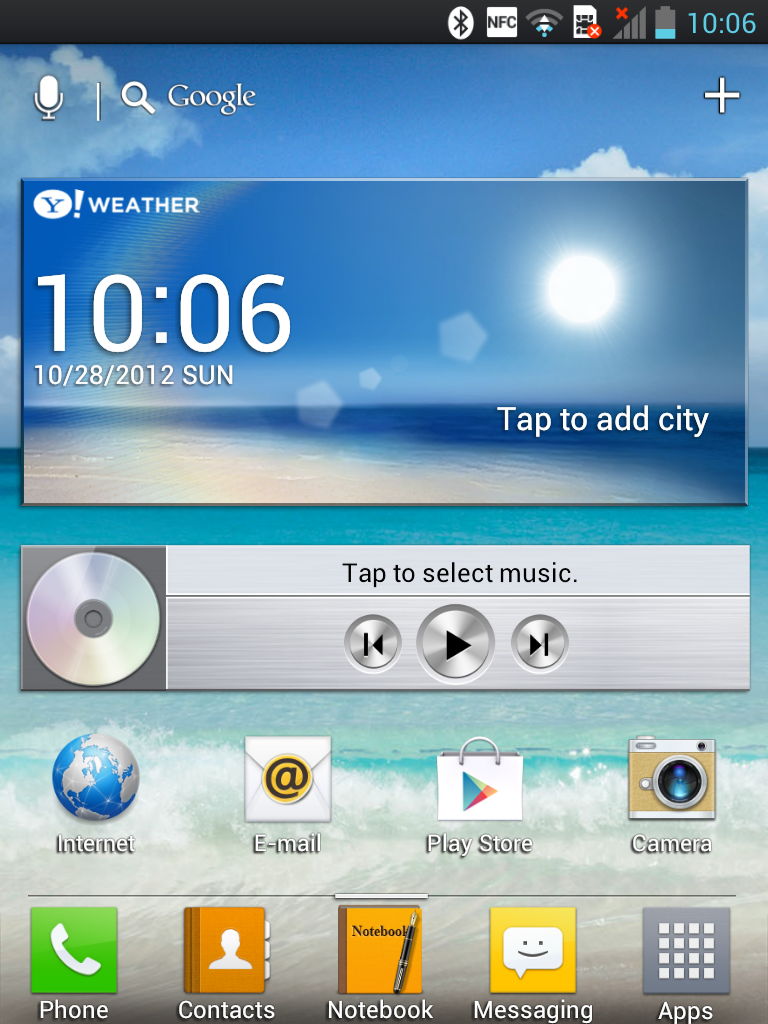 The app drawer is presented in a 5 x 5 matrix with tabs at the top letting you sort between all apps, downloaded ones and all widgets currently present on the phone. 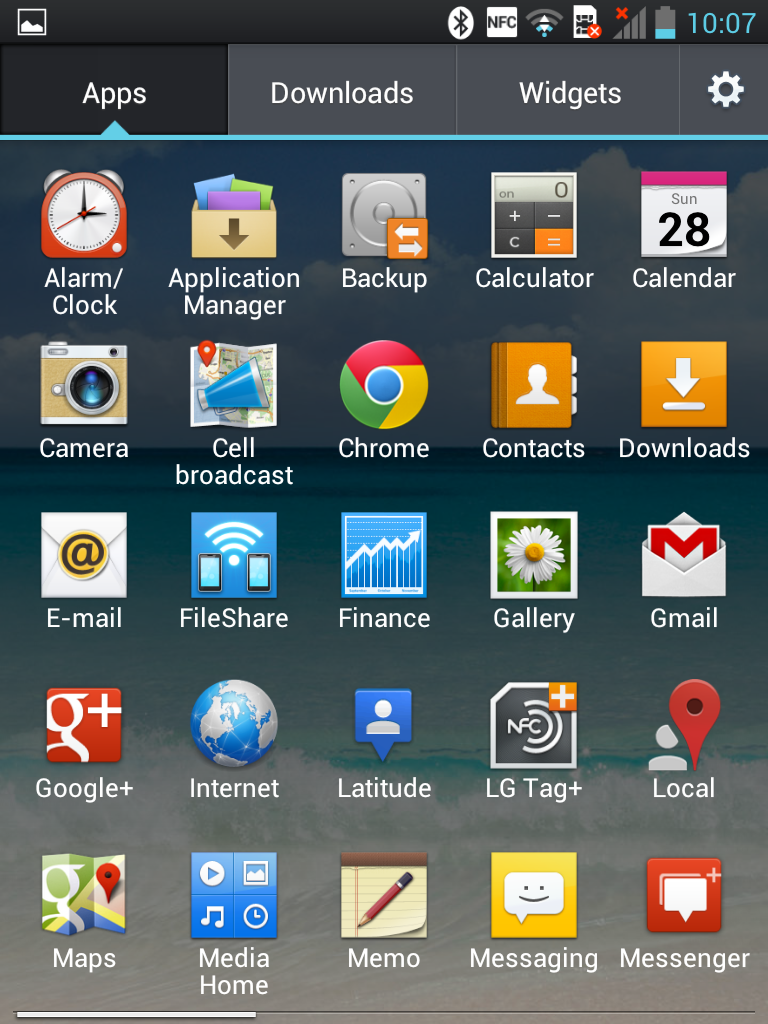 LG has thankfully refrained from bundling in too many apps and those that have been included are relatively useful. Yahoo weather, Finance and Polaris Office are some of the more obvious ones. LG also has its Video Wiz and Smartworld application preinstalled on the phone. 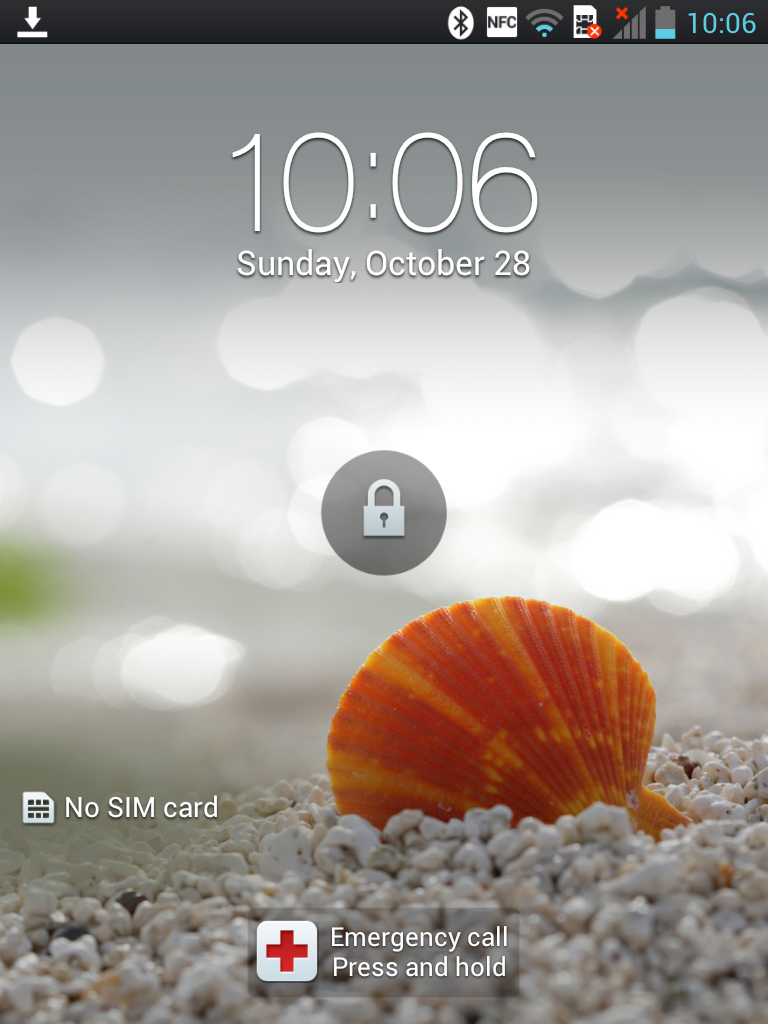 The lock screen unfortunately not used very effectively leaving a lot of free space all around. We feel that this space could have been better utilized to display more information like on HTC’s Android phones. 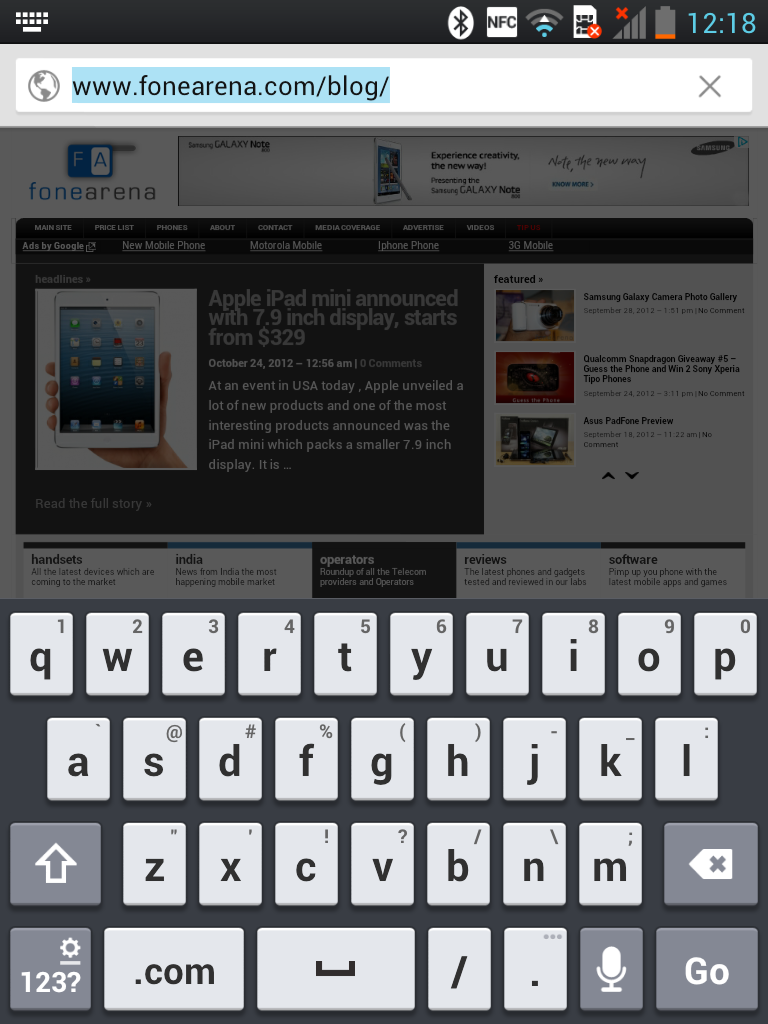 The particularly wide ratio of the screen ensures that using the keyboard is a delightful experience. The keys are well spaced out and large making it easy to type out rapidly and accurately.

The LG Optimus Vu is powered by a Tegra 3 processor and is clearly highly optimized as we didn’t observe even single instance of lag on the device even when pressed hard. 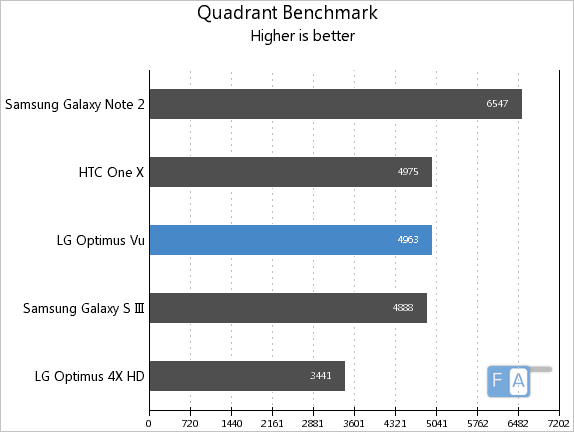 Quadrant scores indicate that the device ranks right up there with the latest crop of handsets though the Note 2 does handily outpace it. Quadrant is a good indicator of overall performance of the device and the Vu is definitely no slouch. 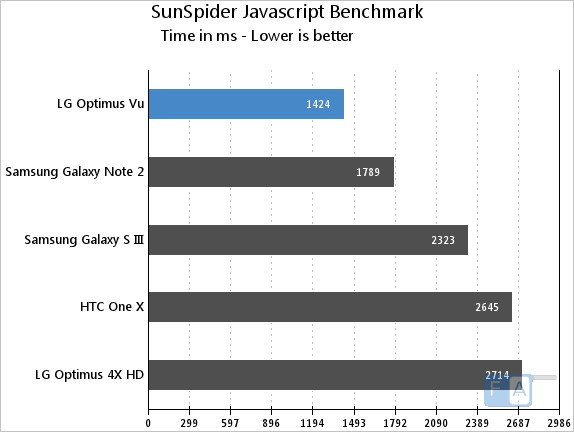 The Optimus Vu scores excellent timings in the Sunspider benchmark and managed to beat even the newly launched Note 2. Sunspider is a javascript benchmark which helps us get a better idea of the web browsing speed of devices. 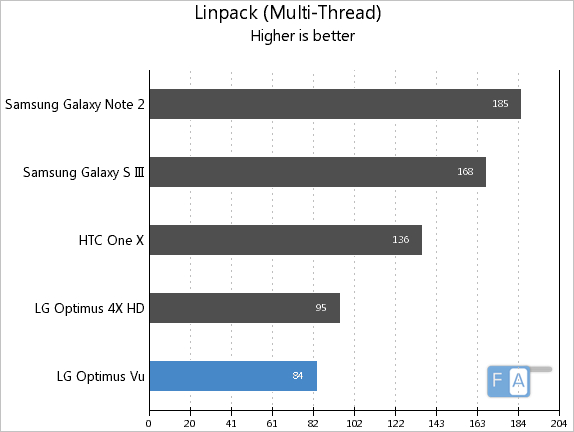 Linpack is one benchmark where the Optimus Vu really lagged behind. That said, these are just synthetic benchmarks and real life performance is solid.

The Optimus Vu is equipped with a 2,080 mAh battery pack which we felt barely sufficed considering the large high resolution display. We were left scrambling for the charger at the end of an average day. Heavy users will most definitely need to keep the charger handy considering the power hungry nature of the phone.

The Optimus Vu is one of those handsets which are hard to recommend despite having no glaring omissions. Solid internals, a beautiful screen and a good camera definitely work in its favor. 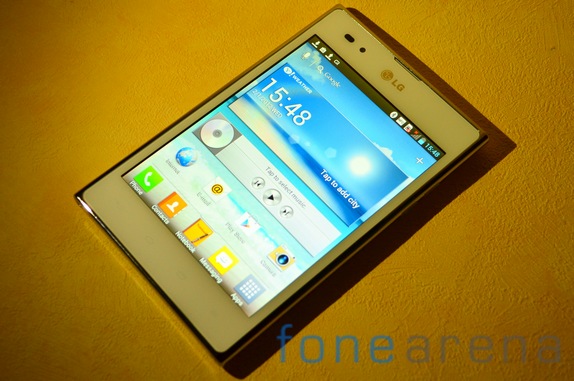 However no matter how generous the storage or optimized the software, you just can’t ignore the dimensions of the handset. Hard to hold and awkward to hold up while making a call, we find it hard to recommend the phone. Additionally, the inability to stow away the stylus further gets in the way of its limited appeal. Priced at Rs. 34,500 you’ll be better served by picking up an HTC One X or a Galaxy 3 instead of the LG Vu.