Micromax is well known for their low end budget hardware but they’ve also had a fair few innovative products over the years. Striking the right balance between performance and price is hard but it seems that the indigenous company might finally be on the right track. 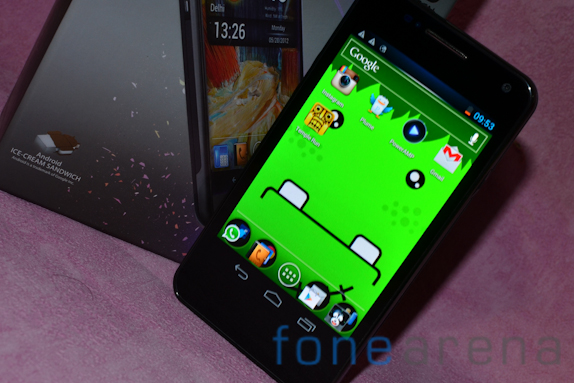 We got our hands on the newly launched Micromax Superphone Pixel and put it through its paces. Read on to find out how this ICS running device fared.

There’s absolutely no doubt that Micromax has learnt from consumer feedback. The hardware quality leaves little to complain about. The design of the phone is very reminiscent of the Samsung Galaxy S2 right down to the patterned back. The front of the phone is refreshingly clean with nothing to distract from the screen. 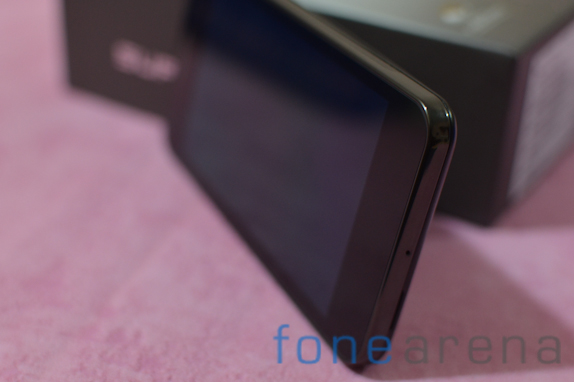 Micromax has gone in with an all touch design with onscreen buttons replacing the capacitive controls generally found below the display. The panel is covered with a Gorilla Glass display which should offer some manner of protection from scratches. 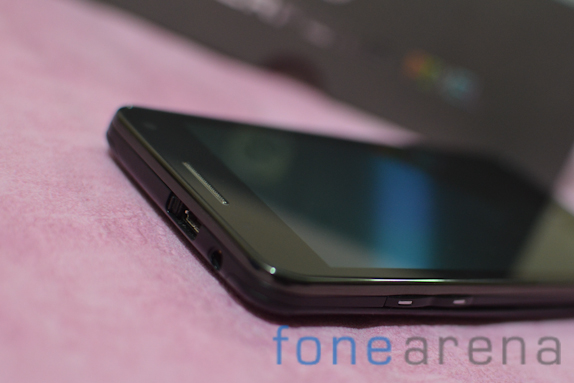 On the right we have a power key which works to switch off the display. On the left is the volume rocker key. Over all the phone has a very clean design with few buttons and distractions. The lack of a camera key was a bummer. 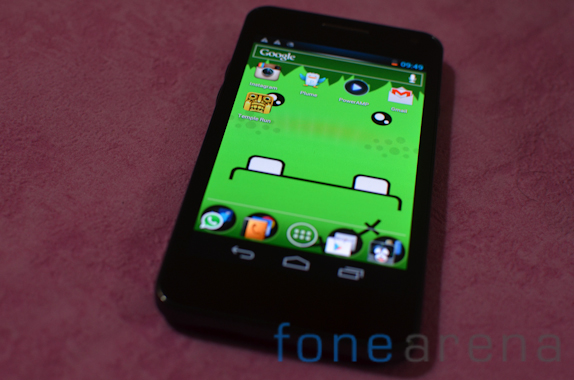 Coming to the screen, the Super AMOLED display is absolutely stunning. Resolution is WVGA which feels sufficient given the size and price point though we wouldn’t mind a qHD panel. The display is perfectly visible under sunlight and maximum brightness reaches eye searing levels. 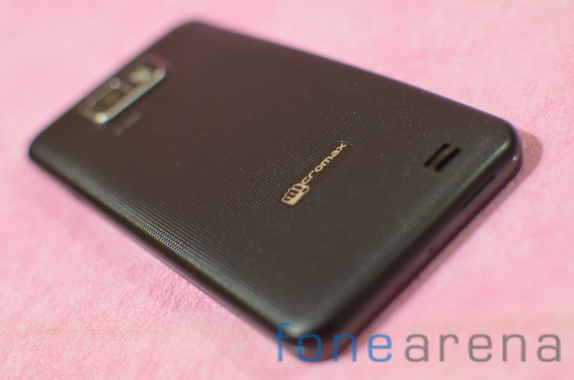 The back of the phone houses an 8MP camera with LED flash. Overall, the design of the phone doesn’t leave much to be desired. One of the better looking and feeling mid range devices out there and more so at the enticing price point.

The chipset here is a MediaTek MT675 combined with a PowerVR SGX 531 GPU. A potent combination, Android 4.0 runs like a charm on it with no lags whatsoever. RAM is 512MB which might be a bit low for all the power users but is generally enough for day to day usage.

As indicated by the Quadrant scores, the A90 (2370) comes close to and in some cases even beats higher range devices like the Sony Xperia U (2248).

With a score of 3950 in Antutu, the A90 has decent scores for its class of devices. The dual core Xperia U fares much better here. 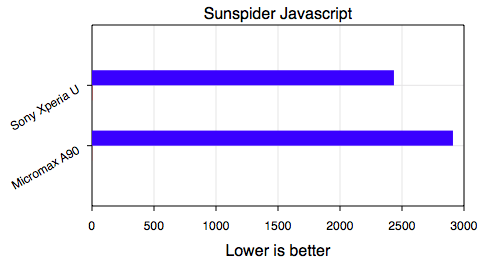 A score of 2900 in Sunspider Javascript is not bad at all for a device of its class. The dual core Xperia U scores marginally better at 2435 but in real life usage, the difference was minimal. Synthetic benchmarks tell only half the tale. In terms of usability, there is no reason to be concerned as the phone remains speedy even under fairly heavy usage.

Software wise there isn’t much to say. The A90 is running stock Android 4.0 ie Ice Cream Sandwich with the only customizations being a few custom icons. 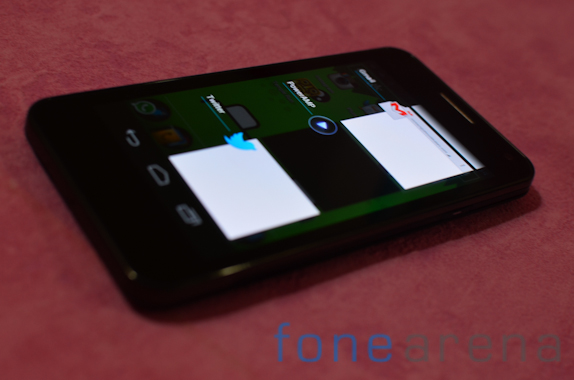 Micromax has also bundled in a few apps but most of them turn out to be useful ones like Whatsapp instead of bloatware. Given that the phone comes pre rooted, it shouldn’t be too hard for a user to remove these manufacturer installed apps. We really wish more manufacturers would go down this route instead of providing customers a sub par experience. We’re looking at you, Touchwiz !

The inbuilt storage on the Micromax A90 is 4GB of which about 2GB is available. Memory can be extended by 32GB via the microSD slot. The smartphone supports the usual mp4, mkv and avi file formats for video playback. The MediaTek MT6575 chipset supports video playback up to 720p.

The camera on the Micromax A90 is an 8MP unit which takes remarkably good stills in sufficient light. Low light performance predictably suffers with a fair amount of noise and visible banding. 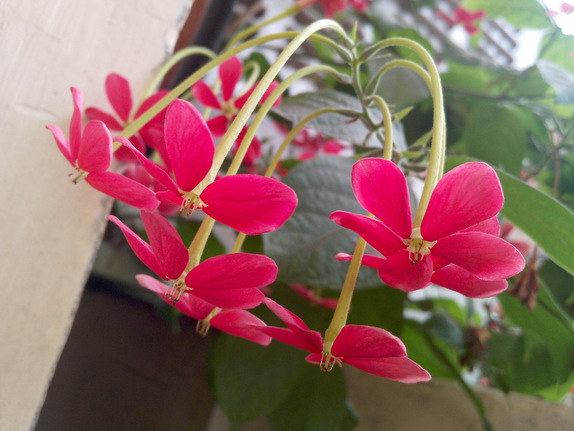 Day light images are crisp and noise free for the most part. Auto focus is very quick as long as conditions are ideal.

For a 1600 mAh battery, you won’t expect battery life to be anything out of the ordinary. You’re in for a pleasant surprise ! The phone keeps going on and on. Between the optimized software, low power processor and fairly large battery, the A90 is able to squeeze in over a day of usage. Even after heavy usage, the phone always had battery life left over to use the next day in our tests.

You can check out a quick video demo of the phone below.

The Micromax brand name is still associated with low end cheap phones and this legacy baggage might hold back what is otherwise an excellent product. With the perfect mix of good performance, brilliant display and fantastic pricing, it is hard not to recommend the A90. 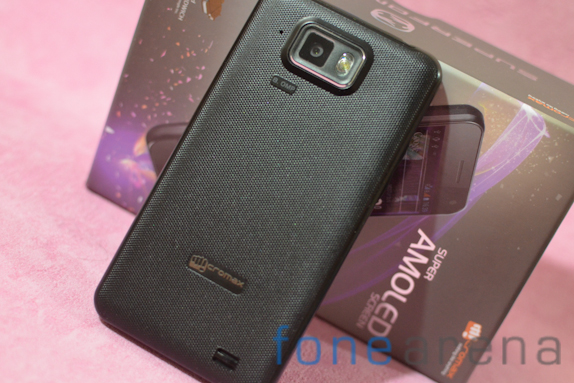 We loved the display and the fact that the phone comes with stock Ice Cream Sandwich. Additional RAM is one area where we believe Micromax could have worked on. We would wholeheartedly recommend this phone to anyone looking for a good Android experience on a budget.

2. 512MB RAM may be limiting for power users