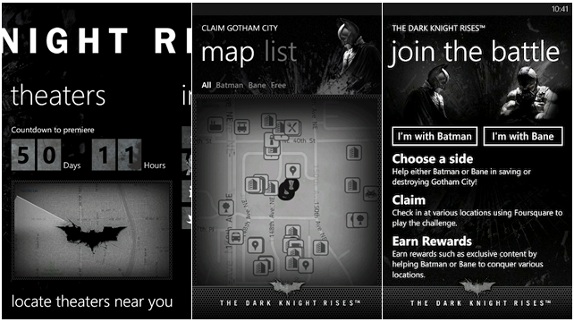 It also has The Dark Knight Rises game – Claim Gotham City that has people choose sides – Batman or Bane – and claim and defend places through real-life Foursquare check-ins. Users will be rewarded with TDKR exclusive content for claiming places for their side and can play solo or with others.

In addition to these features, the app also has A countdown to the film’s US release on July 20th and theatre locator using Nokia Maps. and Film Info & Social Buzz that offers background on the film and cast bios, fans will be able to track all the live social buzz related to the film on Twitter.

Download The Dark Knight Rises App for Nokia Lumia Phones from the Windows Phone Market Place (opens only on devices, only in select regions) for free.