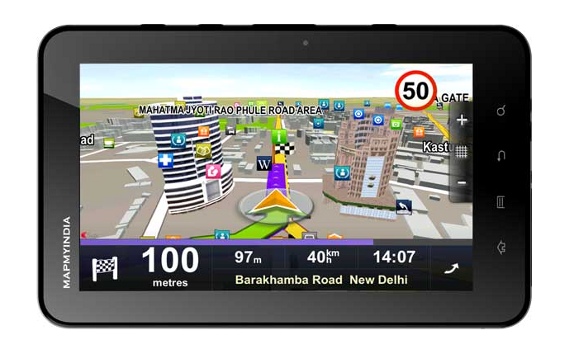 MapmyIndia, popular for its GPS navigation devices, has launched CarPad in partnership with Qualcomm that runs on Android 2.2 (FroYo). The CarPad could be mounted on the font or back seat of the car and it could be used both for navigation and entertainment. It has 7 inch Capacitive Display, and it is powered by Qualcomm Snapdragon S1 processor. It also has 3G and Wi-Fi connectivity and GPS with MapmyIndia’s Aura 3D navigation interface.

It comes with pre-installed MapmyIndia Aura, which is MapmyIndia’ latest 3D navigation interface, and it also lets you stream photographs of places and discover people and friends nearby, share their location and message with others.

The MapmyIndia CarPad comes with 8GB memory card and tablet accessories such as headrest mount, windshield mount, CarPad holder. It will be priced at Rs. 22,990 and will be available for sale from 15th September, online at mapmyindia.com/carpad, electronics stores, car showrooms & car accessory shops.