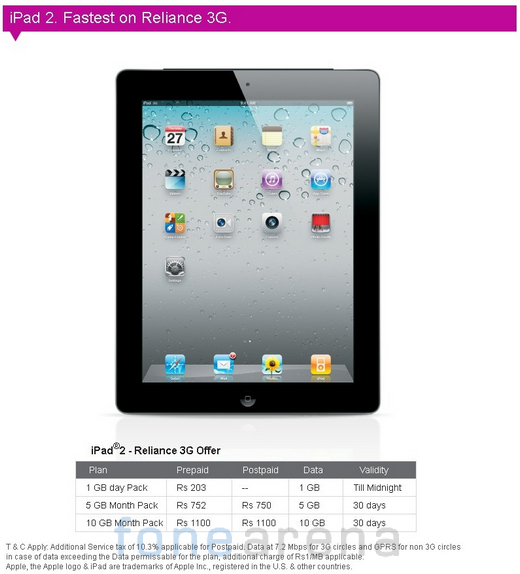 Reliance Communications or RCOM has outed its 3G data plans for the iPad2 and it makes a lot of sense as many iStores selling iPad2s in India are owned by Reliance Retail a sister company.Reliance has been boasting of a superior 3G network through it’s ad campaigns recently and we are not exactly sure if claims are true. But if you are a Reliance 3G user and also carry along an iPad, these plans might be of interest to you .

The promo indicates only plans for the iPad 2 , we are not sure if it is applicable for the first gen iPad too. There are 3 plans

The monthly packs are available both on prepaid and postpaid. The daily pack is available only on Prepaid.

Reliance had won a license for 3G spectrum in 13 circles and 3G data at 7.2 Mbps will be available only in these circles , the iPad will work only over GPRS in circles where Reliance does not have a 3G license.

These plans are very expensive compared to BSNL who offers 3G services almost in every nook and corner of the county. Do check out BSNL 3G iPad plans too.