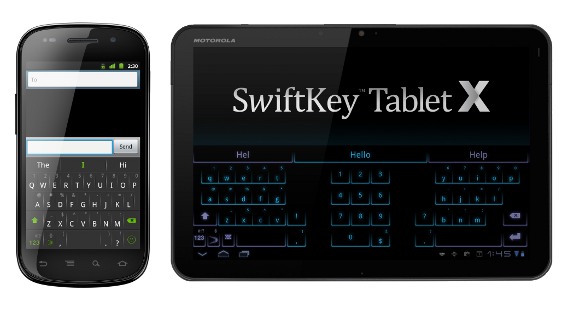 One of the popular Android keyboard, SwiftKey X is now out of beta and SwiftKey Tablet X debuts for the Android tablets. Both these are now available in the Android Market for purchase. SwiftKey was launched last year as beta and it has reached 1.5 million downloads since then.

The SwiftKey X Beta was launched this May and it was updated frequently based on the user’s feedback. This has features like Fluency2.0 that predicts the next word to be typed, Cloud learning from the user’s Gmail, Twitter and Facebook for frequently used words and Integration of Touch Interaction Modeling that improves word accuracy and predictions based on user’s typing precision.

The SwiftKey Tablet X has similar features but it also includes split key layout for typing easily with the thumbs on the larger screens. This feature is already available in Swype 3.0.