I have had a Nokia E6 in my hands for a couple of days now, and while that isn’t enough to fully explore every aspect of the phone, it is enough to grasp the essence behind the Nokia E6, to love it for what it is, to forgive it for what it isn’t, and to enjoy one of the last fine moments of Symbian on a mobile device. 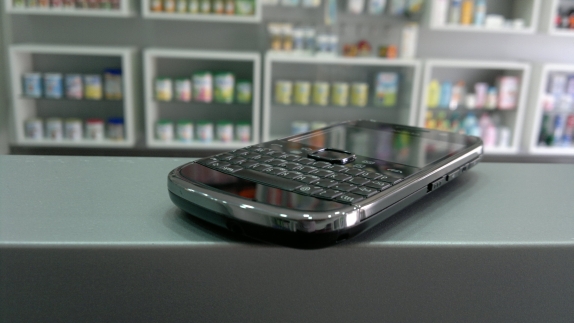 The Nokia E6 is not a high-end phone

The E6 is not an HTC Sensation or a Samsung Galaxy S2 or an iPhone 5. It does not boost the latest cutting edge quad core processors, nor does it come with a camera that can take a picture of a fly from 100 feet and still make it look amazingly sharp and detailed. It does not aim to compete with that league, nor will it bring back the Symbian fans who left for another platform. It does cost money however, and that is for the perfect call reception, the pentaband GSM support, the 1500 mAh battery, and the great build quality. Scratch that. Stellar build quality. It is a mid-range phone that ticks many boxes and leaves many others.

The E6 runs Symbian Anna, and it’s adequate. This form factor, this screen size, this design, they wouldn’t fit many other mobile OSes as well as they fit Symbian, they wouldn’t work for iOS or WP for example, and they would look ridiculous for Android. For the purposes of messaging, calling, social networks, and quick communicating in various forms, the E6 with Anna works superbly. The E6 fits in the hand, it holds nicely against the ear, it can be typed on pretty fast, and it presents succinct information on the small screen, enough for what most people need. Symbian Anna is an end-of-life platform, but that also means it’s stable, it’s mature, it doesn’t need any firmware update to add basic features like copy/paste or bluetooth file transfers. No, it’s a fully developed and featured platform. Together, the E6 and Anna, they are perfect.

The Nokia E6 is what the E72 should have been

If the E71 went out and got some facial plastic surgery to look a bit like an N8, it would come out as an E6, not in terms of hardware, but of software. While the E72 was not a major leap forward by comparison and did not justify the upgrade for many people, the E6 is a good leap forward. More RAM, faster processor, better software, better camera and video recorder (except for the lack of AutoFocus thanks to EDoF), cleaner design, more storage, a higher resolution touchscreen, USB-OTG, and basically, overall improvements in every section you could think of.

The Nokia E6 is a niche device for the masses

The Nokia E6 is a crowd-pleaser for what is quickly becoming a teeny-tiny crowd. The E71 before it opened the floodgates and democratized candybar QWERTYs for the masses in countless regions that Blackberry hadn’t reached yet. There still is a market for this form factor, in hyperactive thumb typing teenagers and busy businessmen alike, although many smartphone owners have moved to larger touch-only slabs.

Most importantly: The Nokia E6 is NOT a pretentious phone

It does not pretend to rock your multimedia world like the X7 does, nor to give you “Success” and solve all your business woes like the E7, nor to competitively end all other operating systems, nor to salvage Nokia’s image in every geek’s eye. Yet, it has a small but gorgeously sharp high resolution screen, and it is fast and responsive, especially when your fingers start flying on its QWERTY keyboard. It might not come with all the bells and whistles of huge third party application stores available on other platforms, but the essentials are covered. For what it is, for what it aims to be, for the “productivity” aspect that it is being marketed for, the E6 is awesome.

The Last Of The Great Symbians

There are few phones you can put in “The Great Symbians” category, like the N95 and the E71. Although old, these leave nostalgia and many great memories in the minds of everyone who used them. The E6 fits in that league. It will probably be the last of the great Symbians, because of Nokia’s move for Windows Phone, and because no matter how much you argue about it, Symbian is no longer great on other form factors: the larger touch screen form factor is taken by Android and iOS like a storm.

So there you have it. If you are or were a Symbian fan, the E6 is a drop of nostalgia into what once was the greatest of the mobile world. It’s a wonderful phone, a fantastic productivity tool, it just works, and it’s probably a collector item for the QWERTY form factor lovers as a testimony of what can best be done with those, before they get eaten away by the touchscreen slabs.