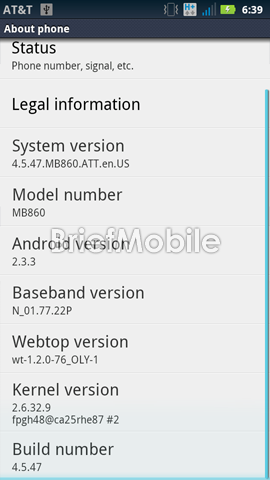 Motorola Atrix 4G is Motorola’s first ever dual-core device rocking on Nvidia Tegra 2 processor. Atrix 4G is for sure an amazing device with some good specs and it’s currently exclusive to AT&T in USA. AT&T recently dropped the price of it and made it available for only $99 on contract which was actually good news for people who were looking forward to it. Now I am about to give you another news and the good news is that Atrix 4G will be receiving Android 2.3 update soon. As we know that Atrix is a good device but the only feature its missing is Android 2.3. Brief Mobile is now reporting that it will receive Android 2.3 officially next month and Motorola and AT&T are currently testing the upcoming update.

Android 2.3.3 is not the latest version of Gingerbread, as we know that Google recently launched Android 2.3.4 which brings Google Talk video chat capability to Android and its currently available for Nexus S. Maybe Motorola will bring Android 2.3.4 to Atrix 4G as final built, but still not confirmed. Anyway folks, hopefully your Atrix 4G will receive Gingerbread soon, so who’s excited?