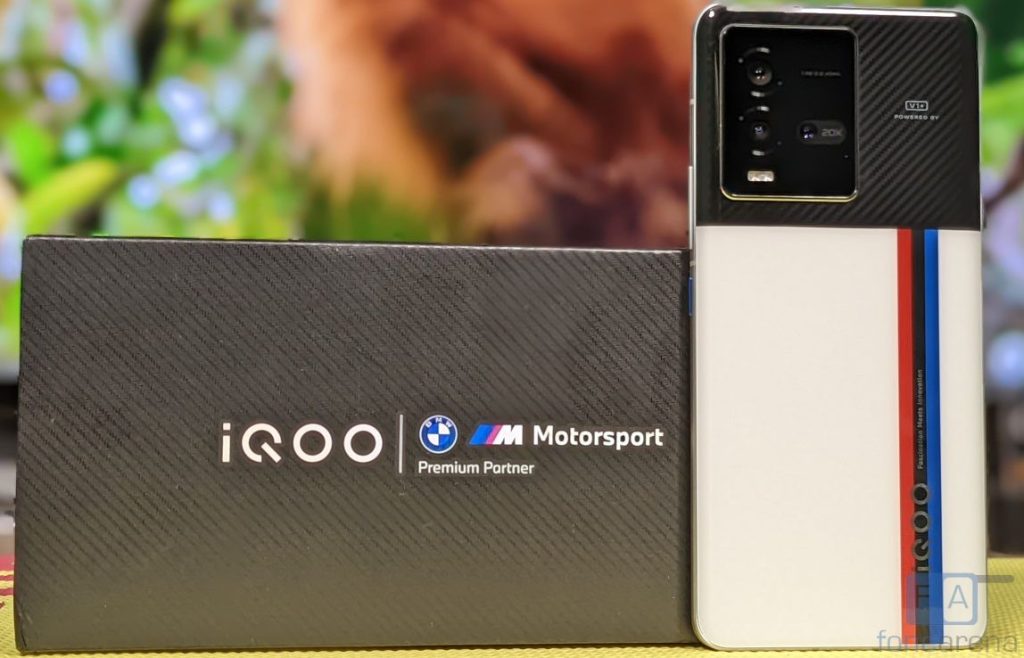 iQOO launched its iQOO 9T smartphone in India this week, and it is one of the first phones in India to be powered by Snapdragon 8+ Gen 1 SoC. This is the upgraded version of the iQOO 9 that has several upgrades including a large 6.78″ FHD+ 120Hz E5 AMOLED display, upgraded camera and packs a larger 4700mAh battery. Is this the best phone in the market in the 50K price range? Let use dive into the review to find out. 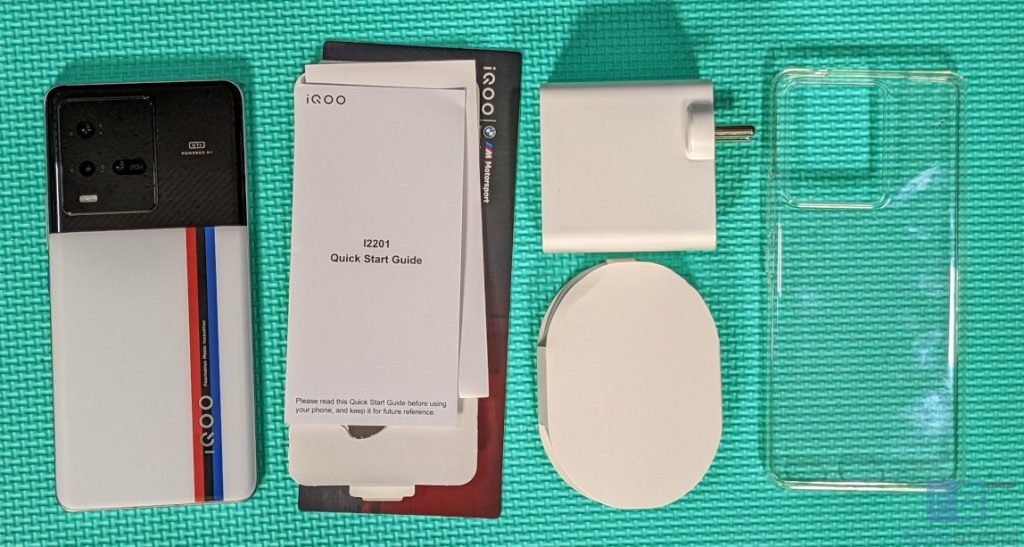 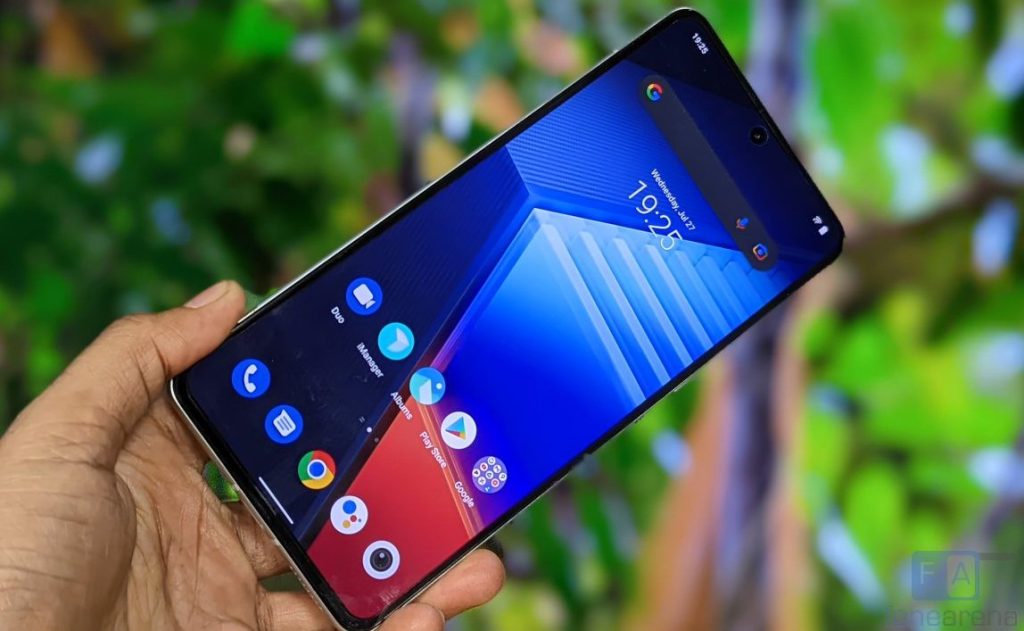 You can select from standard (default), professional and bright screen colour modes. The 120Hz refresh rate, 360Hz touch sampling rate and 1200Hz instant touch sampling rate offer a smooth user experience, especially when you are scrolling through the UI and when gaming. You can select smart switch or force it to 60Hz or 120Hz. Visual enhancement optimizes the color and contrast of some pictures for more vivid display effects, says the company.

It also has HDR 10+ support, which works for YouTube and Netflix. The phone doesn’t have a notification LED, but this has an always-on-display that shows contextual info and notifications all day or as per schedule. It doesn’t consume a lot of power since this is an AMOLED screen, but the company says that it increases the power consumption. The screen has SCHOTT Xensation Alpha glass protection. 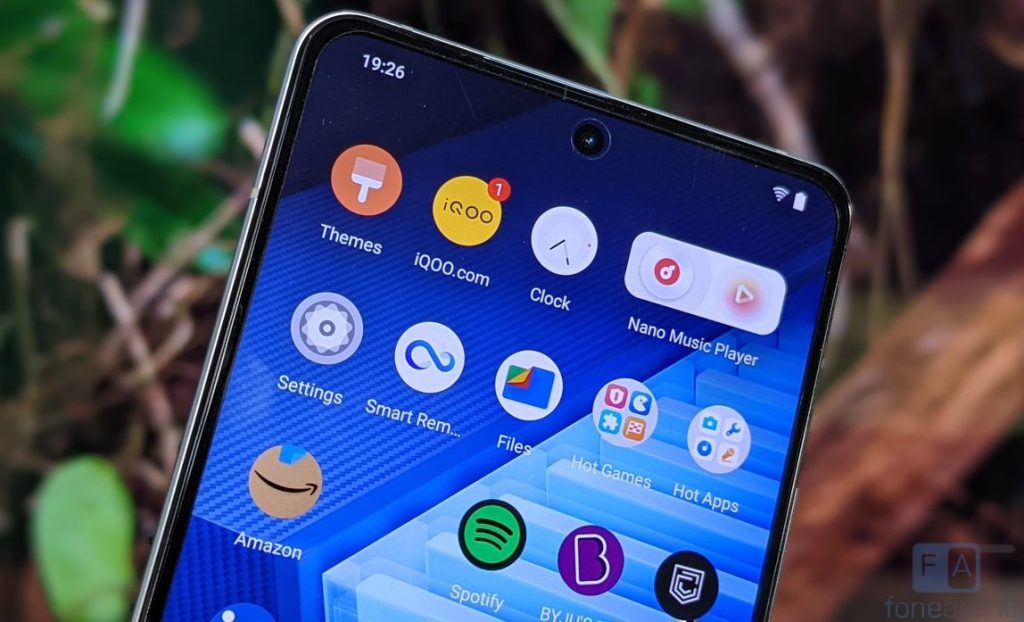 The phone has a 16MP front camera inside the notch. There is an earpiece on the top edge which also works as a secondary speaker. 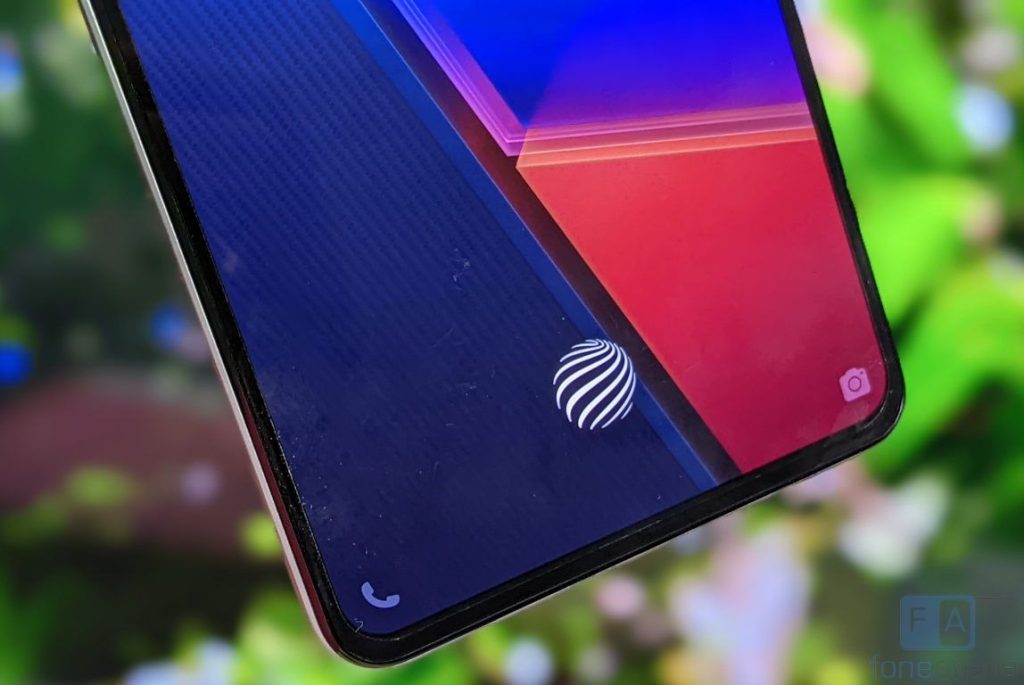 You can also notice a small bezel below the screen. The haptic feedback is good as well, thanks to the Dual X-Axis Linear Motors.

Coming to the button placements and ports, the power button is present on the right side along with the volume rockers. There is nothing on the left side, so you just see the antenna band. The dual SIM slot, primary microphone, USB Type-C port and the loudspeaker grill are present on the bottom and the secondary microphone is present on the top along with the IR blaster. The phone doesn’t have an expandable storage. The phone has a metal frame with a matte finish. Since it weighs 207 grams, it is a bit heavy. 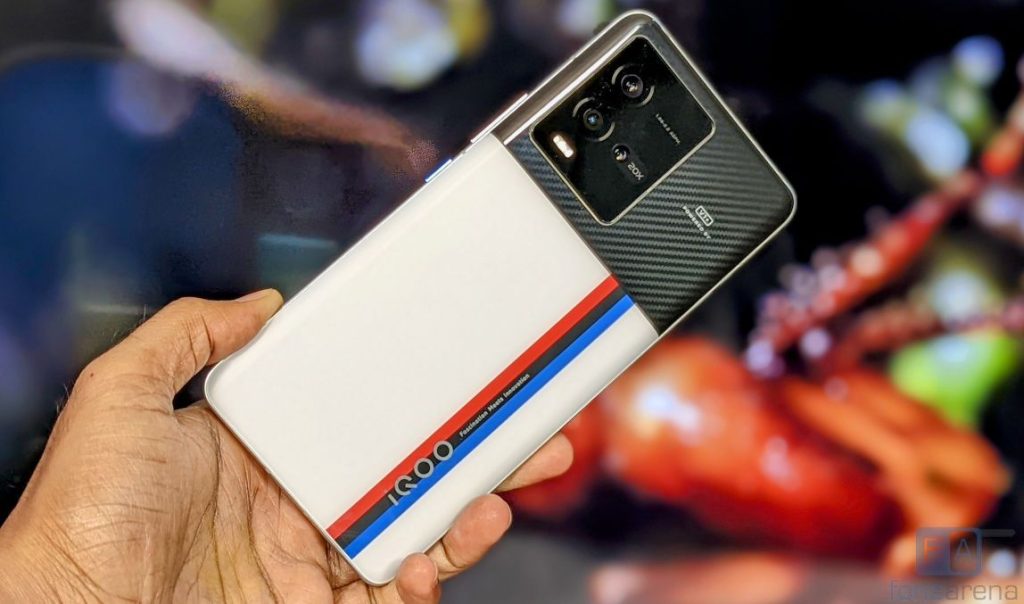 The phone has a glass back. The Legend version that we have has a dual-tone finish with a kevlar-like finish near the camera part, and the remaining part has BMW strips with the iQOO branding. The Alpha model has an all-black look. The phone has IP52 ratings, making it splash resistant.

The camera UI is the same as other phones running Funtouch OS 12. It includes several features such as AR stickers, Pro Sports mode, double exposure, dual view, 64MP mode and more. Even though the phone has a 50MP rear camera, the final output is 12.5MP in size after pixel binning, and the front camera output is 16MP. There is a V1+ chip for Real-Time Extreme Night Vision

Coming to the camera quality, the daylight shots are good, and it is recommended to enable HDR option which automatically switches on HDR according to the shot, so that the dynamic range is good. The camera can focus quickly. The 13MP ultra-wide camera does a good job, and also lets you capture macro shots.

You can also enable auto macro option, so that it switches to the ultra-wide camera when you get close to a subject. There is also a 12MP portrait camera that offers 2X zoom. You can adjust the aperture manually in the portrait mode for the best background blur. Low-light images are good, but it could have been better. The night mode is useful, thanks to the optimization.

The 16MP camera is good in daylight, and the front camera portrait is decent as well, but it is not the best when it comes to low-light.

Check out some camera samples below

It can record videos at 4k resolution at up to 60 fps from the rear camera and the front camera supports 1080p 30 fps recording.  There is also a night video mode option. It has standard and ultra stabilization, but the resolution is down to 1080p in ultra option since it crops the content. OIS does a good job in stabilization. Wish it had the gimbal stabilization from the iQOO 9, which was a unique feature in that phone. It also lacks HDR video recording.

Check out the video samples

Coming to the software, the phone runs on Android 12 with Funtouch OS 12 on top.  It has Android security patch for July 2022. The company has promised 3 years of Android updates and 4 years of monthly security updates.

Apart from the usual set of utility and Google apps, it comes preloaded with a lot of apps such as Facebook, Spotify, Byjus, Cred, LinkedIn, Netflix, and HealthifyMe. These apps can be uninstalled, but they come back after reset.

The phone has an optical in-display fingerprint sensor which immediately unlocks the phone just by keeping your finger on the sensor. You can add up to 5 fingerprints. There are different animation styles that display when you unlock, which you can disable. The phone also has face unlock that can unlock the phone in seconds, but it is not as secure as fingerprint.

The default Music Player also has equalizer and DeepField sound effects. It doesn’t have FM Radio support. There is audio super resolution, and super audio features. Audio through the stereo speakers is crisp and loud. The speaker quality is one of the best in the range. Audio through the headphones is good as well. This has Widevine L1 so that you can play HD content on Amazon Prime Video, Netflix and other streaming apps. It also supports HDR playback on Netflix and YouTube. 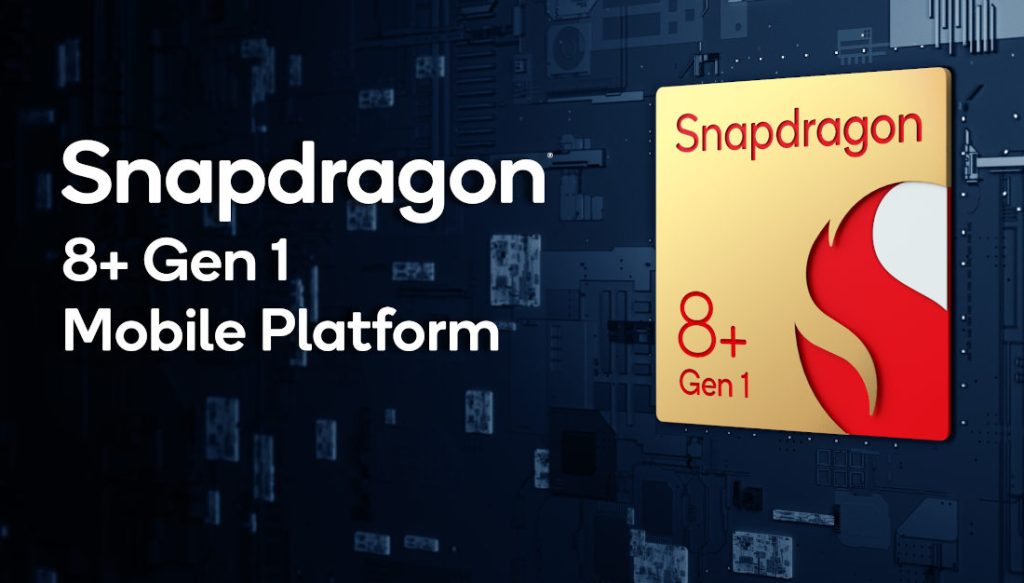 Thanks to new TSMC’s 4nm fabrication processor, this promises 30% power reduction in the CPU. This also offers 10% faster GPU performance. The phone has large 3930mm² vapor chamber liquid cooling, and the company said that it has high-power graphite which increases the density by 10% compared with the common graphite. The total cooling area is 29022mm².

We did not face any issues or frame drops in the graphic-intensive games like COD, BGMI and Genshin Impact. It reached maximum 39º in our testing indoors in Wi-Fi, but this might vary outdoors in 4G.

For the gamers, it has In-Display Dual Monster Touch which, so the screen is divided into left and right areas with L and R keys, assisting in pressing any operating position, easily triggering the mapping in the game, and two fingers are better than four fingers while playing the heavy battle games Check out some synthetic benchmark scores below. 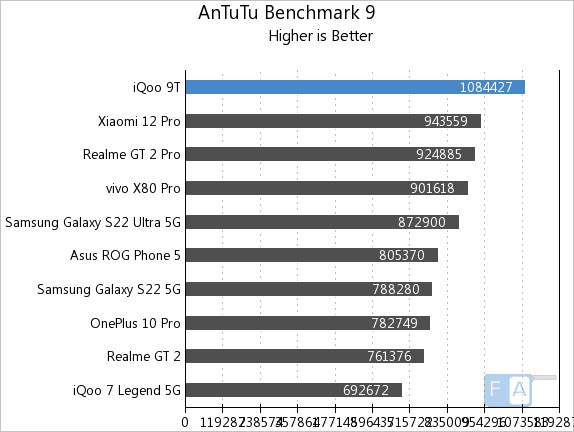 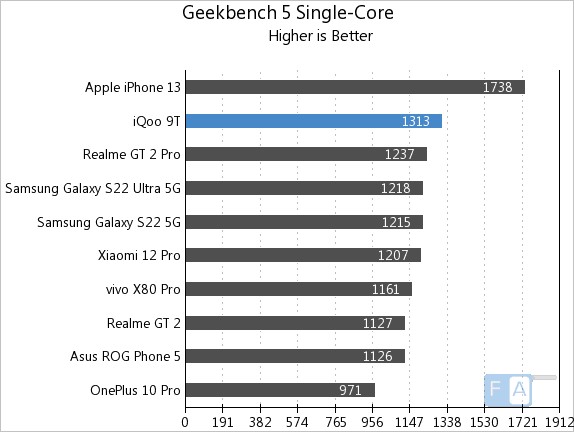 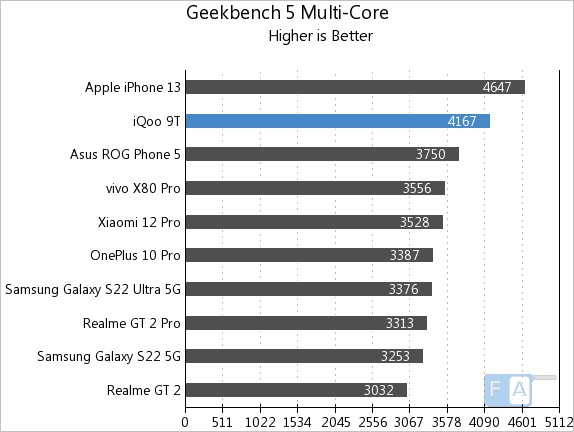 Coming to the battery life, the phone packs a 4700mAh (typical) battery, which is decent for a mid-range phone. It can easily last for a day with heavy use and for 2 days with typical use with 4G enabled and multimedia, thanks to the optimization.

I got over 5 hours of screen on time with 2 days of use, mostly on Wi-Fi. Since the phone has support for 120W fast charging, it can charge from 0 to 50% in about 10 minutes and up to 100% in about 25 minutes, even though the company claims it to be around 20 minutes.

At a starting price of Rs. 49,999, the iQOO 9T is an all-rounder that ticks all the box. Compared to the iQOO 9, the 9T is a good improvement when it comes to display, SoC, camera and the battery. Wish it had retained the gimbal stabilization.