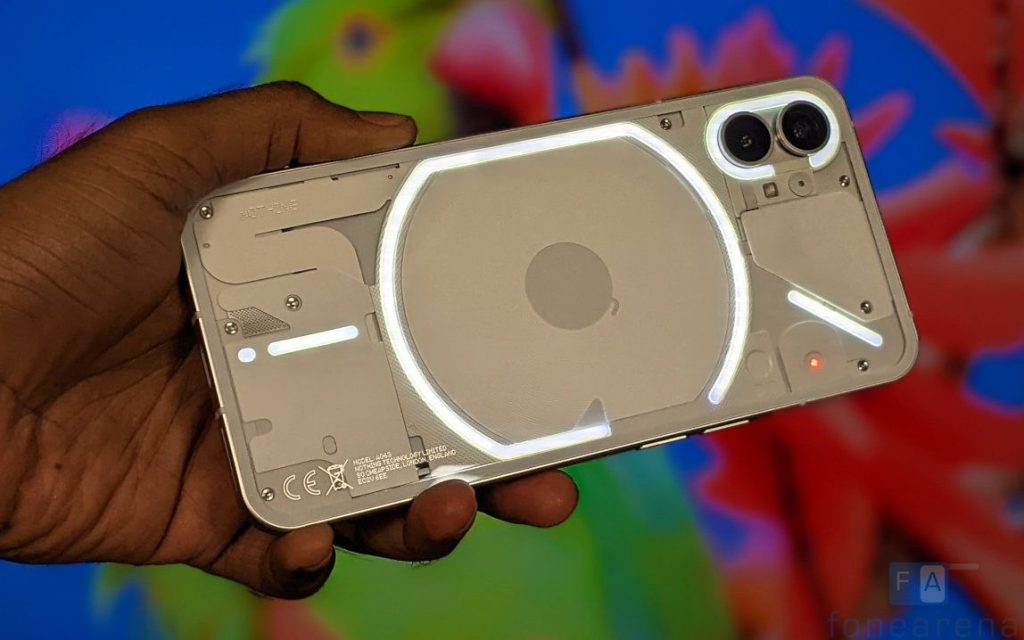 London-based Nothing launched the Nothing Phone (1), the company’s first smartphone, last week, after a lot of hype. It has a unique transparent design with LED lights on the back. It has a FHD+ 120Hz AMOLED screen, Snapdragon 778G+ SoC and also comes with support for wireless charging that you rarely see in devices in the price range. Is the phone worth the price? Let us dive into the review to find out. 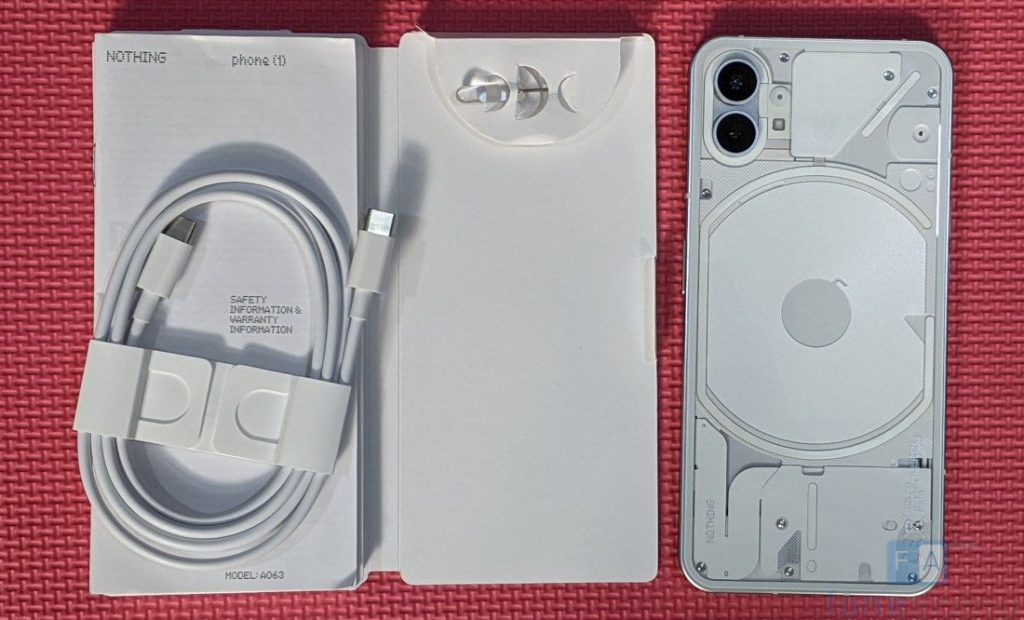 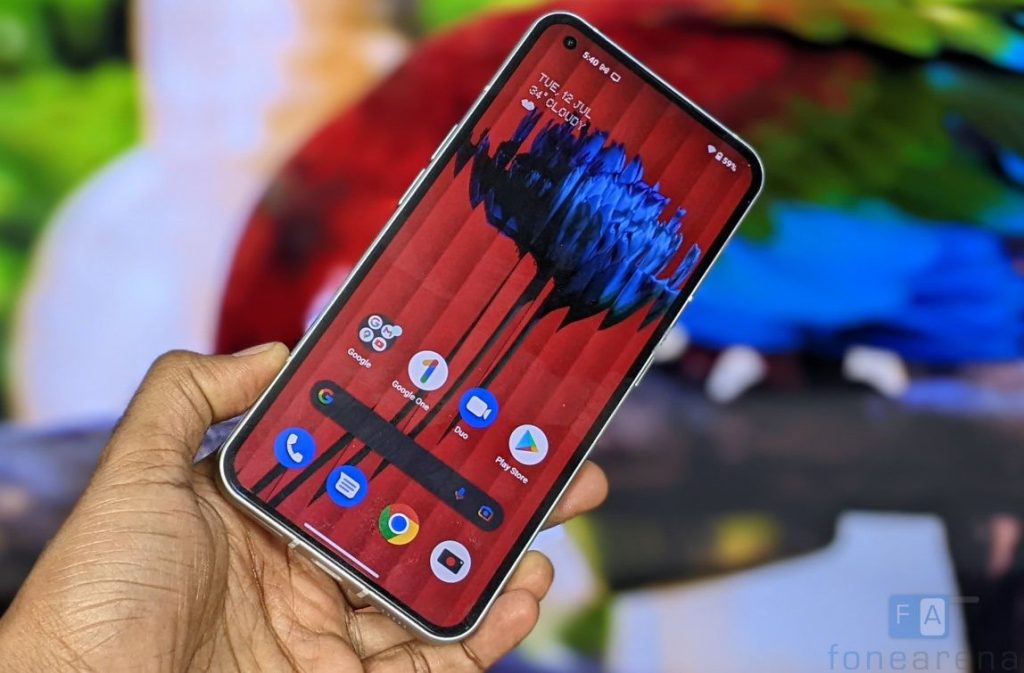 Starting with the display, the Nothing Phone (1) has a 6.55-inch Full HD+ flexible OLED display with a pixel resolution of 2400 x 1080 pixels, 20:9 aspect ratio and a pixel density of about 401 PPI. The display is bright, thanks to 500 nits (typical), 1200 nits peak brightness, which is enabled when you are watching HDR content.

The phone has a 120Hz refresh rate display can switch between 60Hz, 90Hz and 120Hz according to the content. It has 240Hz touch sampling rate. When enabled, it offers a buttery smooth user experience, especially when you are scrolling through the UI and when gaming. It also has HDR 10+ support, which works for YouTube.

Under the display options, there are different options to adjust colours based on your preference. There is also a night light option that lets you reduce the display’s blue light emission, so it doesn’t cause eye strain when you are reading at night. There is Dark mode, similar to other Android phones. It has an always-on display option, but it doesn’t offer a lot of customization, and is similar to the Pixel. It doesn’t have MEMC or DC Dimming option. The phone comes with Corning Gorilla Glass 5 protection. 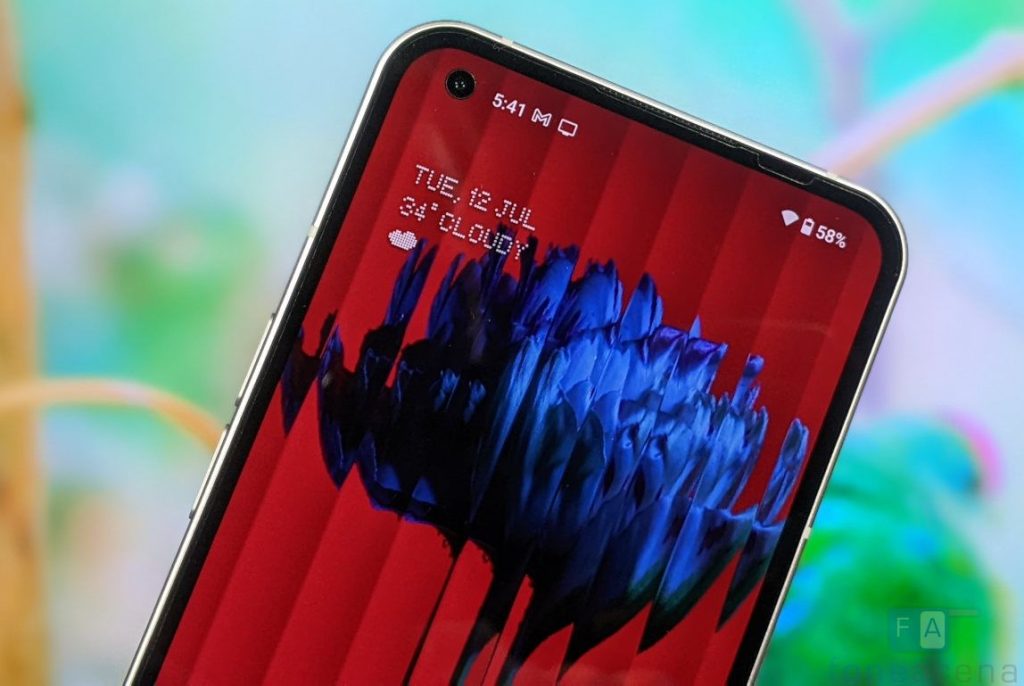 The phone has a tiny centre punch-hole that houses a 16-megapixel camera, which doesn’t disturb when watching videos since it just occupies a small space. Above the display there is an earpiece on the top edge which also doubles up as a secondary speaker. The phone also has the usual set of proximity and ambient light sensors, as well as a gyroscope and a magnetic sensor, otherwise known as a magnetometer. 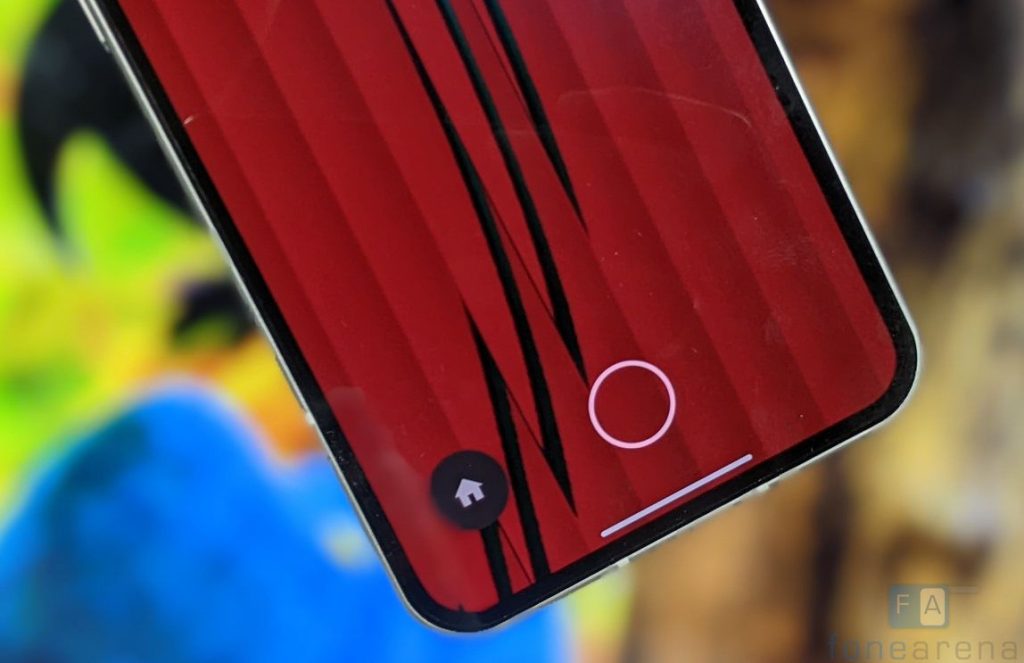 The phone has an optical in-display fingerprint scanner. You can also notice a small bezel below the display, which is uniform on the sides and the top. This looks similar to the iPhone. Even though the bottom bezel is minimal, the side bezels are thicker compared to some mid-range phones.

Coming to the button placements, the power button is present on the right side and the volume rockers are on the left side. The dual SIM slot, primary microphone, USB Type-C port and the loudspeaker grill are on the bottom. The secondary microphone is on the top. Since the sides have a metal frame, you can see the antenna bands, and it doesn’t attract fingerprints.

The phone has an 100% recycled aluminium frame, while over 50% of the phone’s plastic components are made with bio-based or post-consumer recycled materials – an industry-leading percentage, according to Nothing. 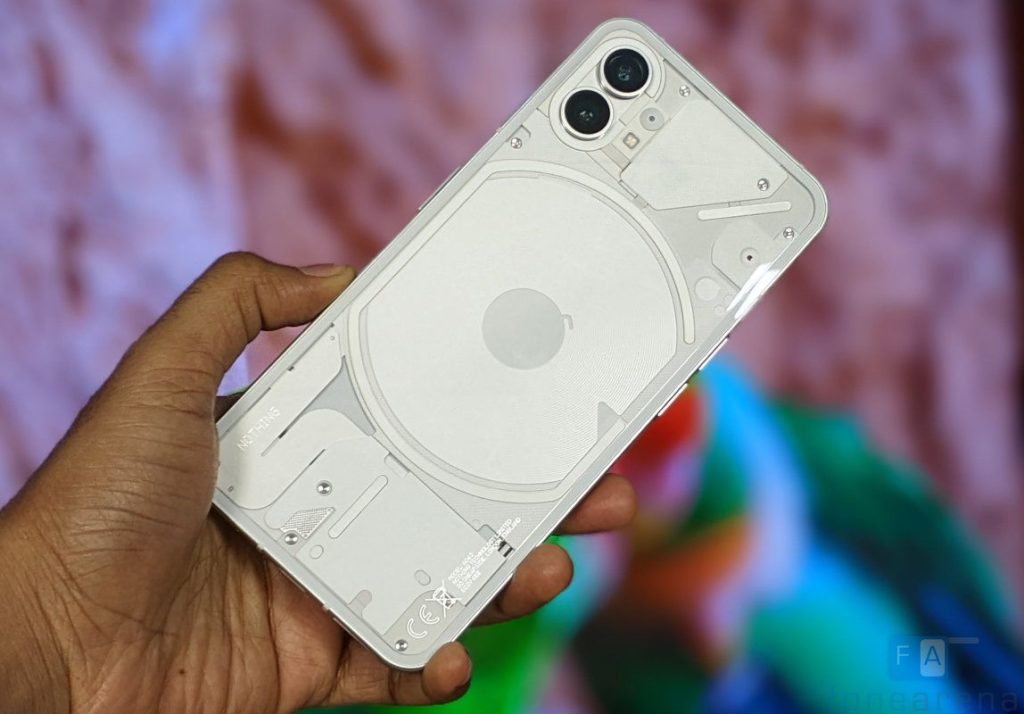 The phone features a transparent back with a unique design composed of over 400 components. It has Corning Gorilla Glass 5 protection on the back as well. Still, I would recommend you to use a case to protect the back. The main highlight of the phone is the Glyph Interface, with Unique light patterns made up of 900 LEDs to indicate who’s calling and signals app notifications, charging status and more. 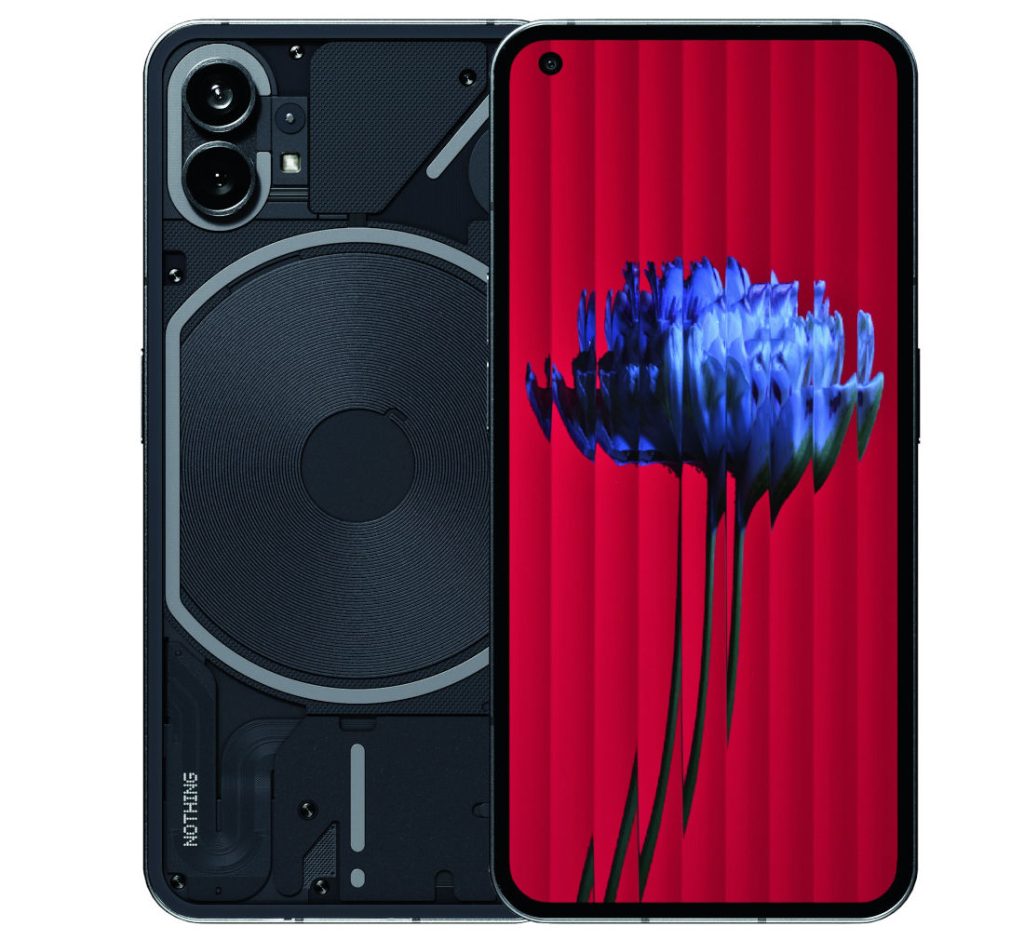 In addition to White, the phone also comes in Black colour, but the rear design is clearly visible only in White colour. The phone is just 8.3mm thick, and weighs 193.5 grams since it has a huge screen, and a glass back even though it packs a 4500mAh battery. The phone has IP53 ratings for splash resistance, so it has mange slight spills or light rain, but you can’t immerse in water. 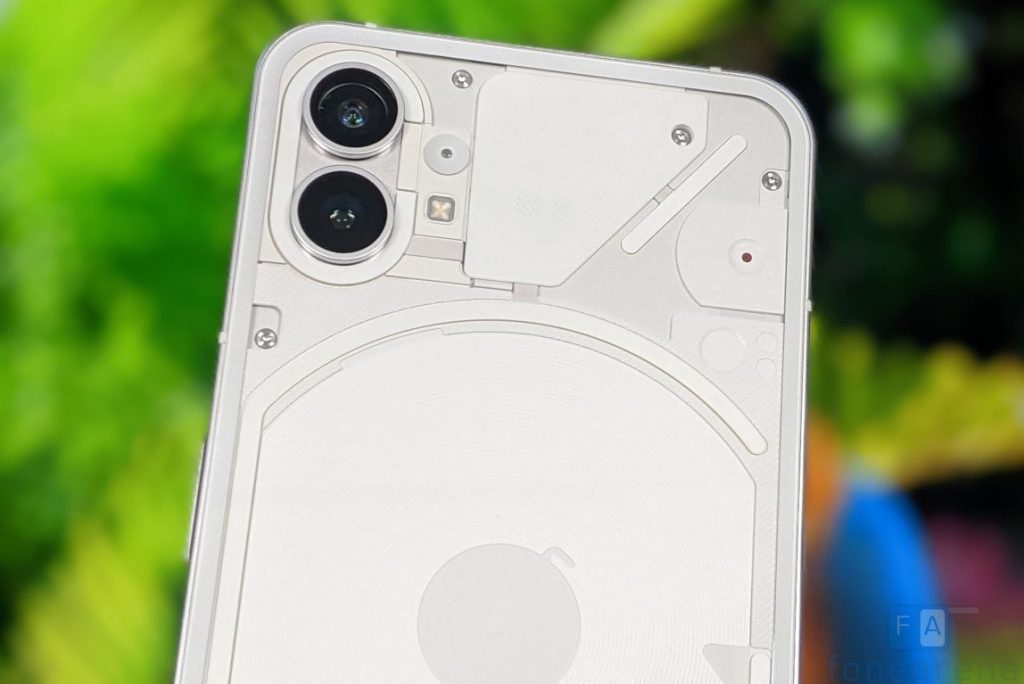 The camera UI is simple with options for Slo-mo, Video, Photo, Portrait and more option that has time-lapse, pano, macro and expert mode. The expert mode is pro mode, which lets you adjust white balance, focus, shutter speed (1/8000s to 32 seconds), ISO (50 to 6400) and option to select main and ultra-wide lens. There is also RAW option.

Coming to the image quality, daylight shots came out well with good dynamic range. After pixel binning technology, you get 12MP output from the main and ultra-wide cameras. HDR shots are better with improved dynamic range. 50MP wide-angle shots are decent, but there is colour difference since the shot looks dull, and the quality is not as good as the main camera. The ultra-wide macro option is good, but you can’t go too close, so  it is better to shoot close up images in 2X. The 16MP front camera is decent, and you get full 16MP output. Edge detection is decent in portrait is decent. Lowlight camera performance is good from the main camera, but the ultra-wide lowlight shots are just average.

It can record videos at 4k resolution at 30 fps and 1080p at 60 fps from both main and ultra-wide cameras. It also has slow motion 1080p at up to 120 fps. OIS in the main camera does its job. Video quality from the main camera is decent, but there is a jelly effect when panning. It’s the same case even in ultra-wide camera. HDR video recording looks good, but it struggles to focus. Hope the company will fix these issues in future updates. Apart from the  LED flash, you can also use the Glyph LED lights for both photos and videos.

Check out the video samples

It runs Android 12 out of the box, with Nothing OS on top. It has May 2022 Android security patch. The company has promised 3 Android OS updates and 4 years of security patches every 2 months. Apart from the fonts and UI, it gives a stock Android experience without any bloatware. There are four Nothing wallpapers, and you can choose the theme colors and change the app style from 4×5 to 5×5.

You can control third party products from Phone (1)’s Quick Settings as easily as Nothing ones, starting with Tesla, but you need to log in in to Tesla account first. You can unlock doors, turn on AC, see miles left and more for Tesla, says the company. More third party brand integrations will be announced soon, said Nothing. There is a NFT widget that shows your NTF collection, when you connect to a wallet.

The Glyph Interface has Unique light patterns made up of 900 LEDs to indicate who’s calling and signals app notifications, charging status and more. You can pair individual contacts to a ringtone, and each with a unique Glyph pattern. You can schedule it to turn on and off automatically.

There is a separate red LED light on the top corner on the back that acts as a recording indicator for videos. If you like to keep the phone face down when you don’t use it, then the Glpyh interface is useful.

Out of 12GB LPDDR5 RAM, you get 11.05GB of usable RAM, and about 5GB of RAM is free when default apps are running in the background. It doesn’t have memory extension or virtual RAM. Out of 256GB, you get about 226GB of free storage. It has UFS 3.1 storage, and we got sequential read speeds of 1873.27MB/s. Apart from the Google apps, it doesn’t have any third-party apps.

The phone has an in-display optical fingerprint sensor which immediately unlocks the phone just by keeping your finger on the sensor. You don’t get any animation options. The phone also has face unlock that can unlock the phone in seconds, but it is not as secure as fingerprint.

YouTube Music is the default music player. It doesn’t have Dolby Atmos or any other custom audio features. Audio through the stereo speakers is good and loud. Audio through the headphones is good as well. This has Widevine L1 so that you can play HD content on Amazon Prime Video, Netflix and other streaming apps. However, you don’t get HDR playback on Netflix.

This is one of the few  phones to be powered by Snapdragon 778G+ 6nm Mobile Platform, with boosted GPU and CPU performance compared to 778G. This has Qualcomm Kryo 670 CPU that brings higher performance up to 2.5 GHz compared to 2.4 GHz in the 778G. There is Adreno 642L GPU, which promises up to 20% faster graphics rendering compared to the previous generation. Other specifications remain the same.

It has  4 x A78-based Kryo 670 Performance CPU clocked at 2.5GHz and 4 x A55-based Kryo 670 Efficiency CPUs clocked at up to 1.80GHz. The Adreno 642L GPU offers a smooth gaming performance even in graphic intensive games. The phone gets a bit warm on intensive gaming or when recording 4K videos for long, but it doesn’t too hot. We did not face any issues or frame drops in the graphic-intensive games like COD, BGMI and Genshin Impact. It reached maximum 40º in our testing indoors in Wi-Fi, but this might vary outdoors in 4G. That said, check out some synthetic benchmark scores below. 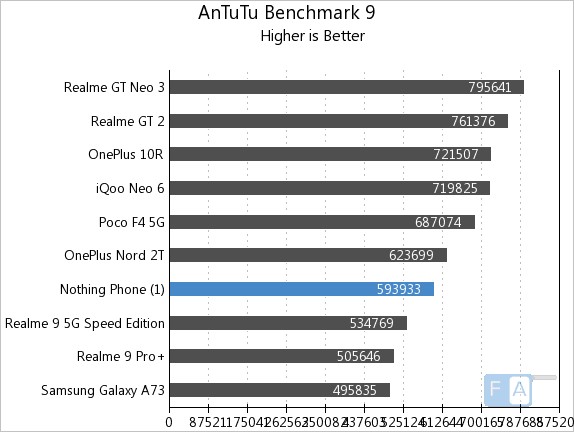 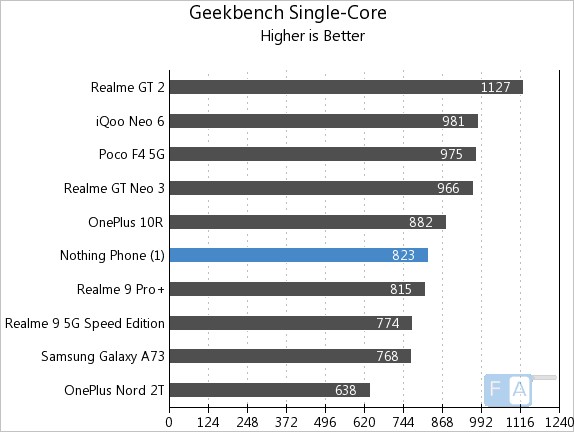 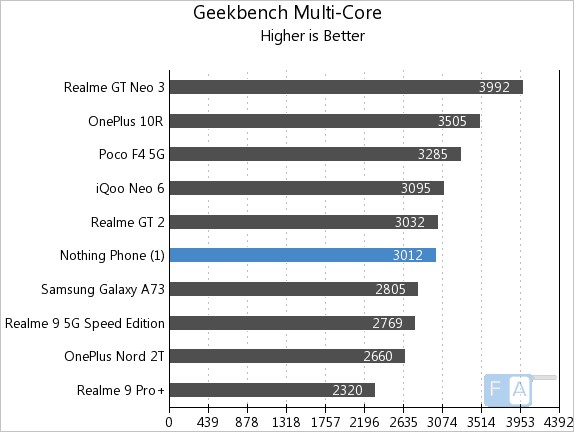 As you can see in the benchmarks, the Nothing Phone (1) powered by the Snapdragon 778G+ chip outperforms 778G-powered phones, but the Snapdragon 870, 888 and the Dimensity 8100 are better.

Coming to the battery life, the phone packs a 4500mAh (typical) built-in battery which might looks small, but it lasts for a day even with heavy use on 4G. With minimal use on Wi-Fi, it should last for 2 days. I got 6 hours of screen on time with over a day of use on Wi-Fi and in 120Hz.

At a starting price of Rs. 32,999, the Nothing Phone (1) is more than the looks. It might not be the value-for-money phone considering the SoC compared to other phones in the range, but support for wireless charging and display are some impressive features. The Glyph interface looks unique and is based on the preference of the user. Even though the main camera is good, the ultra-wide camera and the video needs to be improved in an update.

The iQOO Neo 6 and POCO F4 are good alternatives, if you need a better gaming experience. moto edge 30 has the same SoC, but comes with 144Hz screen and a lighter body since it has a smaller battery.