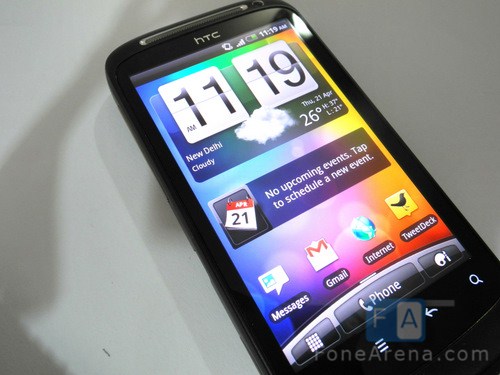 When HTC launched the Desire and the aluminum bodied HTC Legend, it created two of the most popular Android devices in the market. So much so that Google basically took the HTC Desire and named it the Nexus One ie the first Google phone. Fast forward to 2011 and we have the successor to the original Desire ie the Desire S. Is it still as ‘desirable’ as the original? Read on the FoneArena HTC Desire S Review to find out!

Coming from the impeccable construction of the new Nokia devices , I was pleasantly surprised when I first held the HTC Desire S in my hand. The aluminum build feels great in the hand and makes the device quite a looker too. The back of the device is part aluminum and part soft plastic. The split three part design looks nice and actually is useful as the lower plastic panel can be removed to replace the battery , insert SIM card and put in a memory card as well.  Point to be noted is that changing the memory card requires the battery flap to be opened and this will shut off the phone. 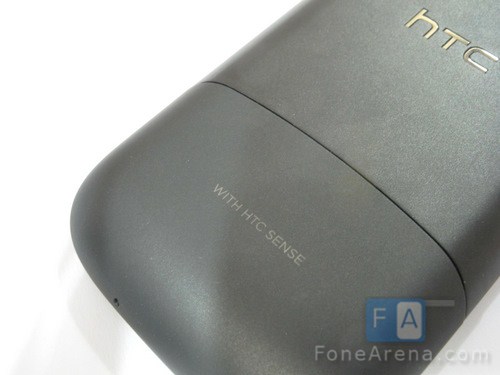 The rear of the phone also sports the 5MP camera along with an LED flash , a speaker grille. The front of the Android smartphone has the 3.7” S-LCD screen , four capacitive buttons , the earpiece grille and a front facing camera. The screen is of the SLCD variety which has excellent contrast levels and looks absolutely delightful. It might not have the absolute black levels of SAMOLED but we didn’t miss that much. On the other hand, sunlight visibility was pretty bad. In comparison to the CBD screen on the Nokia E7, the SLCD fared quite badly and was almost invisible in bright sunlight. This is especially a problem in a country like India and if you spend a fair bit of time outside. The screen is of course covered by the famous Gorilla Glass and remains fairly free of scratches even when placed in a pocket with keys and coins.

The capacitive buttons are a bit of a hit or miss. The buttons work as advertised along with the appropriate haptic feedback but the backlight did play spoil sport a few times. This is obviously a problem if it fails to light up in a dark environment. However the problem didn’t occur enough times to be a major issue and can hopefully be patched up in a future software update.

Moving on to the inner hardware, the Desire S runs on the second generation Snapdragon processor along with the Adreno 205 graphics chipset. While this may sound old in comparison to the dual core monsters out there, trust me when I say that the Desire S is definitely no slouch. 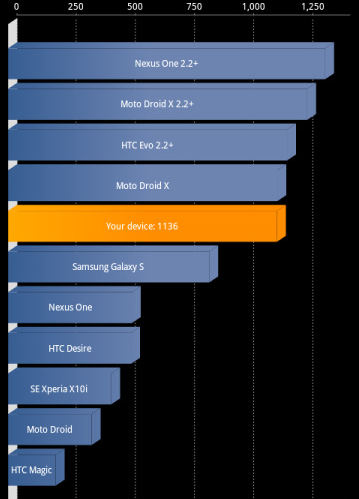 As our benchmark scores will indicate, it ranks high amongst the single core devices out there and shares silicon with the Sony Xperia Play which makes it ripe for that Playstation certified branding which we hope does come to the device. We’d love to play some Final Fantasy VII on this!

15% faster in comparison to the chip in the previous Desire, the RAM has also been bumped up to a generous 768MB which makes the Desire breeze through even the most heavy apps. Sense UI remains extremely slick and smooth even when trying to stress the phone which shows how well optimized it actually is. The 1450mAh battery is fairly adequate when coupled with the Gingerbread OS on the Desire S as the newest version is known to be a bit lighter on the battery. Along with the more frugal Snapdragon chip, the Desire can last a day with moderate levels of usage. With careful battery management and light usage you should be able to get a few days usage without recharging the phone.

One of the things that smartphones are fast replacing is point and shoot cameras. The best camera is the one which you have with you and your phone is always in your hand. Make the cellphone cameras good enough and they can replace the point and shoot. The Nokia N8 has set a bench mark in the category and we expect other manufacturers to step up. Recently in our SE Arc review we noticed how good the camera is, unfortunately the Desire S takes several steps back. 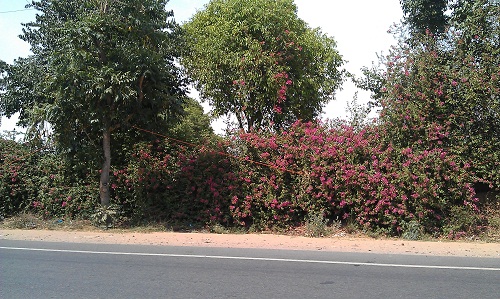 We are not believers of the megapixels game but expect that even if “only” 5MP , the camera should be able to capture quality images. The phone instead captures grainy and often even fuzzy images. On the phones screen or even at web resolutions, the images look decent but look at them full size or try cropping into them and you will notice the constraints of the excessive post processing and the tiny sensor. HTC does add in some fancy filters to fulfill the needs of hipster photography addicts J Even the video which is captured at 720p fails to impress. The camera is one area where HTC needs to seriously improve. To its credit, the camera response is almost instantaneous and the HTC Camera UI layer is nice and easy to work with.

The front facing camera is present for video calling. With Gingerbread 2.3.4 , Google has added video calling support to Gtalk so you should be able to enjoy that on your phone once you get the update. Just don’t expect to take any photos with that camera as in anything other than well-lit conditions you will have to deal with color spots, excessive noise.

Android and Sense UI greet you when you switch on the HTC Desire S. Sense remains the same as you remember it, indeed if there are not many surprises here. HTC has effectively covered the entire Android UI and so you will either like it or you won’t. If you are looking for a native Android experience you might as well start looking at other devices now, HTC has done an expert job with Sense UI and it remains as slick as ever on the new generation silicon. There are quite a few usability improvements in the software package. The lack of the optical trackpad is covered up with the presence of a software tweak that lets you place the cursor in the text with the help of a magnifying glass which pops up. 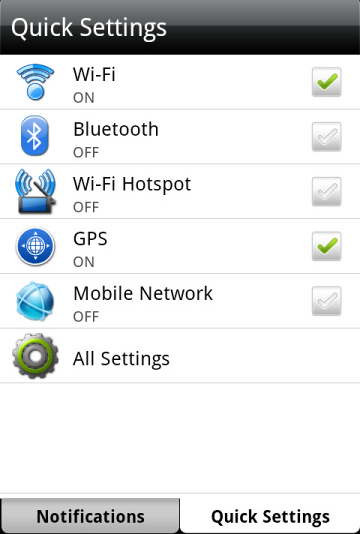 Sense UI also finally incorporates a quick settings tab which makes it infinitely more convenient to change often used settings like Bluetooth, mobile hotspot. Of course you could also use a widget for that but having the option is good.

There has also been a bit of overhauling on the widgets front with the Desire S offering a variant of the well-known HTC Clock which eschews the weather aspect of the clock and puts in a social feed option. It works like you would expect it to, pulling in your Facebook and Twitter updates. Like always, you get seven home screens to fill up as you wish with the first capacitive button working to give you an overview of all the screens at once. 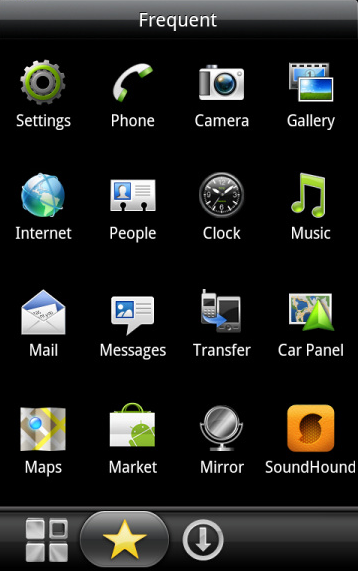 A newer method of app sorting is also included with Sense UI. The layer now allows you to also sort apps by downloaded and recently used. The menu drawers are paginated and not free flowing which became a bit of a chore when trying to scroll down to an app placed lower in the menu.

Overall , it is a nice and smooth UI layer which is now beginning to show its age. We really do wish that Sense UI 3.0 shown off on the Sensation would also come to the Desire S.

Web browsing remains excellent as is seen on Android devices. Provide it with a sufficiently fast data source and the Desire S will churn through web pages. Flash 10.2 was on the sluggish side with the phone struggling to play back 720p Youtube content. 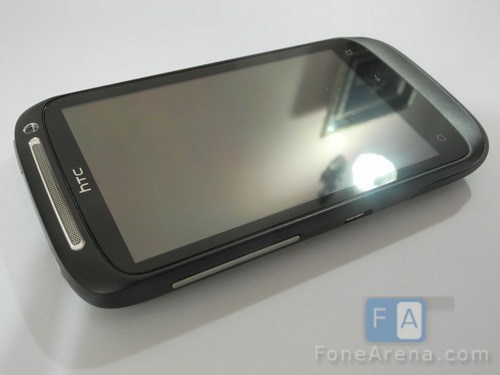 The Desire S is a well-designed piece of kit and can be easily recommended to anyone looking for a midrange Android device. It is easy to work with even for users new to the Android OS. Major improvements in battery life, better construction and software enhancements also make it a possible contender for people looking to upgrade from the original Desire. Long term viability of said purchase is questionable due to the incoming onslaught of dualcore devices and the increasing number of applications which make use of the extra power available to them.