The worldwide smartphone market shipped 329 million units in the second quarter of 2021, resulting in a 19% YoY growth but 7% QoQ decline. The top 5 smartphone manufacturers during the quarter were Samsung, Xiaomi, Apple, OPPO and Vivo.

Maintaining its lead, Samsung shipped 58 million units during Q2 2021 with a 7% YoY growth, however its market share reduced to 18% in the quarter. In second place was Xiaomi, who recorded a strong 98% YoY growth thanks to strong demand for Redmi 9, Note 9 and Note 10 series smartphones. The company shipped about 53 million units in the quarter, and it earned their highest ever revenue in the quarter too.

Apple had an incredible quarter despite facing supply chain issues, shipping about 48.9 million units and recording 30% YoY growth. The company had the highest share when it came to revenue, with 41% of the revenue share, thanks to its higher than usual demand for the iPhone 12 Pro series. 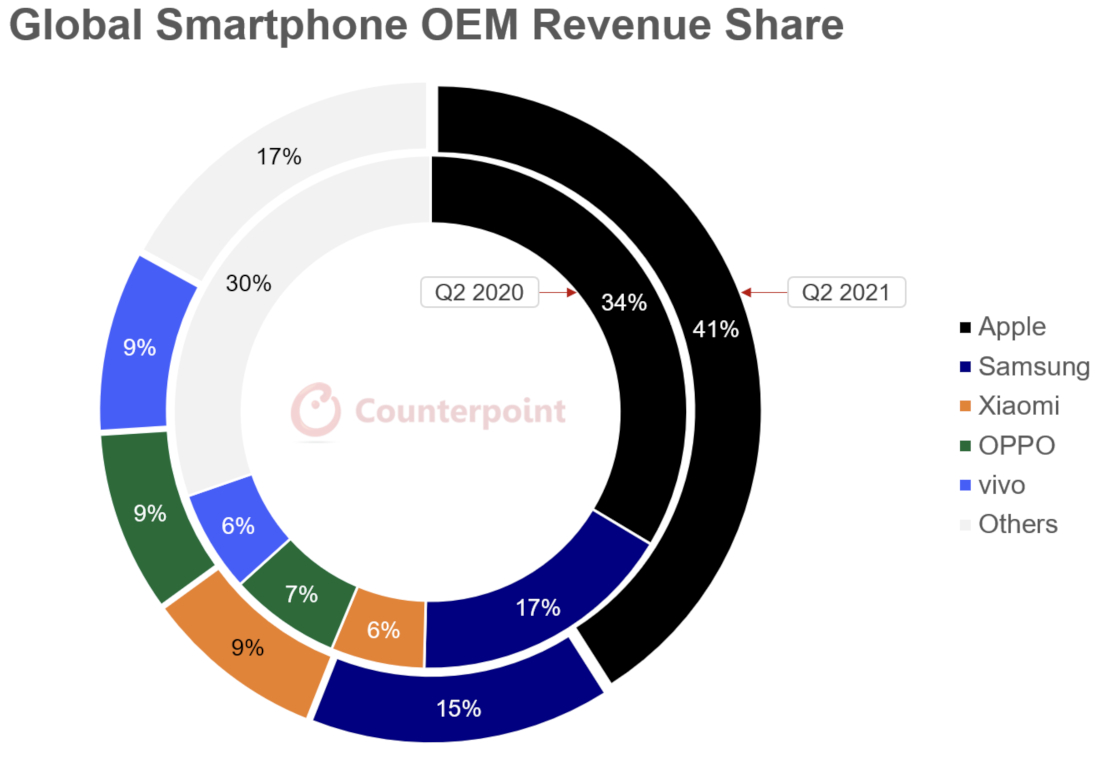 While Samsung retained the top spot, its market share fell by over 3% to 18% in Q2 2021. Shipments were down due to weak seasonal demand in some of its key regions such as India, Central and Latin America and Southeast Asia followed by production disruption in Vietnam due to COVID-19. Xiaomi had its best-ever quarter as it was able to increase its market share in China, Southeast Asia and Europe. While Apple fell to the third spot, it captured record second-quarter shipments thanks to persistent demand and supply for its iPhone 12 series. OPPO and vivo retained their spots in the top five as OPPO continued expanding to overseas markets and vivo managed to lead the China market for the second quarter in a row.

The OnePlus 9 series marked a key milestone in our journey towards bringing a holistic flagship experience in a complete and truly premium package, but at a competitive price point. We are consistently working towards raising the bar for flagships and leading the charge in developing best-in-class devices. Our recent partnership with Hasselblad on strengthening the camera technology have led us to push the boundaries of innovation. And it has been extremely well received. This achievement stands as a testament to our commitment towards the excellent technology that we present to our user community. We are thankful to our Indian consumers for their trust and are further driven to create products that personify our ‘Never Settle’ approach.