Vi (Vodafone Idea Limited) has announced Unlimited high-speed Night-time Data for its prepaid customers from 12:00 am to 6:00 am on all Vi Unlimited Recharges of Rs. 249 and above. However, the company announced that the benefit is only applicable for recharges done on or after 16th Feb 2021 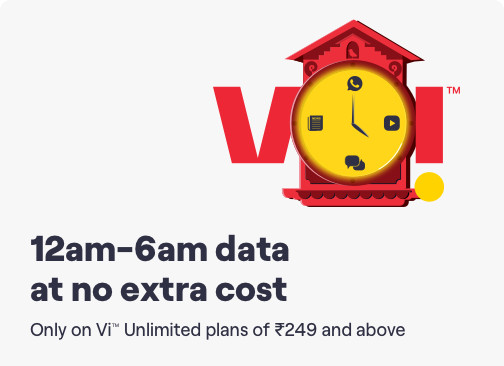 This move follows as the night binging on the Internet and OTT is on the rise due to remote working and other factors, claims the company.

“The Unlimited high-speed Night-time Data can be used by Vi customers to browse and download a variety of content from various OTT applications, as well as Vi Movies and TV App,” says Vi.

The company says that the new initiative is aimed at increasing stickiness to the network and attracting new users to our network. Notably, the recently announced night-time unlimited mobile data will be in addition to the weekend data-roll over the facility.

According to the Vodafone Idea, consumption patterns of consumer segments such as the Youth, indicate higher data consumption during the night.

Back in October last year, Vi launched an Rs.351 pre-paid pack that offers 100 GB of 4G data with no daily limits and days validity, targeting students, work from home professionals, cricket lovers, as well as gaming enthusiasts. On the other hand, Vi has also announced the launch of GIGAnet, which it said is India’s strongest 4G network.