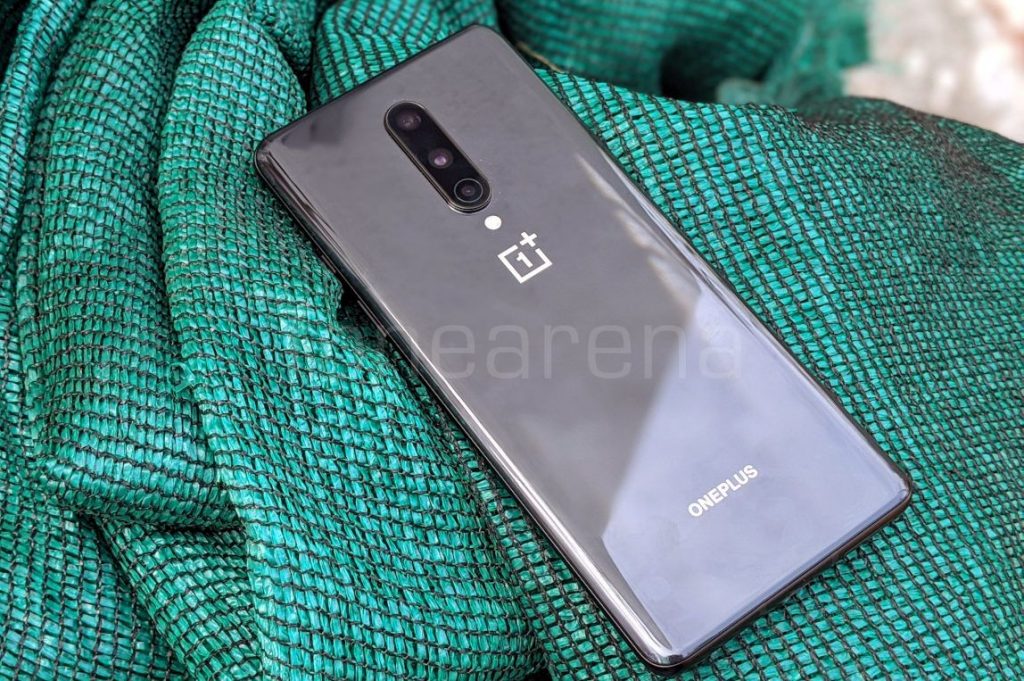 Known for launching killer flagships, the OnePlus 8 series smartphones raised quite a few eyebrows! Initially, OnePlus positioned itself as the go-to player in the value flagship segment, but now, they are foraying into the true flagship segment competing against Samsung and of course their ideology too.

While the expensive device from OnePlus – 8 Pro doesn’t compromise on any features, the OnePlus 8 lacks some capabilities, but it still aims to offer one of the best Android experiences. Are those trade-offs worth the asking price? Should I buy OnePlus 7T instead? What’s the difference between OnePlus 7T and 8? Below, we have mentioned the reason on why you should and should not buy OnePlus 8.

Why you should buy OnePlus 8

Design and build quality – No compromise!

Following OnePlus over the years, I can safely say that they don’t compromise on build quality (hope they keep this up in rumored-OnePlus Z) The perfect example at this point is OnePlus 8. At 180 grams, the device is absolutely lightweight and feels compact (compared to other 6.5-inch smartphones at present). The Oneplus 8 comes with glass build on both front and back with aluminum frames on sides with Matt finish. With 8 mm thickness, the device feels really sturdy and well-built. I personally prefer lnterstellar Glow, but we got the Onyx Black color variant. 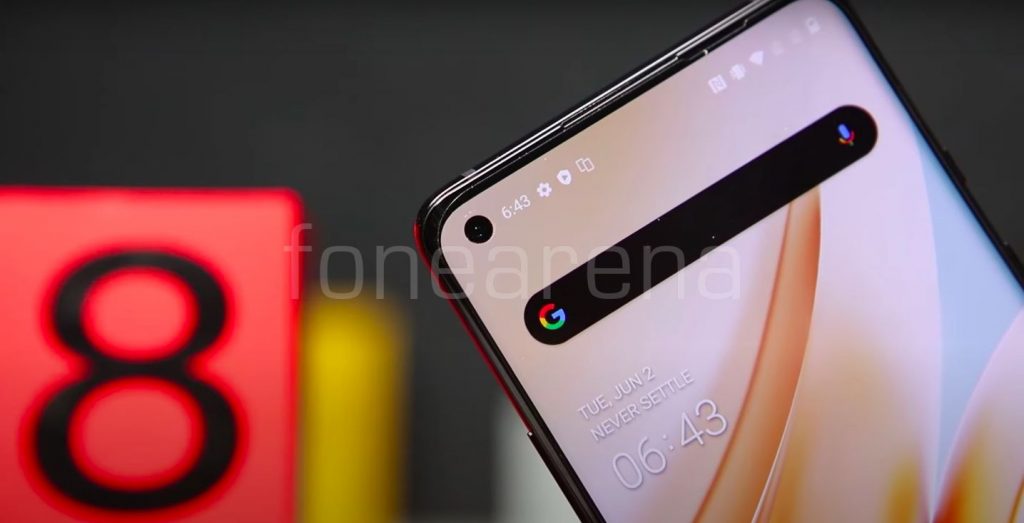 On to the design, the round camera module from the 7T has been replaced by a vertical module similar to 7 Pro and 7T Pro. This time OnePlus ditched notch for the punch-hole for the front-facing camera. Also, the famous alert slider is protruded a bit outside comparatively. The button’s feedback is on point. Overall, OnePlus hasn’t done much on the design (except few refining) and feels familiar to its predecessor.

Moving on, OnePlus has been strange about its IP certification, but this time, it’s weirder. The standard OnePlus 8 doesn’t come with official IP68 certification, whereas the carrier version from Verizon or T-Mobile has the certification. However, the company claims that you’ll be able to use them out in the rain still (don’t try this at home). 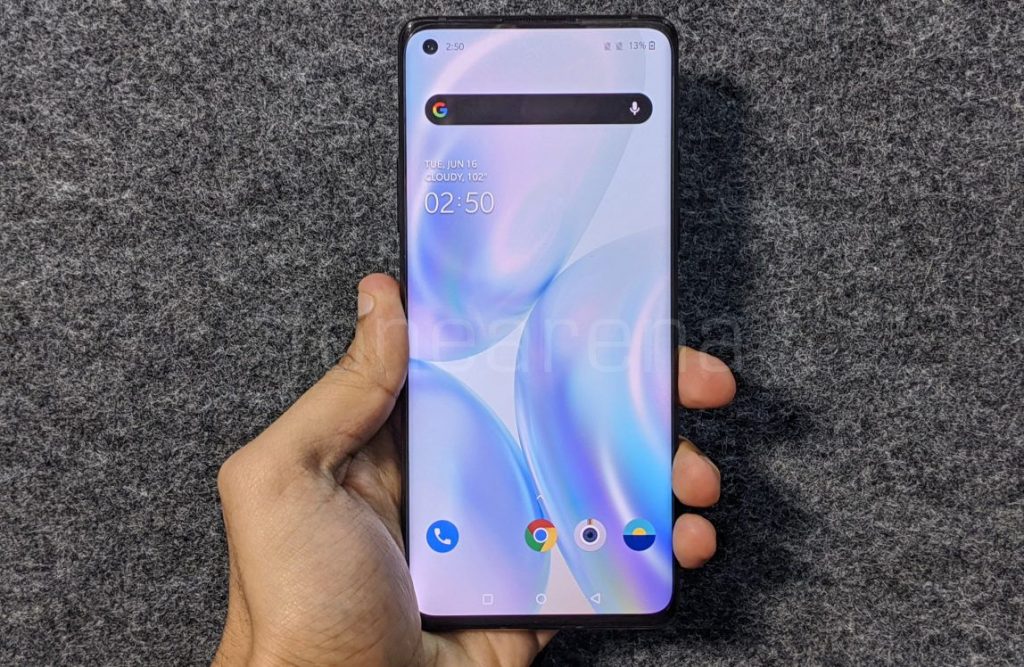 The OnePlus 8 sports a similar 6.55-inch (2400 x 1080 pixels) Full HD+ 20:9 aspect ratio Fluid AMOLED display with 90Hz refresh rate as the OnePlus 7T. But the screen to body ratio is pushed a bit on the OnePlus 8 to 88.7% to create a bezel-less impression, compared to 7T’s 86.5%. Another difference is the punch-hole instead of a notch. The display is protected by 3D Corning Gorilla Glass. The ‘Fluid AMOLED’ display, as OnePlus labels it, is purely due to the 90Hz refresh rate that it supports. It supports HDR10+ sRGB color gamut and DCI-P3 color gamut.

Like any other OnePlus device, the Oneplus 8 is no slouch when it comes to display. The colors are vibrant, blacks are deep, have a very good peak brightness at 1100 nits (so you will be fine under direct sunlight) and the content consumption are excellent, thanks to dual firing speakers. Also, it doesn’t have curved edges as much as the screen on OnePlus 8 Pro, which means lesser accidental touch problems. 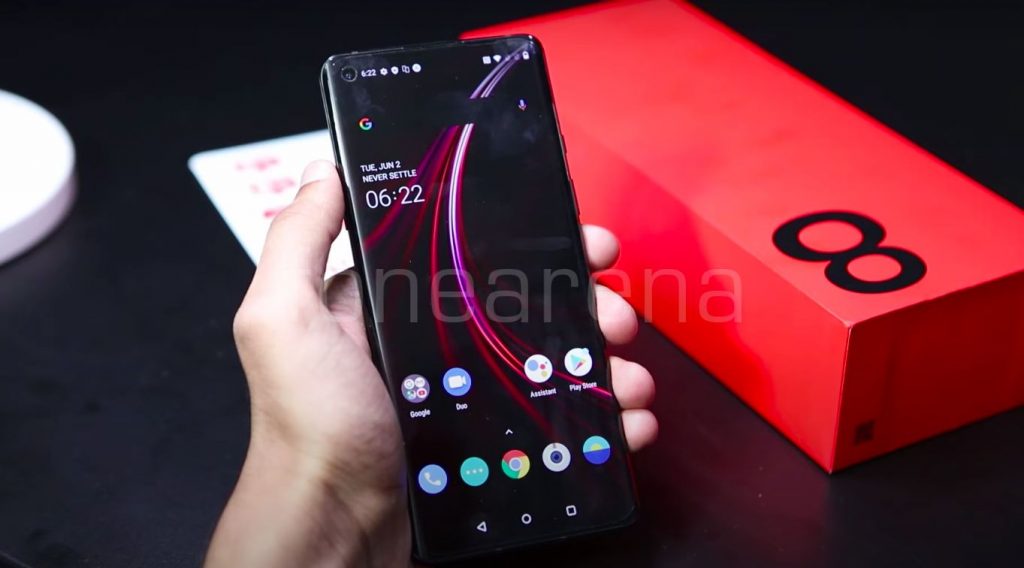 As we are in the middle of 2020, I can safely say that high-refresh-rate displays are essential characteristics of flagship smartphones this year. At 90Hz, the OnePlus 8 feels smoother and faster while scrolling through my social media feeds and paging through home screen felts snappier. However, the battery drains a bit faster if you use it on 90Hz all the time.

So you have the option either to choose 60Hz or 90Hz. There are options to calibrate the screen with three options – Vivid, Natural, and Advanced. In case, if you read a lot on-the-go, Reading Mode – Chromatic effect and Mono effect, serve you the best. Unlike its predecessor, we also have a ‘punch-hole’ hiding option, which was last seen on OnePlus 7. OnePlus has added a gimmicky feature in the device – “Vibrant Color Effect”, which punches up the colors upon enabling. One of the best parts of Android 10 is its Gestures and Navigation, and this slightly curved screen makes it more enjoyable. 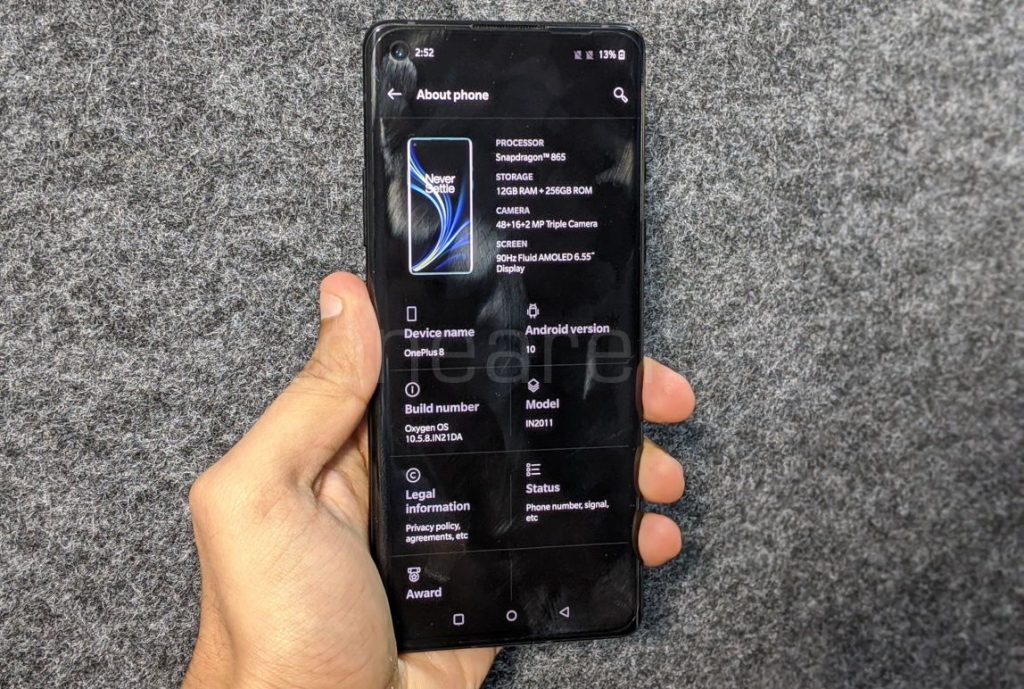 The OnePlus 8 is shipped with Android 10 with OxygenOS 10.0 out of the box. OxygenOS is enough to keep me glued to OnePlus devices, no matter the compromises. Except for two to three additional features, there aren’t any major changes in the new iteration of OxygenOS. It’s worth mentioning that those features might end up in previous OnePlus devices in the future. Till now, we didn’t get Always-On display, but the company has promised to bring it with a future update, till then Ambient display is a perfect second option.

Coming to the customisation options, there are options to change accent colors, shapes of quick toggles, font styles, and icon packs. Other useful features include double tap to lock, and Launcher layout (where you can select Homescreen with App drawer or just the home screen that accommodates all apps). And there is a ‘Left most screen’ option, where you can choose to have Google news feed or OnePlus Shelf.

The Live Caption feature detects speech in media and automatically generates caption. Right now it works well with English content, and we can expect it in other languages soon. As per the company claims this feature uses additional battery. Also, there are ways to move around and expand the caption. The Live Caption can be turned on and off through volume rockers as well. The Dolby Atmos offer three scenario-based enhancement – Dynamic, Movie, Music. It also has separate “Earphone Adjustment”, where you can play with equaliser and audio styles.

Yet another new feature here is “Optimized charging” where it optimises charging patterns according to your usage habits to reduce battery load and extend battery life. There is an “Enable dark tone in more apps” in the OnePlus Laboratory. It enforces the dark mode in third-party apps that don’t support it. However, the feature is still experimental so some apps may not work properly.

With OnePlus 8 Series, there is an option to select the function of power keys – Power menu or Voice Assistant. There is a “Work-Life Balance” feature that categorises the notification you’d want to be notified by. This feature can be enabled with apps, Wi-Fi networks, location, and timings too.

The OnePlus 8 is powered by the latest Octa-Core Qualcomm Snapdragon 865 7nm Mobile Platform with Adreno 650 GPU under the hood. This chipset support 5G and has a dedicated X55 modem.

The OnePlus 8 is incredibly fast and continues to do what it is best at. In our experience, we experienced zero lag, zero hitches, and it’s just pure speed and raw power. The read/write speed is more rapid, with UFS 3.0 storage. 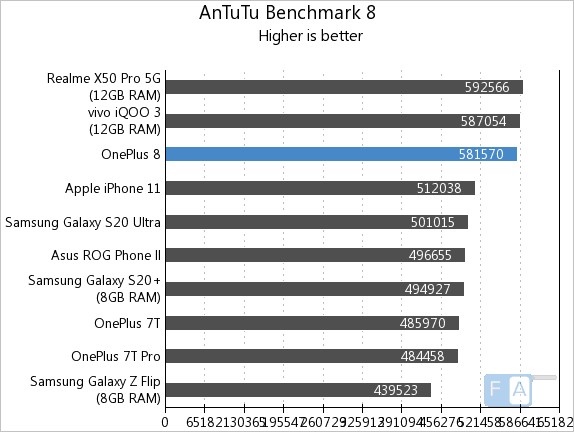 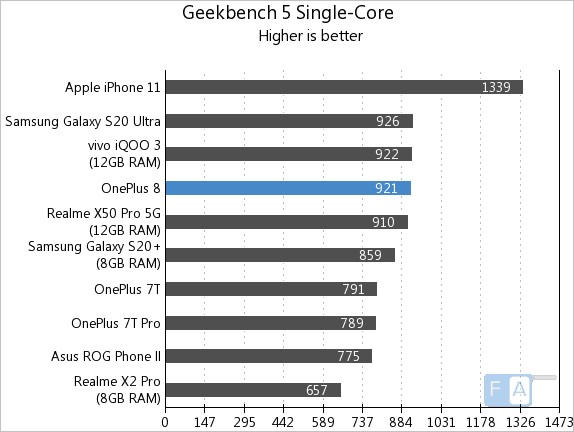 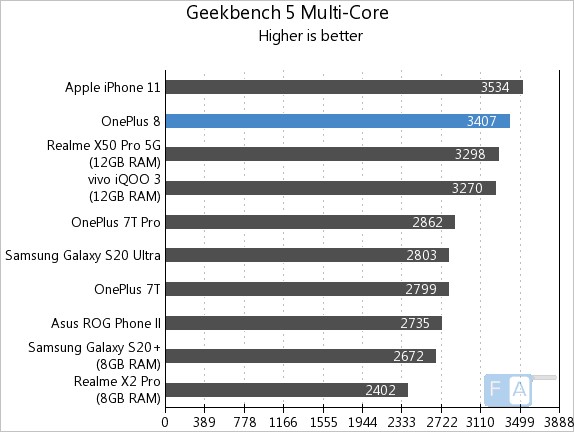 On the multimedia front, the OnePlus 8 comes with the stereo speakers with the primary loudspeaker facing downwards and the secondary speaker doubles as the earpiece. It supports Dolby Atmos certification as well. The audio output across all the levels are enjoyable without much distortion at the higher volumes. The sound quality through headphones comes out neat without any complaints.

The OnePlus 8 is powered by a bigger 4300mAh battery with Warp Charge 30T Fast Charging (5V/6A). The company has bumped an extra 500mAh, considering the apparent reasons — Fluid AMOLED display, 90Hz refresh rate, and apparently the feedback of average battery life from 7T users. Does a bigger battery always result in better battery life? Might or might not! And this case, it worked for OnePlus. The battery life is comparatively good than the OnePlus 7T.

On a casual usage, we got around 6 to 6:15 hours of screen on time on 90Hz. But falls considerably on heavy usage. Switching back to 60Hz gives you extra battery life!

In general, the Warp Charge 30T charges the device quickly, and that sort of makeup for the fact that it doesn’t have the convenience of wireless charging. But if you have used 65W previously, charging 100% around 1 hour could feel like an eternity for you. 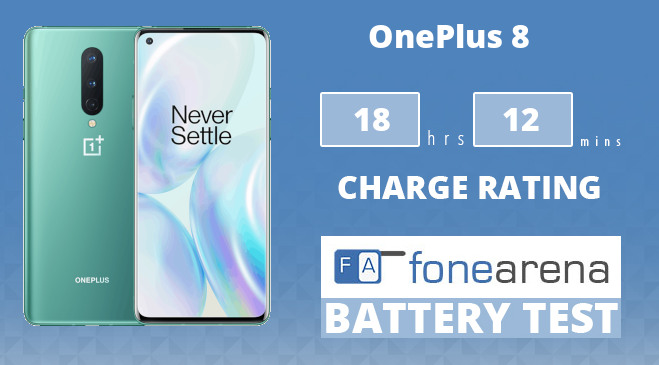 It achieved One Charge Rating of 18 hours and 12 minutes, which is slightly better than the OnePlus 7T since it has a slightly bigger battery. This is in 60Hz refresh rate, so it should be less in 120Hz. It can charge from 0 to 50% in around 20 minutes and 70% at 30 minutes. It took just about hour to charge to 100% using the bundled 30W charger.

Why you should not buy OnePlus 8

Camera – Not up to the mark!

The OnePlus 8 comes with a triple camera setup 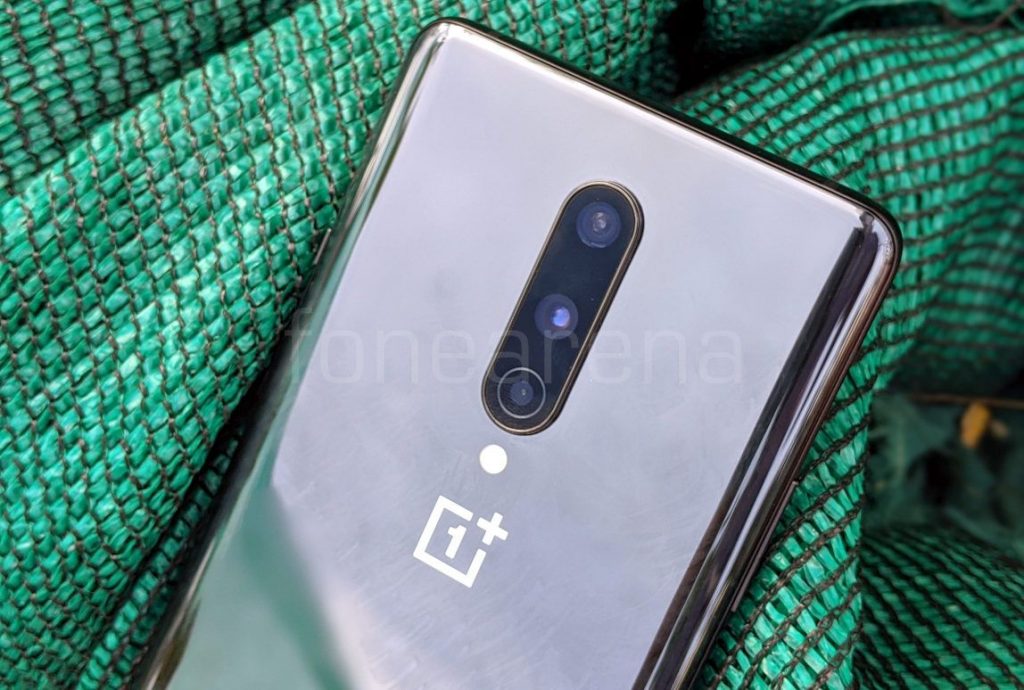 With OnePlus 8, the company has swapped the telephoto lens for a dedicated macro one. We prefer the camera setup of 7T over this! The ‘Settings’ option is now at the right top, whereas previously you have to swipe up. Right now, you also have the option to change to choose to shoot in 12MP, 48MP.

Talking about the usage, the primary camera captures very good photos with fine details. Most of the time, pictures churned out from the main sensors were sharp, had good colors and accurate exposure. The wide-angle camera also performs as expected. Portrait mode works well. The 2MP macro, in our experience, wasn’t great after all. Half of the time, we had focus issues, details aren’t that impressive. We liked the setup more on 7T than this cheap 2MP sensor. Since it doesn’t have a dedicated optical zoom sensor, anything beyond 2X produces noise and not recommendable.

Coming to the low-light condition, the OnePlus 8 camera produces images that are brighter than reality even without Nightscape mode. But the half of the details are not retained. Enabling the Nightscape brings details from shadows and offers the right amount of sharpness as well. Overall the difference is very minimal when it comes between a regular photo and with Nightscape.

The front camera produces some decent images in the daylight, portrait works well with right edge detection half of the times, exceptions are there though. Under low-light, the performance of the camera is purely average and it depends upon the light too.

In terms of videography, the 4K offers a good, stabilised output with good color retention. There are options to switch between the main camera and wide-angel in between video, but it works only up to 4K 30 FPS.

Are we satisfied with the camera performance? Not really! It’s predecessor OnePlus 7T performed way better than this at a lower cost.

Overall, the camera capability of OnePlus 8 is good, but not great!

The exclusion of a few features and some cost-cutting strategy has put OnePlus 8 closer or even equal to OnePlus 7T. In terms of specifications, the display, primary & secondary camera are same in both the device. Also, the 7T’s successor comes with a 2MP Macro instead of 12MP telephoto.

While the OnePlus 8 offers upgrades on SoC, battery, the OnePlus 7T offers the same experience (above mentioned Pro’s) with very few exceptions including display aspect ratio, 5G (futureproof if you don’t change the phone for 4 years) and latest SD865 SoC, at Rs. 7000 lesser. Apart from the Indian exclusive variant (6GB+128GB), other variants don’t offer ‘Bang-for-buck’ value.

The OnePlus 8 supports connectivity options including 5G SA/NSA, Dual 4G VoLTE, Wi-Fi 6 802.11 ax 2X2 MIMO, Bluetooth 5.1, GPS (L1+L5 Dual Band) + GLONASS, USB Type-C. The in-display scanner is snappy and fast, one of the best in the market at present. The call quality over earpiece and headphones is excellent as well.

At this price point, OnePlus 8 is surrounded by numerous power-packed competitors including its siblings. Since we are not fully satisfied with the device at this price range, here’re some of our recommendations:

It is currently being sold in flash sale twice a week on Amazon.in and oneplus.in and has company said that it is aiming to start a consistent supply of stock soon, so it should be available soon across OnePlus Experience Stores and other offline touchpoints soon.