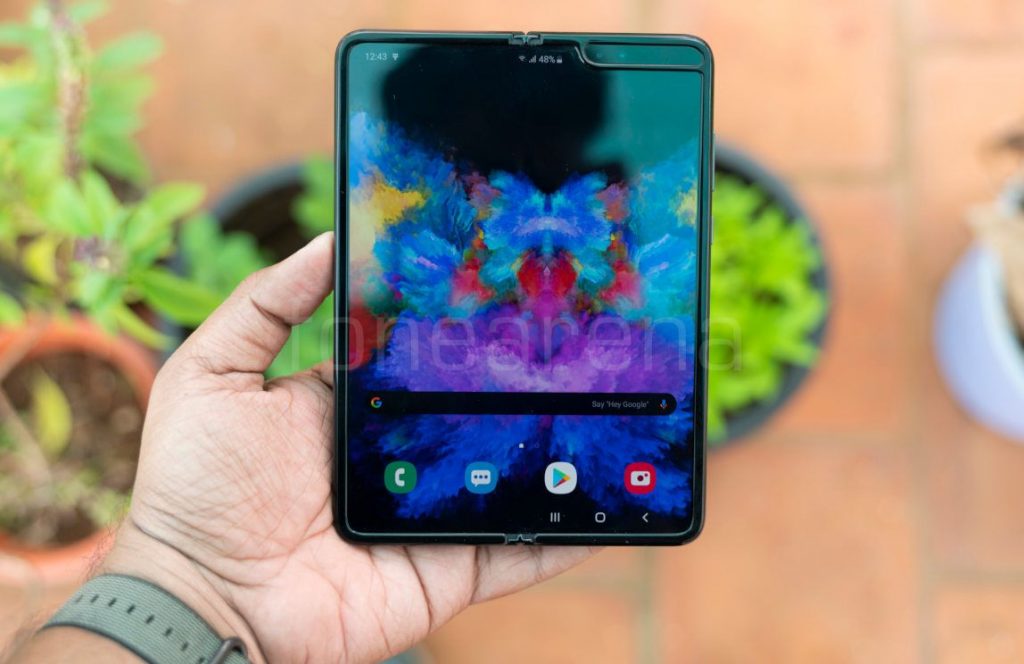 Samsung launched the Galaxy Fold, the company’s first foldable smartphone in India last month. This has two displays, one on the outside and an Infinity Flex Display on the inside. The phone also has six cameras, three on the back, two inside and one on the outside. We got to check out the phone, here we have the unboxing and the first impressions. 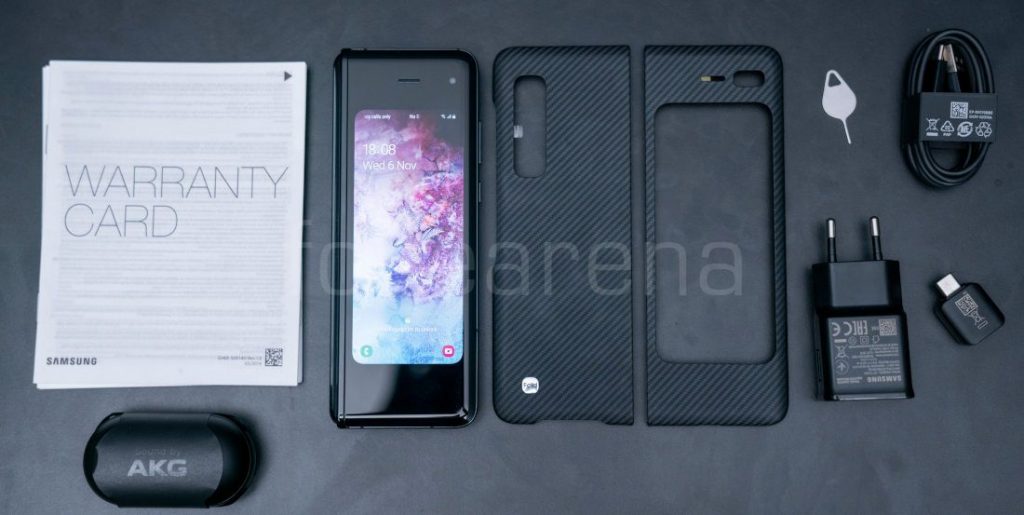 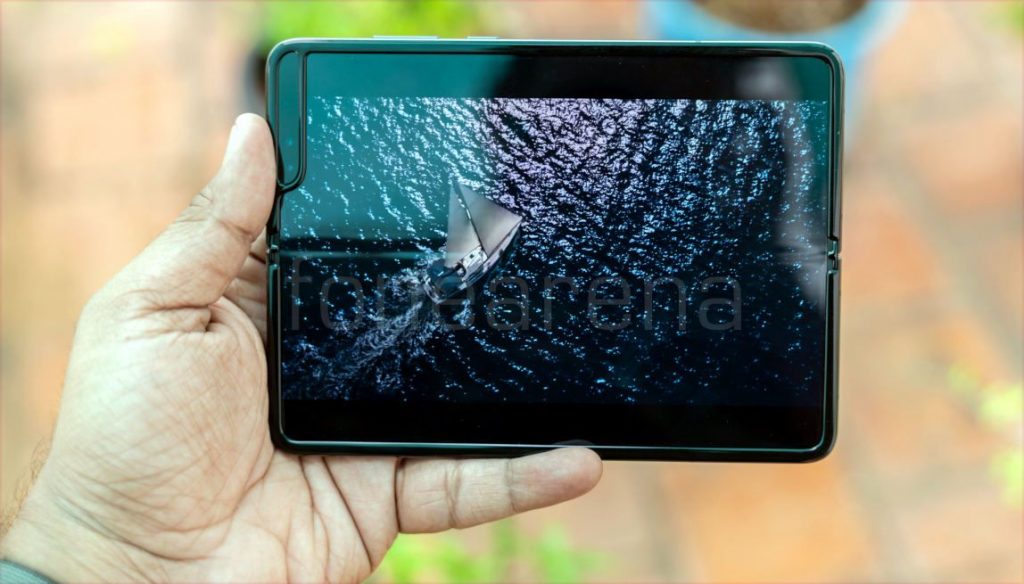 The Galaxy Fold has a 7.3-inch QXGA+ Dynamic AMOLED 4.2:3 aspect ratio main display with a resolution of 2152 x 1536 pixels and a pixel density of 362 PPI. Since it is a 4:3 aspect ratio display, you get black bars when watching videos, and you can’t pinch to zoom to fill the screen since most videos are in 16:9 aspect ratio. The phone also supports HDR on YouTube and other apps like Netflix. The top protective layer of the Infinity Flex Display has been extended beyond the bezel, making it apparent that it is an integral part of the display structure and not meant to be removed, which is a design change after issues in the early design. 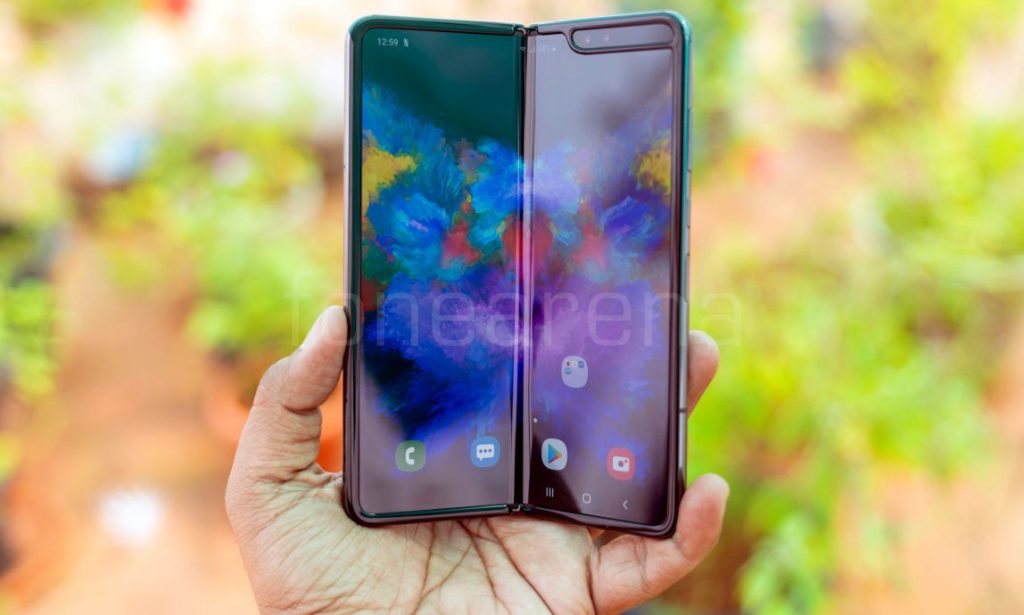 You can see the crease in the middle when you fold. It is not visible when you open, but you can feel it in your hand, which is awkward. It takes some time to switch from front and foldable screen. Most of the latest apps and games work in both the screen, however old games like Asphalt 8 didn’t work in the large screen.

On the top, inside the cut out there are 10MP Dual Pixel front-facing camera with 80° wide-angle lens, f/1.9 aperture along with a secondary 8MP depth sensor with f/2.2 aperture and 90° wide-angle lens. You can see the crease clearly in the second image, and there are protection caps on the top and bottom of the hinge area with the new design.

On the right side you can find the volume rockers, power button and a fingerprint scanner, which is quick to unlock the phone. On the other side there is a SIM slot that accepts single nano SIM. Since this has a foldable design, it is 15.7-17.1mm thick when folded and weighs 276 grams, so it feels a bit bulky in your pocket. 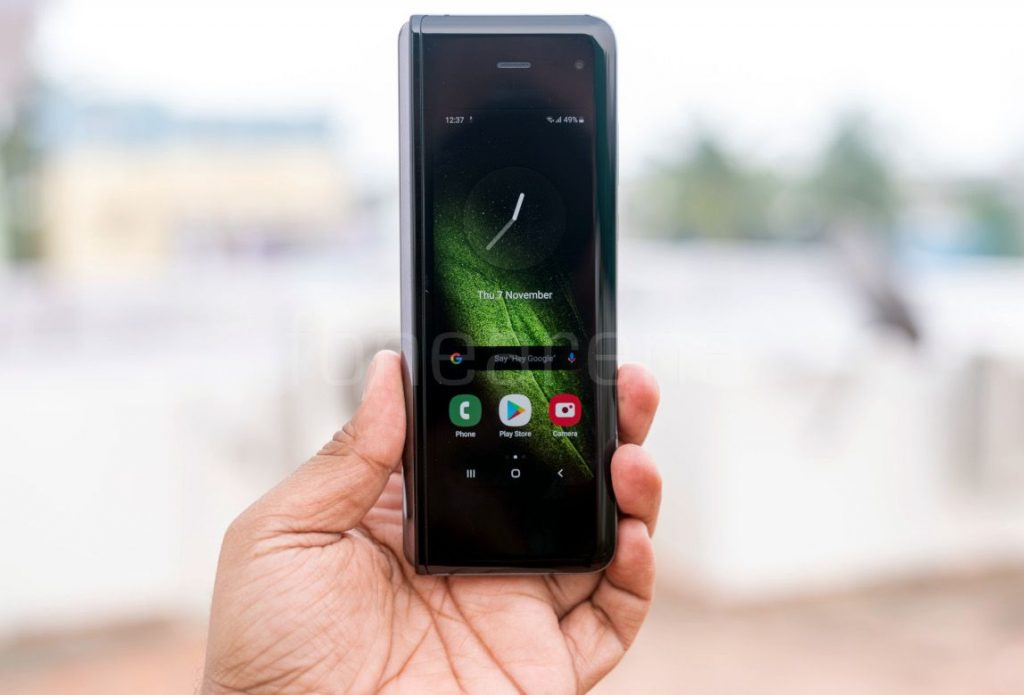 On the outside there is a 4.6-inch HD+ Super AMOLED 21:9 aspect ratio  display with a pixel resolution of 720 x 1680 pixels and a pixel density of 397 PPI. Even though the screen is small, it is good to use for most case. There is also an earpiece, usual set of proximity and ambient light sensors and a 10MP camera with f/2.2 aperture to capture quick selfies. 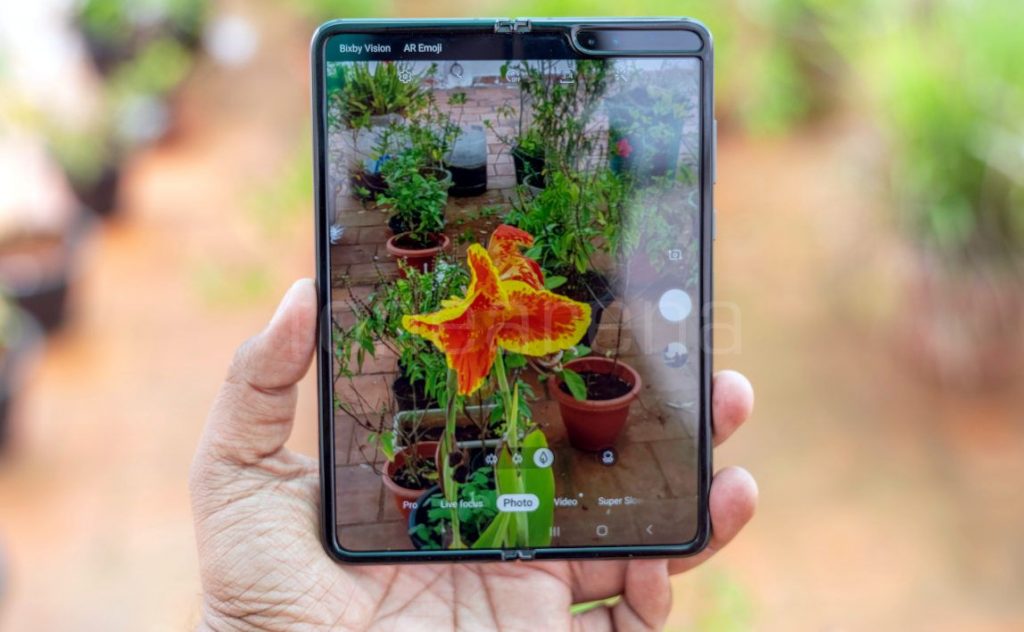 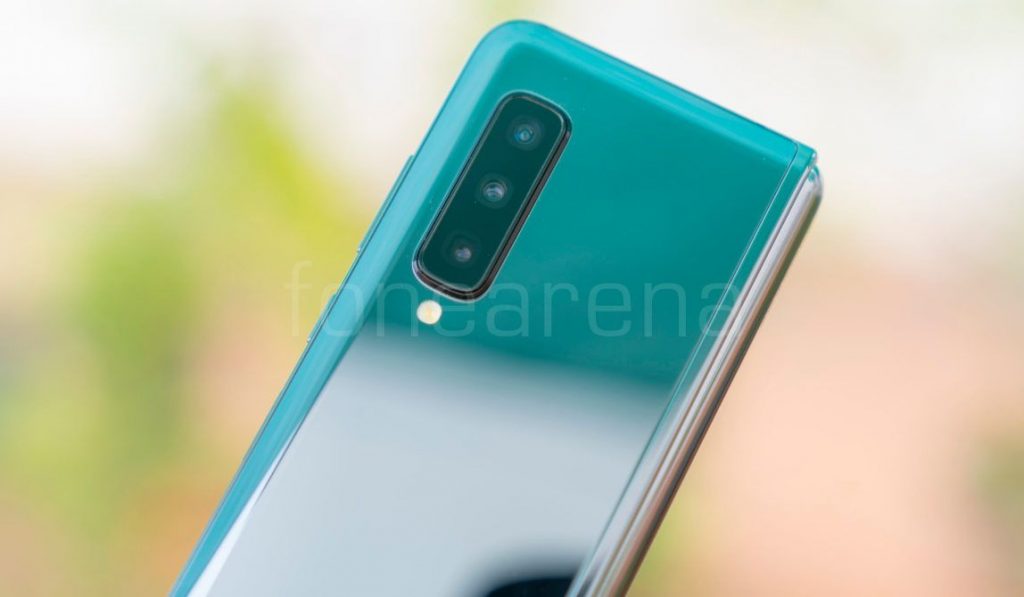 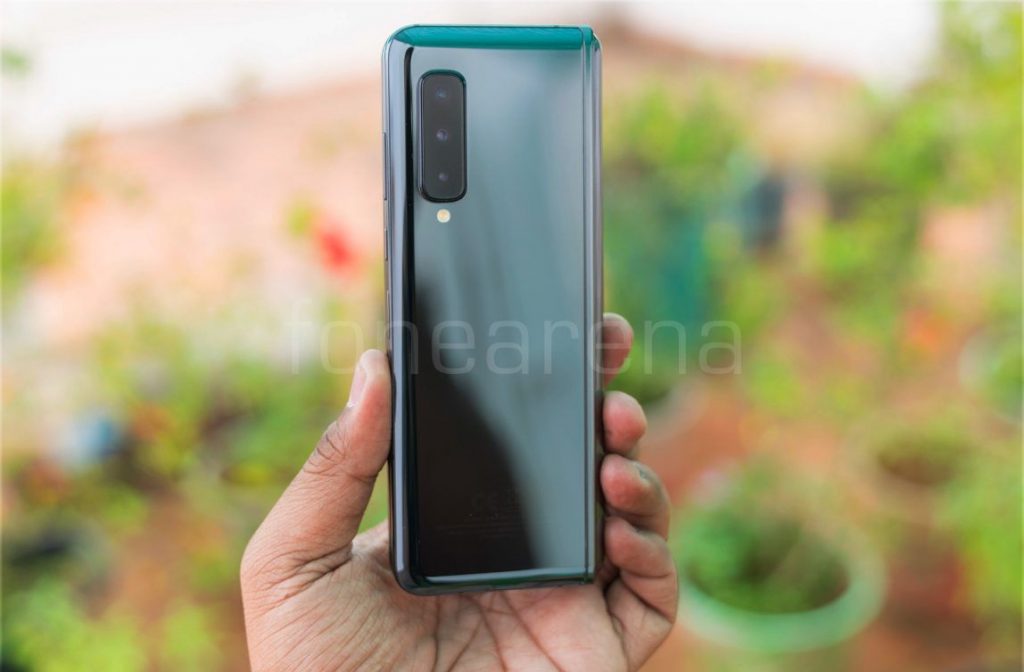 The phone has a glass back which attracts fingerprints easily, so it is recommended to use the cover bundled with the phone. 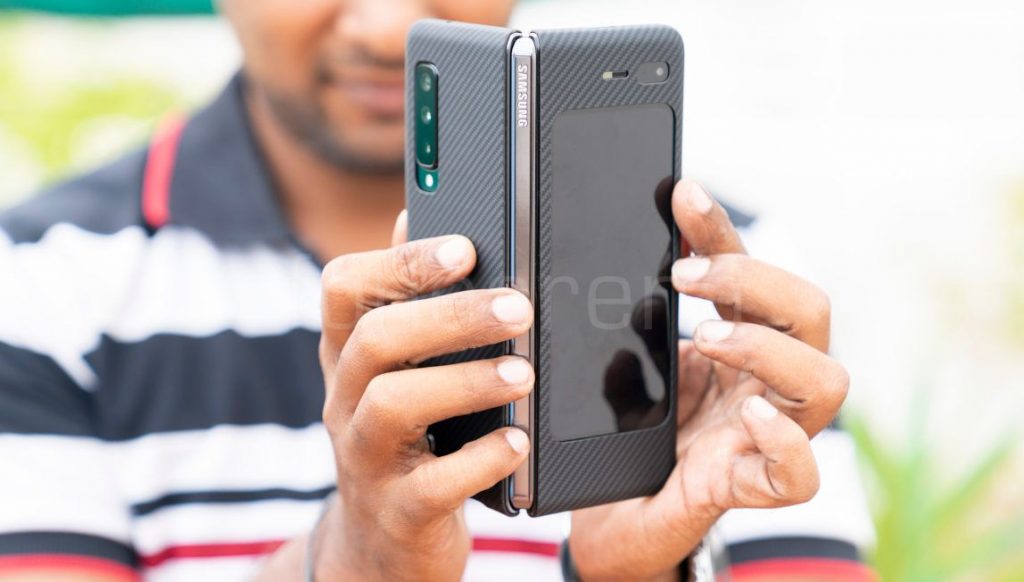 The front screen turns off when you open the phone. On the hinge there is a Samsung logo engraving. It has two batteries for a total of 4,380mAh battery and comes with support for wired and wireless fast charging. Even though it is sold with 5G in the countries where 5G is available, India only has the 4G version.

The Samsung Galaxy Fold comes in Cosmos Black color, is priced at Rs. 1,64,999 and is available from Samsung’s official online store, Samsung Shop, and offline in 35 cities across select 315 outlets, including the iconic Samsung Opera House in Bengaluru.