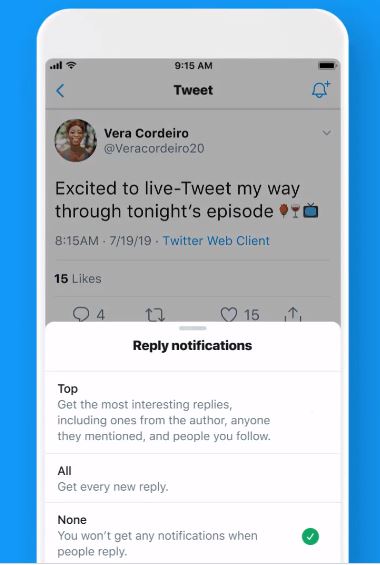 Twitter has announced that the company is testing the ability to get notifications for tweet replies on iOS and Android and this joins Twitter’s testing of ‘subscribe to conversation’, ‘new conversation’ features and more to make it more conversational.

The new feature will allow users to get notifications when there’s a new reply to a Tweet they are interested in. Users can subscribe to tweet replies in order to see how a conversation progresses and they can enable this feature by clicking on the bell icon present on the top right corner of a tweet.

You probably have notifications on for your must-follows. Now you can get notifications when there’s a new reply to a Tweet you’re interested in! We’re testing this on iOS and Android now. pic.twitter.com/MabdFoItxc

Twitter provides users with three options where in the first option, users can get notifications for the top replies of the tweet they follow, the second option allows users to get every new reply and third is to turn off notifications for tweet replies. The top replies will include those from the author, anyone they mentioned and people you follow.

Twitter is testing it on iOS and Android now and is expected to roll out on desktop version too.