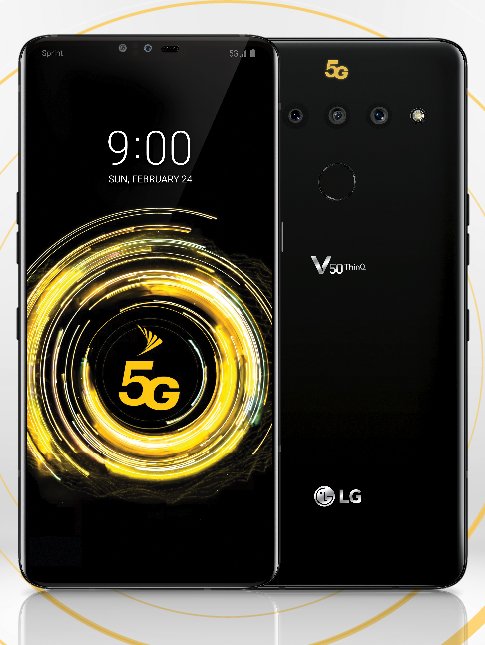 LG is expected to introduce the V50 ThinQ at the MWC 2019 event next week. The V50 ThinQ is also the company’s first 5G phone but we haven’t had our look first look at the phone, even though the launch was inching closer. To fill the void, the Sprint 5G variant of the V50 ThinQ has now surfaced online, courtesy of Evan Blass.

The design is pretty standard, but the leak doesn’t throw many details. It has a notch at the front, where dual-rear cameras are present and at the back, it has a triple rear camera set up along with a fingerprint sensor, LG and 5G branding. The image shows February 24th date and 9:00 time, hinting that the company might be planning to launch the device just ahead of MWC 2019.

According to rumors, the LG V50 is said to sport a 6-inch display, Snapdragon 855, and a 4000mAh battery. LG already confirmed a water-cooled cooling unit vapor chamber for the phone to overcome any heating problem. The SoC will be accompanied by an additional X50 5G modem. With the V50 ThinQ. As said, the leaked image suggests that the rear panel of the LG V50 ThinQ wouldn’t differ much from its predecessor in terms of design. Apart from V50 ThinQ, LG is also planning to launch the G8 ThinQ at the MWC 2019 event, stay tuned for more details.