Google’s experimental unit said to be silently working on developing a new app for discovering and playing podcasts; named Shortwave. This new app is being revealed by the trademark filing, which describes it as “allow[ing] users to search, access, and play digital audio files, and to share links to audio files.”

Though the trademark filing doesn’t specify the kind of audio being accessed, but a Google representative said the focus of the app was on spoken word content. A Google spokesperson emphasized the app was being developed within the company’s Area 120 incubator and not related to any of the existing Google products. 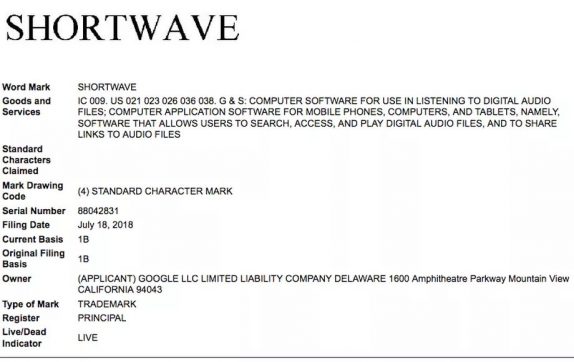 The current Podcasts app from Google is launched in June, nearly a month before this trademark was filed. Quite obviously, the two apps were developed in isolation, and it’s unclear how Shortwave would differ from Google Podcasts app.

One of the many projects that we’re working on within Area 120 is Shortwave, which helps users discover and consume spoken-word audio in new ways. Like other projects within Area 120, it’s a very early experiment so there aren’t many details to share right now.