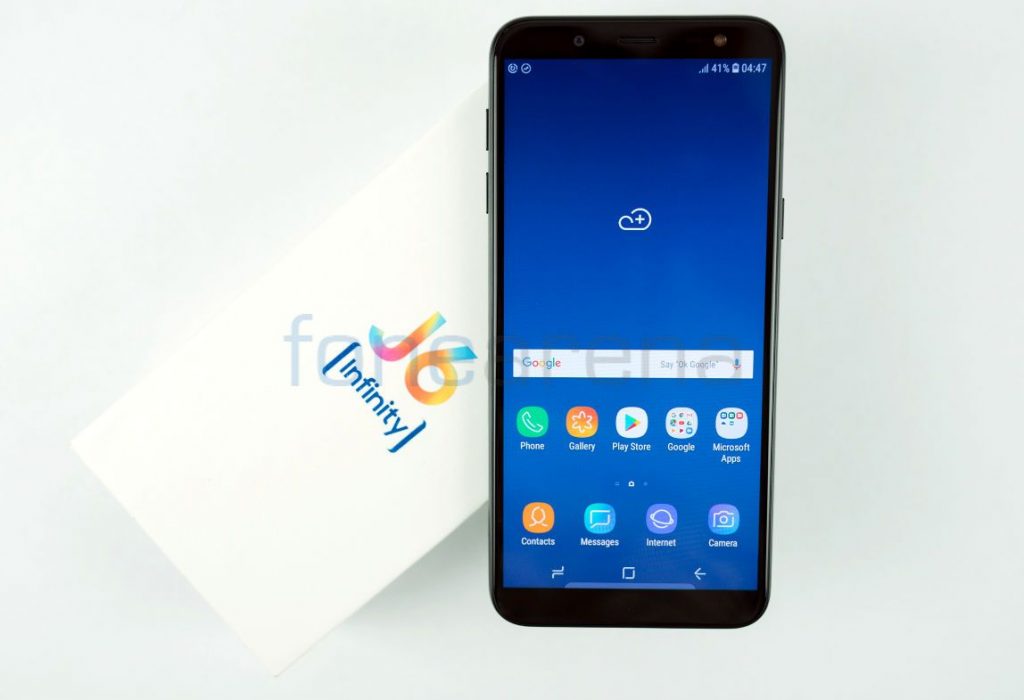 Since the in-pouring of Chinese smartphones in the Indian market, it has become difficult for the handset makers like Samsung, HTC and LG to make a dent in the mid-range smartphone segment. Keeping the optimism alive within themselves, the South Korean giant continues to launch the smartphones under mid-range with mediocre specifications.

In an attempt to restore their lost glory in the sub 15k segment, Samsung has come up with Galaxy J6 at starting price of Rs. Rs. 13,990. We got hold of the 3GB RAM variant unit for our review. Has Samsung managed to pull it off with the J6? Let’s check it out. 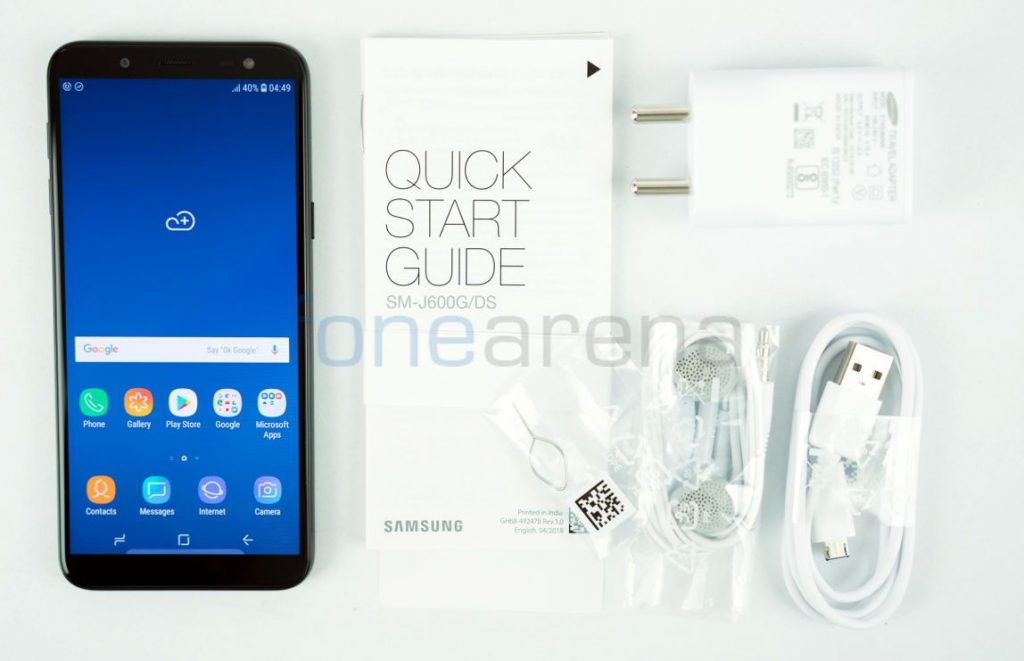 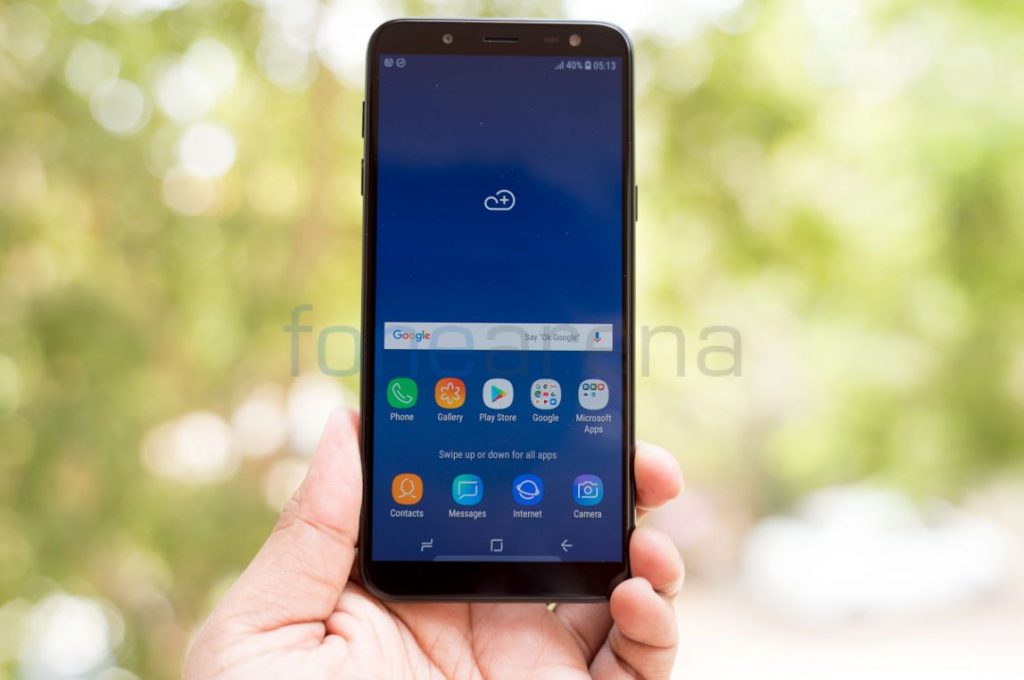 The Samsung Galaxy J6 sports a 5.6-inch (1480 x 720 pixels) HD+ Super AMOLED 18.5: 9 Infinity 2.5D curved glass display. Considering the brand and budget, we can’t expect more like a FHD Super AMOLED screen here. The Galaxy J6 has a screen-to-body ratio of about 75.9% and pixel density of 294ppi. Having said that, we didn’t find any issues with the display and is on par with most of the mid-range smartphones available in the market with FHD displays. Regardless, the display is vivid, vibrant, offers punchy colours, blacks are deep, text looks sharp and the sunlight readability is decent. The viewing angles are excellent as well.

Since it lacks the Ambient sensor, one has to manually adjust the brightness which might frustrate user at times. It also has ‘Outdoor mode’, upon enabled, makes the screen brighter for outdoor viewing for 15 minutes. In addition to it, the Galaxy J6 also have a Blue light filter, Screen mode (Adaptive Display, AMOLED Cinema, AMOLED Photo, and Basic), Easy mode and much more options. 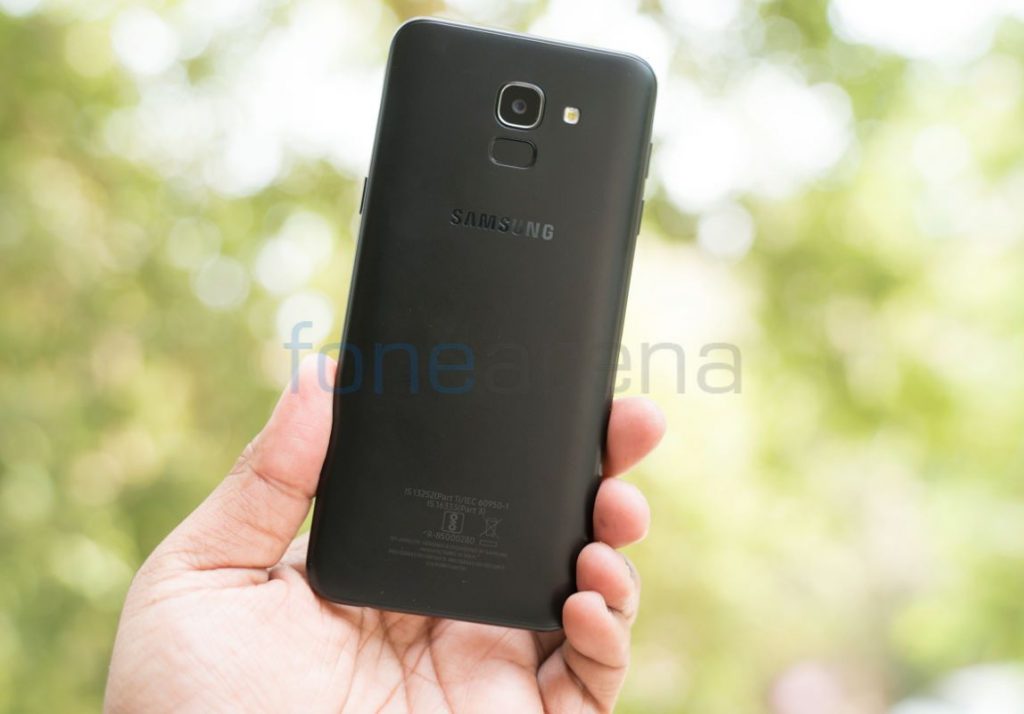 When it comes to design, I have always had a special liking towards compact smartphones be it Xperia Mini series, Apple iPhones or Galaxy S series. The Galaxy J6 fits right into this territory and for a good reason.

It measures 149.3 x 70.2 x 8.2mm and weighs around 154grams. Indeed, the smartphone is compact, delivers you a solid feel when held and offers good grip too. Furthermore, the Galaxy J6 encourages single-handed usage, and it’s relatively easy to reach the notification panel with thumb finger as well.

The Galaxy J6 has a polycarbonate back with a matte finish, making it a lightweight device. It looks and feels premium, fit and finish are up to the mark, the paint job is excellent and also attracts fewer smudges and fingerprints.

The placement of buttons vary drastically in Samsung’s mid-range and flagship devices. The front side of the display is almost dominated by the screen itself leaving little bezels on top and bottom. The top bezels houses 8MP front camera, earpiece, proximity, and LED flash. It’s worth mentioning here the Galaxy J6 lacks notification LED, ambient light sensor, magnetic sensor and gyroscope. Since the company has opted for on-screen navigation buttons, the bottom bezels remain untouched.

Moving to the right, we have speaker grille and power/lock button. The speaker grille is placed in a way, where it doesn’t get muffled too often while holding or placing it on the surface unless you deliberately want to. 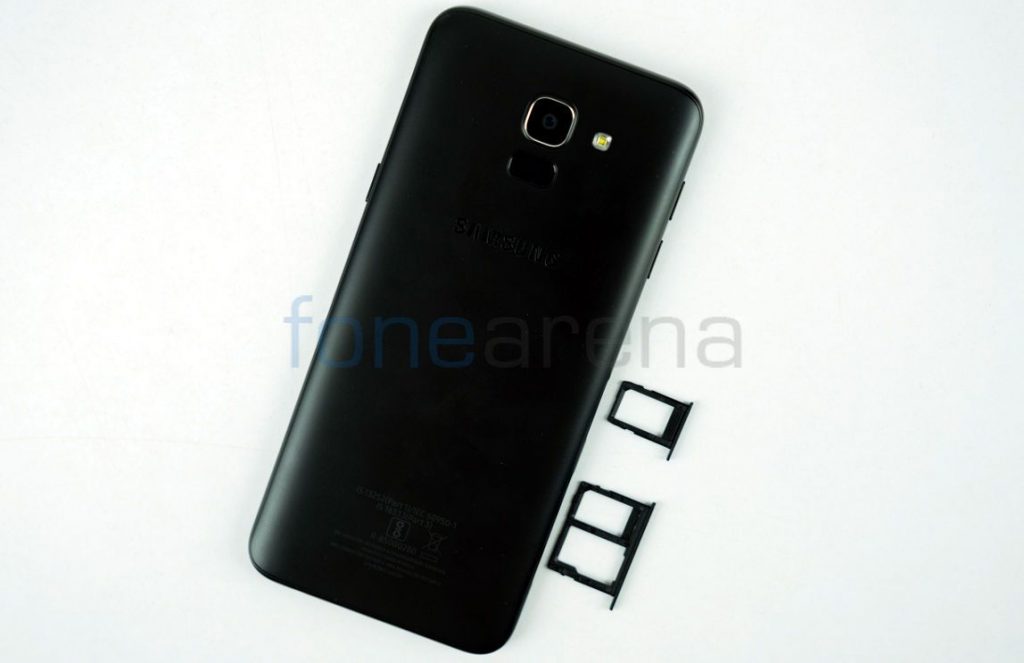 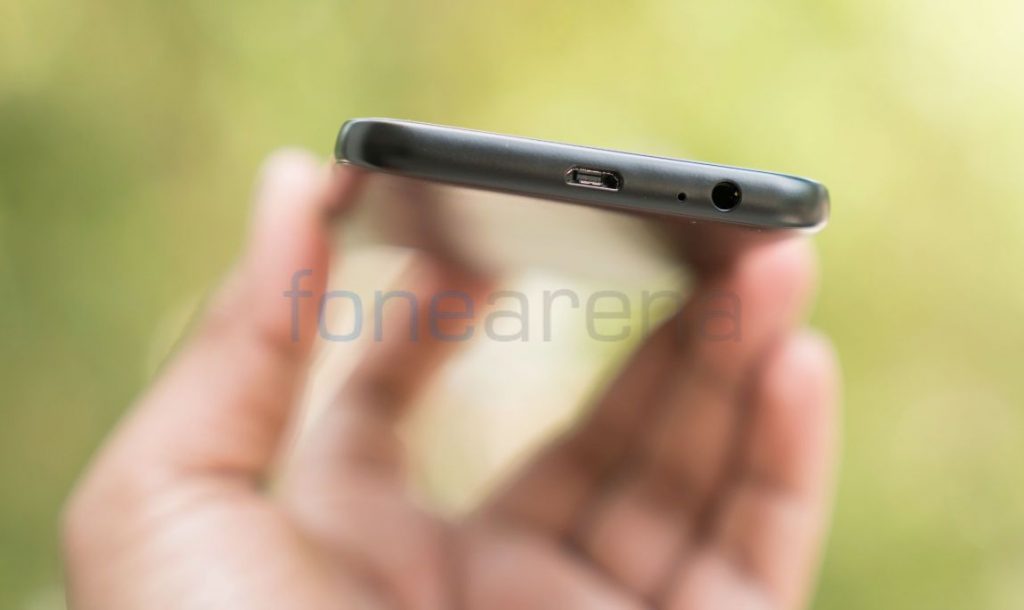 If we travel down, we get a 3.5mm audio jack, primary microphone, and MicroUSB port. Though the buttons offer good feedback, it’s on the harder side and requires a bit of pressure comparatively. 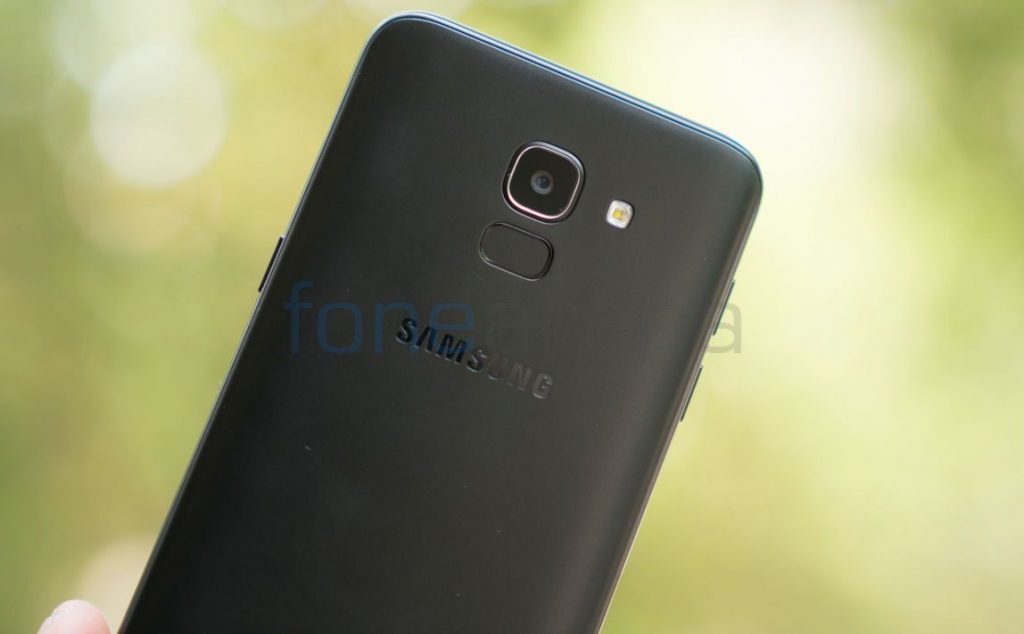 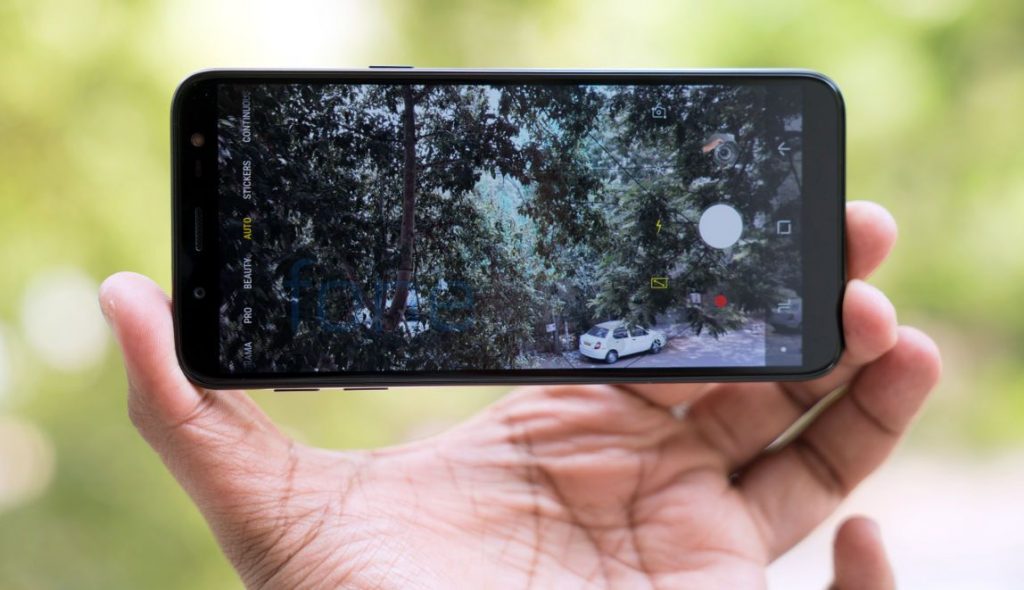 At this price range, most of the smartphone offer a dual camera setup, but Samsung chose to go with a single camera module. To be specific, the Galaxy J6 comes equipped with a 13-megapixel rear camera with an aperture value of f/1.9 and a 8-megapixel selfie shooter with f/1.9 aperture as well. Both the camera has LED flash to help in for low light scenarios.

The phone has a new camera UI that allows you just swipe to switch between the modes – Auto, Live focus, Pro (to adjust ISO, Shutter speed, focus, white balance and exposure manually), Food, AR Emoji and Hyperlapse. On the bottom, we get various options as well including settings, Full View, Flash on/off, Filter and Camera Change. Below that we get a video recording button, shutter button, and a mini gallery too. 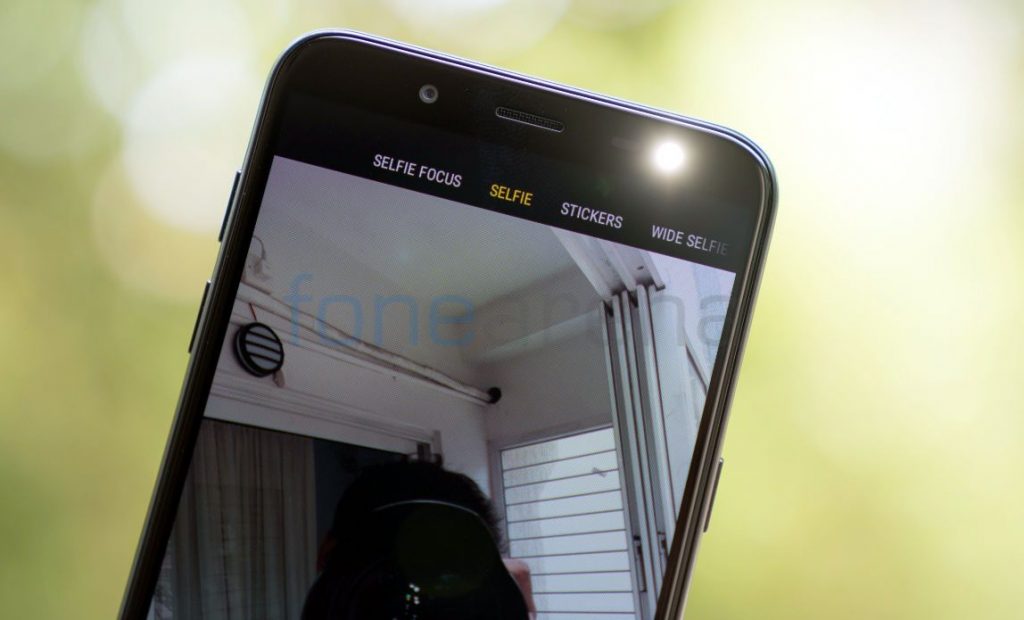 To be honest, the camera department is a let down in the Galaxy J6. The camera UI is sluggish and lags when you click the shutter button. Furthermore, the auto focus keeps hunting the subject, even after its locked. However, it doesn’t end here as the auto focus went even worse on Macro conditions. 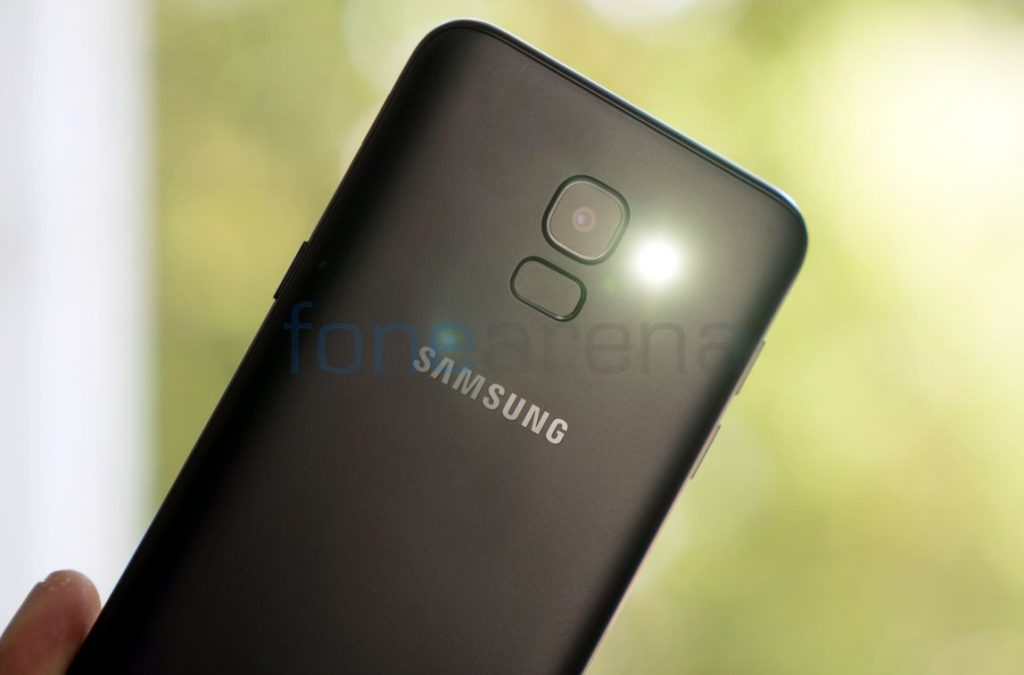 Talking about the image quality, the daylight shots were decent with good amount of details, retains the natural tone to without any over-processing. I had a very bad experience shooting macro subjects, as the focus didn’t lock properly for the first couple of time. Even though the problem persisted, I managed to capture few shots, though.

Under low light conditions, the picture came out well than we expected, but the images don’t have any details. Images with flash were good and the flash is not overpowering even in closeup shots. The daylight front camera shots are good, but in low-light, there is a lot of noise in the image. All things considered, the phone has a decent camera, but not anywhere near its competitors including Redmi Note 5 Pro, Mi A1, Realme 1 for that matter. 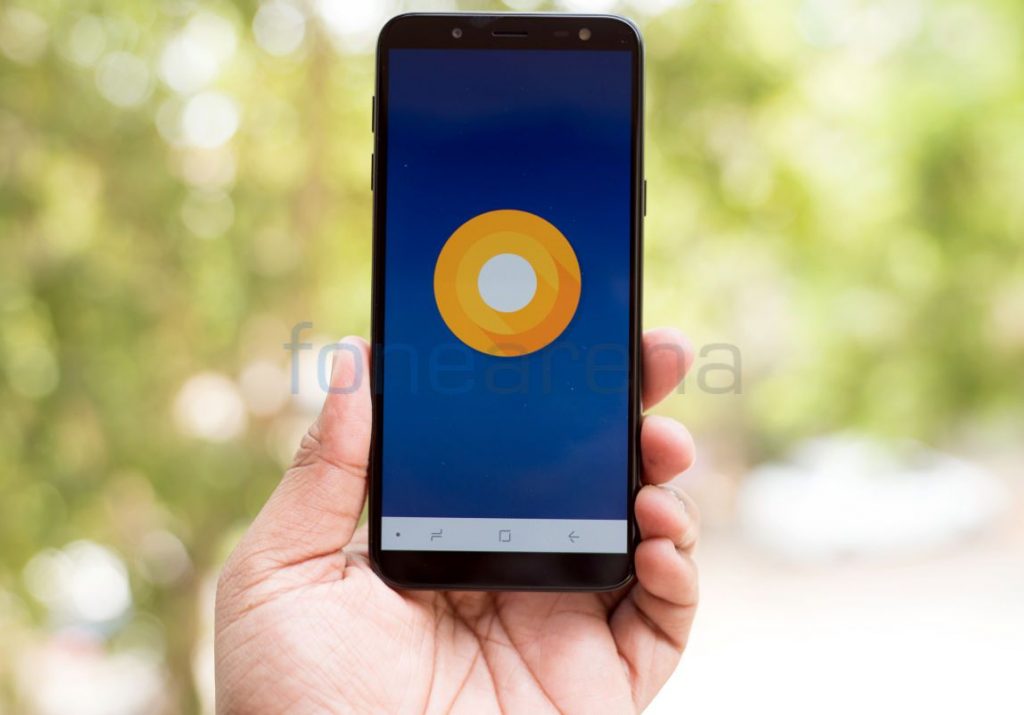 The Samsung Galaxy J6 is shipped with Android 8.0 (Oreo) on top of Samsung Experience Versio 9.0 with Android Security patch for April 2018. Since Samsung is known for its slow software updates, one cannot expect the Android P update anytime.

Talking about the UI, it has a vertical swiping interface by default instead of separate apps button, so to navigation between the home screen and app tray you need to swipe up or down. You can tap and hold an app icon to open a quick options menu that enables you to perform tasks such as uninstalling apps or Remove from home.

Under the advanced feature option, Games Launcher, that gathers your games downloaded from Play Store and Galaxy Apps into one place for easy access, Fingerprint gesture to open and close notification panel using the fingerprint sensor. Similar to other Android phones, it also has Multi Window mode that was first introduced by Samsung several years back. Other options include Smart Alert, Palm Swipe to capture, Panic mode, Dual messenger and Chat over video.

The Device maintenance option permits you to manage your device’s battery life, storage, RAM usage, and security all in one place. The Samsung Secure Folder lets you save your personal data and information. You can access Bixby by swiping towards the left. It has Home and Reminder features currently.  Home lets users see the content they care most about and Reminder helps users remember important events and to-do tasks.

Apart from the usual set of utility apps and Google Apps, the smartphone comes with the Facebook app and Microsoft Apps – Word, Excel, PowerPoint, OneNote, OneDrive, and Skype. You also get an option to install apps when you are setting up the phone. The Galaxy J6 supports Samsung Pay Mini, which is Samsung’s own payment service.

Out of 3GB of RAM, you get 1GB of RAM when the default apps running in the background. Out of 32GB onboard storage, you will get 21.2GB of storage is free on first boot.

The fingerprint sensor is present on the back of the phone, below the camera sensor. The process of enrolling the fingerprint takes no time at all. Also, you can add up to maximum of 3 fingerprints in this device.  It can also be used for Samsung Pay in markets where the service is available and for Samsung Pass to verify your identity with a browser and other supported apps.

Beside fingerprint scanner, you can unlock the device with Face Unlock option once you register. Unlike other Chinese smartphone that unlocks in a flash, the Galaxy J6 here takes good 2 seconds to get unlocked. 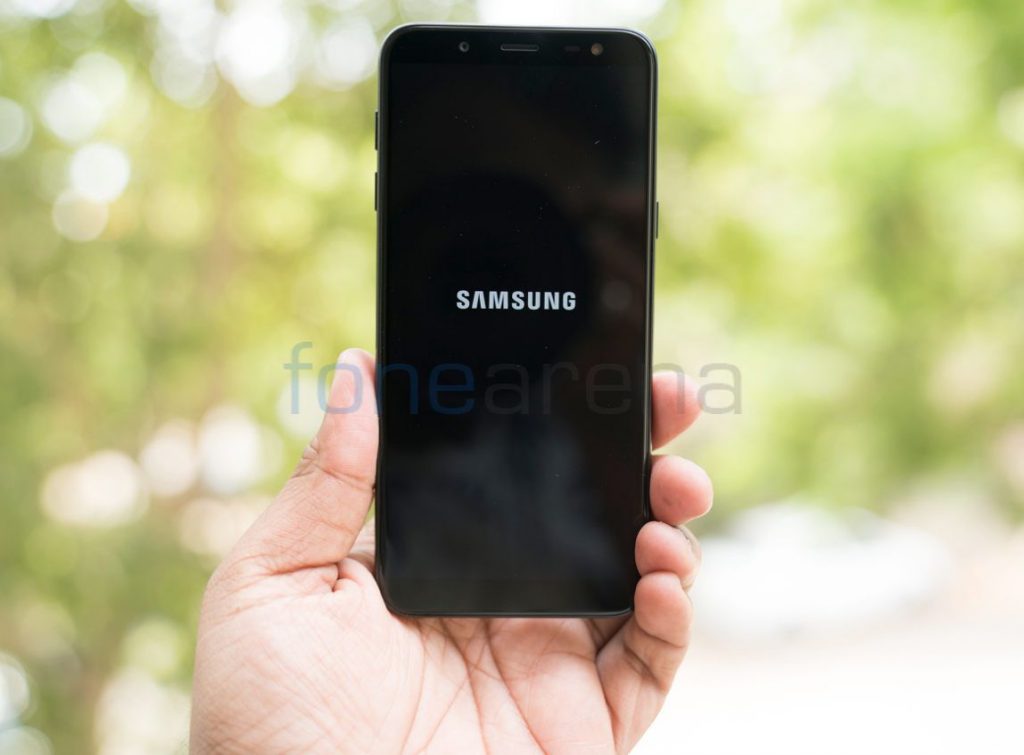 It has 4G connectivity supporting many bands and also has Voice-over-LTE (VoLTE) support as well for Reliance Jio, Airtel and Vodafone as well. Both the SIMs support 4G, but you can enable 4G only in one SIM at a time, while the other goes to 3G. it has Smart Dual SIM feature, similar to other latest Samsung Dual SIM smartphones. This automatically forwards calls from the phone number on SIM 2, even if a user is on the phone with SIM 1’s number.

There is a new option called confirm SIM card for calls so that it asks which SIM card to be used for the next call when you make a call without your preferred SIM card for calls. The dialler and messaging has the same UI as the other Samsung phones. Since this is a dual SIM phone, you get option to select either SIMs when calling or sending text message. There are no call drops and the earpiece volume is good. 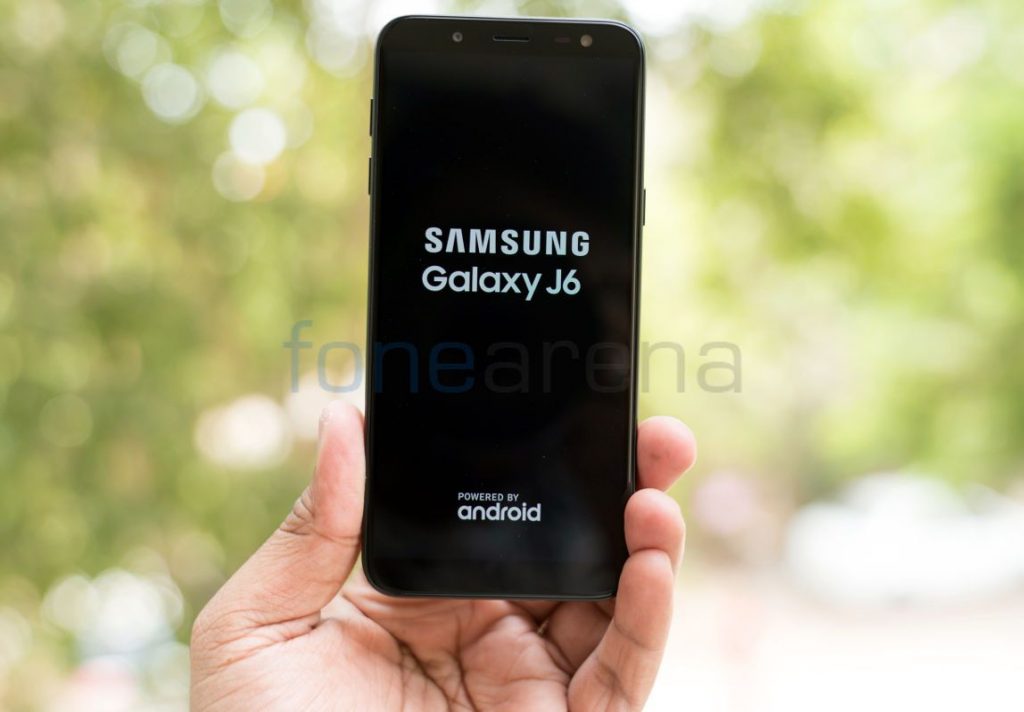 The Samsung Galaxy J6 is powered by an Octa-Core Exynos 7870 14nm processor with Mali T830 taking care of graphics department. The Qualcomm equivalent to this is the Snapdragon 625 chipset. The Exynos 7870 is power efficient processor resulting in longer battery life on a day to day usage. This tried and tested Exynos chipset works and optimised well for the device.

On our day to day usage, the device never misses a beat and we haven’t seen stutter, hang or lag yet. It processes everything regardless of what you throw at it, thanks to 3GB RAM. Having said that, we did witness lag sometimes during graphics intensive gaming like Riptide GP 2, and Asphalt. Nonetheless, the Exynos 7870 is a capable processor, but when you consider factors like future-proof, it doesn’t stand anywhere near.

Check out the synthetic benchmark scores below 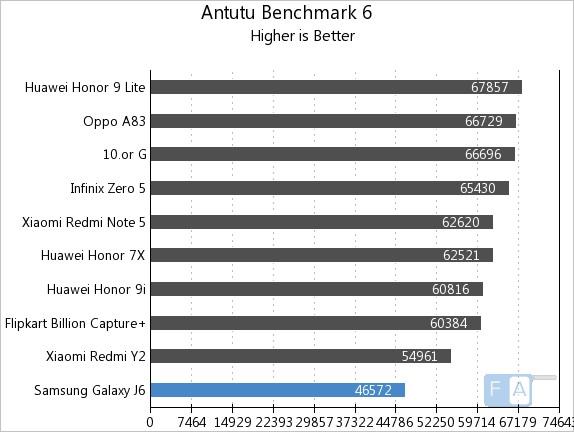 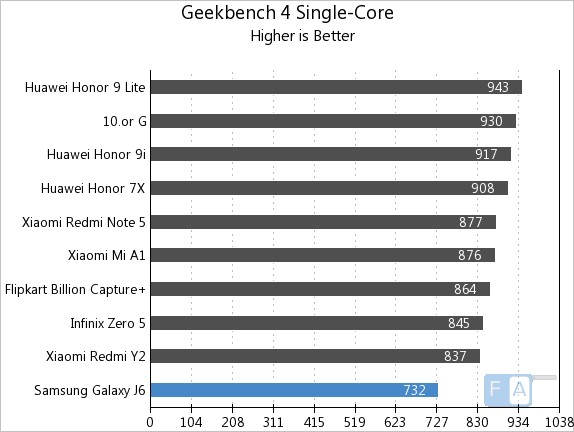 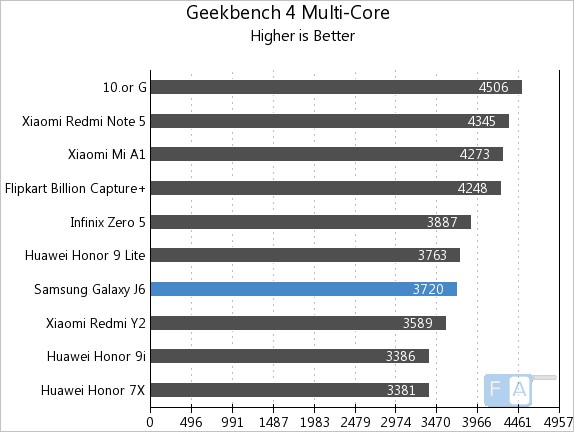 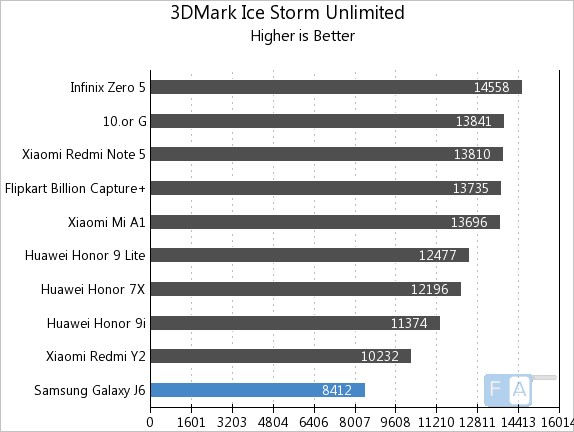 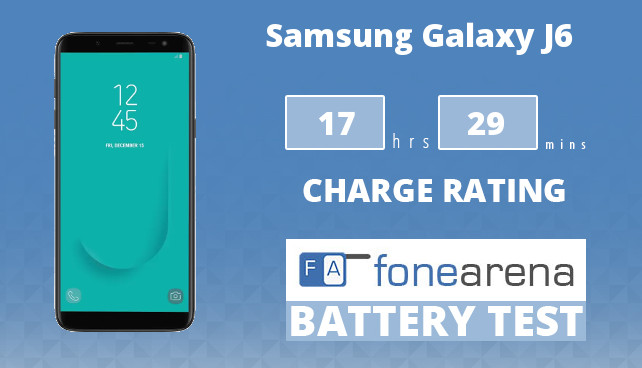 I used Galaxy J6 as my daily driver for around 10 days with moderate to heavy usage. During moderate usage, which involves IM, Maps, Youtube and Amazon Prime music streaming, 25% to 30% of juice remained at the end, while on heavy usage (gaming, video calls) I got around 15% and sometimes I was forced to charge as well. If you want to save last bit of juice when you are away, turn on the Power saving mode – Mid and Max. Having said that, it might affect the performance of the device to a certain level.

In our OneCharge rating, the Samsung Galaxy J6 achieved 17 hours and 29 minutes, which is good, especially due to brilliant talk time and video playback time. We will bring you the complete set of battery life test results soon.

The speaker grille is placed on the top right side of the device in Galaxy J6. It is a single firing speaker and the loudspeaker volume is decent. The audio quality through the bundled headphones is not as good third party headset. In this case, I used AKG headphones, which came along with the Galaxy S8 smartphones.  But I felt difficulties in listening to songs in a noisy environment even with full volume. In addition to it, the Galaxy J6 has dolby atmos for immersive audio experience as well.

Did Samsung strike the right chord with Galaxy J6? Not really. Talking about the positives, the Galaxy J6 is the front runner when it comes to the build quality, display, and battery life, and that’s about it. At this price point, weighing the pros and cons, Galaxy J6 lacks the “VFM (Value For Money)” factor, which seems to be the buzzword these days.

However, we have lots of choices under 15K segment with additional features and powerful specifications. Buy Samsung Galaxy J6 only if you are a casual user, brand consious and doesn’t care about camera, sensors and regular software updates. To summarize, here are the