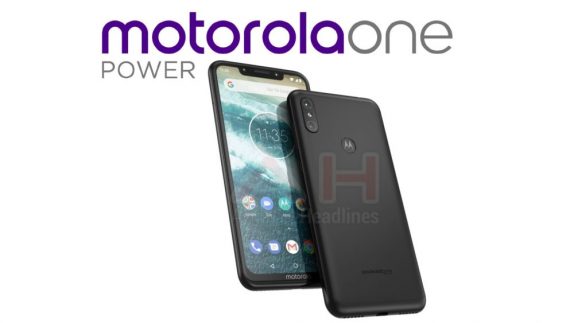 Motorola’s 2018 line-up kickstarted with the launch of Moto G6 and E5 series recently, and off lately it is the Moto Z3 Play that is making the noise even before its launch next week. And, now it looks like Motorola might be planning an entire line-up that might replace the Moto X series that got cancelled recently.

The first device in the new Moto series is the ‘Motorola One Power’ and it is an Android One device going by the branding on the rear side, meaning this phone will be picking off things where the Moto X4 left off last year. Since the naming has ‘Power’ series it might be en entire new lineup, so more variants might be coming along.

Moving along, the Motorola One Power looks a lot like the iPhone X with a top notch and a bottom chin. Since there is a notch, it packs an 19:9 aspect ratio display, curved edges, and a flat back, Unlike most Motorola phones, the Motorola One Power has a vertical arrangement on the left side. It comes with dual-rear cameras and LED flash sandwiched in the middle. In what appears to be a fingerprint sensor is present in the Moto dimple.

Unfortunately, this where the good things end, we don’t have any hardware details about the specifications so we have to wait for some more time until the company launches it officially.