A mysterious HTC smartphone has found surfacing the Geekbench benchmark platform. The device is expected to be a mid-range phone going by the specifications it is offering. According to the benchmarks, the phone comes with a model number 2Q5W1.

According to the benchmarks, the new HTC smartphone is expected to be powered by the Qualcomm Snapdragon 625 SoC with 3GB RAM and running on Android 8.0 Oreo with Sense U.I on top. The smartphone has scored a decent 770 in single-core test and a 3893 in the multi-core test. 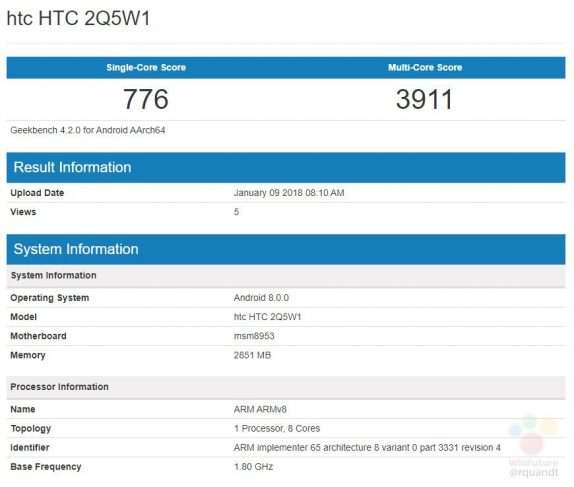 Since it is a benchmark listing, we don’t have other details regarding the camera, display size, and battery capacities. There are chances that HTC might introduce the latest mid-range smartphone at the MWC 2018 event later this month, it is also likely that the company might skip the event and launch it at a later date in a special event.

If we were to guess rest of the specification, we could expect a 5-5.7-inches HD or FHD+ display with an 18:9 aspect ratio, a moderate 3000mAh battery and single rear camera setup. Since these are just rumors, we advise you to take this news with a pinch of salt.