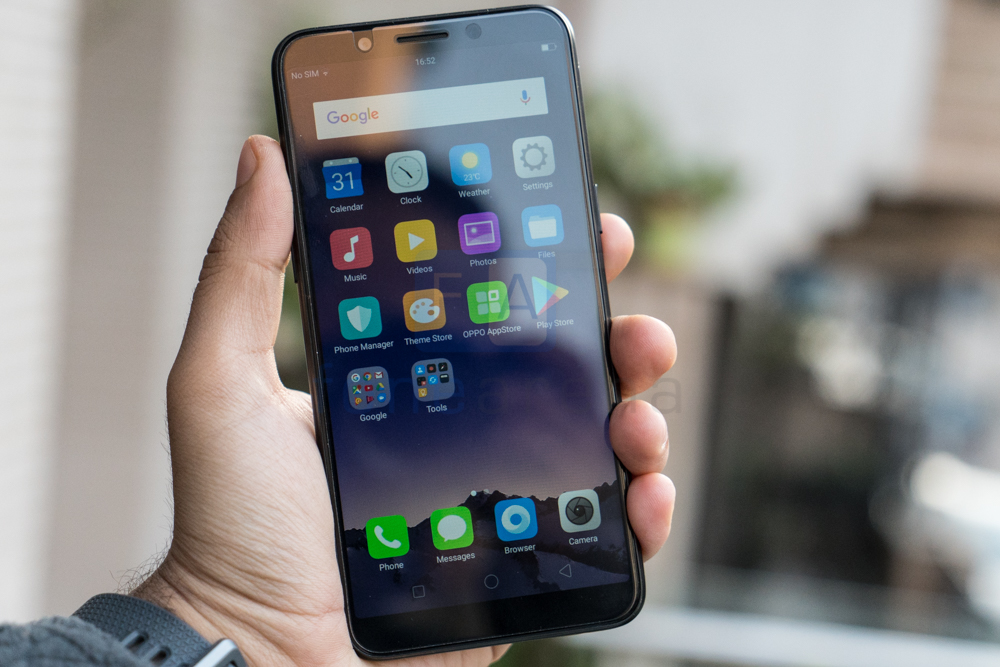 OPPO has built a large following for itself using a combination of extensive offline marketing, television ads and most importantly, devices that seemingly cater to exactly what the consumers want. Through focussed marketing and a slew of products, the company has been trying to take on Xiaomi and others, head on. The A83 competes with the likes of the Moto G5S and the Xiaomi Mi A1. With OPPO’s big offline play, it is bound to get a lot of eyeballs from customers, but is it worth your consideration? Let’s find out.

Minimalism is the key design element here. The front is absolutely clean and bereft of physical controls. The bezels are tiny though not entirely absent. At this price point though, these are some of the slimmest bezels you’re going to find and simply put, the design brings the attention on content instead of the hardware. 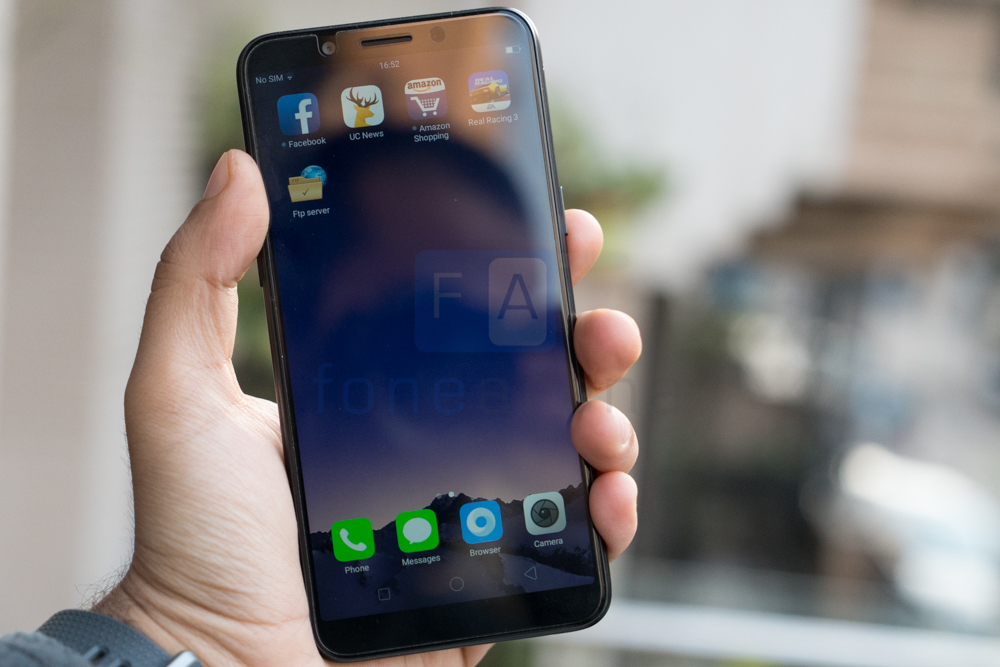 18:9 has hit the mainstream and even mid-range phones like the OPPO A83 come equipped with minimal bezels and ultra wide displays. The 18:9 panel has allowed OPPO to install a larger 5.7-inch display into the footprint of a much smaller screen. The entire phone for that matter has a small footprint that fits comfortably in your hand and feels fantastic at it.

The right side of the phone has a slot for dual SIM cards as well as a microSD card slot. Below it is the power key. The left-hand side has a volume rocker. The buttons are one of the few hardware points where OPPO could’ve done better. There’s significant wobble to the keys and we’re concerned about how they’ll age over years of use. Additionally, the phone retains a micro USB port at the bottom which is positively antiquated by now. We expect all new phones to ship with USB Type C and it is disappointing to see the old connecting standard here. Thankfully, OPPO hasn’t got rid of the 3.5mm audio jack. 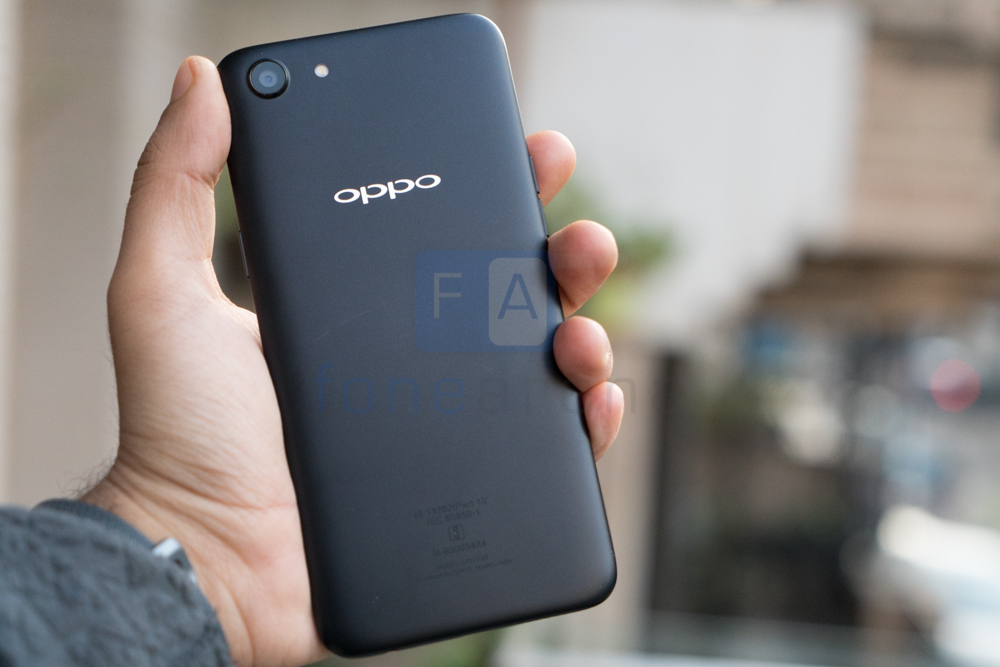 Over at the back, the OPPO A83 exudes a premium look. Despite being made of plastic, the phone looks and feels great. At the top left corner is 13MP camera that sits proud of the body. The sides of the phone gently curve over to the front and end in a ridged edge. This makes the phone sit comfortably in the palm while making it easy to get a grip with your fingers.

The OPPO A83 runs ColorOS v 3.2 on Android 7.1.1. The interface takes more than a little inspiration from iOS and has done so for years. ColorOS is a pretty good approximation of how iOS deals with the interface and is a big break from stock behavior.

First things first, there is no fingerprint scanner on the hardware here. OPPO has implemented a form of face unlock that employs the front camera. This works fairly well in good light and is predictably hit or miss in low light. You’ll also need to be looking straight on at the camera. When it works, it is pretty seamless and drops you straight into the home screen. When it doesn’t, well you’re back to using the plain old passcode. The interface has no app drawer and all the icons are laid out in a grid-like pattern.

OPPO has gone ahead and changed the notification hub as well which is really unfortunate. Toggles have been torn out from the pull-down hub and are now placed in a hub that is pulled up by swiping from the bottom. Swiping down from the top just shows you the notifications. Of course, there are third-party apps like UC News, Amazon and Facebook preloaded on the phone. There are apps for weather and a boost mode that claims to improve performance by clearing out the RAM. All in all, if you’ve used Color OS before, there’s not too much new here. The interface is functional and gets the job done.

The OPPO A83 is powered by a 2.5Ghz Octa Core MediaTek Helio P23 chipset. This is paired with a Mali G71 GPU and 3GB of RAM. The performance of the phone is about on par with the Snapdragon 625 toting competition. Day to day usability is smooth. On occasion, there’s a slight hint of latency that we feel might also be because of the overzealous use of animations throughout the interface. Generally, the phone performs well and we were able to run almost everything we threw at it. We’re at a point where even mid-range specifications are sufficient for most people. The biggest differences are mostly around the speed at which apps and games start up and there too, the difference is usually a second or two at worst. We’ve included some benchmarks below to give you an idea of comparative performance. 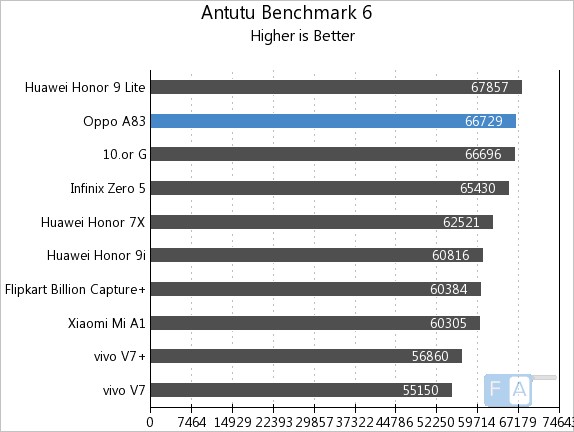 The OPPO A83 scores 66729 points in the AnTuTu Benchmark which places it near the top of the test bench. 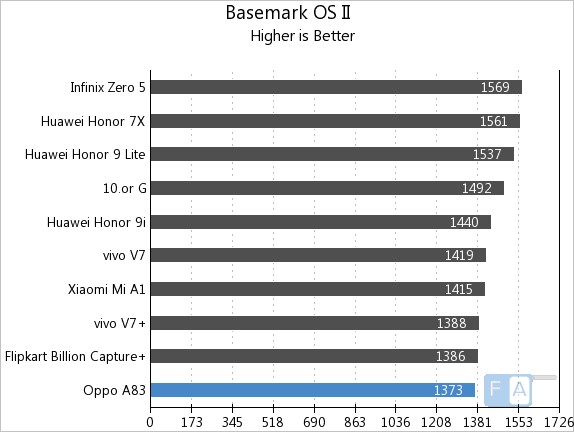 In the Basemark OS II benchmark, the phone doesn’t do quite as well and scores 1373 points. 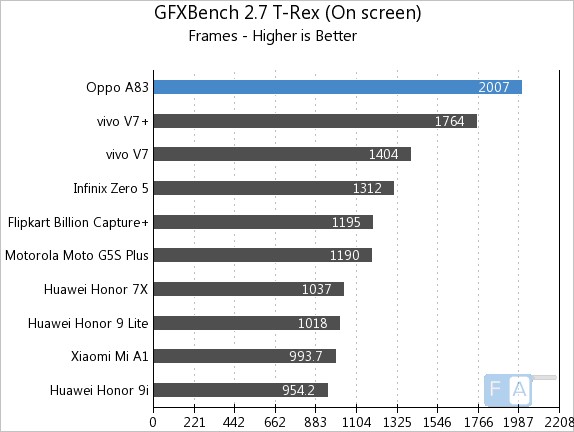 In the graphics-centric GFXBench benchmark, the phone scores 2007 points and ranks at the top of our test bench.

The OPPO A83 has a 5.7 inch Full HD+ display. This gives the screen a resolution of 1440 x 720 pixels. With an 18:9 aspect ratio, this is just a little lesser screen area than a regular 5.5-inch display. The 18:9 aspect ratio makes the screen taller and the phone slimmer to hold. OPPO has also obviously managed to reduce bezels all around. There is still a forehead and chin on the hardware but we’ll take that over a notch. 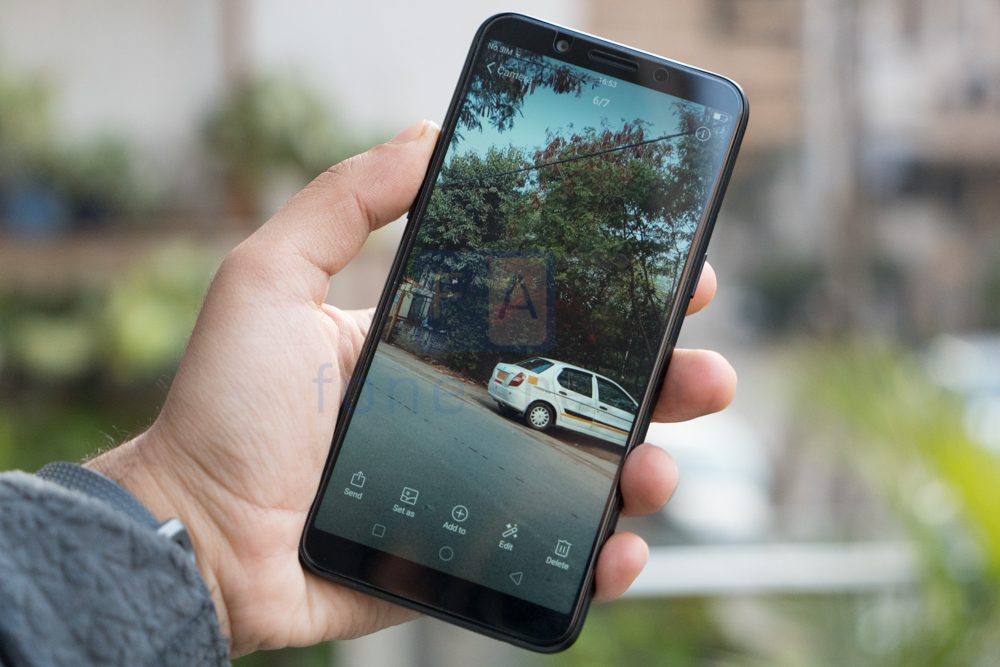 The screen itself isn’t quite the highest resolution around. At 5.7 inches, the screen looks just very slightly soft. Color reproduction is acceptable but not quite the best. Even the brightness levels leave a bit to be desired. What we didn’t like was the level of color shift. Any more than a 45-degree angle and you’ll observe a very obvious purple tinge. As high-quality panels become more and more prevalent, it is hard to excuse a panel that exhibits such obvious color shift.

A good camera is a pre-requisite for any mid-range smartphone. The OPPO A83 delivers and while it might not be the absolute best in its category, it does a good enough job to capture your day-to-day moments. 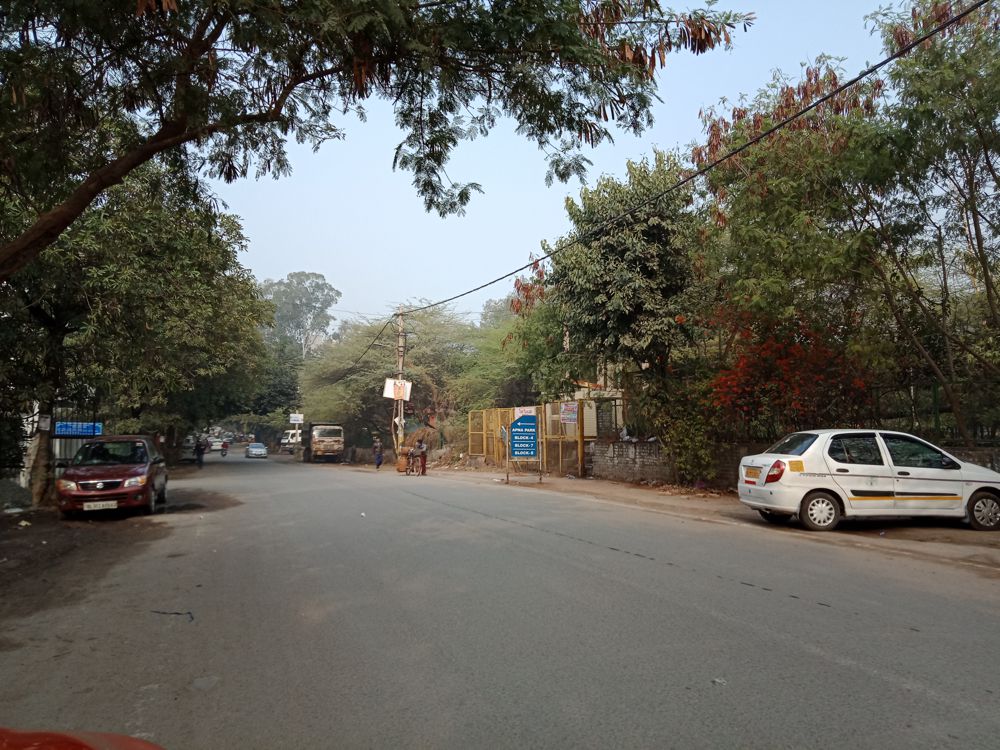 The 13MP unit at the rear of the phone is paired with a single LED flash. The phone manages to take reliably decent shots with accurate white balance. Autofocus is fast enough in good light but can be hit or miss in low light. For that matter, image quality itself goes south once the light starts dipping. Then again, this is the case for most mid-range phones.

The phone finds it hard to handle bright highlights and tends to wash out the image if the sun is behind the subject by trying to compensate for it. HDR mode isn’t particularly effective here. On the other hand, the A83 can easily focus even on very close up objects. The front camera here is an 8MP unit and as you can see in the photo sample above, it takes very good selfies.

The OPPO A83 has the full suite of connectivity options you’d expect from a mid range smartphone. The phone supports 4G VoLTE connectivity. There are dual SIM card slots but you can have 4G only on one at a time. There’s Wi-Fi 802.11 a/b/g/n (2.4GHz + 5GHz), Bluetooth 4.2 and GPS + GLONASS onboard. The phone also supports FM Radio but you’ll have to plug-in your 3.5mm headset.

The battery on the phone is a 3180 mAh unit which proved to be just about sufficient for a full day of use. We’d have liked a larger battery here which would let us push the phone for a night of use without having to hunt for a charger. The majority of the competition like the Mi A1 and the Moto G5S Plus all have similarly sized batteries so it’s not really a loss here.

The OPPO A83 is a well-balanced smartphone that offers a good enough balance between price and performance. OPPO has focused on some gimmicks like Face Unlock but it works well enough. We quite dislike the fact that the company has gotten rid of the fingerprint reader since users should have the option to select their preferred security method. 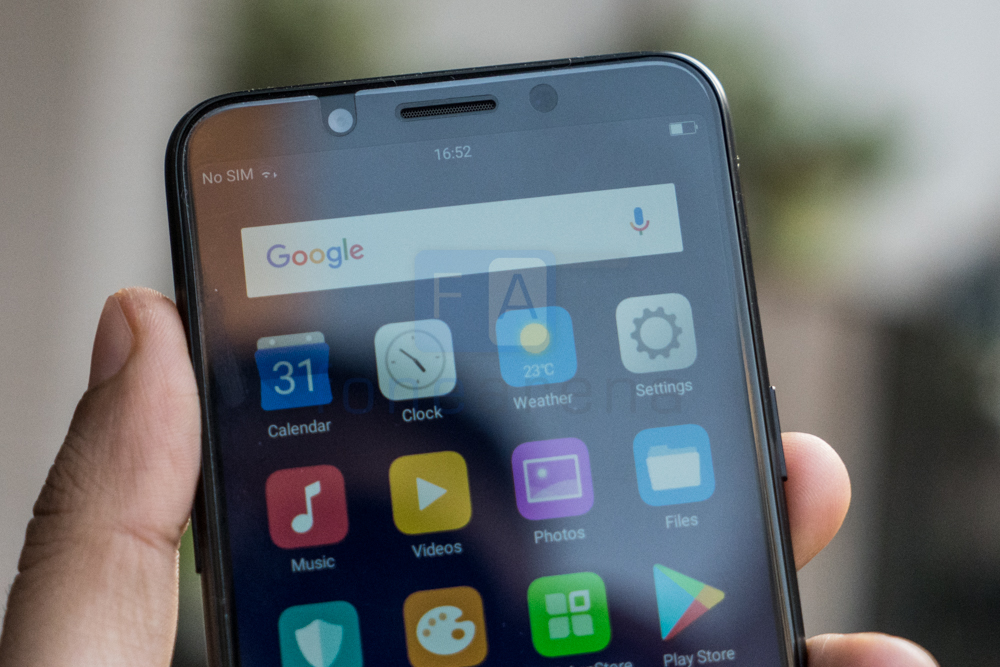 Priced at Rs. 13,990, the OPPO A83 is an interesting and stylish competitor to the Mi A1 and the Moto G5s Plus. Definitely worth a second glance before investing in a smartphone in the sub Rs. 15,000 category. It is available from Flipkart and Amazon.in online as well as offline stores.