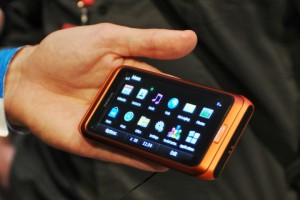 I recently had a couple of hands-on with Nokia’s new E-series Symbian^3 powered E7 device at Nokia World 2010. The E7 devices on display were pre-production unit running on none-release firmware.

The E7 has the same design language as the N8. The anodised and sleek metal body feels great in my palms, and despite being physically larger than the N8, it wasn’t uncomfortable to hold. It has a feel and look like a premium device, and it should. It will be available in the same colour schemes as the N8 as well. 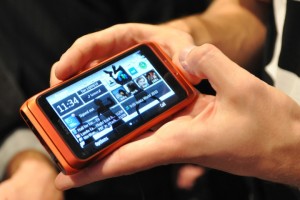 The front is dominated by a large 4″ OLED screen that a Nokia rep on the floor confirmed as a CBD (clear black display) type. Whether this is true or not remains to be seen, but the screen is colourful and had excellent contrast and black levels. Despite having a resolution of 640×360 (lower than high end Android devices and iPhone 4), the display looks sharp.

Powering the Nokia N8 is Symbian^3. As far as I know Symbian^4 will not be made available on this device, so take that into consideration when considering the E7. The firmware on this isn’t optimised yet as the few E7 I was playing with kept stalling and crashing. Nokia insisted that it was running on a beta firmware and by the time it ships it should work as good quick and stable as the N8. 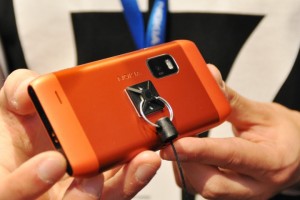 As the E7 shares the same DNA as the N8, it also has plenty of the same features. It has a HDMI-out port capable of outputting 720p videos, 3.5mm headphone jack, Wireless LAN, Bluetooth and GPS receiver. The camera is a 8MP EDoF type. I am not particularly fond of EDoF (a type of fixed focus) , but a Nokia engineer has assured me that with tweaks, the E7 is capable of taking great pictures. 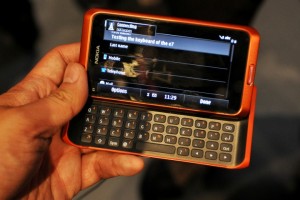 Like the N97’s keypad, the E7’s keypad slides up and is tilted a little forward. The four row keypad is a welcomed improvement over the N97’s three row keypad. A five row keypad would have been better but I can’t see any physical space for an extra numerical row. At least it has a proper space bar. I have my reservations on the key travel and having played with the HTC Desire Z, Nokia need to improve the tactile feedback of the E7’s keyboard.

People know me as more of a E-series guy, but I am not entirely convinced by the E7. There is little doubt that this phone would be a great hit, but hopefully Nokia can prove me wrong when the E7 ships in Q1 2011.