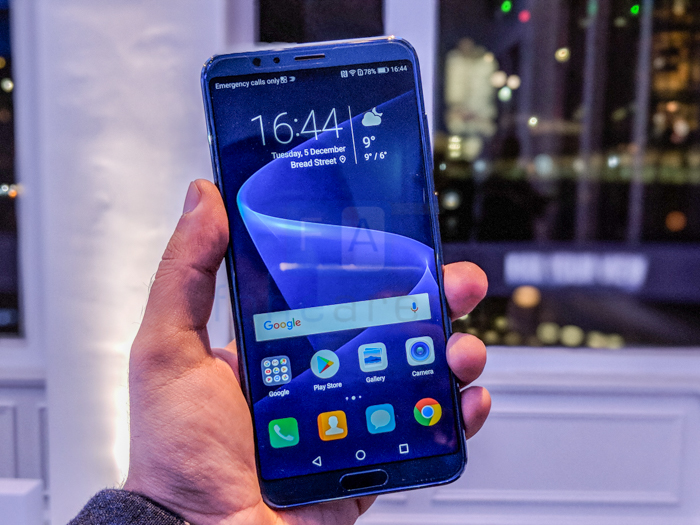 At an event in London, Honor announced an all new device as part of the View series of smartphones. Dubbed View10, it is the first device to pack the new Kirin 970 chipset that comes equipped with a dedicated NPU or Neural Processing Unit. If you’d remember, we brought you the lowdown on that from IFA and now we’ve got our first product based on the new processor. There’s more to the Honor View10 though, let’s find out in our hands on.

In terms of design, the View10 isn’t all that different from other devices in Honor’s portfolio. Not that that’s a bad thing. The phone has a minimal look to it with the 18:9 display up front. While not entirely bezel-free the way that Xiaomi and others have managed it, the Honor View10 follows the company’s maxim of “Max Your View” and offers an expansive display to view your content. Up above is the 13MP front camera sensor while at the bottom is the fingerprint reader. 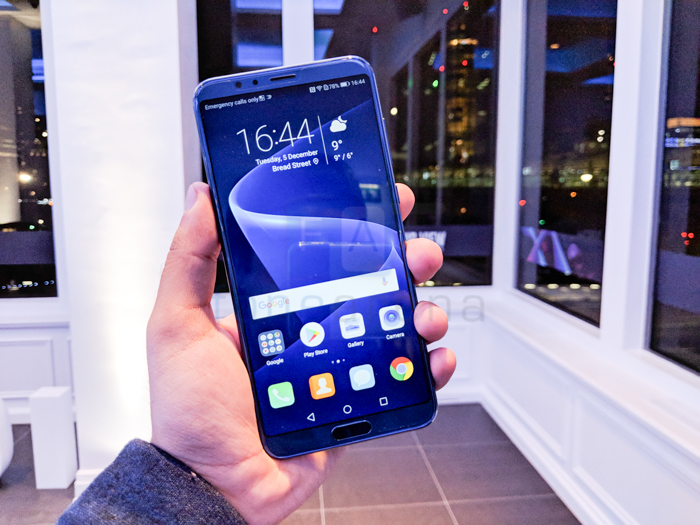 The display itself is a 5.99-inch Full HD+ panel. Despite the size of the screen, the resolution proves to be more than satisfactory. While in our time with the phone, we had no opportunity to test it outdoors, we did observe that the screen is borderline oversaturated with boosted colors all around. However, there are options to tweak this and most people are generally happy with their bright, colorful panels since it adds a certain depth to games and photos. Moving on, the phone makes use of on-screen capacitive keys to maximise the view.

The left side of the phone is where you’ll spot the Hybrid Dual SIM slot. As the name suggests, you can choose between two SIM cards or a single SIM card and a microSD card. Not the most ideal situation but this is something that we’ve come to accept. The right side houses the volume rocker and the power button both of which have a good enough give and feedback.

Honor made a big deal of the fact that the View10 is equipped with a headphone jack. Located right next to the USB Type C port, you’ll also spot the speaker grille on the opposite side. 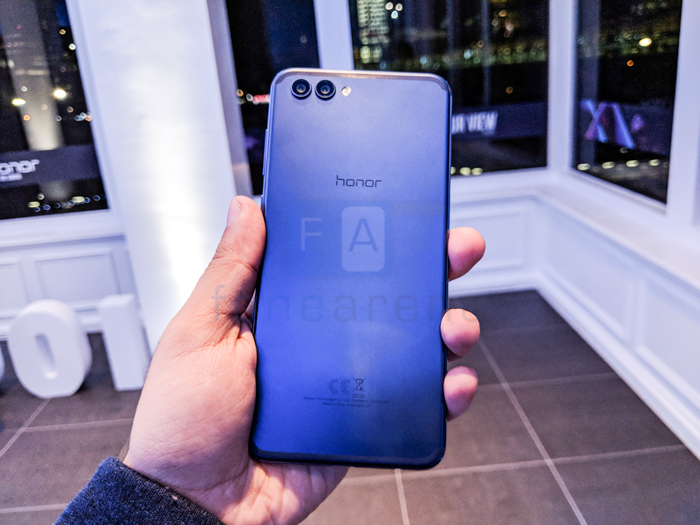 Over at the back, there’s dual camera module as is the case with most flagships these days. Honor claims that the combination of RGB and Monochrome sensor delivers enhanced images thanks to added dynamic range of the monochrome sensor. There’s more at play here though that we’ll talk about shortly. Rest of the camera specs include a f/1.8 aperture, PDAF and dual LED flash. Of course, the phone can do portrait mode too, in fact, even the front camera is capable of portrait capture using a mixture of optics and artificial intelligence thanks to the dedicated neural processing unit. 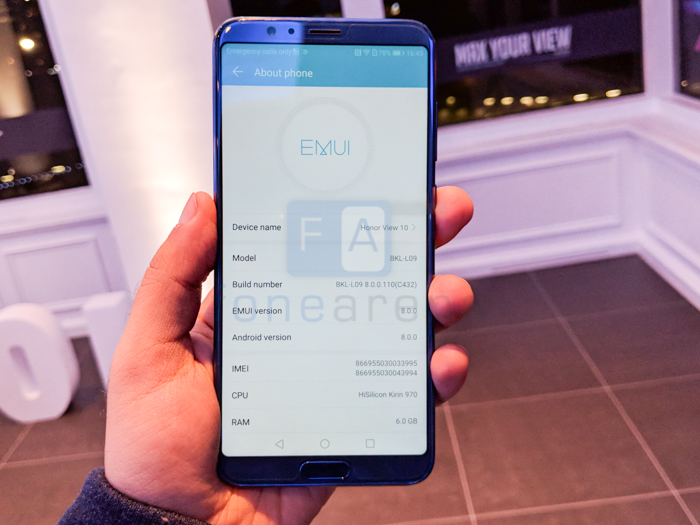 In terms of performance, the Honor View10 is the first device to be powered by Huawei’s all-new Kirin 970 chipset. The chipset is the first to ship with G72 GPU which drastically reduces power draw while being more powerful. The big draw here is, of course, the NPU which Honor has been hyping up with the launch of the View10. Honor made it a point to mention that the NPU can process up to 2000 images per minute which is 20 times faster than a general purpose CPU. Beyond the obvious benchmarks, what is interesting is how Honor is enabling this on the handset. We’ll be talking more about this in a separate article. On the Honor View10, it is being used to improve image quality, provide real-time text translation when applied to images without having to connect to an online network. Honor announced a partnership with DJI allowing you to control your drone using voice commands on your phone. The phone runs EMUI on top of Android 8.0. There’s a lot of new additions to the ROM that we’ll best be able to cover once we have our hands on our unit. 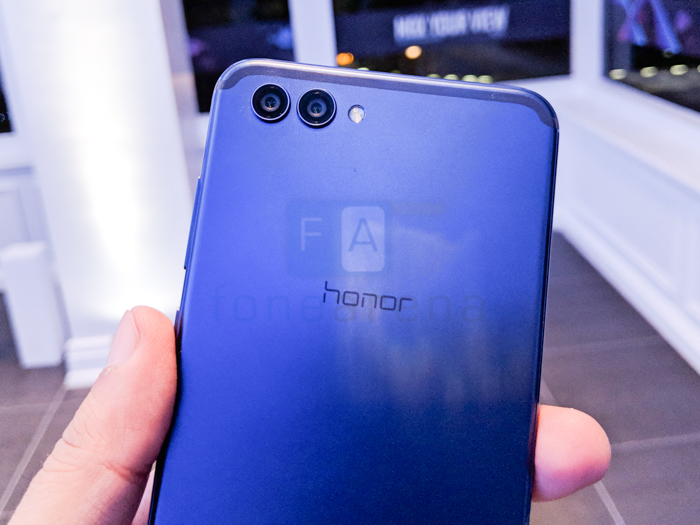 While we didn’t get to see most of the functions that Honor talked about with respect to the NPU, we did briefly test out the camera. In our limited testing, the camera certainly holds up to the best in its category. Be it sheer optics or the combination of AI as claimed by Honor, the camera seems to be on par with the likes of the OnePlus 5T. More on this once we get our review unit in. The portrait mode, especially using the selfie camera wasn’t quite as impressive as the Pixel 2 for example but since this is dependent on AI processing, we’ve been told that we can expect to see a lot of improvements by the time the phone ships. 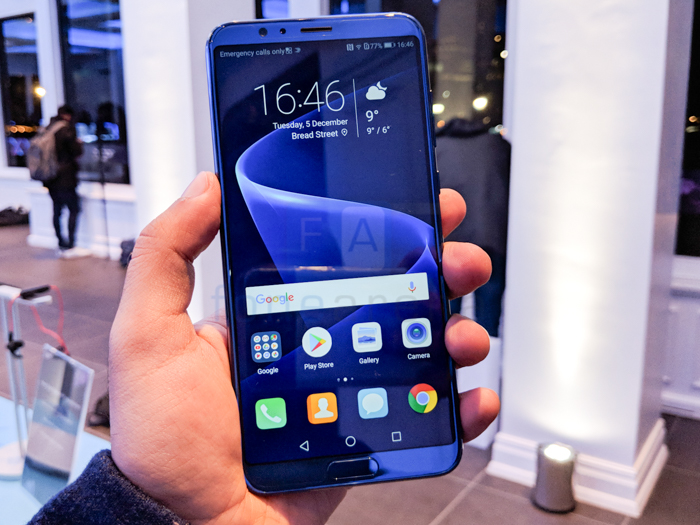 All said and done, it appears that Honor has managed to create a very compelling affordable flagship. We like the build quality and especially the gorgeous blue color. At first glance, it doesn’t appear that performance will be a concern and the 3750 mAh battery should easily hold up over a day of use. The camera too seems to cut above its weight. The big question, of course, is the pricing. Globally the phone has been priced at 499 Euros but Huawei says that the best pricing for the device will be in India. If it manages to hit the same price point as OnePlus 5T or perhaps even lower, we could see a lot of competition in the market.

Disclaimer: Honor paid for the journalist’s flight and stay in London for the duration of the event.