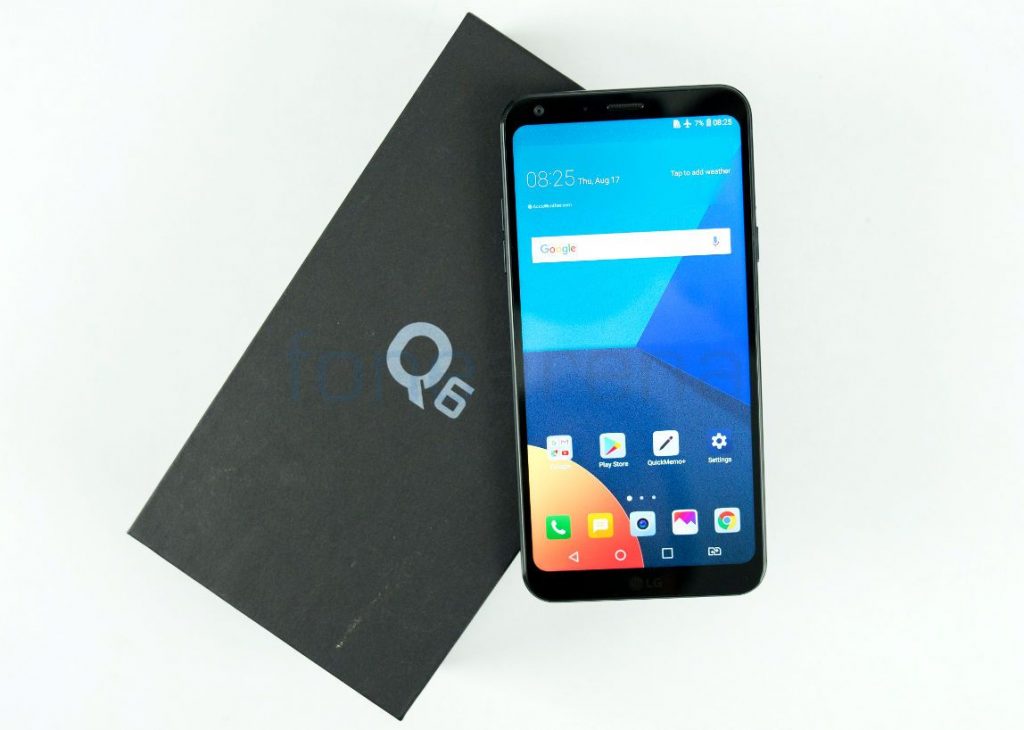 After the critically acclaimed flagship smartphone, LG’s plan to cater the Indian mid-range market came in the form of LG Q6 with Full vision display at a considerable price point.

To give a heads up about the mobile, it has a 5.5-inch FHD+ FullVision display with 18:9 aspect ratio, has facial recognition and military grade durability. Considering the decent specification at a reasonable price, is LG Q6 a true winner? Let’s find it out. 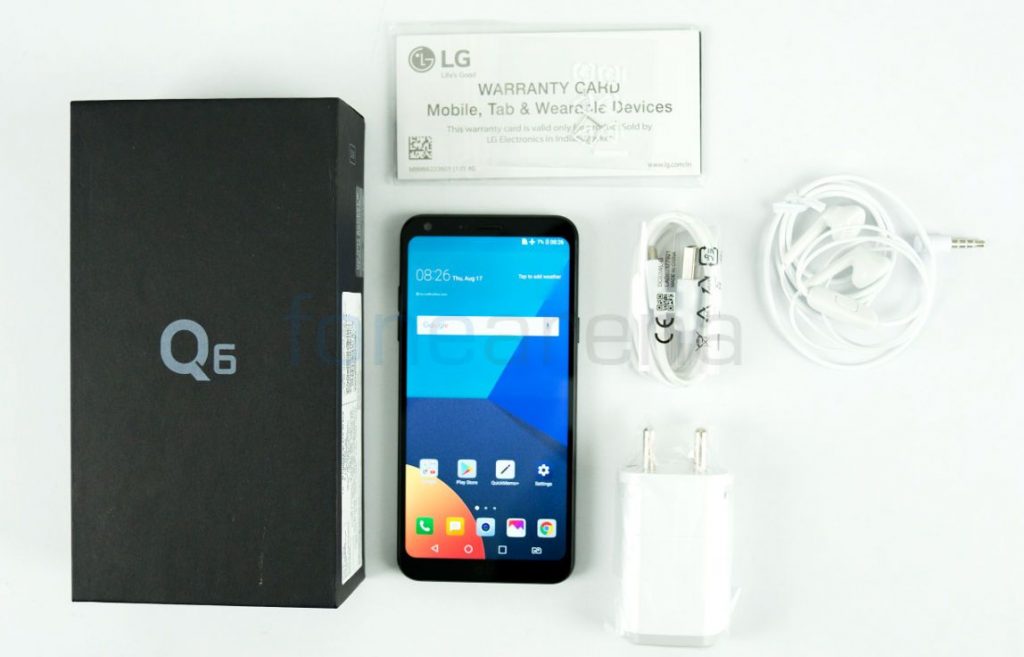 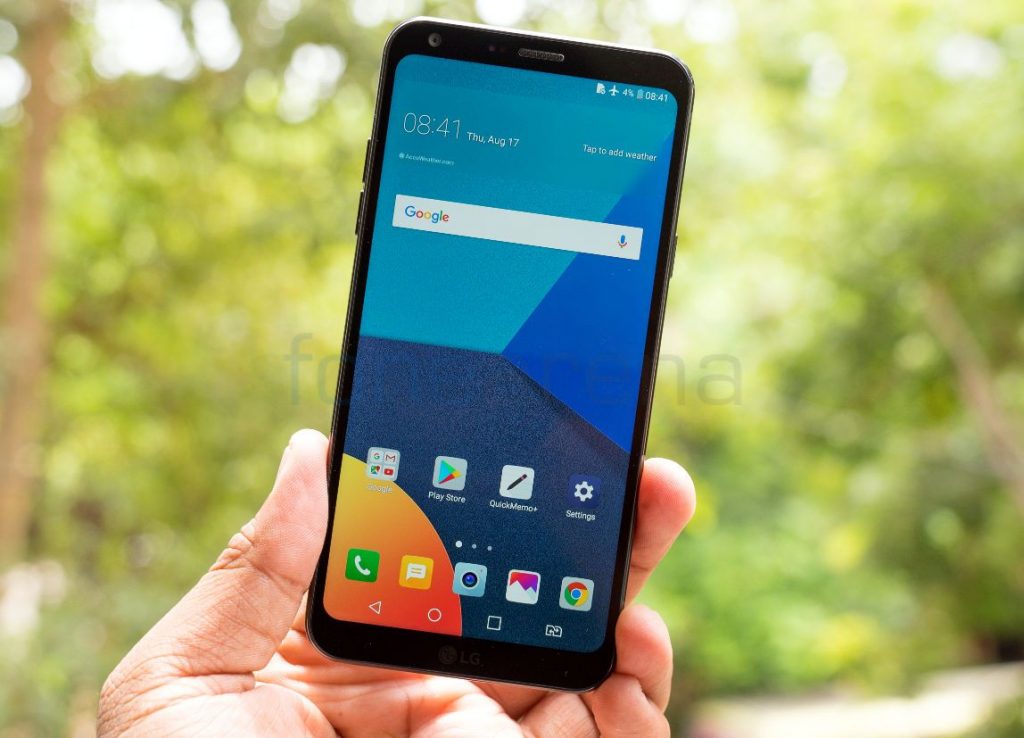 The LG Q6 sports a 5.5-inch 18:9 FHD+ FullVision display with a resolution of 2160 x 1080 pixels which translates to a pixel density of 439ppi. It is mostly bezel-less just like its bigger brother G6, flat and modern as well. The color reproduction and contrast levels are on par with LG G6. The display is crisp and vibrant with good enough brightness to read comfortably under sunlight conditions. It also has Corning Gorilla Glass 3 protection.

Talking about the design, the LG Q6 is just a downsized version of LG G6 in terms of design, specification, and the whole lot. The mobile measures 142.5 x 69.3 x 8.1mm and weighs 149 grams. It has a ultra-strong 7000 series aluminum frame and comes with a unibody design. As per the company, it has passed MIL-STD 810G to withstand temperature extremes, rain, humidity, sand, and dust for use by the United States military.

To confirm this, we have conducted a drop test and the mobile passed with flying colors, if not for a few dents on the sides. After the test, the display remains intact, as well as the rear panel. We can assure that the unintentional drops from your pocket won’t be damaging your phone. Another thing we like about the Q6 is its compatibility. For a 5.5-inch phone, it looks and feels too compact. Sometimes, you won’t feel your mobile in your jeans pocket. 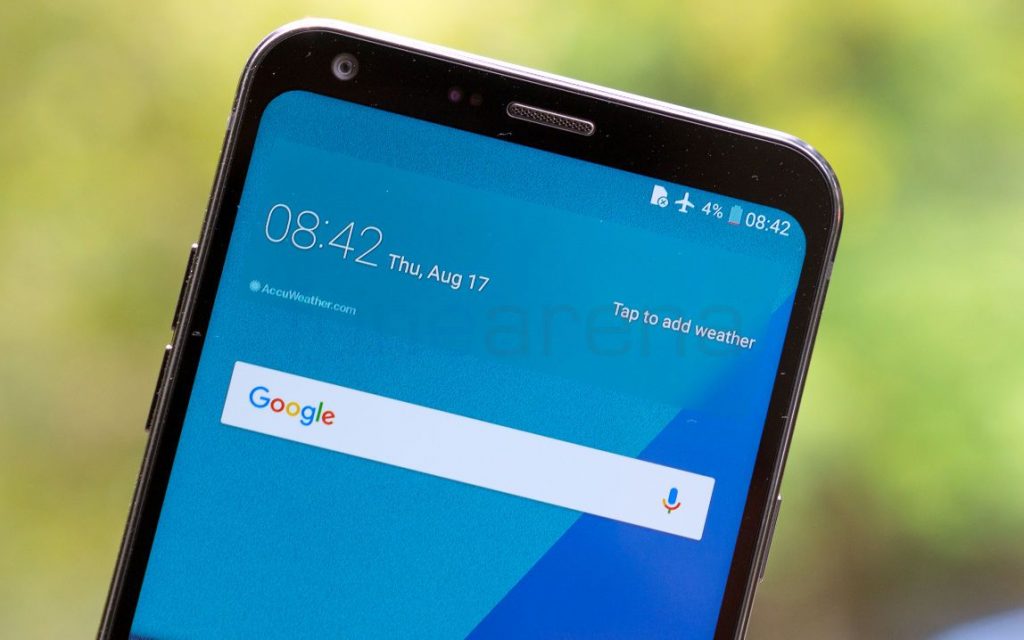 Moving on to the button placements, there is an earpiece on top along with a 5MP front-facing camera, 100-degree wide-angle and the usual set of sensors. The phone also has a magnetic sensor (magnetometer) and gyroscope so you can use the phone with VR headsets but it lacks notification LED. 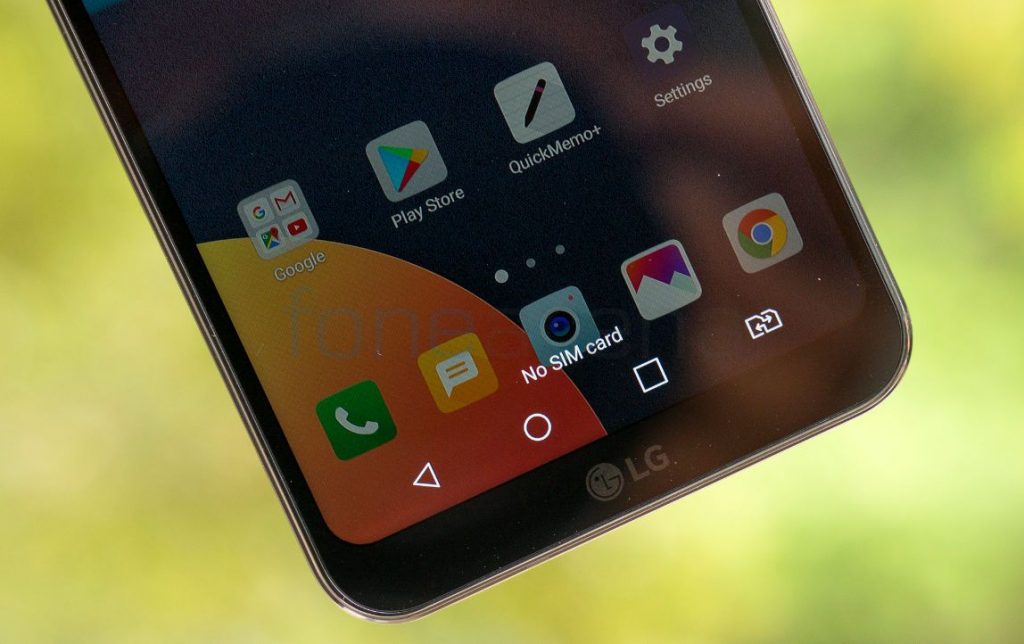 Below the display is the LG logo with no capacitive buttons, as it has on-screen touch buttons.

The right side of the phone houses the power button and antenna cut out, while the volume rockers, antenna band cut out, microSD card slot, and Dual SIM slot is present on the left. 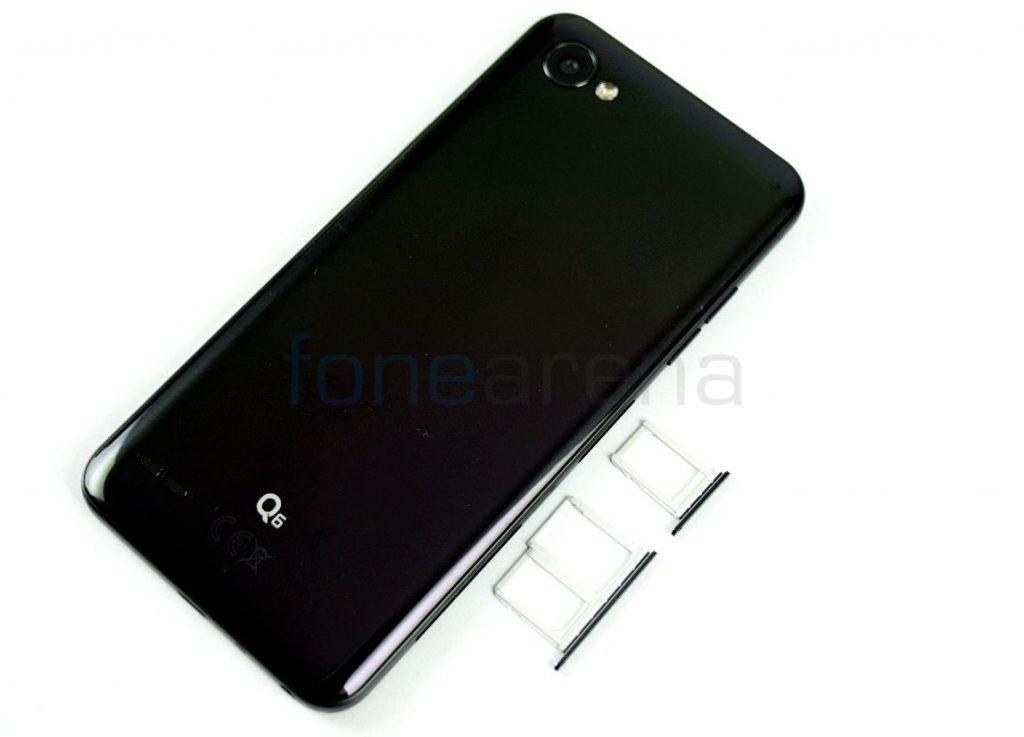 This time LG has offered dedicated SIM and microSD card slots, instead of hybrid SIM arrangement in more of the phones with a unibody design.

A secondary microphone and antenna bands are present on the top and a 3.5mm headphone jack, micro USB port, and primary microphone are present at the bottom. One the back we have a 13MP camera with single LED flash and loudspeakers with Q6 branding is present at back. In this device, LG has replaced the fingerprint scanner with Face recognition technology. To my surprise, it worked well most of the time, if you keep it in an optimal distance as mentioned in the company. Having said that, I prefer fingerprint scanner over this due to the time it takes to unlock the device, 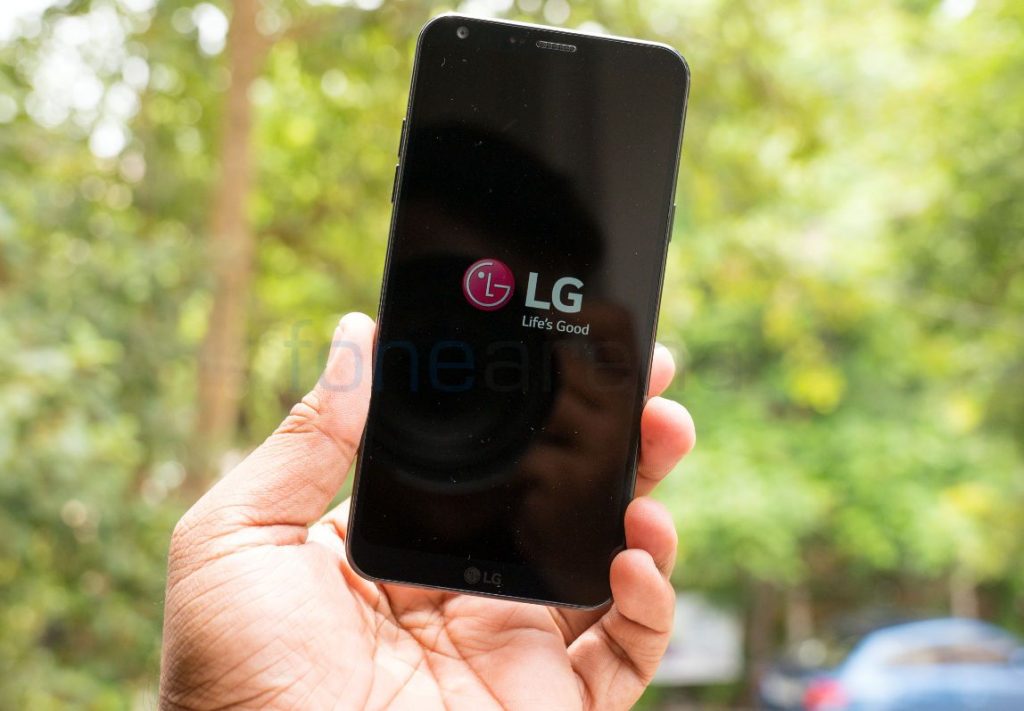 The LG Q6 is powered by an Octa-Core Snapdragon 435 Mobile Platform (4 x Cortex A53 1.4GHz + 4 x Cortex A53 1.1GHz) with Adreno 505 GPU taking care of graphics department. For casual day-to-day usage, LG Q6 performs very well without any major lag or hang. But, at times, we felt a minor lag while typing in WhatsApp, which shouldn’t be an issue. When it comes to multitasking with heavy apps (Facebook, Google Maps, Nike Run Club) the fluidity tends to lower a bit. Having said that, this processor is not made for heavy gaming. Check out some synthetic benchmark scores below. 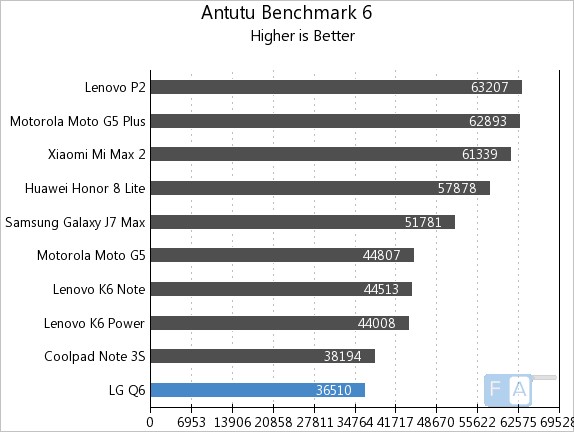 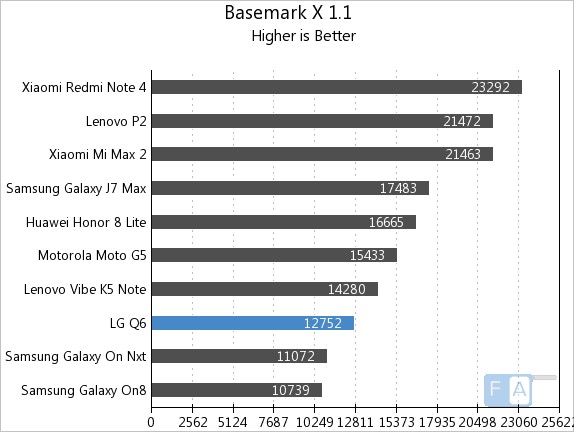 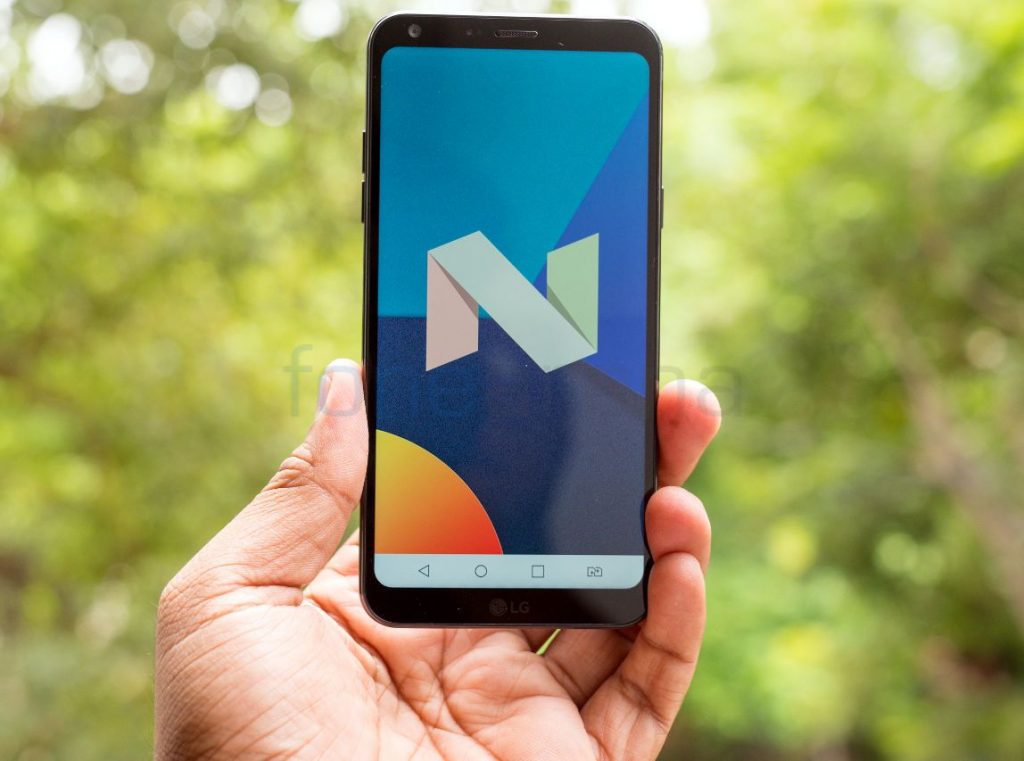 The LG Q6 runs on Android 7.1.1 Nougat out of the box with Android Security patch from July 1, 2017. By default, LG gives app drawer a miss in Q6 and displays all the apps on the home screen itself.

In case, if you like to use the app drawer, you have the enable/download it This device gives users an option to change the navigation buttons that appear at the bottom. Apart from the home, return and multitasking buttons, you can add two more to the row which can be a notification toggle/Capture+/Network change.

There is also an app scaling option that adjusts the screen size of the downloaded apps. You can also adjust the display size according to your preference. To avoid eye strains, we can turn on the Comfort view option that comes in four options — Low, medium, high and Black and White. Moreover, the notification drawer is customizable as well and has a two-page layout. Additionally, it also has Smart Doctor app, to optimize the phones performance, battery and even tests hardware as well. The LG Q6 comes with LG’s own native apps and Google apps including Maps, Gmail, Duo and much more. 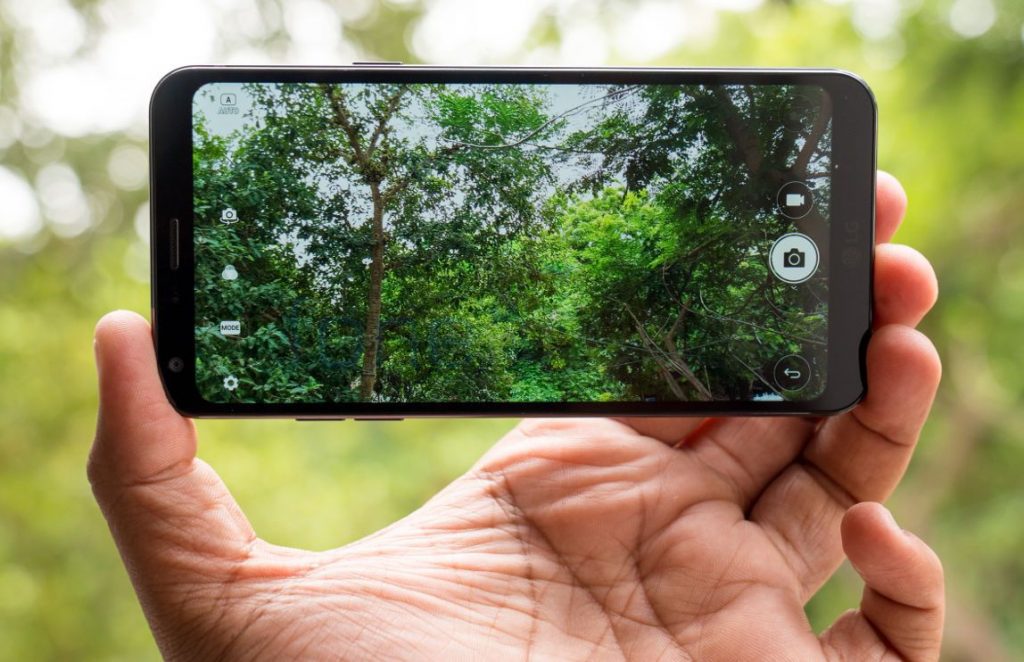 The LG Q6 sports a 13MP rear camera with LED Flash
5MP front-facing camera with 100-degree wide-angle lens for group selfies. The camera UI on the LG Q6 is standard as other LG devices. We get controls on one side including settings, modes (Auto, Panorama, and Food), filters, camera change toggle, flash and current mode. On the other side, we have back option, shutter button, video button and gallery as well. 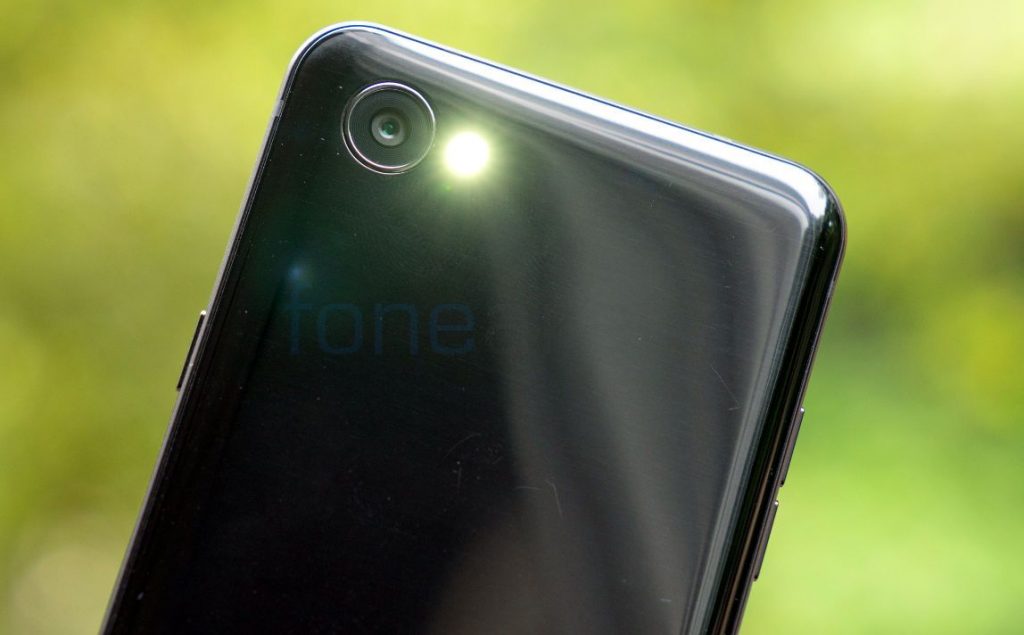 In a well-lit situation, the photos tend to be decent, on both rear and front camera. Having said that, we had issues when it comes to low light performance. Well, for a mid-ranger, LG Q6 performance is pretty decent. The front facing camera capable of taking both regular and wide-angle selfies. When it comes to videos LG Q6 can only record video at up 1080p Full HD. You can turn on the steady recording if you want to reduce the blur in your device. Here are some sample pictures we shot from the device. Do take a look and decide for yourself. (Click the image for full resolution sample). 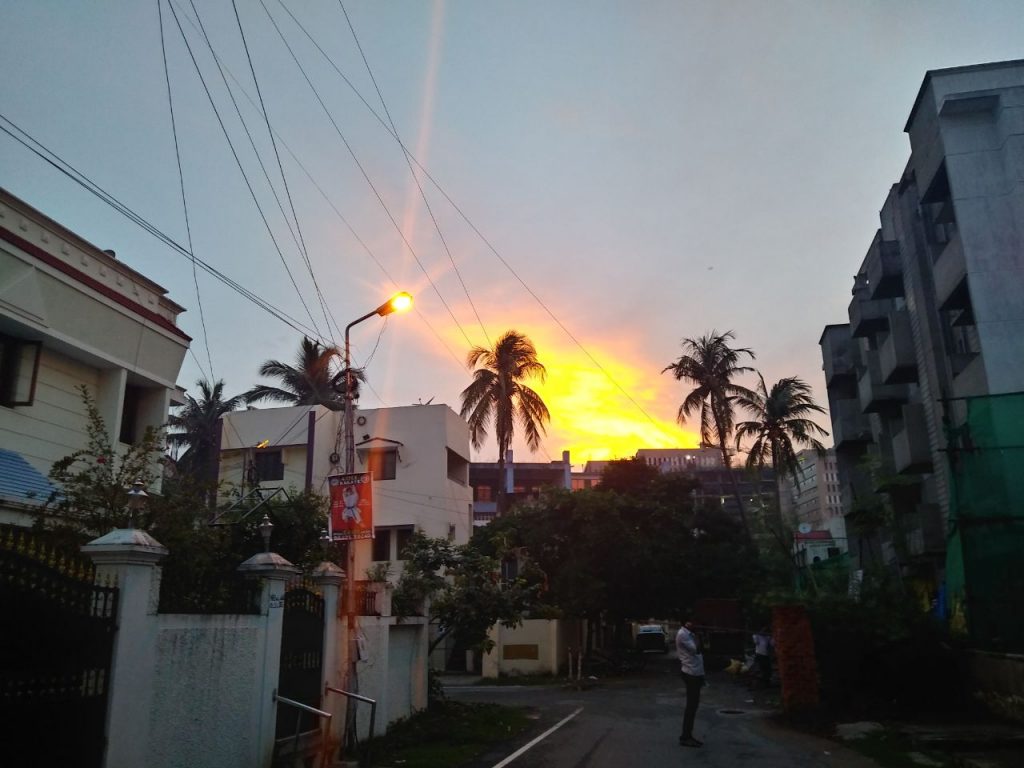 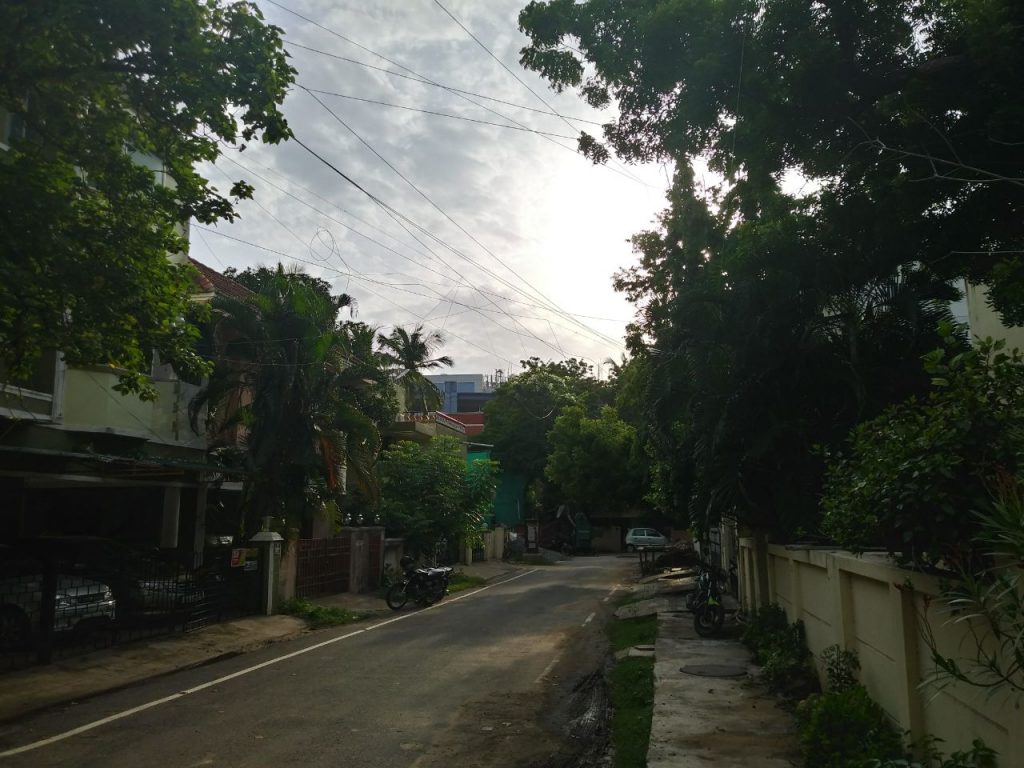 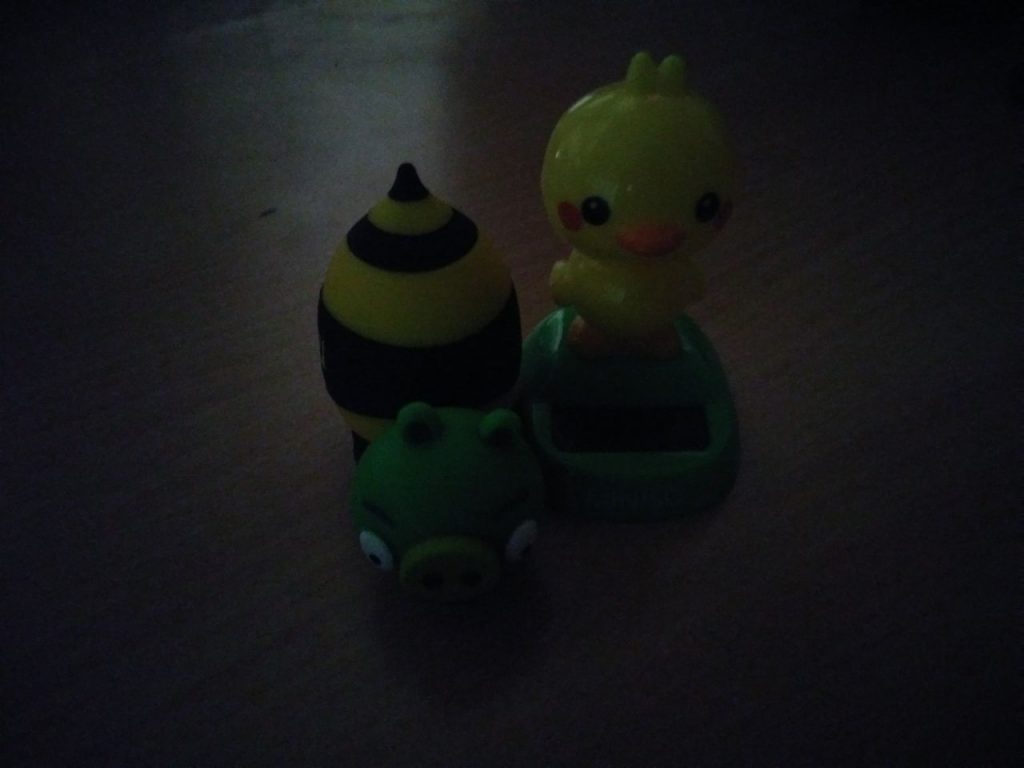 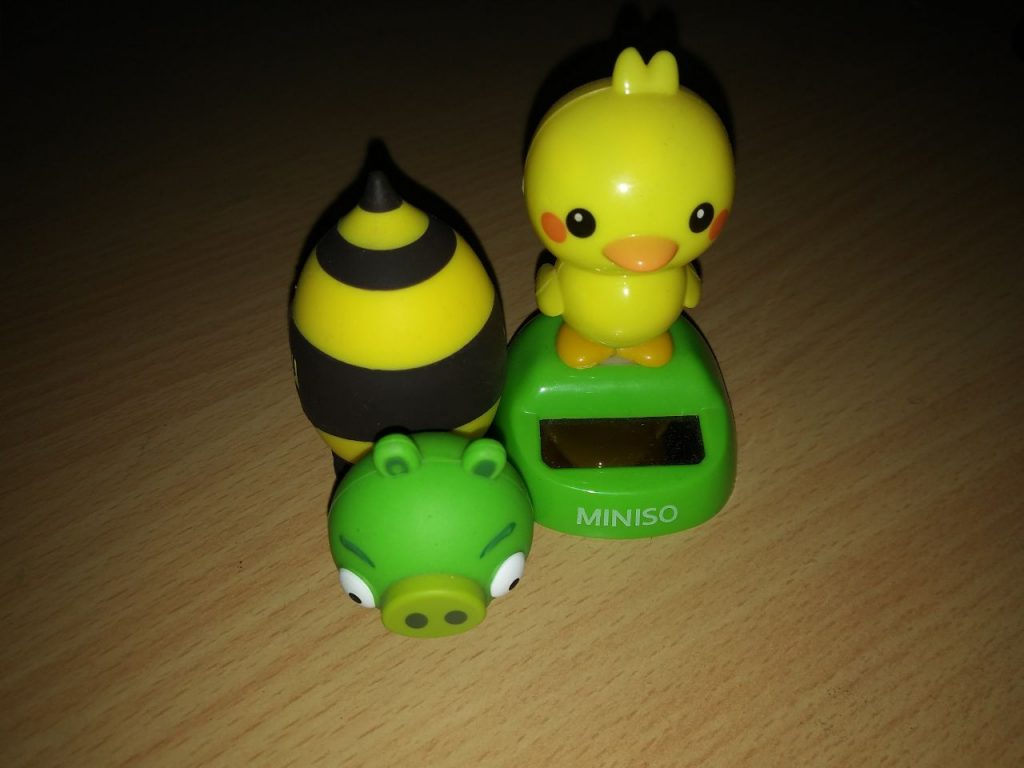 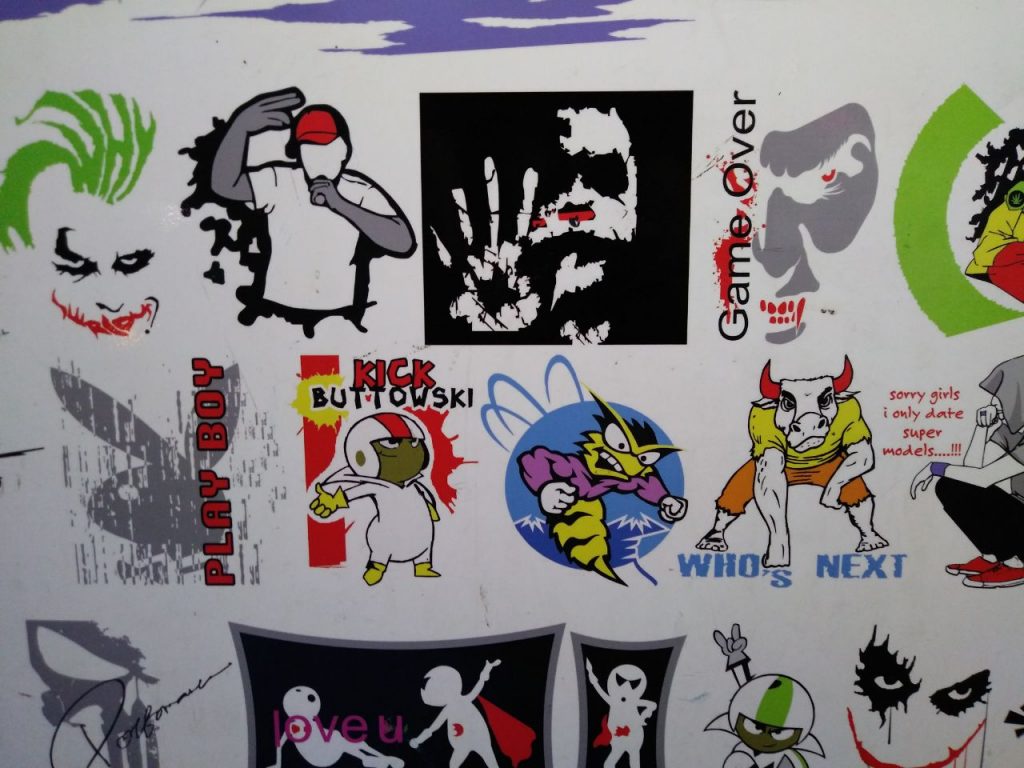 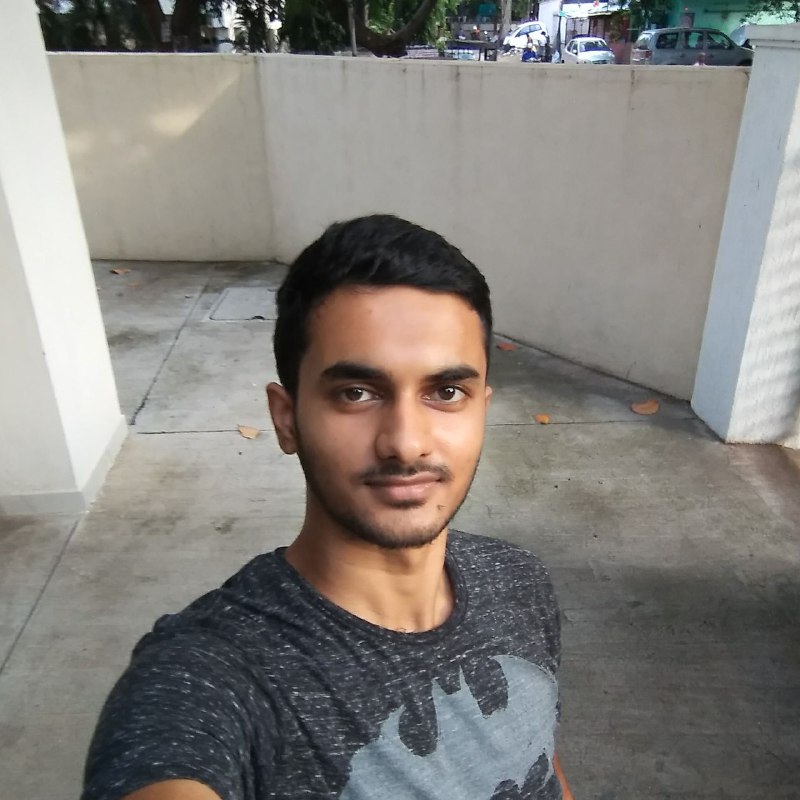 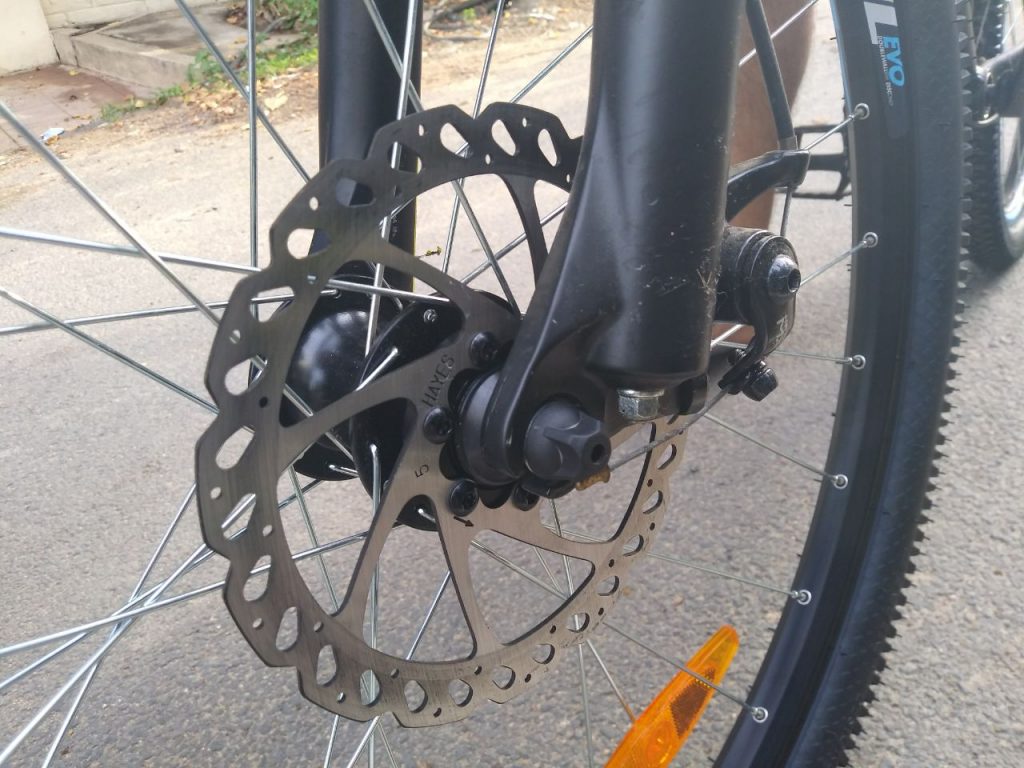 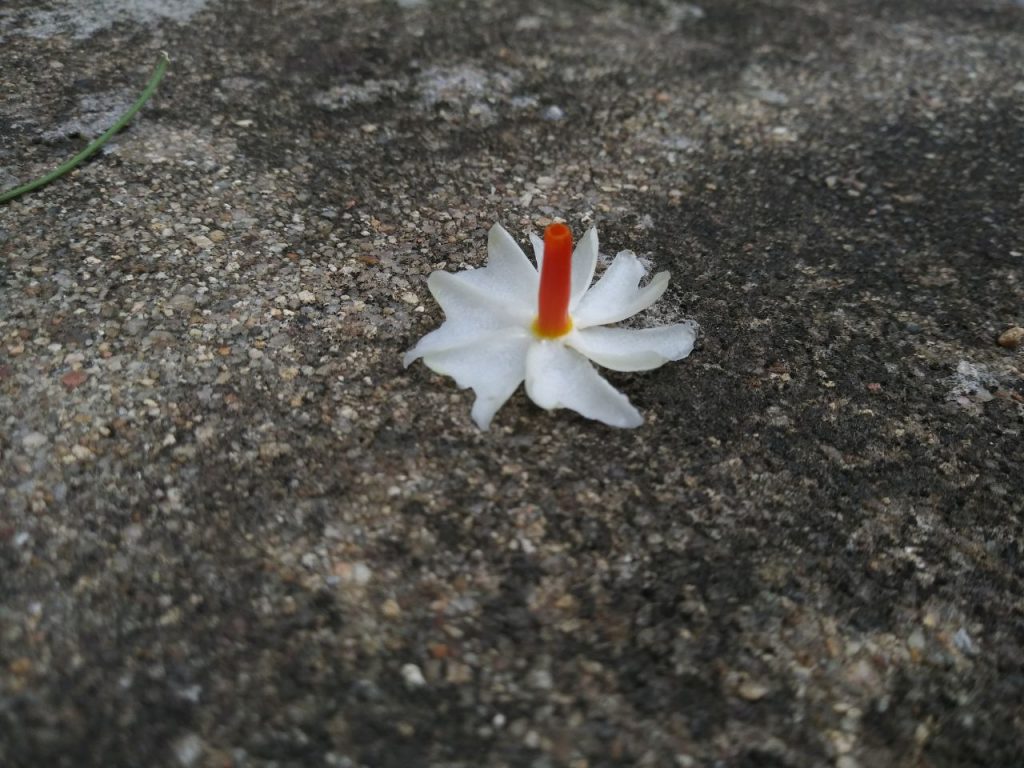 The dialer is large and easy to use. You can enter a specific number or search amongst your contacts. It also comes with built-in call screening and number blocking. The call quality is quite good in the earpiece and loud-speaker. The loudspeaker is below average when your environment is too noisy. In terms of connectivity, the LG Q6 supports option including 4G VoLTE for Reliance Jio, WiFi 802.11 b/g/n, Bluetooth 4.2 LE, GPS / GLONASS, USB OTG. 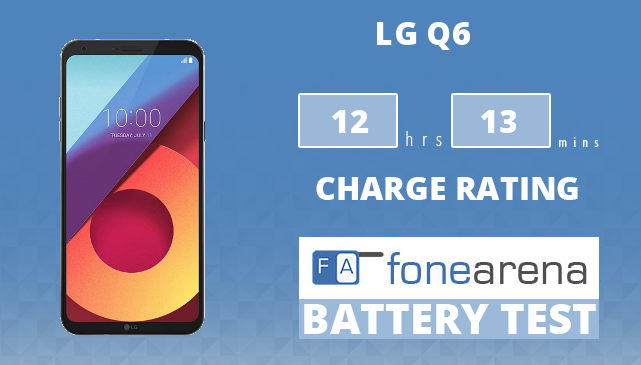 The LG Q6 is juiced with 3,000mAh built-in battery and offers a day of usage with ease. In our One Charge Rating, the LG Q6 achieved 12 hours and 13 minutes, which is just average. It also has battery saver that reduces brightness and vibration and restricts some apps in the background to improve battery life. The game battery saver adjusts video resolution or frame rate to save battery life. 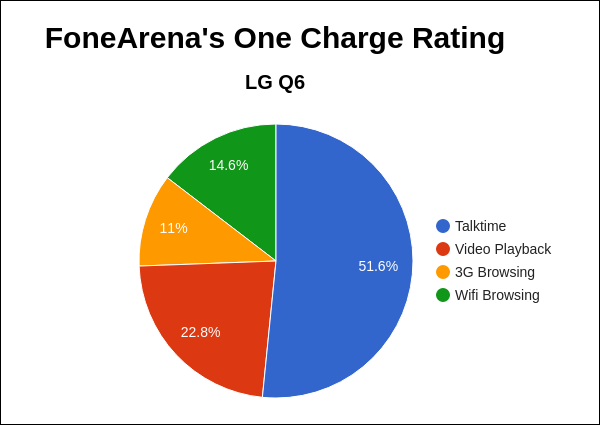 Check out the complete set of battery life test results of the Q6 here. 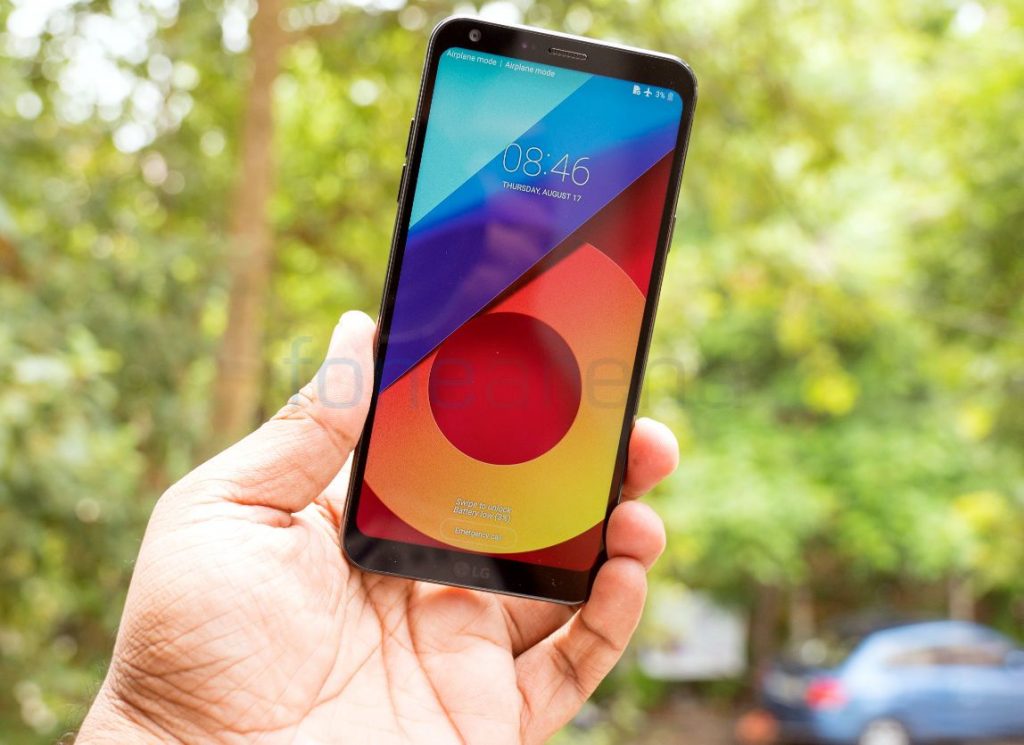 Overall, LG Q6 is an above average device packing nothing special in it if not for FullVision display. With Q6, LG has tried too hard to make a dent in the mid-range market but failed. At a price of Rs. 14,990, the LG Q6 lacks fingerprint, has a scratch prone plastic back and average camera. Unless and until, if you don’t mind spending Rs. 15,000 for a phone with a large screen in a compact size, you can go for LG Q6. If not, you have lots of options including, Moto G5 Plus, Honor 6X, Lenovo P2 and more.

The LG Q6 comes in Astro Black, Ice Platinum and Terra Gold colors in India, is priced at Rs. 14,990 and is available exclusively on Amazon.in.