Nokia X3 Touch and Type is the first touchscreen QWERTY + Keypad S40 phone from Nokia. It packs a 5 MP Camera , 3G, WiFi and a lot more. 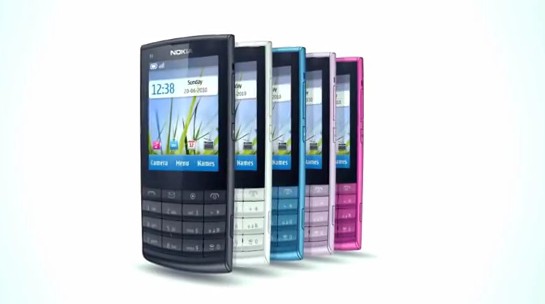 Espoo, Finland – In a move to continue driving innovation in its market leading mobile phone range, Nokia today unveils the super slim Nokia X3 Touch and Type, with a unique combination of a touch screen and traditional 12 button phone keypad.  As Nokia’s first ‘Touch and Type’ phone, the Nokia X3 allows people to tap quickly on the bright color touch screen, as well as enjoy the familiarity of the full keypad for quick fire text messages and phone calls.  Expected to be on sale in the third quarter, the Nokia X3 is expected to retail for approximately EUR 125, excluding taxes and subsidies.

“With the Nokia X3 we are giving consumers the best of both worlds by combining a touch screen and a keypad in an affordable device. We have given people a larger screen with clear icons and menus plus kept critical keys such as the send and end keys. We’ve also added dedicated function keys for important links like music and text messaging,” she said.

“We have designed the Nokia X3 to be a touch and type device because typing is ideal for SMS and social networking where fast and frequent input is needed, while touch is ideal for functions such as setting alarms, smooth browsing and controlling applications like music and games.

“Our research tells us consumers who have invested years in becoming fast one-handed, one-thumb texters want to maintain their speedy edge for SMS, chat and instant messaging – yet enjoy the benefits of touch as well,” continued McDowell.

With its sleek and modern design coming in at a very thin 9.6mm – making it one of the slimmest Nokia phones ever – the Nokia X3 slips easily into the purse or the pocket, and looks the part with its brushed aluminum back cover which will come in five vibrant colors designed to suit any mood or wardrobe.

Despite its size, the Nokia X3 is jam-packed with features including 3G, WLAN, a music player and an FM radio.

Lovers of the snapshot and social networks will enjoy a great 5 megapixel camera with 4X digital zoom that can take both still and video images.

With a gentle glide over the touch screen people can go online and get access to many services including thousands of apps from Ovi Store. In certain markets, the new phone will also be available with Ovi Music Unlimited, enabling the owner to access a virtually limitless range of the latest hit music that can be stored on the available 16GB memory card.

The Nokia X3 – affordable and accessible touch and type which is simple-to-use and beautifully designed. The Nokia X3 Touch and Type sits alongside the Nokia X3-00, a slider with strong music functionality, which was launched in September 2009.