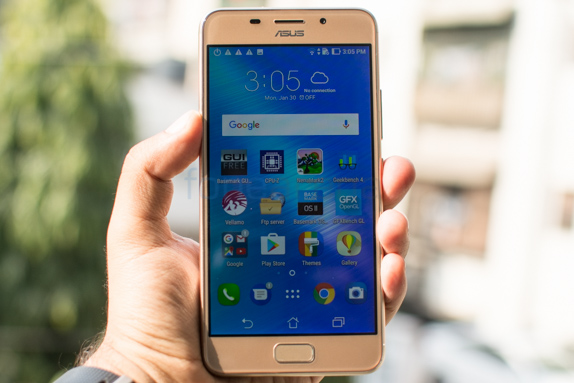 The Zenfone 3s Max marks yet another entry into the increasingly crowded Zenfone series of devices by Asus. We recently observed the launch of the Zenfone 3 Ultra, the Zenfone 3 Deluxe, the Zenfone 3 Zoom, the Zenfone 3 Max, all of which brought something unique to the table. Between the Max and the all new Zenfone 3s Max, you get a much larger battery, a lower resolution display and a MediaTek processor. How does this bode for user experience and does it warrant an upgrade so early in the product cycle? We find out in our review.

Keeping in line with the latest fashion trends, the Zenfone 3s Max too sports a metal uni-body build with gold being one of the key colors here. The front fascia of the device is mostly just the 5.2 inch display with a proximity sensor, ambient light sensor as well as the front facing camera above it. 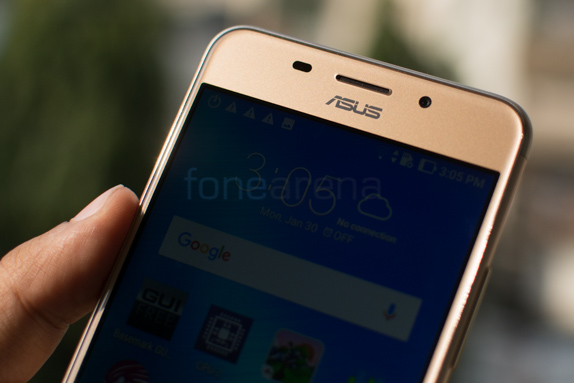 Commonly seen on a lot of Asus phones, the front glass display gently curves over at the edges and merges into a raised edge. The edge helps enhance the grip of what we found to be a pretty slippery device. 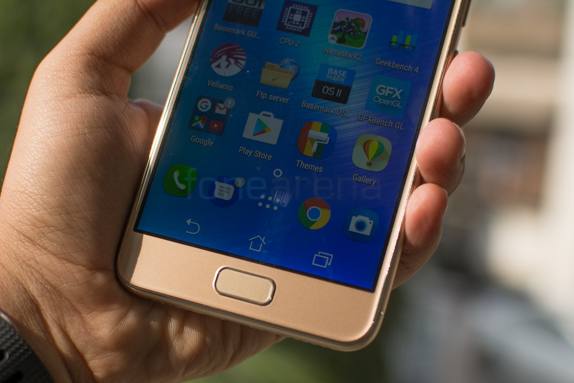 Below the screen lies the fingerprint scanner that we observed to be a fair bit slower than the competition. The scanner is also NOT always on and so you’ll have to first press down on the power button and then tap the scanner to unlock the phone. As an additional function, the fingerprint button doubles as a home button however there are no capacitive buttons flanking it. Instead, you’ll get the back, menu and home key as on-screen controls.

Over on the right hand side, the Zenfone 3s Max sports a volume rocker as well as a power key. Meanwhile the left side has the hybrid SIM card slots. The audio jack and microUSB ports are placed at the top and bottom of the phone respectively. Made of metal, the button feedback is fantastic and we loved the feel of the button movement. 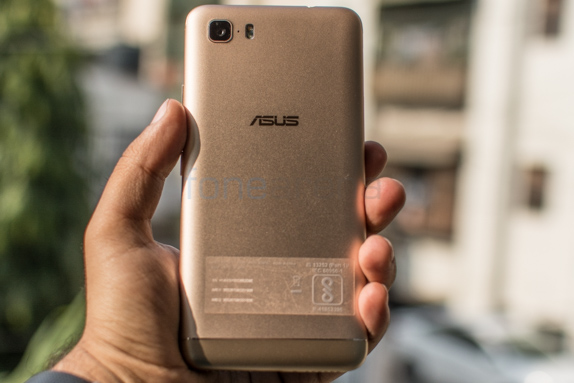 Flip over the phone and you’ll observe the camera module placed at the top left corner accompanied by a dual LED flash. A plastic end cap along the bottom edge hides away all the antenna equipment. Overall, the Zenfone 3s Max comes off as a very robust device which feels very solid in the hand. The weighty feel might feel a bit too much for some but personally, the added heft just made it feel more premium.

On the software front, the phone now runs Android 7.0 Nougat but the heavy-handed Zen UI is still around. Zen UI 3.0 is both feature rich but also extremely ham handed with its approach to striking a balance between performance and experience.

The lockscreen includes the usual time, date and shortcut for the camera. Additionally you’ll also find three shortcut icons that can be customised to link to whatever you want. Swipe up and you’ll be dropped into the homescreen where the icons are arranged in a grid alongside other widgets. A persistent shortcut bar can be found along the bottom edge and tapping the shortcut button drops you into the app drawer where you’ll find the full list of installed apps.

It is possible to use themes to further customise the look and feel of the interface. Within the app drawer, Zen UI offers a number of ways to sort out your applications. As a whole, we like the customisability of the interface but often it comes across as just a bit sluggish with performance trailing user input. The number of pre-installed apps too hasn’t changed much and this remains one of our biggest pain points with the interface.

The Zenfone 3s Max is powered by a MediaTek MT6750 Octa Core chipset. The processor has been clocked at 1.5Ghz and is paired with 3GB of RAM. On a while, the performance is just about satisfactory and while regular UI operation remains smooth for the most part, games and heavy applications leave you wanting. Start up for games and heavier applications always took a bit longer than you’d expect and with heavy multitasking, the interface always felt like it was catching up to user interface. In its favour, we hardly ever observed the phone heating up to an uncomfortable degree.

That said, we would have vastly preferred a Qualcomm processor here which offers much better performance at an equivalent level. We’ve included some benchmarks below to give you a better idea of how the phone performs against the competition. 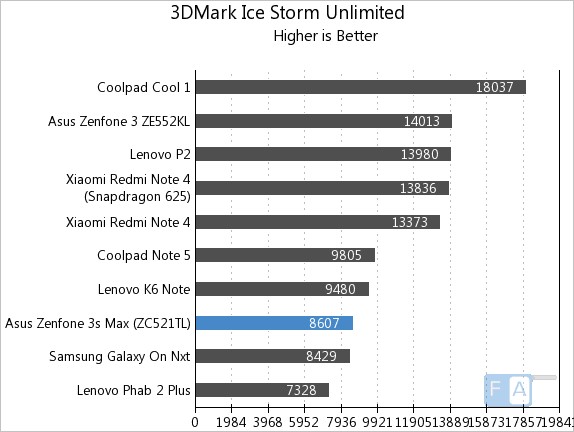 The Zenfone 3s Max scores 8607 points in the 3DMark Ice Storm Unlimited benchmark placing it in the lower end of our test bench. 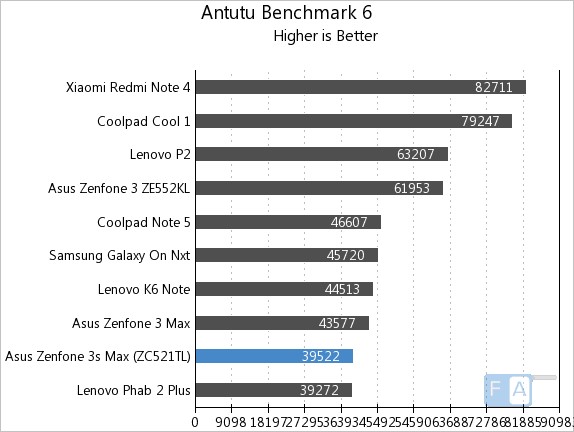 In the AnTuTu Benchmark, the phone scored 39522 points. In comparison, the Redmi Note 4 scored 82711 points ranking far ahead. 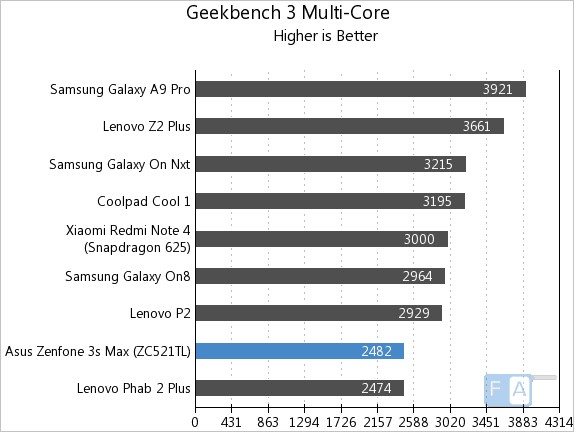 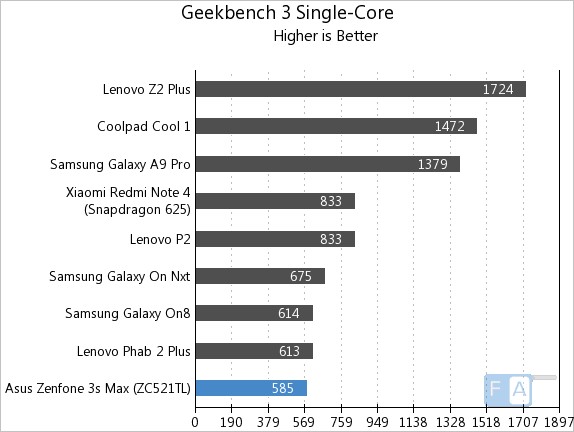 Finally, in the single core Geekbench 3 benchmark, the phone scored the lowest points in our test bench and ranked well below the competition.

The display is a 5.2 inch 720p panel. Okay, so this certainly isn’t the most dense panel around. Most of the competition has moved on to 1080p panels even in the entry – mid range segment. However, there’s a point to be made about the battery life gains to be made from a lower resolution. 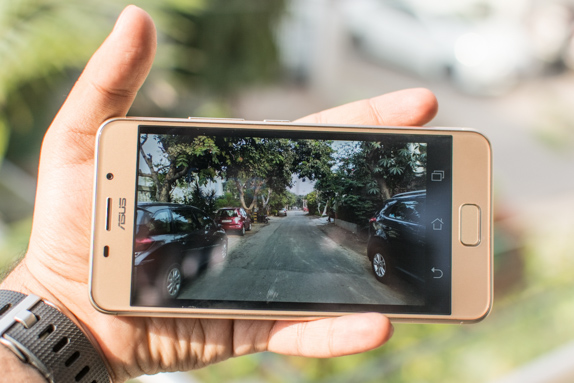 For a phone so focussed on getting extreme battery life, we’d wager that it is a good tradeoff and for what it’s worth, the panel is quite good and we never really noticed the lower resolution in day-to-day use. Sunlight visibility is decent and the color shift is minimal.

The phone comes equipped with a 13MP rear facing camera and a dual LED flash. You do get Phase Detection Auto Focus built-in but as you’ll find out further ahead, it didn’t seem to make much of a difference. We observed the photography capabilities to be decidedly average. Even in great lighting, the photographs were a bit washed out and lacking on details. Despite the presence of PDAF, getting a focus lock was a herculean task for the device. 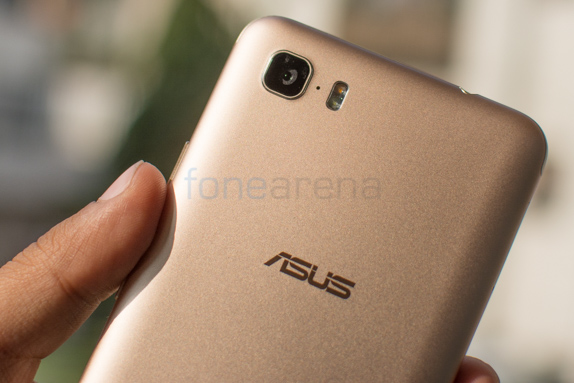 Not quite macro shots but the Zenfone 3s Max did do better with close up shots and images usually proved to be sharp though lacking in details on pixel peeping. The 8MP front facing camera produced especially grainy shots and we’d advice using it for selfies only if there’s no other device handy. 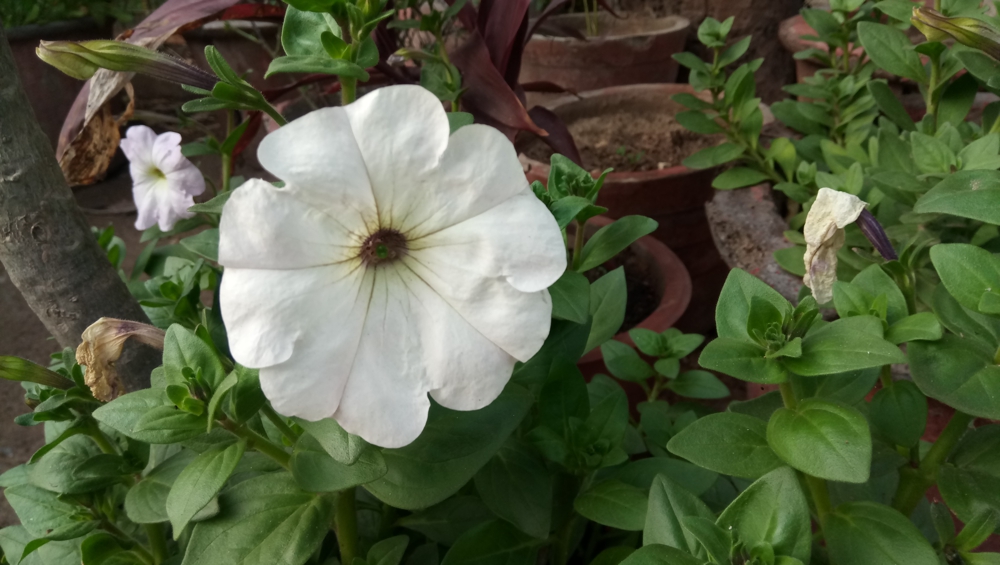 Connectivity options on the Zenfone 3s Max are bog standard and include the usual 4G VoLTE, WiFi 802.11 b/g/n, Bluetooth 4.0 and GPS support. Storage onboard is 32GB of which approximately 23GB is available at first boot. You can expand storage via the microSD card slot but that does mean giving up on the secondary SIM card since the phone employs a hybrid SIM solution. USB OTG is also supported to further expand storage via a flash drive or to connect accessories. As an aside, the Zenfone 3s Max can reverse charge other devices should you ever need to.

The pièce de résistance of the Zenfone 3s Max is of course it’s battery. The phone employs a massive 5,000 mAh battery built into a compact shell. Smaller than a lot of its competitors, the Zenfone 3s Max obliterates the battery life delivered by other devices and is one of the few in its category with such a huge cell built into it. With multiple email accounts, social media accounts, phone calls and well, regular use, we could reliably get a day and a half of use from the phone. Two days of use wouldn’t be too hard either with more frugal use.

If battery life is what you want, the Zenfone 3s Max presents one of the best options on the market. There’s not many other options with a 5,000 mAh unit built-in and especially so with such a compact body. The design too is visually appealing though a bit understated. However, we weren’t very satisfied with the performance which always seems to be catching up. Additionally, we found the camera to be rather disappointing. All this makes the Zenfone 3s Max a one trick pony. Priced Rs. 14,999, the Zenfone 3s Max is a bit of a tough sell and you have multiple other options with the Xiaomi Redmi Note 4 particularly coming to mind unless the biggest battery on the market is your primary concern.