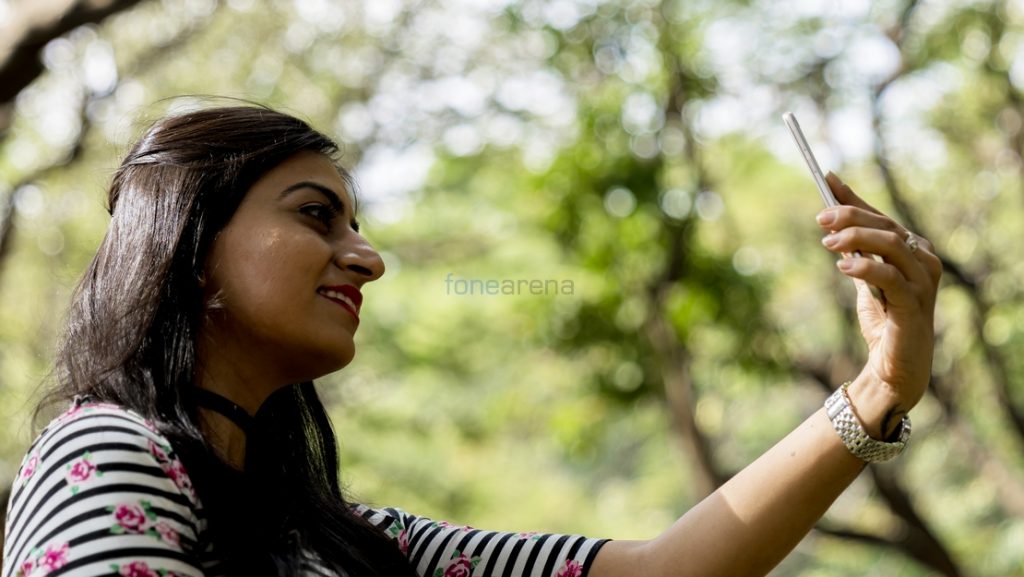 It is common misconception that more Megapixels mean that the image quality offered by a particular smartphone is better than the other. While, it is true to some extent that having more Megapixels will produce more detailed images; however it is not the only parameter in deciding the perfect image quality. 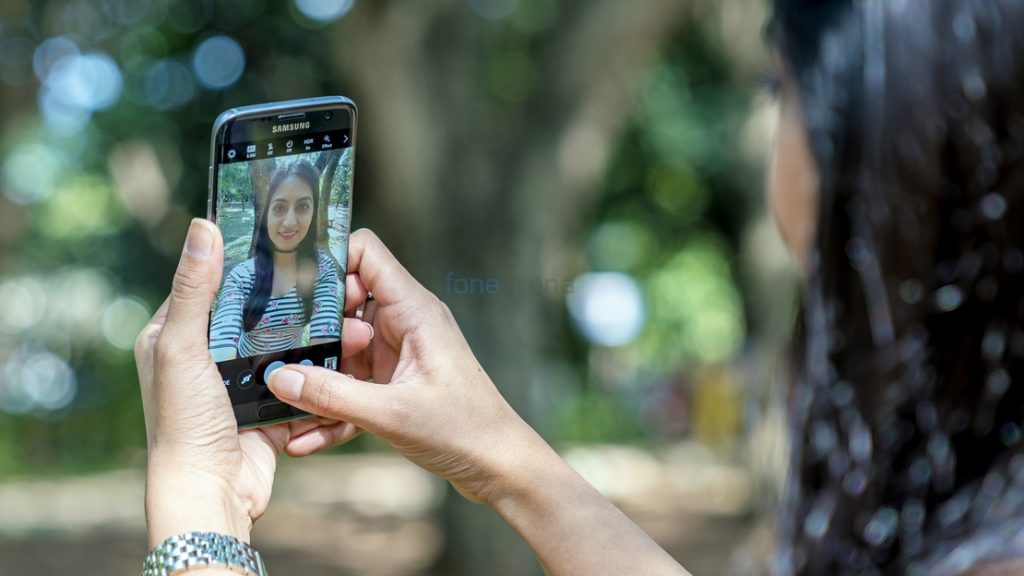 There are other factors that make a smartphone camera smarter than the other. For hardware, parameters such as the sensor size and the aperture of the lens are important. For software, photo-processing algorithms is another essential factor to influence the quality of photos. 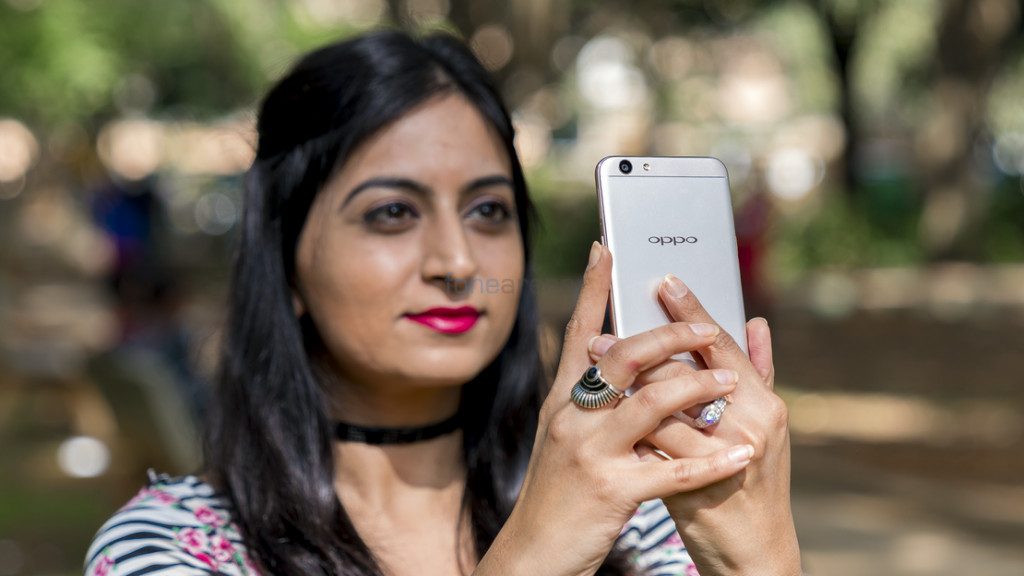 There are some brands like Samsung, Apple and OPPO, who understand all factors involved in producing the perfect image. Which is why their phones like iPhone6s, iPhone7, Samsung S7 series and OPPO F1s are built with great care and involvement of other important factors than just high resolution, to achieve the best image quality. 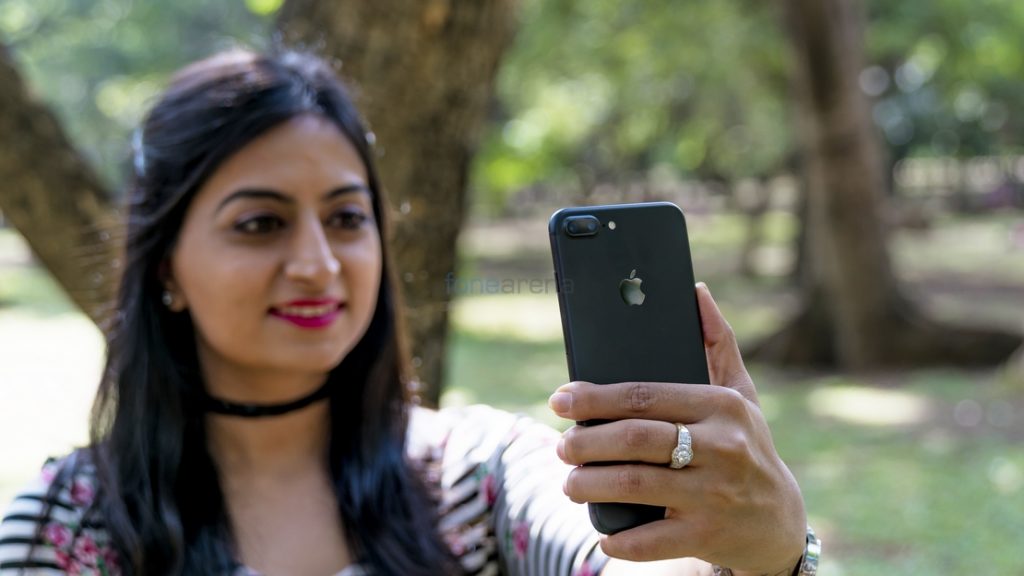 SENSOR & PIXELS : Many smartphones these days combine high Megapixel count with small sensors that result in very noisy and unattractive images, especially under low light. The Samsung Galaxy S7 series has a 5 Megapixel camera while the iPhone 7 series has a 7 megapixel camera. Both these phones have good front facing cameras but could’ve benefited even further with the help of a larger sensor. OPPO F1s also has a 1/3.1 inch size customized sensor with its 16 Megapixel front camera sensor. The customized sensor of the F1s arranges pixels in a unique pattern to let in more light thereby producing better images that are rich in quality and brightness. Customized sensors are kind of rare find on smartphones and it becomes all the more so when the camera in question is the front facing camera. As a result, photos taken from OPPO F1s as a result are clear, bright and strikingly rich in colour. 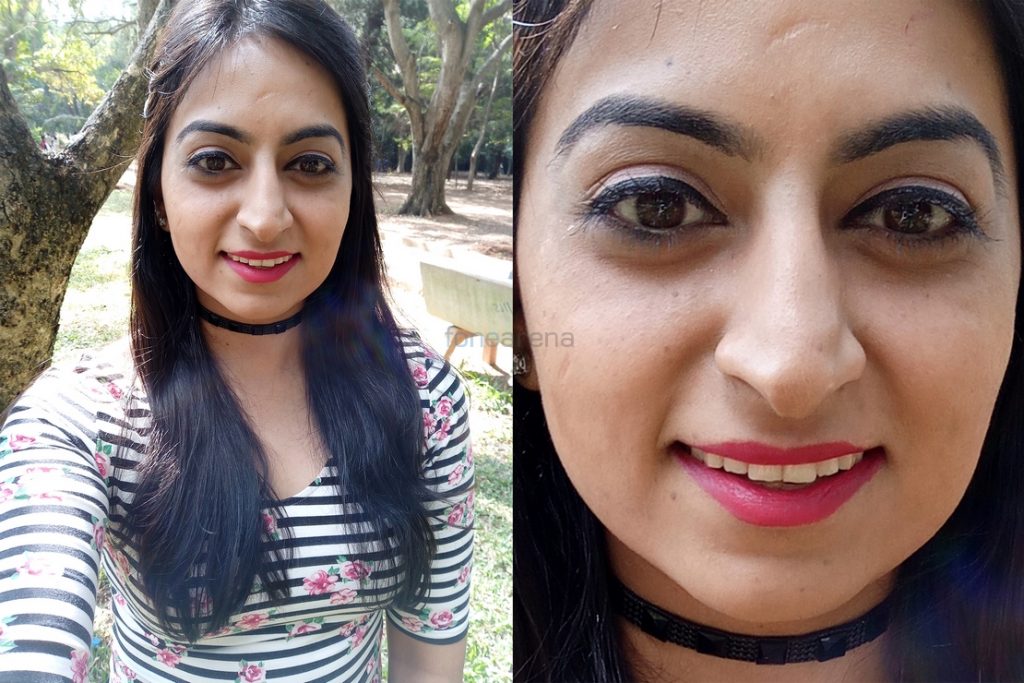 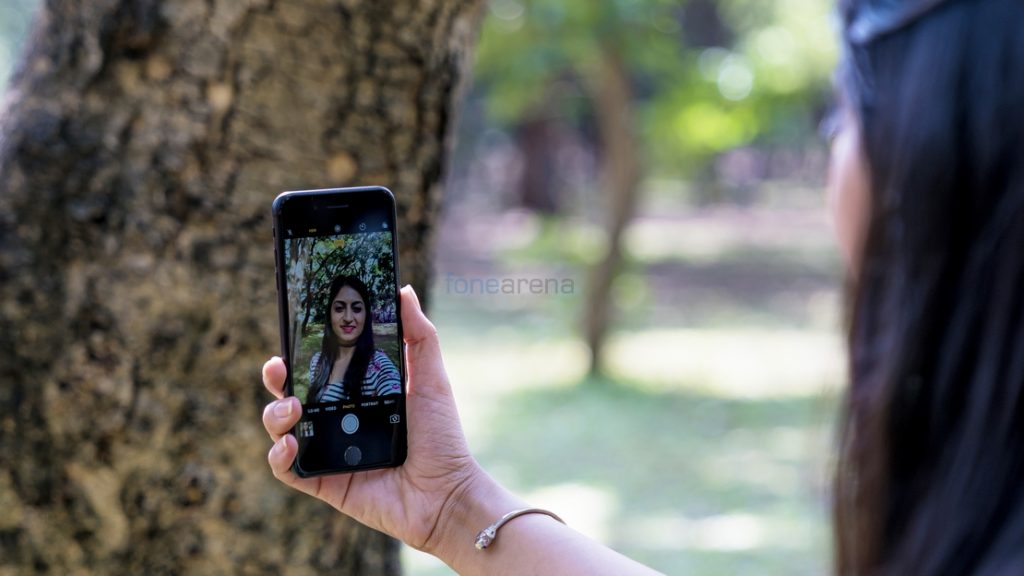 OPPO F1s has also added a large lens aperture of f2.0 for its front camera, which means that there is significantly more amount of light coming onto the sensor and more light being captured at any given instance by the camera. 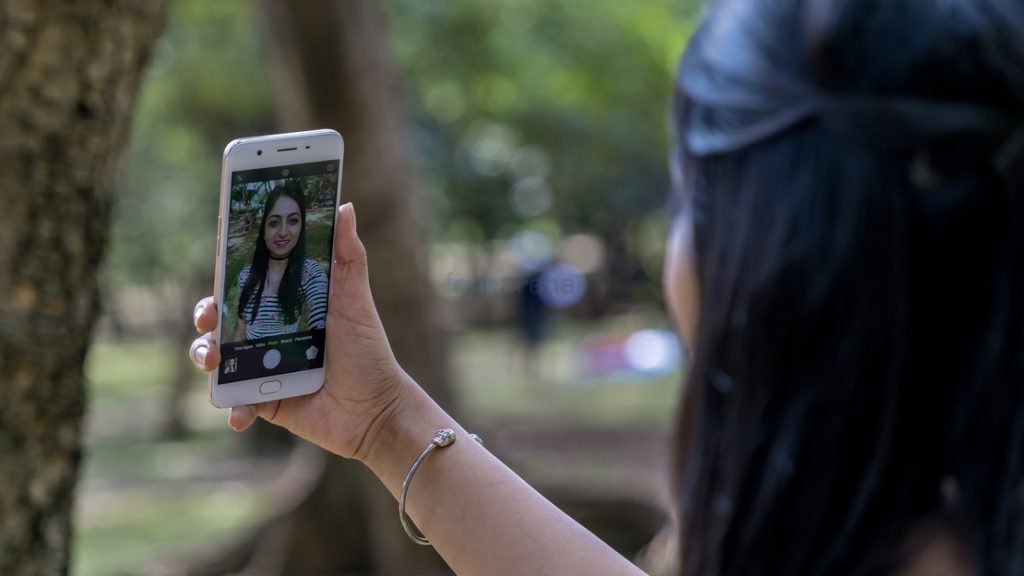 PHOTO PROCESSING ALGORITHMS: Last but not the least, a phone camera also needs good optimization on the software to make camera interface easier and more intuitive for the user. What good are the several settings features if a phone user can never find them on the phone! 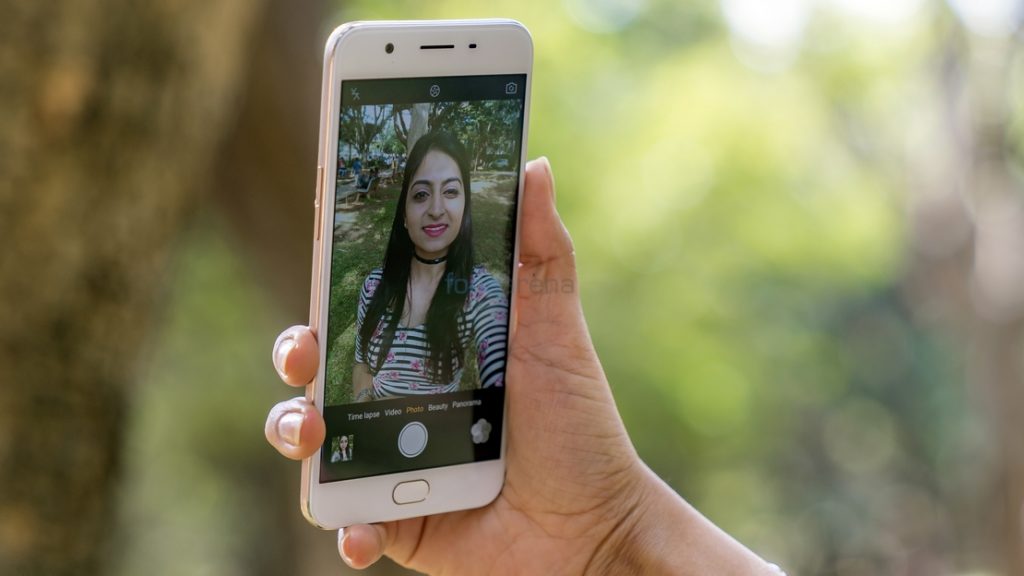 The F1s comes with several software features that allow you to get the best effects and quality for your selfies with easy to find settings. For example, the latest beautification feature— ‘Beautify 4.0’ was created after an extensive testing period of six months! There were 150 different versions of the software created before the best was finalized! 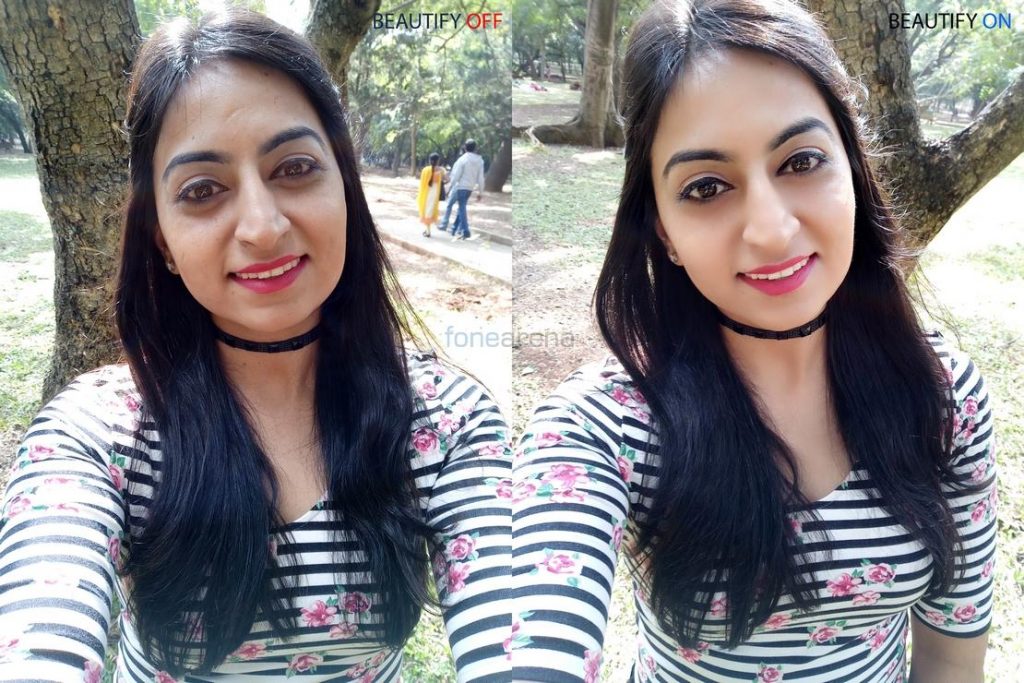 ‘Beautify 4.0’ allows users to capture their facial features in a brighter and clearer manner with more defined contours. It allows users to choose between 7 beautify levels and two skin tones along with improved photo processing to get the best possible results. 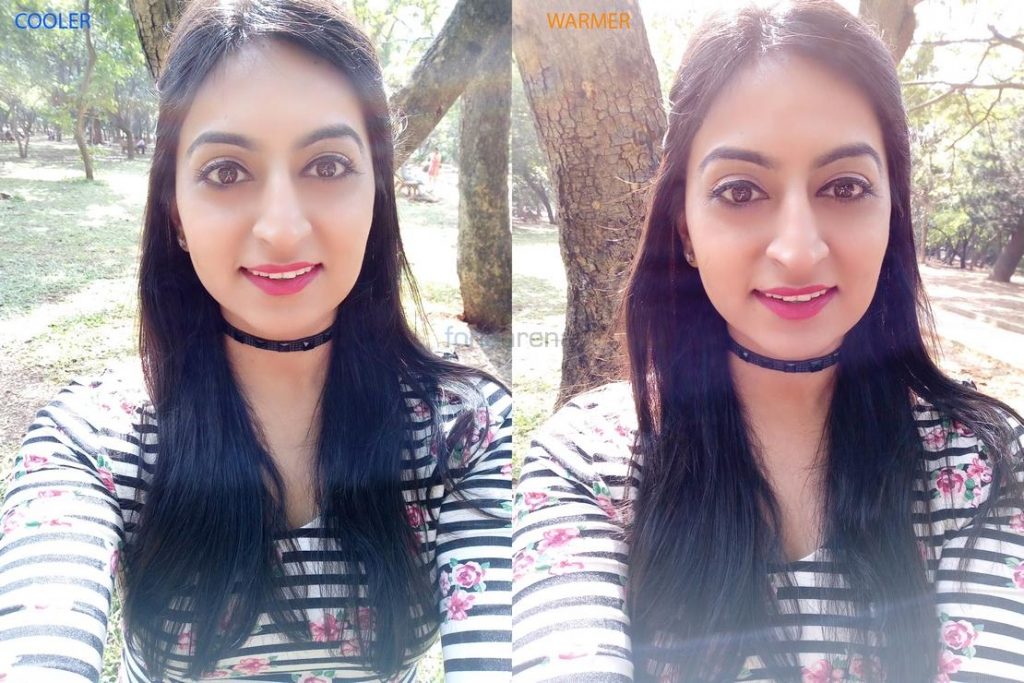 We’ll just leave you to decide with this comparison below. (OUR OBSERVATIONS : The photo on the left is taken with the S7 Edge from Samsung. You can see that the skin tone is really nice and the phone does a good job at making the skin look better. However, it is quite washed out with low contrast and blown-out highlights; the 5 Megapixels of resolution doesn’t really give enough detailing either. The photo on the right is taken with the iPhone 7 Plus which has much better detailing and the exposure as well as contrast are much better than the S7 Edge. However, it loses out on making the skin look better. The photo in the middle is taken with the OPPO F1s which brings in high level of detail thanks to the 16 Megapixel sensor. It has the best contrast of the three, good exposure and also manages to make the skin look much better than the other two. We even did a blind test where we asked people to guess which phone took what photo and most of them assumed that the one in the centre was captured with an iPhone 7 Plus or the S7 Edge since they are priced at a higher level and people expect better results from them)

This comparison helps us understand how it is impossible to state that one camera or selfie camera is better than the other simply by looking at the Megapixel count. You also have to take into account other metrics such as the sensor size, aperture and image processing to determine just how good a camera is. 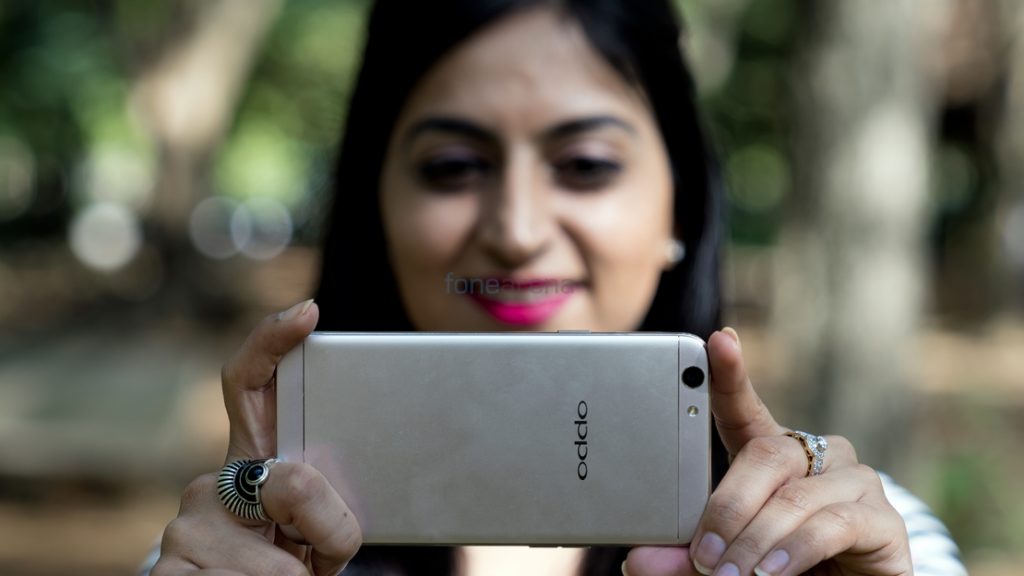