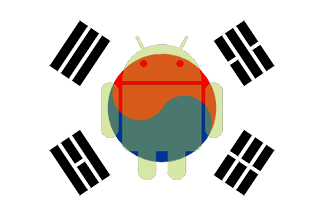 Today is a very big day for people who are enjoying their life with Android devices over in Republic of Korea, because the Android Market is now live in Korea, and now you have access to all Android apps in the market. Korean market is really huge, and it’s the home of the one of the well known mobile phones maker, Samsung. Samsung has sold more than 300,000 Samsung Galaxy S in Korea, and they also sold 1 million Samsung Wave all over the World. According to reports, Android Market has crossed a big mark of 70,000 apps. Near me, the day is not far when Android Market will cross 100,000 app, it’s just matter of time, and you will see Android Market leaving Apple App Store behind, Why? In a survey, Android developers are more in number as compared to Apple, which proves that Android will cross 100,000 apps sooner than expected. Recently, Google launched a very useful tool known as AppInventor, which will attracts people towards app developing too much, people who even don’t know how to do programming and coding, so you don’t need to start learning programming and coding if you want to develop apps for Android, because AppIventor is specially for you.