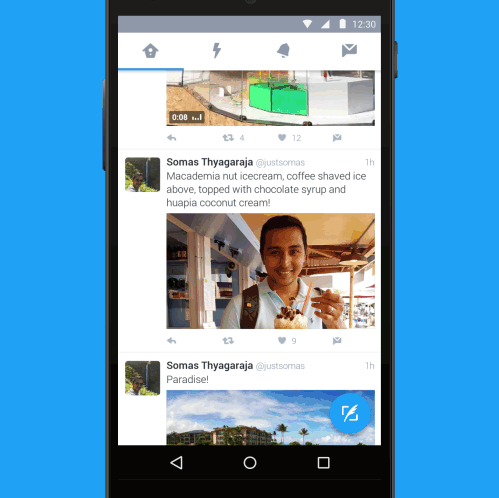 Twitter has overhauled it’s Android app with improved design and couple of much needed tweaks. The micro blogging site is bringing Material Design features which offers new look and feel to the Android app.

The redesigned Twitter app now makes it easier for users to move quickly between Home timeline, Notifications, Direct Messages, and more. The tab bars button at the top of the app have become larger. Twitter has taken down the tweet, camera and gallery buttons at the bottom of the screen.

Next up, there is an addition of new navigation menu that slides out from the side and lets you access your profile, Highlights, lists, the Connect tab, and settings. Finally, there is a new floating action button at the bottom of the screen that allows you compose a new tweet.

Twitter said that these latest features are rolling out to all users globally. Last month it was reported that Twitter was testing Night mode for Android app.