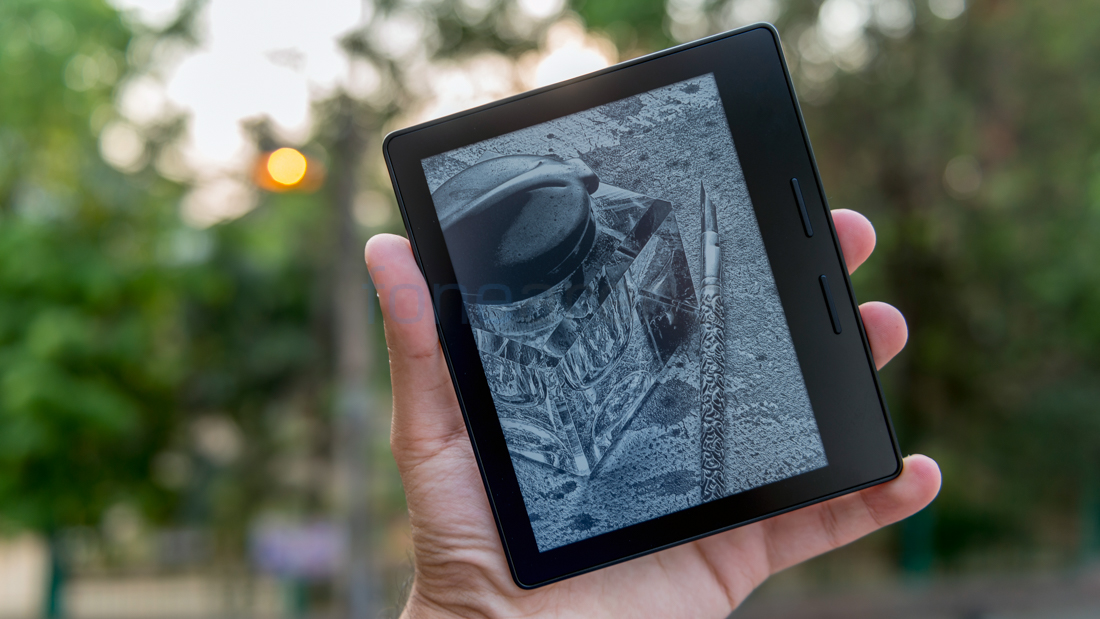 Amazon is back with an all new Kindle which is dubbed as Oasis. The eighth generation Kindle was launched in India earlier this month for a hefty price of Rs. 23,999 for the WiFi variant and Rs. 27,999 for the WiFi and 3G variant. The design shift from Amazon’s Paperwhite to Voyage was noticeable but not game changing. However, this time Amazon has given Oasis a major overhaul in terms of design and aesthetics. Along with a brand new design, does the flagship e-reader offer any new features? We have got our hands on the Kindle Oasis. Let’s see if it is worth the price tag in this review. 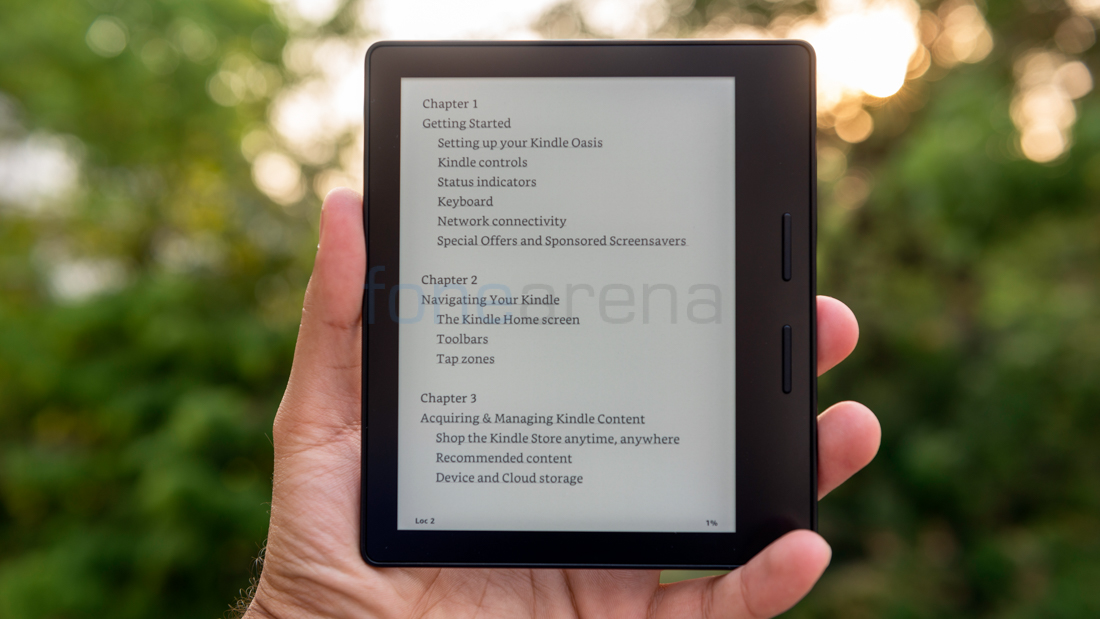 The moment you take the Kindle Oasis in you hand, first thing you will notice is its major design overhaul. Amazon has made radical design changes which sets the Oasis apart from all the previous iterations. We have seen Kindle adorn different looks over the years, however with Oasis, Amazon has taken it up a notch in terms of design. Firstly, the Oasis sports a different shape than its predecessors. This essentially means that Amazon has chucked the rectangular shape which we saw on Paperwhite (2013 and 2015) and the Voyage. Instead, the Oasis features a square shape that gives it a look of a small notebook. 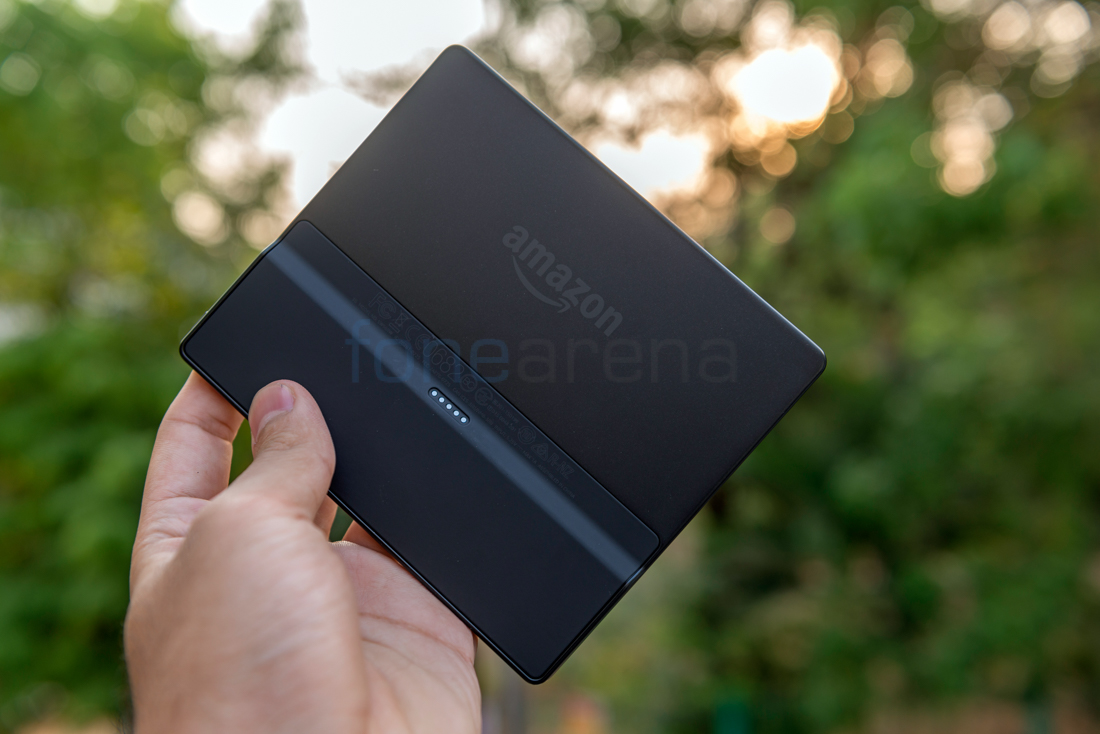 The Oasis boasts a bump on one side while the other side is thin, instead of a uniform, flat surface which we have seen on earlier e-readers. This bump offers a better grip to the device, while the thinner and lighter end enables the device to feel more natural in the hand. The Oasis is really compact which makes it comfortable to hold. However, if you have been a Kindle user for a long time, it might take some time for you to get adjusted to the bump on the device. The Amazon branding is present at the back while the strip of small round magnets is also seen on the right end of the bump.

Coming to how light the device is, well, let’s just say that Amazon has aced it in terms of the weight of the Oasis. It is also the thinnest and lightest Kindle ever made with the thinnest point at just 3.4mm (to 8.5 mm) and weight is mere 131 grams for WiFi variant and 133 g for Wi-Fi + 3G variant.

I have been using a Paperwhite (2013) for two years now and when you compare it with the Oasis you can easily see and feel how thin and crisp the latter is. The Oasis is over 20% lighter and 30% thinner on average than any other Kindles. The handgrip tapers to an ultrathin 0.13” display so you can read comfortably for hours. Just for a quick reminder, the Paperwhite (2013 and 2015) were 9.1mm thick while the Voyage was 7.1mm thick. Hence, the 3.4mm thickness just feels insane and takes some time for you to actually come in terms with its sleekness.

Amazon says that the body of the Kindle Oasis has been crafted using a process known as structural electroplating which is a technique that enables to create a single sheet of metal that is denser in certain areas than others. This gives the device more protection in spots that may be prone to damage while maintaining a thin overall profile.

Amazon is bringing back the physical buttons with Oasis and they are present on the hand grip that allows you to turn pages. The Oasis is also the first Kindle to include an accelerometer which helps it recognize when the Oasis is flipped over and automatically changes the orientation of the page accordingly. By default, the top button is for page forward while the bottom one is for previous page. You can even configure these buttons by reversing the function from the settings.

I believe  the addition of the physical buttons is a welcome move as they come in handy while reading the Oasis with one-hand. You can easily hit them with your thumb without having to shuffle the device around in your hand. Also, those who are not a fan of physical buttons can still turn pages by swiping right and left similar to older versions.

The power button and micro USB port are present at one of the end of the device (as top or bottom depends in which hand you hold it). There is a LED indicator at the left corner of the power button that glows in orange when the Kindle is charging and glows in green when the charge is full. 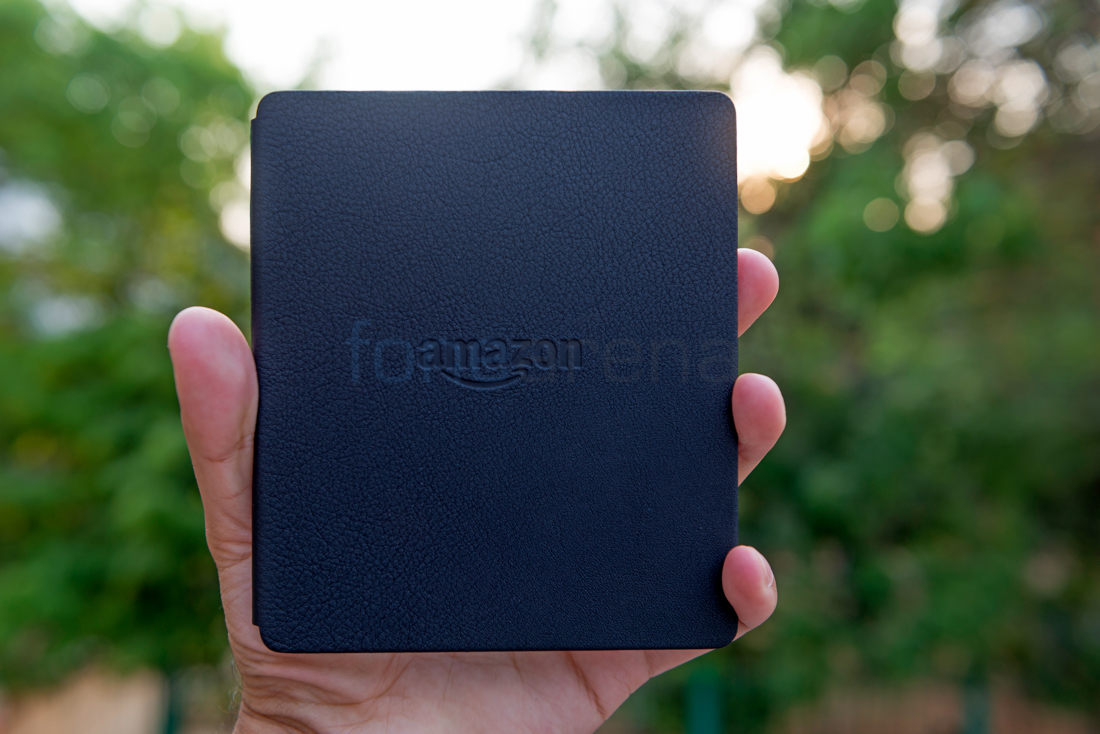 The Kindle Oasis has a dual-battery system. As soon as you connect the cover to Kindle Oasis, the battery in the cover begins recharging Kindle Oasis automatically. You can charge the device and cover simultaneously while both are snapped together and plugged in. The leather cover feels premium, has soft touch and comes in black, merlot, or walnut colors. It has the trademark Amazon branding at the front and on the inside as well. There are six tiny magnets at the back of the Oasis and other six of them are present on the leather cover. Therefore, with 12 magnets holding it in place, the battery case feels perfectly secure when it’s locked in place. 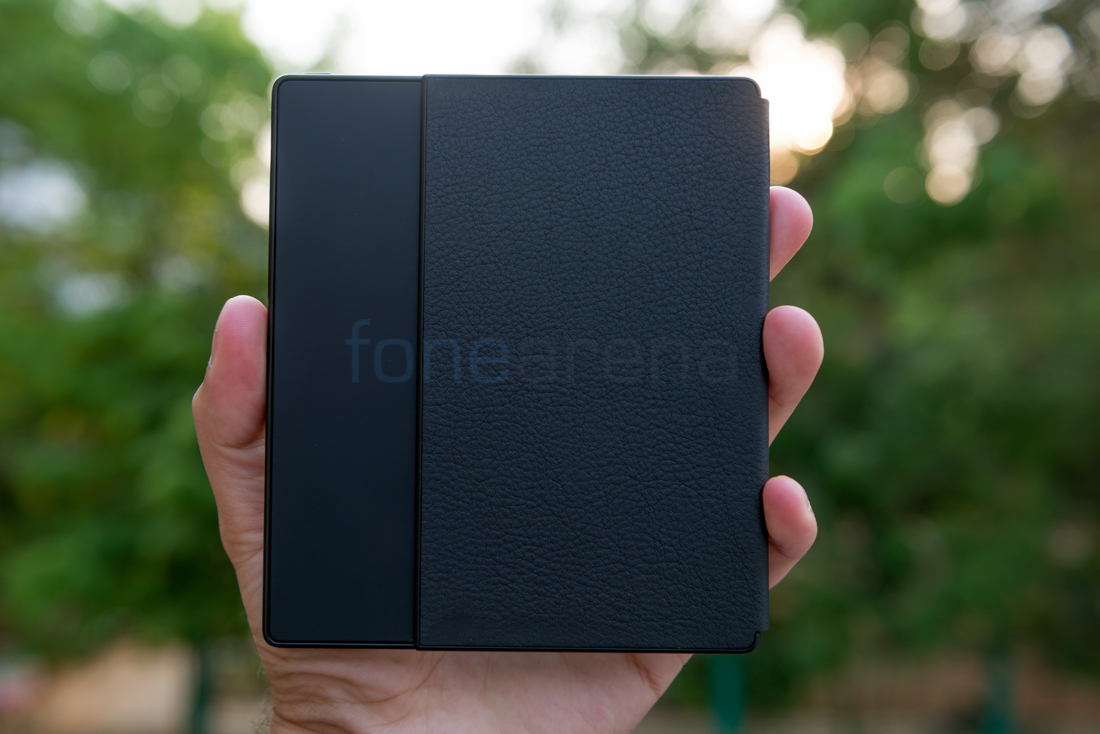 However, without the leather cover, I felt the Oasis is too delicate and needs to be handled a bit carefully. Also, similar to previous iterations, the back is still prone to fingerprint smudges. But then again, it is not a major concern as it is more likely that one would use the device with the leather cover. The cover sports a magnetic latch, which puts the Kindle to sleep when it is closed and wakes up at the time of opening. It also has a new hibernation mode that minimizes power consumption when your Kindle is inactive. Amazon claims that the battery will now last for eight weeks thanks to the leather case that provides additional power when it’s snapped into the Oasis.

I believe that reading experience for a longer time is better without the cover but in case you are travelling or are not reading in a very homely environment, it is better to add the cover for better protection and handling. 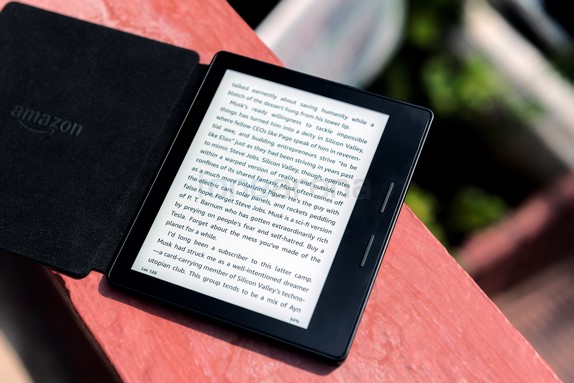 Coming to the display, the Oasis sports the same 6-inch touch screen display with a resolution of 1448 × 1072 pixels and a pixel density of 300 ppi we saw on the 2014’s Kindle Voyage. However, the Oasis rocks 60 percent more LEDs to give it a wider range of brightness for various reading environments. The display comes with new “cylindrical diffractive patterns” that improve the spread of light. The display is bright clear and will in no way strain your eyes. The lights are positioned in the side of the device, rather than the bottom, which creates more consistency in the lighting across the display. However, the Oasis lacks ambient light sensor for auto brightness that was present on the Voyage which is a let down.

The UI on the Oasis has also been refreshed and is minimalistic and cleaner. The top bar houses the home icon, back key, brightness controller, Goodreads, and Kindle Store in one section. While the Search option is just next to it along with the magnifying glass icon. All these icons have got a makeover and looks slimmer. The hamburger menu with three horizontal line at the top right corner has been changed to three simple vertical dots. In case of earlier versions of the Kindle, all the icons in the menu were bigger in size and bolder in color too. 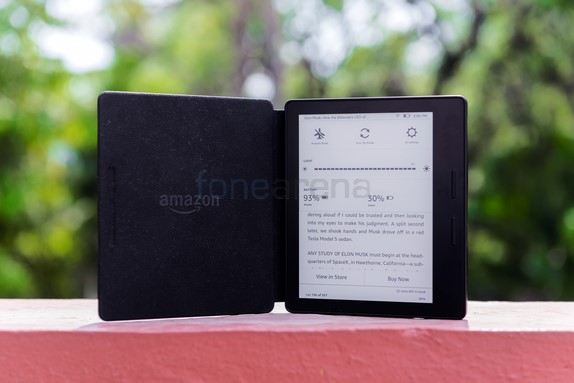 The grid layout is still there but now the top part now focuses on what you are reading currently while a new section titleed ‘My Reading Lists’ and ‘Find books you want to read section’ is present on the right side. Tapping on it, the Kindle will help you get free samples and personalized recommendations as per your liking. You will have to select few genres from various sections like Action & Adventure, History, Sports, Health, Business and so on. The bottom grid also suggests few titles. The keyboard layout has also been refreshed as now instead of boxed individual letters, the QWERTY keyboard is similar to regular keyboards with spacing. 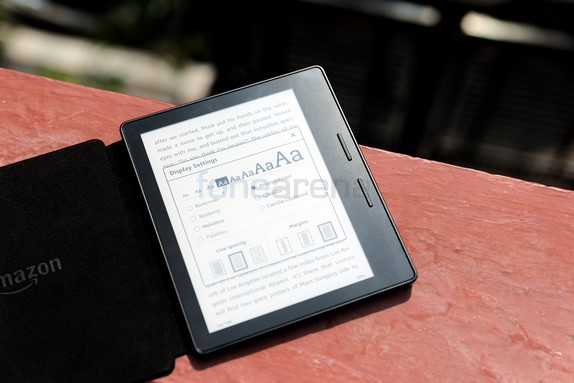 With the Oasis, Amazon has introduced a new Ember typeface which similar to the device is sleek. The font can be adjusted through eight sizes, while line-spacing and margins can all be adjusted. It also has Goodreads integration similar to the predecessors.  X-Ray, built-in dictionary, Wikipedia and the usual features are also present on the Oasis.

Similar to previous iterations, the Oasis can read a range of e-book formats such as Kindle Format 8 (AZW3), Kindle (AZW), TXT, PDF, unprotected MOBI and PRC natively. You can send HTML, DOC, DOCX, JPEG, GIF, PNG, BMP files to your Kindle email to get them converted and delivered to your Kindle. The Oasis comes with a new hibernation mode that minimizes power consumption when your Kindle is inactive. It has WiFi 802.11 b/g/n support and 4GB of storage out of which you get 2,742MB free.

In case of performance, navigation, searching books from the web, typing on the keyboard all these actions are good. The page turning is also fast. However, a faster processor could have been a welcome addition to the Oasis.

The Kindle Oasis is a gorgeous, compact e-reader and scores when it comes to the design and form factor. It also wins in the terms of display which is definitely brighter than the Voyage and it is safe to say that long reading hours on Oasis will not strain your eyes. Coming to the software, I personally like the additions of the auto-rotation feature and new Ember typeface which gives it the much-needed edge over its predecessors. However, a couple of new features on the software front would have been welcomed. The leather cover with built-in battery is a great addition which provides extra juice to the Oasis and also makes it easy to handle.

Next up, considering the name ‘Oasis’, it was expected that Amazon will make it waterproof but unfortunately this is not the case. Other e-readers in the market like Kobo, which is not a popular device had a waterproof e-reader since 2014. Even the latest e-reader from Nook was waterproof.  To sum up, Kindle Oasis does offer a premium e-reading experience but at a premium pricing and I feel Amazon fails to justify the price tag on its flagship e-reader.