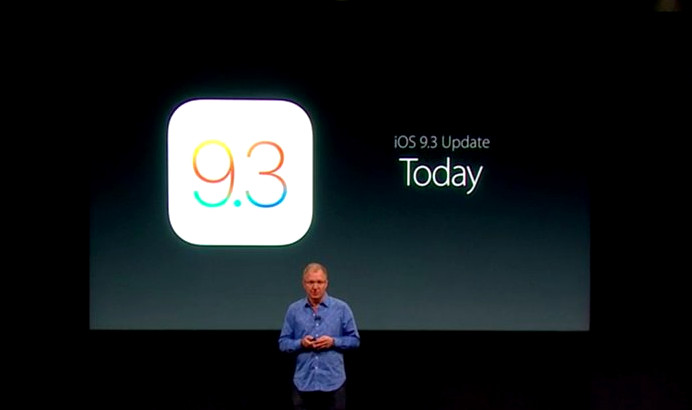 Apple has announced that iOS 9.3 update will be available for download for iPhone and iPad starting today. The latest version of OS was available for testers since January.

One of the most important features of iOS 9.3 update is the Night Shift feature that shifts the color temperature of the display based on the time and location of your device. Other features in the update include improving security for Notes app with the inclusion of Touch ID multi-user support for iOS. The Apple News app has become faster with more personalized with top-story support, along with suggestions, trending topics, and editor’s picks. The update adds more Quick Actions for 3D Touch and encrypted iCloud backups.

The Apple Health app now makes it easier to find third-party apps to track your health. Weight, workouts, and sleep categories get a new slider menu that reveals great apps you can easily add to your Health dashboard. In addition, the app now displays your move, exercise, and stand data, as well as your goals, from Apple Watch. The CarPlay is getting new features such as “Nearby” for Apple Maps that shows everything around you and also offers new music recommendation features in Apple Music. Check out all the detailed iOS 9.3 features here.

iOS 9.3 will be available as an over-the-air update later today. You can also update via iTunes.