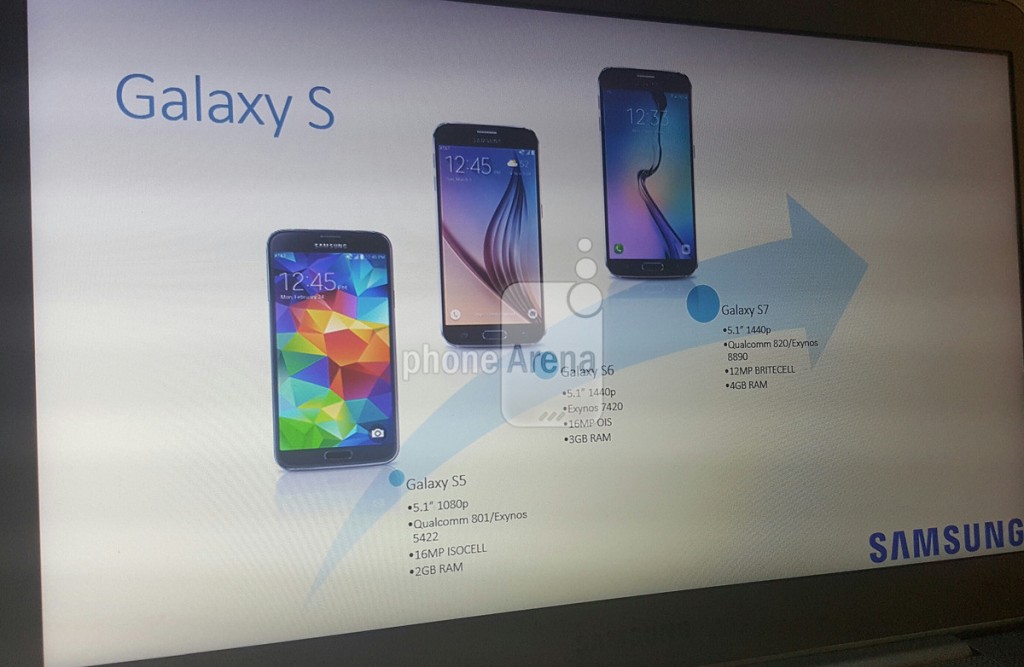 The specifications of the upcoming Samsung Galaxy S7 have been rumoured for quite a while and the information gathered from many sources seems to indicate the same things. However, now a new presentation slide has been leaked online that could possibly confirm the specifications for good.

The Galaxy S7 specifications shown on the slide are pretty much in line with the previous rumours itself. It will have a 5.1″ 1440p display and the S7 edge will have a similar display with dual-curved edges.

The device will be available in either a Qualcomm Snapdragon 820 powered variant or Samsung’s own Exynos 8890 variant. These two variants have been spotted on benchmarks in the recent past as well. There will also be 4GB of RAM on board which is an upgrade from the Galaxy S6 and S6 edge.

Finally, the camera is a 12 Megapixel BRITECELL sensor which is a step down in terms of resolution but should feature much improved low light performance performance and image quality. The slide doesn’t reveal any more specifications. Some of the aspects of the phone especially in relation to the USB port and waterproofing are still left unanswered. The S7 was rumoured to sport a USB Type-C port and bring back the waterproofing abilities of the Galaxy S5. Only time will tell what the device is packing.

The Samsung Galaxy S7 and S7 edge are expected to be revealed next month during MWC 2016 in Barcelona. There is a chance that we could see the S7 edge+ launch also alongside but a recent rumour suggests otherwise.